originally posted by: visitedbythem
I wonder who has the Alan wrench that fits that

Saturn was the god of agriculture.

Bees are responsible for most of the insect pollinization of crops.

A close up of the spot at the center...


Wow thanks for that. Amazing

originally posted by: dreamingawake
Nice capture of Saturn's form. Would have been a fun shot to see in color.


It was taken in infrared (specifically, at the wavelength emitted by methane), so it wouldn't be your usual colours.

Cassini usually takes such images at two different methane wavelengths, which allows to create a false-colour image, like this one I just made: 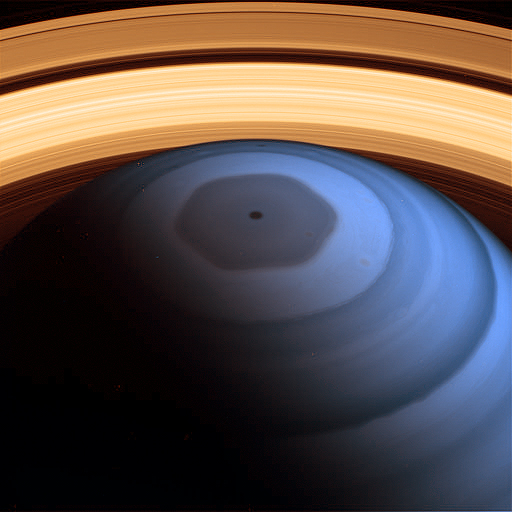 Here's a spectacular upclose (in broad infrared spectrum) of the hexagon and the storm in the middle: saturn.jpl.nasa.gov... 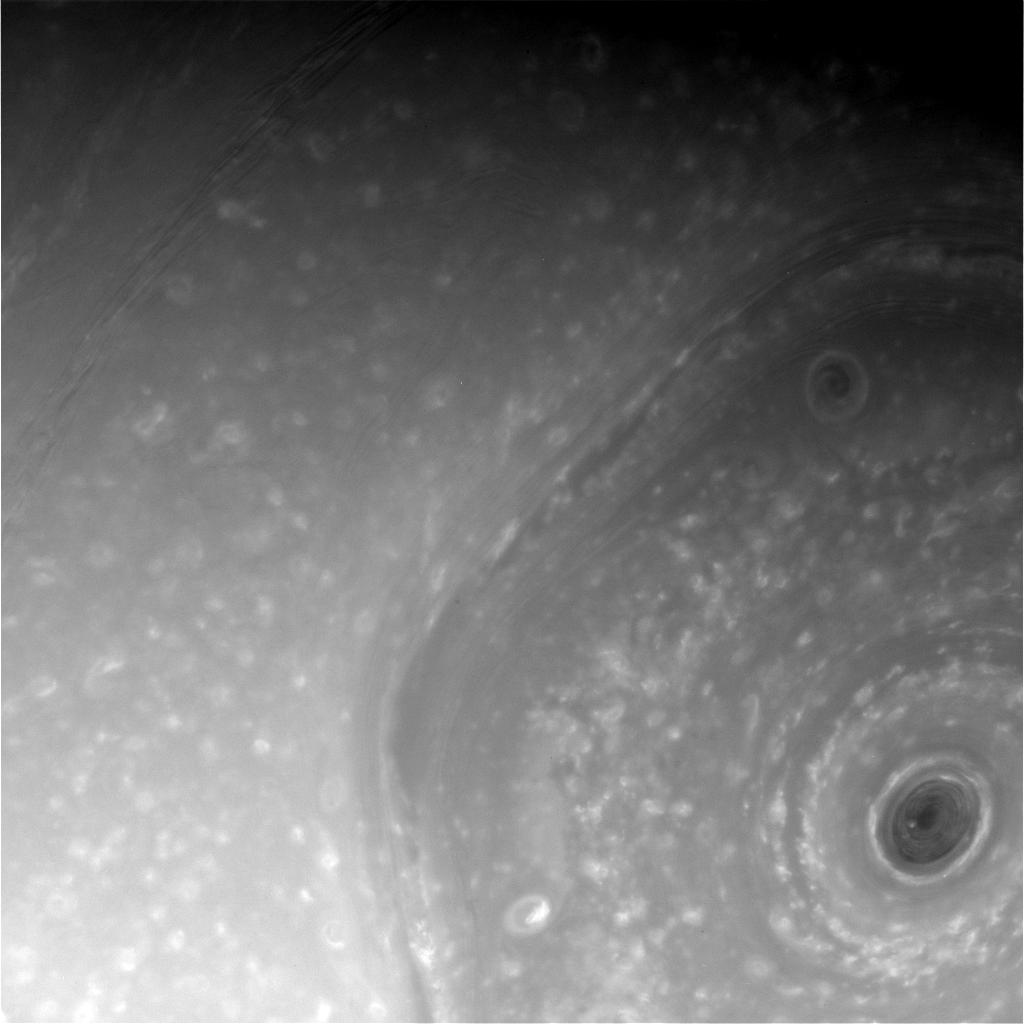 And I've just made this, in true-colour visible light this time (RGB composite) 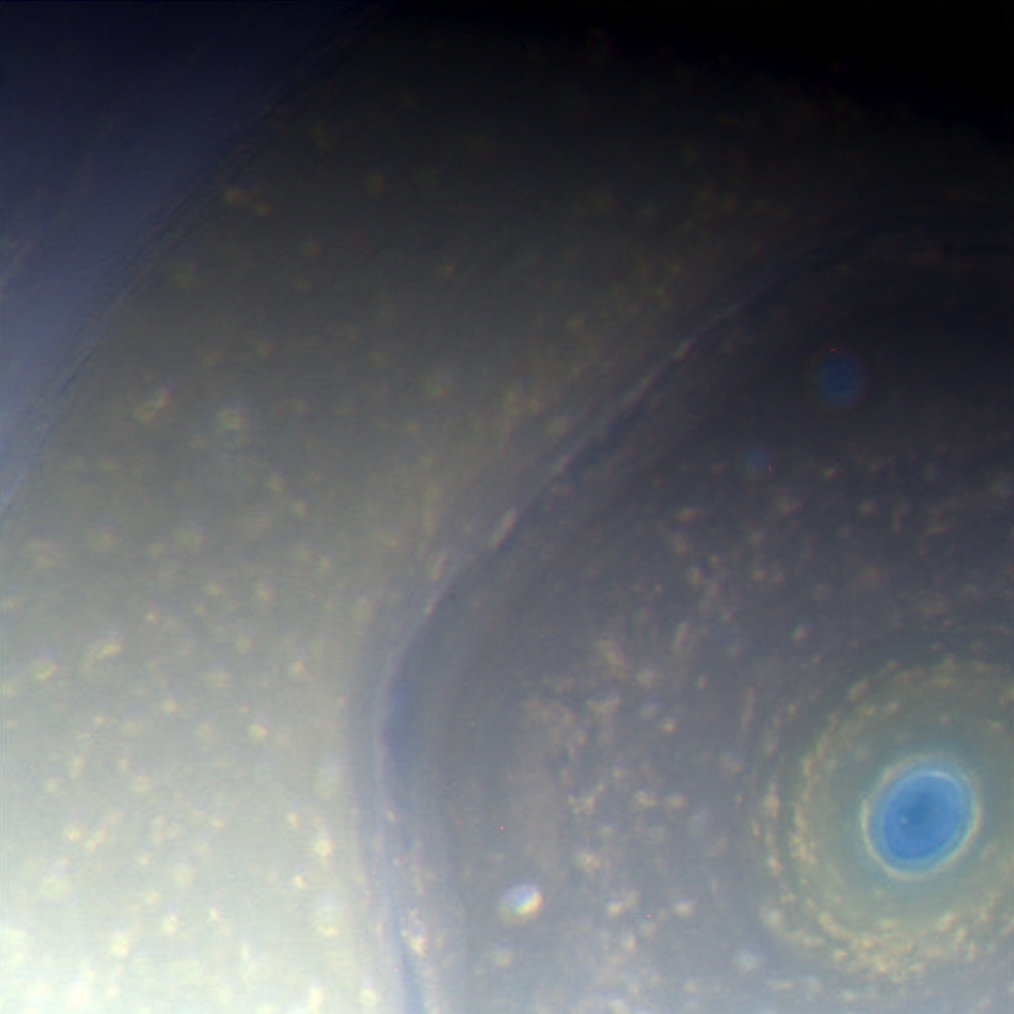 Tanks for gracing the boards wth your work. Always appreciated.

Closer close ups of the rings will come next year...

On April 22, Cassini will fly close to Titan, whose gravity will reshape the probe's orbit such that it zooms between Saturn and its innermost ring, which lies just 1,500 miles (2,400 km) from the planet.

Cassini will then make 22 plunges through this gap during the "Grand Finale" phase of its mission, which will conclude with an intentional death dive into Saturn's thick atmosphere on Sept. 15, 2017.

originally posted by: Astrocyte
a reply to: gortex

That is a truly wondrous image. Especially with the associated metaphysical ideas around Saturn, typically accorded the status of "7th" of the 7 "planets". Does the Hexagon and the black core reflect the 6 directions of space and the mystery of time? That would seem to be the suggested meaning, if you thought about it in metaphysical language, that is.

It's hard to believe that this isn't an artists rendition - but an actual reproduction of what our satellites are picking up, decoding with computers, and reconstructed back on Earth into this image. Furthermore, its been argued by theory of life researchers like Mae Wan Ho that life operates at the level of infrared light, because infrared light is the wavelength that generates large and coherent exclusion zones in water - the electrical conduction medium that the body actually operates through and generates quantum coherent order upon.

Maybe theres something essentially "meaningful' about the activity of radiation at these wavelengths.
[/quote

Water does not conduct electricity.
edit on 28122016 by trisvonbis because: Chivas.


originally posted by: HeywoodFloyd
I don't buy the NASA explanation of the weird hexagonal shape at the North Pole of Saturn.

The hexagon is the most energetically-favourable configuration possible when something either tries to expand into the resisting area, or is pushed inside by that resisting area.

Nature has already produced the spcimens thereof - bees' honeycombs and Giant's causewa, so who are you to argue agains that?

Exactly. There is no CGI needed because hexagons can and do occur in nature, such as that spinning fluid in the video you posted.

Atmospheric gasses behave physically like fluids, so that video is a good analogy to what may be happening at Saturn's pole.


I knew that, therefore my posting. Thank you anyway, for I am the one who should have explained this

P.S. Replaced in my mind "water" with "electricity"
edit on 28122016 by trisvonbis because: Chivas (some more)


originally posted by: gortex
Thanks to its course change ahead of the orbiters Grand Finale and the approach of Saturn's northern hemisphere Summer solstice the image shows the Hexagonal North Pole bathed in Sunlight , the picture also gives a great view of the inner rings. 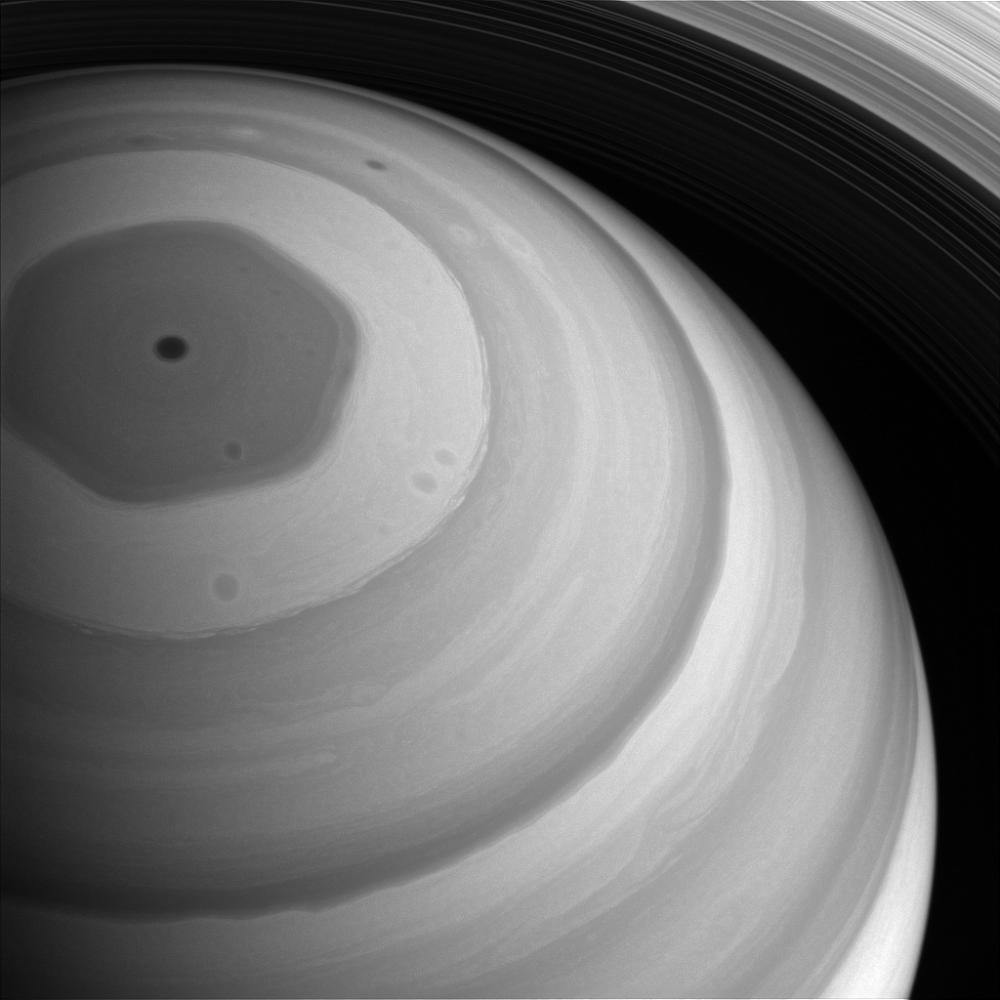 The hexagon-shaped jet-stream is fully illuminated here. In this image, the planet appears darker in regions where the cloud deck is lower, such the region interior to the hexagon. Mission experts on Saturn's atmosphere are taking advantage of the season and Cassini's favorable viewing geometry to study this and other weather patterns as Saturn's northern hemisphere approaches Summer solstice.
This view looks toward the sunlit side of the rings from about 51 degrees above the ring plane. The image was taken with the Cassini spacecraft wide-angle camera on Sept. 9, 2016 using a spectral filter which preferentially admits wavelengths of near-infrared light centered at 728 nanometers
photojournal.jpl.nasa.gov...

everytime They need to vampire human energy for something... then they come with their 'saturn pictures'... - people are too Stumped these days, to see it's but CGI

sorry..what? why would they even bother using 'cgi' to fake a planetary image.

Awesome thanks for those!

posted on Dec, 28 2016 @ 08:24 PM
link
'a giant spaceship on the top center, and what looks like massive structures under the surface'


Your Talking about Memories!

Genetic Memory: How We Know Things We Never Learned
blogs.scientificamerican.com...


It all about Sequence Frequency GEO patterns in this Case...

Actually its Cymatics that is Involved ... Vibrations in Frequency in the Cosmos ..

Cymatics reveals a strange & beautiful symmetry at work in nature. Inspired by the work of Dr Hans Jenny we create images using water and sound. Our images mirror the symmetries found throughout the natural world, from the hidden shapes buried within snowflakes to the massive hexagonal cloud formations found on Saturn. Cymatics.org is a gallery of our work and a resource for other artists

A circe (or sphere in 3D) is said to be the most area-efficient shape, but cramming many circles together is not efficient because of the gaps. The hexagon solves that problem. In fact, I've read somewhere that each honeycomb cell starts out as a circle, but morphs into a hexagon as it's built up.

This article suggests that the hexagonal formation of the honeycomb is purely mechanical and has nothing to do with the bees' genes or instincts.


Using a honeycomb grown at a research facility in Beijing, the researchers were able to carefully ward off the bees and photograph the bare honeycomb seconds after formation, providing the first clear evidence that cells naturally start as circles. They then observed honeybees heating the wax after the initial cell formation — a phenomenon identified in previous studies, but never analyzed in close detail — and found this to be the key step in hexagon-formation.

By heating the cells, the bees cause the wax to become molten and flow like lava. Once the wax starts flowing, the cell walls naturally fall flat and take on the shape of a hexagon, like adjoining bubbles in a bath. This is physically the simplest and most stable way for cylinders to merge, Karihaloo said.


Ok The is way off Topic of this Thread .. So PM me and we can Discuss this further ..

a Single Queen Controls All... The Hive is Built by instinct ( Genetic Memories ) ..

Its True that Bees wasps Ants do Learn and are Taught .. but mostly Directions of Territory and Food ..

Speaking of Which Monarch Butter Flies from the North America Travel Down all the way to Mexico but when they come back,, its not them ... it their 3rd generation offspring . that does

you take a newborn Puppy ( Canine ) and take care of it seeing it Mother Dies after its Birth ,, you Raise it

you teach to go out side ... to relive itself ... you See it goes around Circles Clockwise then does its Duty...
then !! you see it get back up and starts kicking and throwing Dirt with its kind Legs .. to cover up its Waste!

It was never Taught ! by its Adopted Human Parent.. and never Seen another Canine, yet it knows ...

Thats Program genetic Memories, aka Instinct within the Gene/DNA

Some Scientist claim the Honey comb Design is a Perfect .. and Stable and keeping it way from Gaps
some say it start with circles then form into Hexagons.. the exact design .. How would the Bee Worker/Drone
Would of Known this ?? How does it Know if its Original Single Source ( Queen ) was never Taught.. either..

IMO,, Its Genetically Programmed... like a Pre programmed Factory Setting .. in Mechanical electronic Devices ...
made by man .. Speaking of Man , MAN can do this with Genetic Engineering as of Now ...

the Saturn hexagon is simply more of a Cymatic Frequency..