Do you live in a bubble? New study and quiz attempts to answer

I came across an interesting article that also contained a simple quiz...

Do you live in a bubble? There exists a new upper class that’s completely disconnected from the average white American and American culture at large, argues Charles Murray, a libertarian political scientist and author.

There's been a lot of talk this recent election about a disconnect between people in America. The quiz is by an author who's written a book about this phenomena:

The more important point is that the top few percentiles are crucial for understanding our divided cultures. By definition, a country of 322 million people has 6.44 million people in the top two percentiles of socioeconomic status. Those people in the top few percentiles include almost all of those who run the nation’s culture, economy and politics. What happens when we focus in on them? What happens when we look at the difference between the effects of growing up in an elite ZIP code and the effects of living in one as an adult? What about people who have lived in such ZIP codes all their lives? The graph doesn’t give us much in the way of answers, but it raises all sorts of intriguing questions. More soon. 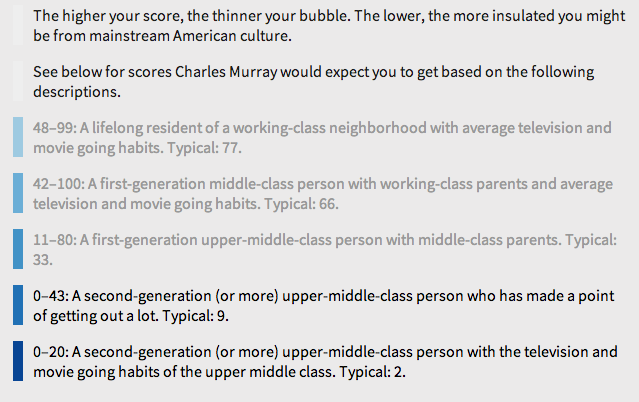 Argh. These tests are pointless/kooky according to me. I took it and got a score of 1 and for the last 11 years have been secretly residing in some strangers shed in a hole i dug up covered with plywood. But my Picasso collection is quite exquisite if you don't mind my bragging.
edit on 18-11-2016 by SPHARAOH because: Got called on for incorrect usage of a word and removed it.

Biased? What would be the agenda in this case? To be biased, there has to be an agenda.

I figured this wouldn't be terribly controversial since it was created by a self-declared Libertarian.

I scored a 33 -- first generation upper-middle class with middle class parents, which is true.

originally posted by: Kettu
a reply to: SPHARAOH

Biased? What would be the agenda in this case? To be biased, there has to be an agenda.

I figured this wouldn't be terribly controversial since it was created by a self-declared Libertarian.

You're right i shouldn't have used the word biased. I will remove it from my post. Sometimes i just assume things and sometimes i am wrong.

I really didn't think it was controversial in any way FYI
And i don't care about left right up or down alt this or #anything.

I honestly did take the test and it was wrong.

But interesting nonetheless. Thanks Kettu.


PPS Technically it IS biased i don't see generation or multi generation living below the poverty line. With and without movement to other classes.
I could nitpick some more but i think i made my point.

I feel like a cheap whore for kowtowing so quickly and without instant thought. Oh well live and learn.

posted on Nov, 18 2016 @ 02:54 AM
link
Has anybody realized that by participating in these online tests and survey polls they are contributing data to further the expansion of bubbles. And whose results will be printed in some second-rate magazines and worthless blogs for consumption by the walking dead.

originally posted by: Kettu
No, not a biological contamination bubble! A culture bubble!

posted on Nov, 18 2016 @ 05:04 PM
link
Wow that quiz was awful. Basically it correlates a disdain for the Kim Kardashian and/or ultra liberal culture as being very wealthy and in a bubble.

It was so far off it's laughable.