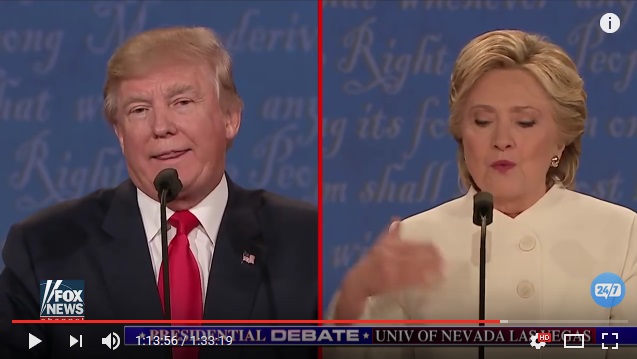 Do people normally look down dozens of times per minute while talking? Does Hillary?

Several times last night I got the impression she was reading printed notes. 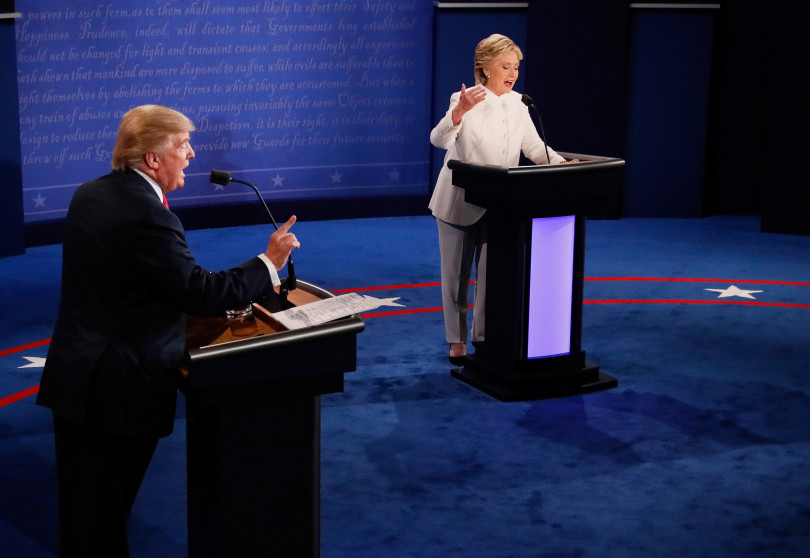 On social media people sure were talking about 'why the F is she nodding' type discussions and comments.

Just now I opened a video for replay for the first time, skipped to 50:40 (at random) and she her looking down constantly. I skip around at random and it keeps happening.

Didn't find too much about 'prepared notes' via the Google, although this page has some images of an odd fellow collecting her notes afters the Lester Holt rigged debate:
70news.wordpress.com... rump/

And from this photo I found her notepad looks legit: 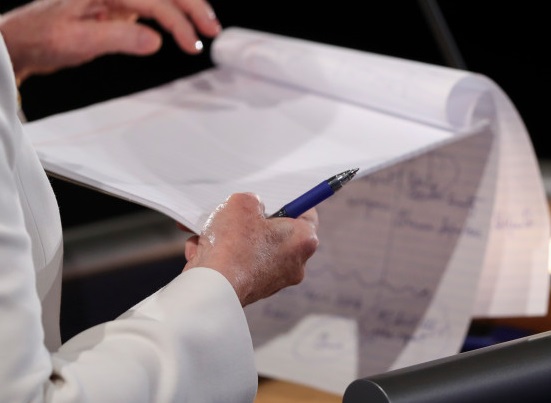 But this has me even more puzzled now, as if she was reading a script the whole time that would at least explain the compulsive behavior. If there were only random jotts & scribbles then what gives? 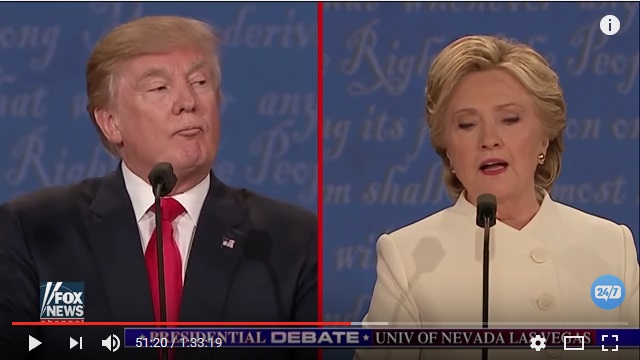 She most likely had a bug in her ear and was being fed what to spew out of her incoherent mouth.
s/f

Your thread is bizarre. You introduce a conspiracy theory that Clinton is reading from a script (these narratives that a debate could be scripted are impossible to say the least, but whatever) do to some head bobbing that you've arbitrarily decided is too much head bobbing. THEN you proceed to disprove the conspiracy theory by posting a picture which shows that her notepad is legit and even admitting that the notepad is legit. And finally you STILL assert the CT is true after having disproved your own evidence.

Really not much to say here except GREAT mental gymnastics.

posted on Oct, 20 2016 @ 01:47 PM
link
Interestingly trump is claiming that she was given a list of the questions before the start of the debate.

posted on Oct, 20 2016 @ 01:48 PM
link
I asked this very question on here last night during the debate. She does look down frequently, but it's while she's answering questions. That's what makes it suspicious. Maybe it was nothing. Maybe there is something to it. That's the point of making posts on here. To explain and discuss and get others opinions.

posted on Oct, 20 2016 @ 01:50 PM
link
She was doing exactly what they tell you not to when speaking to groups, looking down at your notes. My hunch is she had each topic on her notepad with pre-prepared lines and talking points. The topics were given ahead of time, but with the msms romance with her I'm sure it's not hard to get the exact questions before. That being said, she had a really hard time actually answering any of the questions directly, which is why the moderator kept interrupting her.

I'm not trying to prove anything just calling into question what the hell was wrong with her. My point is it would make sense if she were reading a script, but since it doesn't appear to be the case its even ore bizarre.

I didn't set out to write an article here.

But hey, good job, you should make an even longer paragraph trying to describe how bizarre my silly little thread is, and maybe that will somehow take away from why she was doing the bobble head most of the time.

So she was bobbing her head. Is that against the rules?

For Trump supporters everything Hilary says and does is against the rules and totally wrong, a abomination of humanity with the goal of awakening Satan

Just like for Hilary supporters everything he does is either racist, homophobic, xenophobic or sexist

If you're mentally retarded it might be against the rules to be POTUS. I think that would fall under the 'unwritten rules'.

Although I suppose tourette's syndrome wouldn't count as such.
edit on 20-10-2016 by IgnoranceIsntBlisss because: (no reason given)

You know dyslexia can be considered mental retardation, JFK was supposedly dyslexic.

And what does that have to do with head bobbing?

posted on Oct, 20 2016 @ 01:58 PM
link
There was also a lot of discussion that "Robo-Hillary" was back, again referring to how it looked like she was reading a prepared statement, not trying to think on her feet.

You know i can also move my head and talk at the same time. Strange i know, but true.

Now, you do realise that you are basically trying to build up a conspiracy hear because Hilary moved her head a little more than you would have liked???
edit on 20-10-2016 by OtherSideOfTheCoin because: (no reason given)

Why should I explain the bobbing? I'm not the one who has a problem with it. Sounds like you are running out of attacks to lob at her for your flimsy thread here, so you are deflecting to me like I should support your craziness.
edit on 20-10-2016 by Krazysh0t because: (no reason given)