Oh hey, from the other thread I did..."Was Hillary actually in Greensboro?"


This picture was posted as "Proof" apparently, that she was there, and everything was Kosher. My only question is why the need to fake footage??

How much of our media is real? Do we allow some faking, total faking, just a smidgen? What amount of faking is A-OKAY with us peons? And, fine, okay, she was there, but why oh why do they need to FAKE FOOTAGE?

Please join up and go through the Greensboro footage, everything you can find. There are high res photos from Getty kicking around as well. Though none of the crowds. The only crowd shots are low res, from what I can find. But lets compare "PROOF" photos shall we?

Heavy.com "the photos you need to see (LOL) 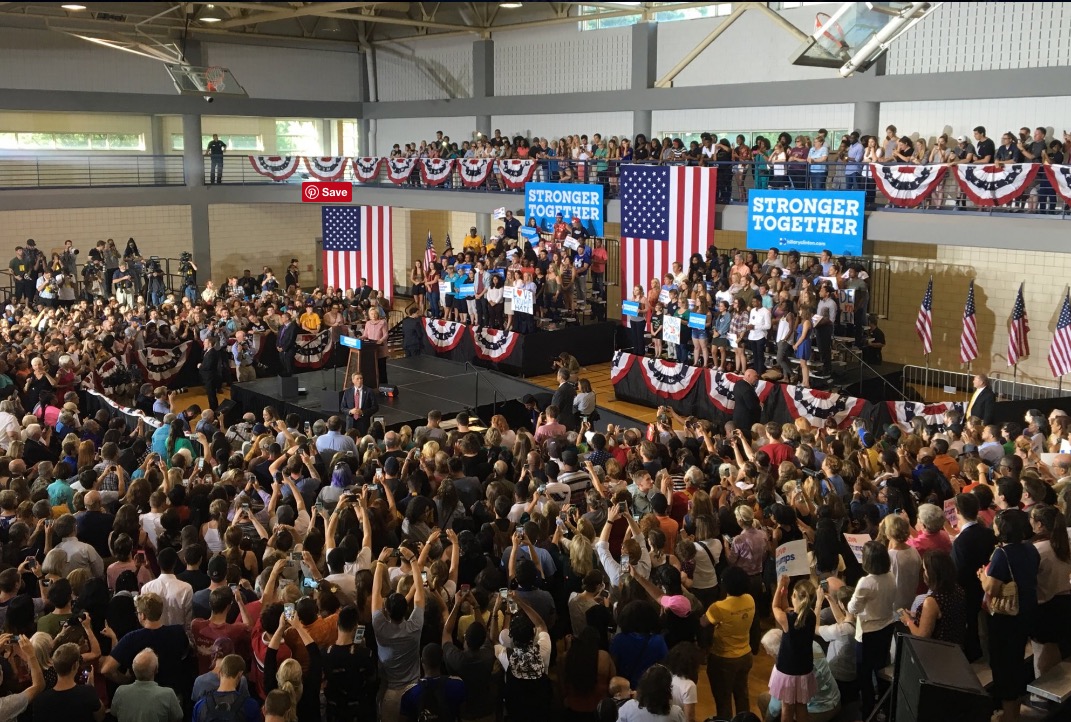 I think it could be, MAYBE, the same crowd, but IM not sure. They did make the people in the stands kinda match, sort of. I don't know. With the other footage being faked how do you know what's real? Maybe the entire crowd is the same because they are fake, and its an augmented reality system everyone is linked in to!?? 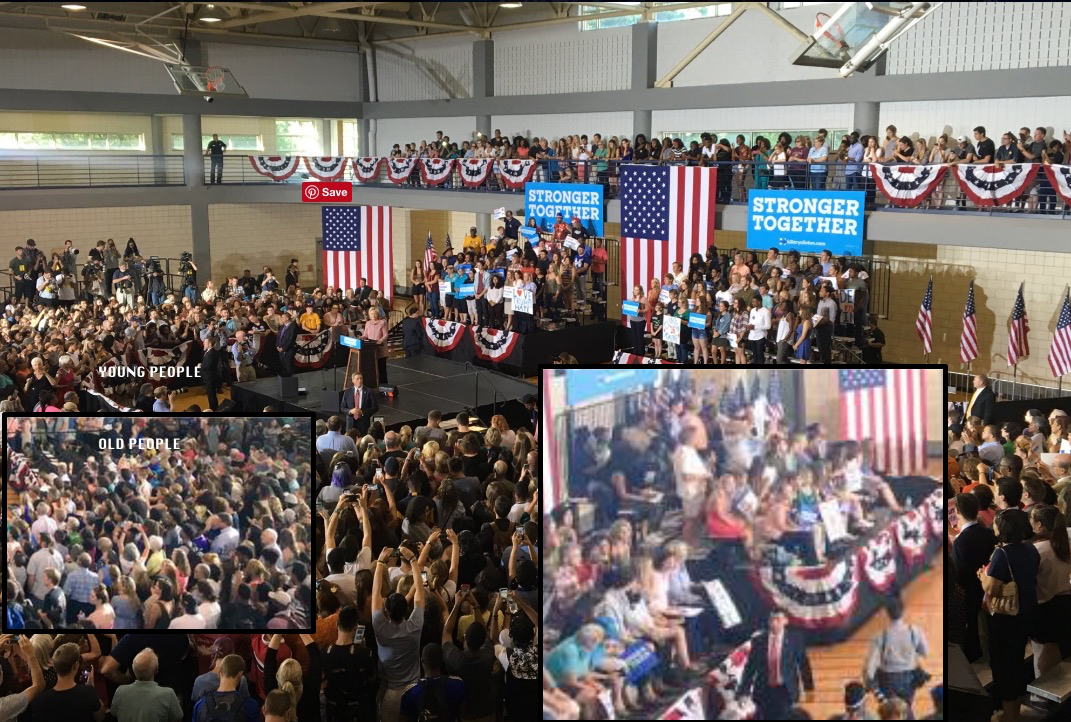 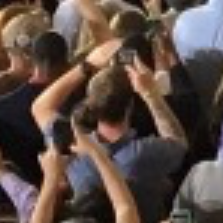 Will he spill the beans? 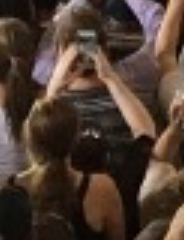 Can he tell us? 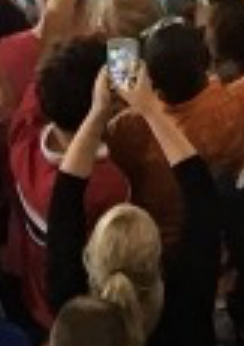 Can we ask who she was talking to?

MSM Covers up Phones with Campaign Graphic to hide Fakery


Two People "Kicked" out of Gym...where the rally was held (can hear in background) - Empty Gym.

Want to know the weirdest thing? I f you Google the location of where the rally is held, nothing comes up. WTF is that? If I host an event, the directions map is there, and its there months later.

The event was held at: The Old Student Recreation Center (not that it was listed in most articles or do announcements pop up), but it seems there are zero photos of this place normally. Anyone near NC Greensboro and can get a few shots of this place empty?

I really want to know how much is fake here...

By the way, if you haven't seen it:

Hololens augmented reality systems. 10-20 years out they could easily have something that allows...say, an entourage of politicos to go in an empty room and shoot a crowded rally. All camera equipment is simply hooked into their feed. So any "real pics" you see from the event was their crew running around snapping video/photos.

That was her entourage in Greensboro btw.
edit on 19-9-2016 by boncho because: (no reason given)

I said in another thread I would try to dig up some local sources or do whatever, but nothing came up. None of my friends talked about it. I mean Chelsea was supposseddly in my town before and I missed it? not a big town no one mentioned it and I know exactly where it was supposed to be, but ya know I can't see everything..

But you mofo if you didn't get me again... 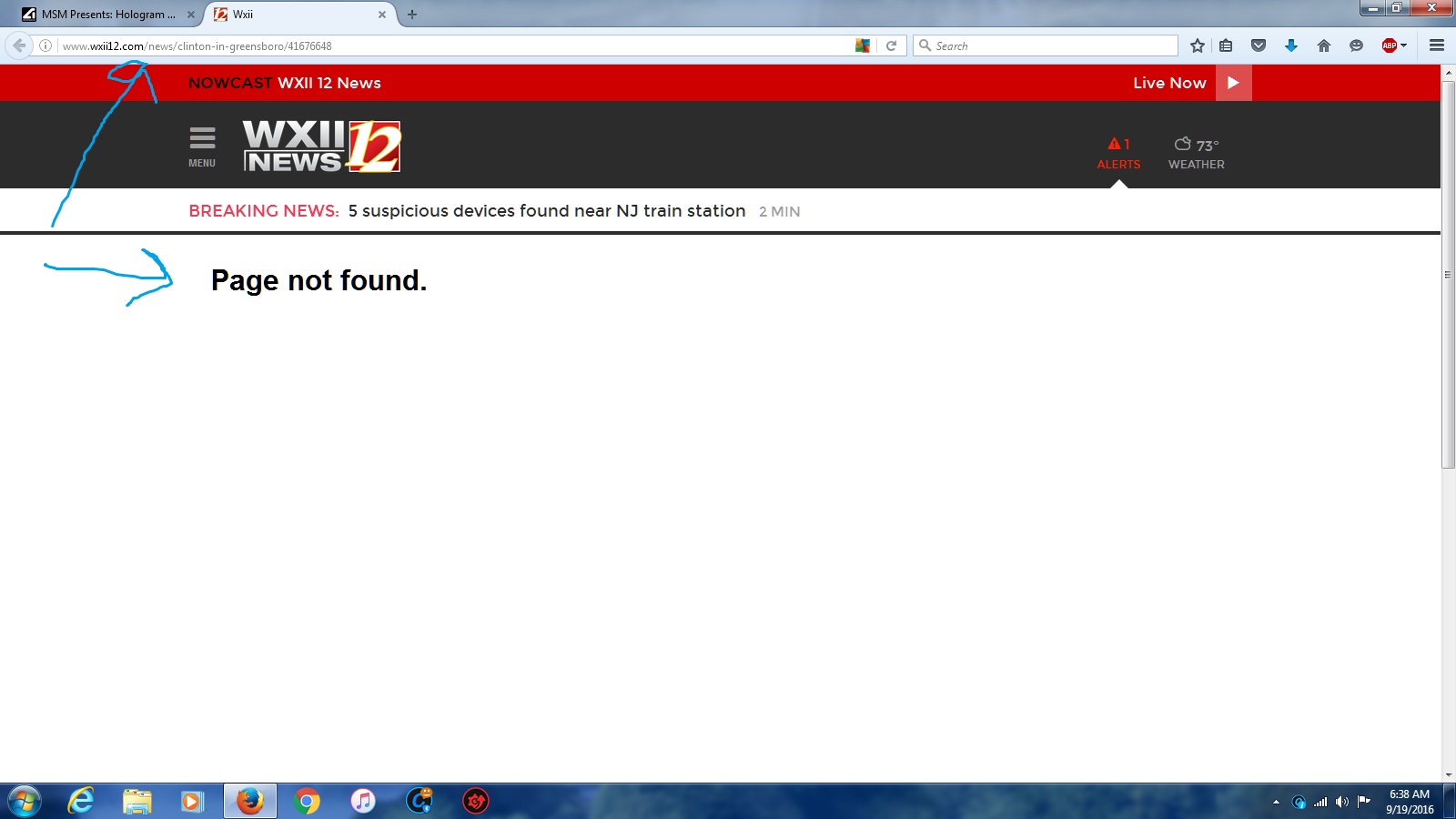 google cache for above:

VISIT. THIS WILL BE A BIG DEAL. SEE HOW SHE HANDLES HERSELF ON HER FIRST CAMPAIGN STOP AFTER . SHE WILL NOT BE ABLE TO GLOSS OVER IT. SHE WILL EXPLICITLY TALK ABOUT HER HEALTH. YESTERDAY, SHE PUBLICLY RELEASED MEDICAL RECORDS AND A LETTER PNEUMONIA DIAGNOSIS WAS MILD AND SERVE AS PRESIDENT. FOR AN AMERICA THAT A STRONGER TOGETHER. YOU CAN EXPECT HER TO TAKE SHOTS AT DONALD TRUMP WHO IS AGGRESSIVELY CAMPAIGNING AGAINST HER, SPENDING A LOT OF MONEY IN CAROLINA. WE TALKED TO A POLITICAL EXPERT WHO SAYS DONALD TRUMP IS HE WAS TALKING ABOUT YESTERDAY ON DR. OZ. >> SHE WILL NEED TO SHOW THAT SHE IS PHYSICALLY CAPABLE. THIS IS NORMALLY NOT SOMETHING ELECTION. THIS IS THE FIRST WOMAN PRESIDENT RUNNING BUT GIVEN THAT , SHE WILL HAVE TO SHOW VOTERS IN NORTH HANDLE THE RIGORS OF THE PRESIDENCY. BRIANA: SHE IS SPEAKING AT THE OLD REC CENTER HERE ON THE UNCG 1:45 P.M. THE EVENT BEGINS AT A 40 5 P.M. -- YOU CAN WEBSITE. THEY ARE ONLY WORKING WITH ABOUT

This article is also strange?


GREENSBORO — Hundreds of people lined up outside UNC-Greensboro’s old student recreation center Thursday for a chance to hear Hillary Clinton in her first campaign stop here.

More than 1,000 remained outside the UNCG venue, waiting to see the Democratic presidential nominee, when officials deemed the hall filled and closed the door.

If you read the rest of the article and read carefully...

read the rest no one actually interviewd went inside.


Is that the rec center?
edit on 19-9-2016 by IgnoranceIsntBlisss because: (no reason given)


Is that the rec center?


I've been there before but honestly I woudn't recall such a thing.

getting stranger by the minute..

Vaughan was one of several people to introduce Clinton (which she also did for Bill Clinton this spring, can you say swag), and both Foster and Trapp got to meet the former secretary of state before she took the stage to make her speech.

Allegedly, anyway. Because here's the only photo evidence I got of that: 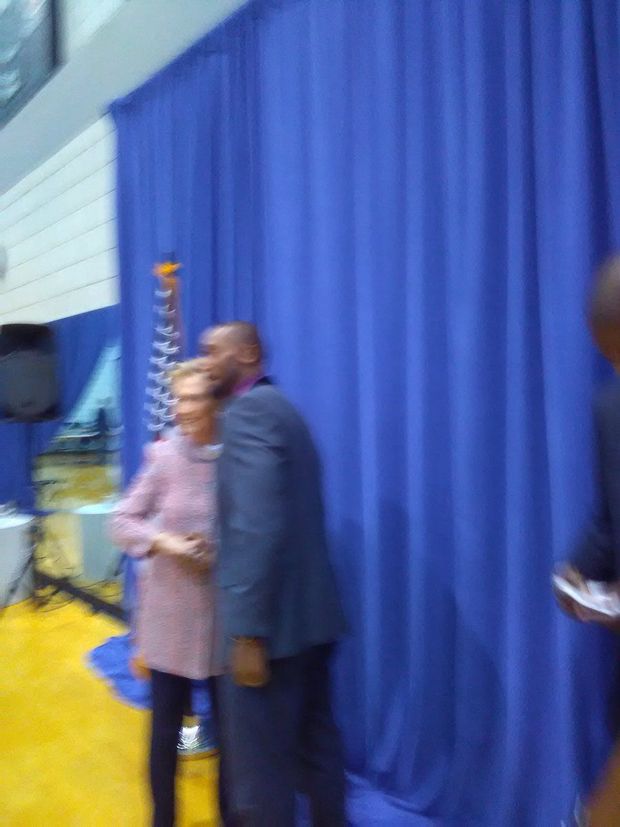 More pictures below and contact infor for the reporters.


There were varying estimates Thursday on just how many people came to hear Clinton, ranging from 500 to 1,500.

More than 1,000 people remained outside the UNCG venue, waiting to see her, when officials deemed the hall filled and closed the door.

estimates 500 or 1,500 showed up but 1,000 were turned away? That gives us the possibility of the right number all the way to negative 500 people. I'm baffled at those two points...

That's so far off I don't even know what to say.

I've been getting bombarded with people asking me to register to vote constantly everyday like 6 people on my 30 minute walk. They're obviously hillary supporters my town is super liberal, little do they know I wouldn't vote tht lunatic into mcdonalds drive through.

Just posting some oddness I found..

the deleted article that still had the page there with url still reading the story is odd. There is a delted video I'd like to find now google cache didn't get the video unless I'm seeing wrong.
edit on 19-9-2016 by Reverbs because: (no reason given)

Those last pictures are the Devin Hangar in GTA 5

Apparently the last thread the OP authored on the subject wasn't getting enough attention so we needed a wash, rinse, repeat thread. Oh but this one is "different" because it's about how everything was faked, instead of just Hillary. And the crowd. And the stage. And background. And people.

it takes a special kind of stupid to make a comment like that.
Currently Boncho is the only one who actually puts time in threads.

His work is well thought, filled with interesting links and well written.
You don't have to agree with thread, but at least give the man some credit.

Polishing a turd doesn't make it less of a turd, whether one fawns over the person doing the polishing or not.
edit on 19-9-2016 by Shamrock6 because: (no reason given)

SOmeone posted a twitter feed from people who went to the rally, they all said that it was "dead" and were asking whether they got the location or date wrong. Surely an ATSer would have gone>>>

IF the footage was faked there's two likely explanations:

1. Minimal crowds rocked up. Looks very bad for team Hillary so they splice together footage of crowds from her previous rallies.

2. Her health is still shaky and they couldn't risk another collapse or medical emergency so they faked they pre-recorded her speeches infront of a green screen and hired a few actors to interact with her. They then animated the crowds in.

originally posted by: MongolianPaellaFish
Just when I thought ATS had reached Peak Stupid, this thread comes along.

Yeah, right, so post a flyer announcing the event!

originally posted by: Shamrock6
a reply to: Belgianbeer

Polishing a turd doesn't make it less of a turd, whether one fawns over the person doing the polishing or not.


There is a new video on this thread. Given two of them together, there is obvious obvious proof of fakery. Undeniable. Feel free to explain this: 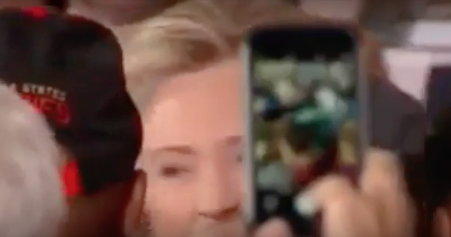 Feel free to explain why there are no directions to the location or advertising of the event being held!

PS I made a new thread not only for new evidence, but because I was hoping others might work on the task of proving this to close minded fools rather than sit around chucking stones. Keep derailing though...

I think this is a legit (legit) photo from the event: 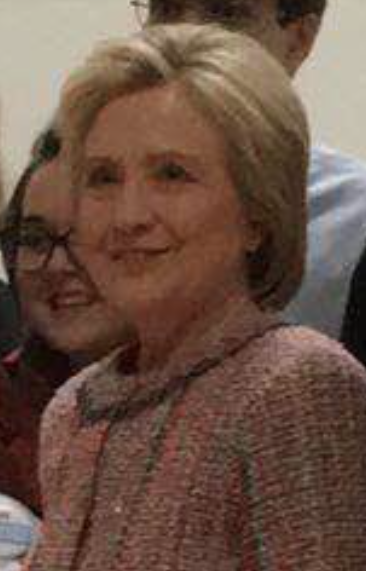 Because it doesn't look like her. Now look for another picture where Hillary smiles showing only a small part of her teeth, it doesn't happen. Why? She has a natural open-lip: 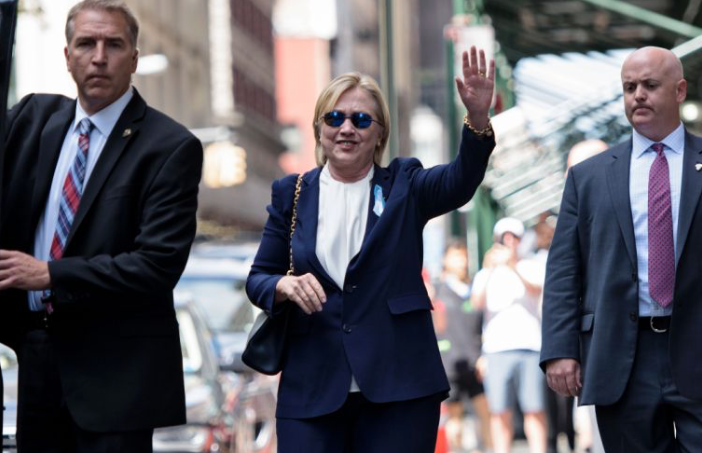 Hecate666
+3 more
posted on Sep, 19 2016 @ 08:22 AM
link
I really like this particular Conspiracy Theory, at last something outlandish and interesting. On one hand it's complete lunacy, on the other there are titbits [like the mobile screens that don't show the background] that make it strange enough to stay interested.
Do I believe Hillary is a hologram. Nope.
Do I believe that they sort of staged this on a smaller scale and embellished it to make it look massive? Could be, has been done before.
Maybe because of her health etc.

Either way, the OP is detailed and well written and even though some of this is FAR fetched, it is a Conspiracy Theory par excellence and it is posted on [the?] biggest CT website. What more do you want?
If we can't post THEORIES here, where on earth can you?
Plus it's in 'Skunk Works'.
It's perfect!

I think I have deduced the deception, thanks to this post by Reverbs. 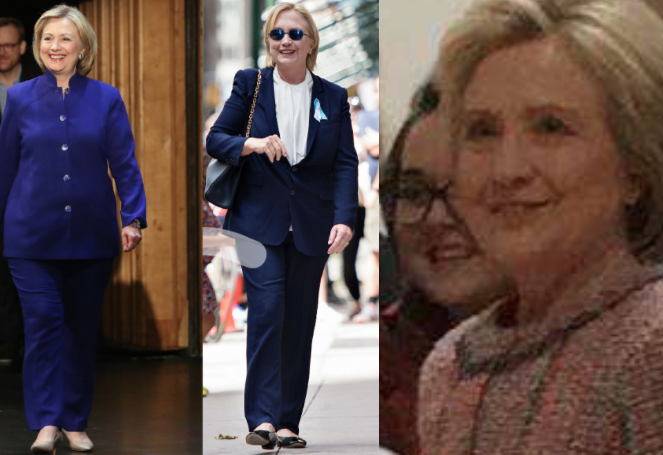 DEFCON I
they are faking a Presidential Candidate & I know the why & the how, & all of it now. Here are the facts:

I show all of this stuff to my wife before I post to make sure Im not being skewed by bias. I give her alternatives. She is dead on with each item. "That's not her." I question her on it, "Are you stupid, it's not her."


originally posted by: Shamrock6
a reply to: Belgianbeer

Polishing a turd doesn't make it less of a turd, whether one fawns over the person doing the polishing or not.

There is a new video on this thread. Given two of them together, there is obvious obvious proof of fakery. Undeniable. Feel free to explain this:

Feel free to explain why there are no directions to the location or advertising of the event being held!

PS I made a new thread not only for new evidence, but because I was hoping others might work on the task of proving this to close minded fools rather than sit around chucking stones. Keep derailing though...

Trump campaign made a fake iphone screen to fool us? - joking of course

I don't know, I wonder what really happened to her on the 11th?

It's not her. Your wife is right on. I was looking at still images last night of the woman who was supposedly in Greensboro. I had no idea you were making another thread! It's not Hillary. The woman in the glitchy video has eyes which are further apart than Hillary's and she has a wider jaw than Hillary. That was not Hillary.

They have been faking a Presidential candidate.