originally posted by: loam
So the claim he's a registered republican checks out.

originally posted by: thesaneone
So........because he registered in March he's a dedicated republican??????? Yea right I almost buy this lie.

Why not? It worked for Trump didn't it?


Jake Anantha graduated from Charlotte-Mecklenburg’s Ardrey Kell High this year and enrolled at Central Piedmont Community College. His parents are conservative Republicans, but his dad says the teen’s ardor for Trump sometimes made even them say “Whoa!”

I suppose the DNC must have created an entire fake family and forged the voter registration rolls to pull this off..

You guys are nuts in the way you invent BS to attack people.

Always some goddamn plant conspiracy claim or another from the right, no possible thing as authentic people anywhere, outside of other Rights. Except if a Rightwinger goes against cultish expectations a hair, then they're plants, too.

originally posted by: matafuchs
Did the SS say it was because he was brown? Nope.

This is the issue I have here. Trump threw out no one. The US Secret Service did. Now, no one was profiled and I will tell you why.

originally posted by: amicktd
Unreliable source because CNN has already directly worked to assist Hillary's campaign. That's like sourcing my own Facebook page with a youtube video I made to prove a point.

Where did CNN directly work to assist Hillary's campaign. Put up or shut up.

Last I heard, they had Corey Lewandowski and Kaleigh McEnany (and maybe Jeffrey Lord?) on their payroll.

I guess that means we can should immediately diregard every pro-Trump/anti-Hillary anything that has been put out by Fox on its numerous platforms as well as all that pro-Trump propaganda from Breitbart (well we should disregard everything from them anyway).


originally posted by: loam
So the claim he's a registered republican checks out.

Well he was all in for Trump before...now however..

Trump-Loving Indian Teenager Kicked Out of Rally, Now Voting for Gary Johnson
'Why are all these white people allowed to attend and I’m not?'
reason.com...

Specifically it was this guy...At the 52 second mark...and no, it is not SS who is tasked with tossing brown people from Trump rallies.

See the man at 52 second mark here in the vid at this link?
www.newsobserver.com...

I image searched and found this on him from last year..
Donald Trump’s Security Hits Mexican Immigrant In The Face
www.thewrap.com...

posted on Aug, 19 2016 @ 03:45 PM
link
Lets not talk about his speeches...or visiting Baton Rouge...lets listen to an 18 year old kid who now has his 3 minutes of fame. You all as well as the MSM are pathetic in your attempts to show he is 'racist'. There were plenty of minorities at the rally I was at and no one said anything.

They are not 'event' security but they are there. I saw them. LIke I said, I was not approached by a Trump detail but USSS and the sheriff's department.

Sorry, this is a non-story.

Ok, so it was his security team. You got me...so what?

FYI - This is a pick of the Trump Security guard kicking out the brown Trump Supporter .... 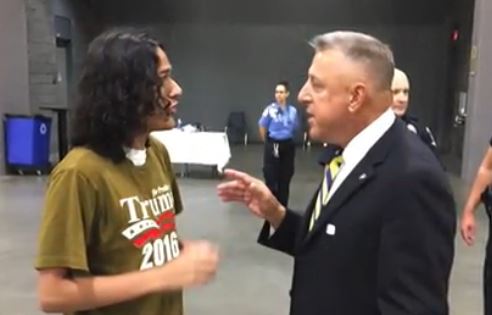 And I found this from last year.
Donald Trump’s Security Hits Mexican Immigrant In The Face
www.thewrap.com... 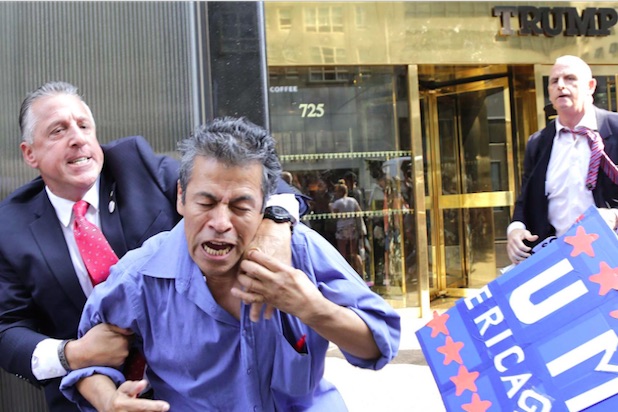 Leave it to racist regressives and their identity politics to come up with new racist labels whenever it suits their agenda like labeling Trayvon Martin's assault victim George Zimmerman "white hispanic".

Don't know, but obviously brown enough to qualify for booting from a Trump rally.

Yeah, Maria Cardona is a DNC strategist and a partner of a PR firm (that's the address you see). Are you really paying this little attention?

Have you not noticed that all of the cable "news" stations employ tons of party members/officers/ex-politicians/etc? Do you think this is some particular blackmark against CNN that doesn't apply to the rest because you saw it on WikiLeaks?

Did you miss the part where I said CNN has the following on it's payroll (verified):

Are you shocked and dismayed to find out that CNN employs Trump operatives? Don't even get me started on the Fox News line-up and again, did you miss the whole Roger Ailes thing?

Roger Ailes, who essentially made the Fox News empire (and is being accused of all kinds of sleazy sexual harassment and misconduct by 20+ women including current Fox hosts), is now working for the Trump campaign. He was a media consultant for Nixon, Reagan and Bush 41 among others. I mean seriously, look up the personalities/hosts/pundits/etc at Fox, CNN, MSNBC, etc and then tell me why you've come to this ridiculous conclusion that what you're talking about is "irregular" when it's in fact, completely commonplace and only becomes unacceptable when it comes to somebody crying that CNN is anti-Trump.

How tiny are that guys hands? Is he related to Trump?

This is the rally I was at...the pictures they are showing of the crowd are over an hour before Trump was on...Including the Rebel flag that was removed by Trumps Security before it started but watching this video you would not know it.

Aside from seeing that this family has some relative means, I haven't dug further.


a reply to: Deny Arrogance

Apparently white with no party affiliation.