Now they claim "Human error" for the classified markings on Hillary Clinton's emails.

The SD spokesperson actually said the markings should have been removed !!!!

That alone proves many of Hillary's "unmarked at the time" emails could have been altered !!

No wonder so many were marked classified in reality.

Another campaign trick I suspect.

The comedy of errors is just getting started.

Kirby was addressing questions about FBI director James Comey’s announcement on Wednesday that investigators recovered emails that had classified markings on them when they were sent to Clinton.

The statement undermined Clinton’s claim that she did not send or receive information that was marked classified.


But even if information is not marked “classified” in an e-mail, participants who know or should know that the subject matter is classified are still obligated to protect it.

The markings are not the important thing. The content is what makes them classified. So what Kirby said was a totally stupid attempt to divert from the issue. 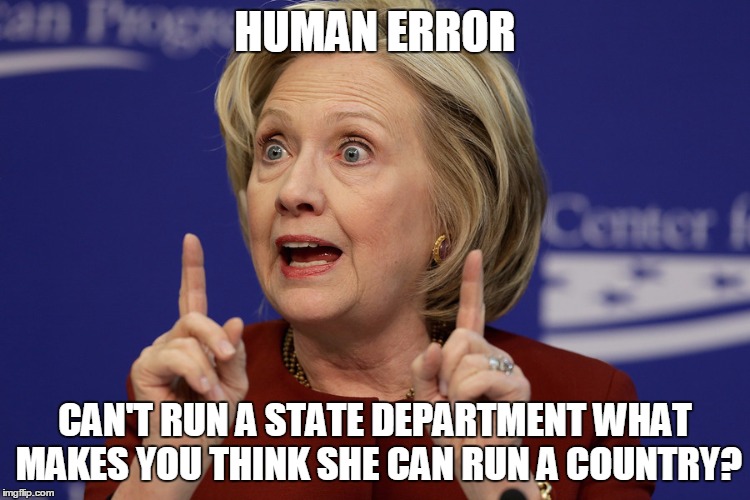 Also, this just goes to show that humans are masters of rationalization. These bunch of a##holes are not brave enough to openly say we f##ed up, and you expect them to lead your country with clear conscious?

All of this is happening, because people are not interested in politics, and only the most retarded and corrupted people are ruling over us instead.
edit on 315k2016Wednesdaypm014 by Nikola014 because: (no reason given)

You know, people should start listening to you more. You pretty much nail it.


Huh...Isn't she the person Obama claims is the MOST QUALIFIED EVER candidate for President?


Huh...Isn't she the person Obama claims is the MOST QUALIFIED EVER candidate for President?

Human error is in the eye of the beholder. For example...........Since the US government these days is all about opinions being projected as facts as they interpret them, the same could be said about the fateful night for humanity that Hillary was conceived - clear case of human error on her silly parents behalf for not practicing safe sex.