posted on Jun, 4 2016 @ 09:13 PM
link
This is my first new post to this site. Linked below are the first 8 parts of a huge series of reports on NORADs relationship with the UFO matter. I have aimed to display and study never-before-seen documents that show that NORADs statements on the UFO matter have been untruthful and misleading. I have also discussed, at great length, various small directorates and cells within NORAD that are responsible for unidentified aircraft, unknown tracks, and oddities that have appeared on dedicated NORAD systems. I too have laid out the history of NORADs response to the UFO issue from the 1950s onwards.

ufos-documenting-the-evidence.blogspot.com.au...
edit on 6.5.2016 by Kandinsky because: Turned the volume down in the title (No caps-lock)


Figured I would help out welcome to ATS


The documents clearly state unidentified helicopter intrusion and also low flying aircraft/ helicopter sightings on the letter head of a few of these documents. I am not sure what this is really trying to say here as I have not read it all yet much less took the time to really think on this farther then the witness claims of hovering where later changed to not hover and also things like the inclusion of the aircraft paint and body style are also mentioned.

The most unusual thing stated is that the two aircraft joined and then shut their lights off at the same time is something I do not fully understand
edit on 4-6-2016 by Brotherman because: (no reason given)


As a little incentive to believing that we are told lie after lie over the years about what NORAD sees, I'll sweeten the pot a bit for this thread by reminding ATSers that Ben R. Rich the former head of Lockheed's famed Skunk Works, in his book by that name mentions twice that as they were testing the SR-71 prototypes that they would call NORAD in advance to let them know that their "fast mover" was one of ours and should not be mistaken for a UFO.

posted on Jun, 4 2016 @ 10:43 PM
link
Your obviously reading the NORAD Command or Senior Directors Logs that were entered into the J3 Daily Message Updates for vital activity in CONUS. These were released to Todd Zechel first, then Barry Greenwood, then to others. These Logs formed part of the collection of 1975 ''Over Flight'' records released by the NMCC, NCOC, DIA Ops, AFINZA, AFINS, AFOSI Nth, AFOSI HQ, and the Command Posts of the bases involved in the week long intrusion of their restricted airspace.

The FBI and AFOSI were not able to ever identify any helicopters (law enforcement helicopters, transports, etc) involved (if they were helicopters) nor prosecute offenders. This was restricted airspace at each base. Also, no flight plan was established. That alone equates to two serious breaches of aviation law. And this went on at 5 bases, all with nuclear weapons. The ''helicopters'' also transversed distances so quickly (in two cases) that even the Apache helicopter would look tame. And the Apache wasnt even invented then...

General Stratton asked SAC to inform him of the whole sitiation a month later. We know from released records that he was given two different summaries of what went on, and both were untruthful.

NORAD had, comparatively, less involvement than the other relevent commands and components. But they did scramble combat jets on one occassion. They also asked (through the new AUTODIN FolUp channel) for updates regularly.

This cat and mouse game with unidentifieds and unknowns and mystery choppers has never been solved. Officers who were at those five bases at the time have come to UFO researchers and quietly discussed how serious these events actually were. These events broke records at Loring AFB. Never had there been so much Priority and Immediate message traffic in a four day period to/from the base. At Wurtsmith AFB they issued their first OPREP-3 SERIOUS INCIDENT/EVENT reports in years. At Malmstrom they begged SAC to issue a Stage III Alert for the whole Northern Tier / Canadian boarder. And so on.

The only thing I have deduced thus far is the point of the blog is to establish that there is a formal, secret, means in which military and government agencies communicate information regarding to security breach's.

This is a long document with lots of material to cover, it may be awhile till I finish reading it.

Now this is a great post, thanks! I look forward to reading all of it.

posted on Jun, 5 2016 @ 06:04 AM
link
A UFO can be anything... so a lot of dry documents that say a lot but really nothing at all.
was hoping there where some juicy info like hints of time travel, alien contact and secret space programs..
Or perhaps I am just getting desperate to learn the truth of it all


Wrong there is only one truth.. not the one you make but the universal one
Please enlighten me if I missed anything in the articles presented, what truths do you see ?
There is only speculation and far reached conclusions, and I predict yours is no different, yes ?

originally posted by: PaulJamesDean
This is my first new post to this site.

Welcome to ATS, Paul, it's good to see you here.

For those not familiar with Paul, he is an Australian researcher that has worked - largely behind the scenes - during the last couple of years or so on getting hold of declassified UFO documents. Paul has gone considerably beyond simply requesting all the UFO documents held by various agencies - he has made lots of more specific requests for documents.

Probably more importantly in my personal view, Paul has also been working to get some material released from the archives of some UFO researchers that have amassed considerable collections of Freedom Of Information Act material obtained over the last few decades (particularly Barry Greenwood, co-author of the 1984 book "Clear Intent : The Government Coverup of the UFO Experience).

Paul has spent a lot of time and effort on these topics - probably more time, at the expense of getting enough sleep, than is good for his own health! I'm concerned that he may burn out.

I hope Paul sticks around on ATS.

Linked below are the first 8 parts of a huge series of reports on NORADs relationship with the UFO matter.
...
ufos-documenting-the-evidence.blogspot.com.au...

I know that Paul has even less patience for techie stuff than me, so here are working links to each of the 8 parts he mentioned:

NORAD And The UFO Smokescreen : Part 1

NORAD And The UFO Smokescreen : Part 2

NORAD And The UFO Smokescreen : Part 3

NORAD And The UFO Smokescreen : Part 4

NORAD And The UFO Smokescreen : Part 5

NORAD And The UFO Smokescreen : Part 6

NORAD And The UFO Smokescreen : Part 7

NORAD And The UFO Smokescreen : Part 8


By the way Paul, I learnt a few years ago that including some images and videos in your post on ATS makes it more likely for your work to get noticed and discussed. I know you may not want to learn how to post images, but once you learn it is quite quick and easy. One trick I found very useful when learning how to do things here was to click on the "Reply" button on someone else's post and look at how they included an image or video. I'd be happy to help you with relevant formatting for ATS. (We can chat about that here or via email/Facebook).

Here's a sample image from your blog: 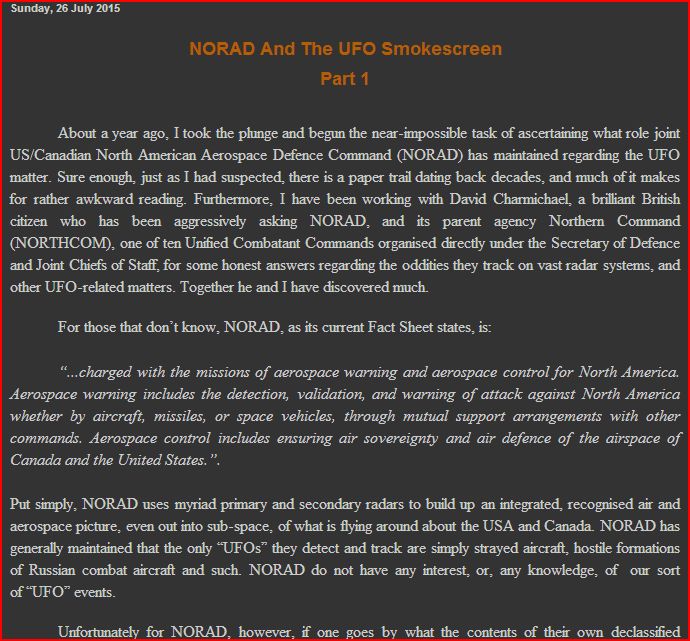