Swarms of Octopus Are Taking Over the Oceans

According to this recent Gizmodo article , scientists & marine biologists have noticed that cephelopods such as squids, octopuses, and cuttlefish, are reproducing like rabbits. The article suggests that this may have something to do with the decline of coral reefs...

Something strange is happening to the oceans. As coral reefs wither and fisheries collapse, octopuses are multiplying like mad. As soon as they perceive weakness, they will amass an army and invade the land, too. Okay, that last statement is probably pure paranoia. But it is a bit unsettling that cephalopods—squids, octopuses, cuttlefish—are booming, and scientists don’t know why. An analysis published today in Current Biology indicates that numerous species across the world’s oceans have increased in numbers since the 1950s.

One snippet I found interesting:

So, why are cephalopods kicking butt when pretty much everything else in the oceans is dying? Doubleday and her co-authors are still investigating, but they suspect it has to do with rapid population turnover rates. “Cephalopods tend to boom and bust—they’re called the weeds of the sea,” Doubleday said. “If environmental conditions are good, they can rapidly exploit those conditions because they grow so fast.”

There are several recent threads regarding octopuses here on ATS such as:
Octopus lodged in boy's throat
Ghost Octopus
New Octopus Species Discovered
and my favorite:
Scientists Declare Octopuses are Basically Aliens

What do you all think? Will they decide it is too crowded in the oceans and begin to take over our cities? These are amazing creatures and I find them fascinating! It is, however, disturbing what has been happening to this planet's oceans, and it is an absolute tragedy that Fukushima continues to spew radiation into the environment. Who knows, perhaps the radiation will cause the cephalopods to mutate into Godzilla-like monsters resembling the Kraken?

It should be a boon to the fishing industry.

I hope they start popping up in my local grocery store at reduce prices from the norm! Oh how I love me some octopus! Then again, I might start glowing green at night or grow a few extra appendages, but meh, I am at the end of my life cycle anyways, so might as well enjoy some good food!

interesting news - thanks for sharing this. We are in fact being invaded from creatures that resemble something from another planet www.geek.com...

OK, aside from good eats, this actually demonstrates how out of whack the balance of life in the oceans has become.

There was an amazing film made in 1982, called Koyaanisqatsi, " ko.yaa.nis.katsi (from the Hopi language), n. 1. crazy life. 2. life in turmoil. 3. life disintegrating. 4. life out of balance. 5. a state of life that calls for another way of living."

Amazing cinematography set to a musical score by Philip Glass. A devastating look at what we humans were doing to the planet ---30 years ago ...and look at the consequences now. Go view it and weep.

As soon as they perceive weakness, they will amass an army and invade the land, too.

Are octopuses smart?
Yes, but of course one has to ask what that means. I would say intelligence means learning information and using the information that you've learned.

So, how do you know they are smart?
We observed how octopuses figure out how to open clams and what sort of flexibility and variety they have. We give them clams and mussels in order to figure out which they like best. They are very strong, but we found they prefer mussels because mussels are easier to open. They switched to clams when we put the clams on a half shell. They clearly made a decision to go with what was easiest. We noticed along the way that yanking them open wasn't the only thing the octopuses could do to open them. They have a cartilaginous beak, which looks a lot like a parrot's beak, and they could chip at the edge of the clamshell and then they could inject poison and weaken the clam. Or they actually have a salivary papilla, and they can drill a hole to inject the toxin that way in the stronger clams. They were selective about what technique they would use with what species. We decided we would cheat on them: We took one of the easier ones and wired them shut. They switched techniques according to what would work best. Of course, this doesn't sound hard to you because you're a human, but most simple animals keep trying the same technique.

I think you need to add the '.php'

here is the link to the movie SeaYote described: Koyaanisqatsi

Sh*t, we finally done pissed them off....

Reminds me a little a about laying on the beach, everything is fine, sun is shinning wind is non existing.

Then suddenly out of nowhere, a swarm of lady birds starts coming, not one, not two, but tens of thousands, very aggressive, biting everything with a pulse.

Nature is annoying some times but at the same time beautiful.

This has probably already been posted elsewhere, but since we are talking about how smart they are I think it is worthwhile mentioning the recent escape of Inky the Octopus from the penitentiary (aquarium) back to his safe house (ocean).

I suspect that Inky was in fact a spy and was gathering intel on our above sea-level defense systems. He will now spill the beans to his co-conspirators and exploit our weakness' to take over the planet. I suspect the cephelopods will then create an elaborate and expensive fake mission to the moon. 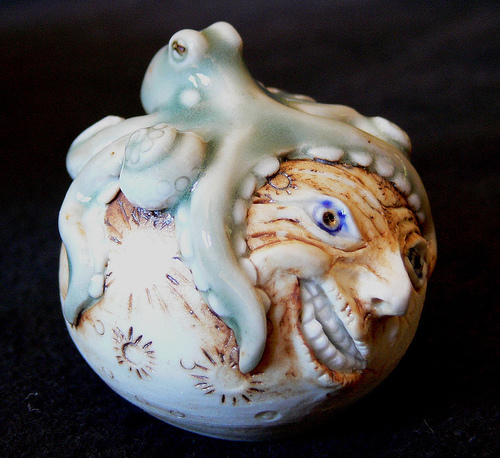 Thanks for fixing that, I'm still a newb to ATS ---been a shy lurker for years, finally jumping into the fray.

Thanks for fixing that, I'm still a newb to ATS ---been a shy lurker for years, finally jumping into the fray.

originally posted by: theMediator
"Don't look a gift horse in the mouth"


Close.
The Hawaiian word for octopus is he'e.

posted on May, 24 2016 @ 11:26 AM
link
This is just the beginning, soon they will colonize the land and start war with the humans.
They want payback for what happened to Paul the Octopus and make "calamans" from our hands and legs.

originally posted by: dashen
I for one welcome our new mollusk overlords

Mollusks cover a wider range of creatures than just cephalopods.

Either way I always liked their taste when prepared right.