posted on May, 17 2016 @ 07:07 AM
link
Given the nearly limitless depth of knowledge here on ATS, I'm wondering if we have any toy collectors or people knowledgeable about vintage toys. Hopefully, this might turn out to be a fun thread.

I used to dabble a little in collectable toys so I've got bit of historical knowledge (which I will get into a bit later), but first I am trying to find out some information on a specific toy. This one stumps me...and I even had one once (for a while...which is another story). I'm hoping someone here on ATS may be able to shed some light on a mystery which has eluded me for nearly 50 years. I know almost everything about where it was purchased, the year, what it looked like and everything else BUT what it was, and who made it.

As a kid back in the 1970's there were lots of cool toys for kids. Seems like there were a lot more than there are today. By "cool" I mean toys which were realistic in form and scale. Many of the toys I see now days are nearly totally devoid of both scale and realism. It seems like many of the toys today are more fantasy type things and exaggerated in one respect or another (which seems like kind of a bummer to me...if I were a kid still).

The toy I am searching for is a scuba diver / frogman action figure. It was a highly realistic action figure like toy which was about 1/2 the size (perhaps a bit smaller) than the GI Joe action figure of that era. GI Joe was one of the toys I collected as a kid so I'm fairly knowledgeable about those, and this toy was not a GI Joe.

I know it was purchased at the US store known as Toys R Us in late 1973 - early 1974. It seems like they might have come in a set with more than one figure. Again, the figures were highly realistic, they had removable diving equipment and they were moveable / pose-able. They were made from some kind of plastic, almost a rubberized plastic with a rigid internal 'skeleton' (maybe wire). They were not hollow, but rather solid and kind of heavy. They were waterproof, so you could play with them in the water (tub / pool, whatever). They didn't float, but they didn't sink like a stone either. They weren't motorized in any way (battery/wind up, etc.). Above all, they were realistic; they looked like almost an exact scale model of a real human SCUBA diver. They weren't military (i.e. no guns, etc.), it seemed like they were more akin to undersea exploration (think...Jacques Cousteau-ish).

When I was about 9-10 my friend got some of these and he brought one to play in the pool with. He had more than one, and they were so cool I eventually convinced him to trade me one for something else I had. I was completely STOKED because this was the coolest toy I'd ever seen! However, in a bizarre twist of fate the toy was soon lost to a nearby roof (picture two boys wrestling and playing keep-away). Next thing I knew Mr. Cool Frogman was airborne...and vanished. We looked, and looked, and searched every square inch for about a mile (including the roof), but it was gone. Gone forever.

The very next day I had my Mom take me to Toys R Us to search for this toy (I was going to buy another one with my lawn cutting money). I raced to the spot where I'd seen them in the store, but they were out of stock. I must have checked back at that store 100 times if I did once. No luck. As an adult I've even been known to go looking in Toys R Us just to see if I could find something similar. Again, no luck.

For most of my adult life the scuba diver / frogman toy has been an enigma for me. I don't know why really, I guess it had to do with how over-the-top happy I was to get one...only to lose it forever seemingly moments later.

ATS is a place of research, and I'm wondering if some of the bright minds here might be able to shed some light on what this toy might have been.

Vintage Frogmen? Voyage to the bottom of the sea comes to mind. So does The Creature from the Black Lagoon.

Back when the Ocean was still mysterious and toys were made to last.

posted on May, 17 2016 @ 07:13 AM
link
As kind of a footnote, over the years I've found a couple of vintage toys which come close. One of them was a toy known as Sea Devils and the other was a toy known as Frogman. I'm pretty sure Sea Devil's is not the toy and I've never been able to examine the Frogman toy up close to evaluate it.

Voyage to the Bottom of the Sea was one of my favorite programs as a kid too! The only character who did any real diving on the program was Kowalski (and maybe commander Crane or Sharkey), and I would have known if it was him (he was kind of a icon to me). So I'm pretty sure it wasn't from the show because I would remember it that way.

Only toy similar in description that I can remember from that period is the Major Matt Mason astronaut action figure.

Don't remember a Frogman/SCUBA diver figure like you describe.

Anything like these? Do you remember what color it was? That may help narrow the search.

Back then it was everything ocean, like Sea Hunt and Flipper.

I remember a frogman toy that used some kind of powder to dive and blow bubbles.

This is the only one i can think of. 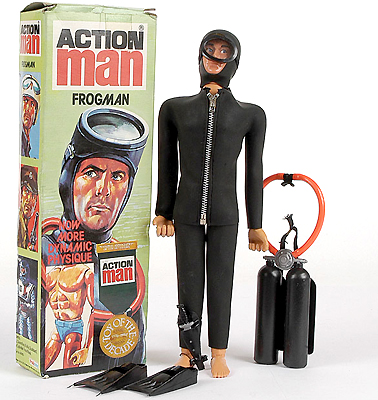 Maybe a little bit like the top one. I don't remember any holes in it though, and it seems like the fins slipped on and off the foot.

As I recall the color was blue, with a flesh colored face. The fins were yellow rubber/soft plastic...and I almost want to say the dive tank was more like a hard shell pack (not 100% on that element) and I don't recall the color of it.

The wetsuit was not a separate piece in the toy I'm thinking of. It was molded as part of the figure. The only removable items were the tank, and fins, not sure about the mask.

Yep, the ocean was this vast unexplored world where mysteries abounded. I think it was the mystery of wondering what all was down there which spawned people's imagination (mine certainly). I also think Jacques Cousteau opened a lot of people's eyes. I know I was riveted to every one of his shows when they would come on.

posted on May, 17 2016 @ 08:13 AM
link
In terms of the realism of the figure, this one is on par with what I'm talking about. However, this figure is from the early '90's. Plus, this is a later GI Joe evolution from back when they began to downsize GI Joe.

This is another example of the realism of the figure itself which I spoke of. Also, this figure has the same body composition as I recall. Notice the suit is molded as part of the figure and it's rubberized with a wire frame. I'd like to find out more about this Mattel toy, it's pretty darn close...

If you could marry these two toys together into one we'd almost be there.

I never had a Spirograph, LightBrite or Etch-a-Sketch either. But I did have a hand me down Mr Potatohead and a hand me down chemistry set from an older cousin.

The Sea Devil line appears to have been an extension of the Major Matt Mason line of toys. I was a HUGE fan of Major Matt Mason as a kid, and had nearly every one of those (boy, I sure wish I'd have held on to them...$$$$$ now!).

Anyway, one of the reasons I liked MMM was because of how realistic the figures were with their (what I now know to be) "Plastizol" rubberized bodies around a wire frame. The MMM figures were about the same size as the diver I described. And stumbling into the MMM genre makes me wonder if this might not have been it. As a kid I would have automatically liked anything which was MMM-like, and it appears the Sea Devils line was indeed very similar.

Yep, the ocean was this vast unexplored world where mysteries abounded. I think it was the mystery of wondering what all was down there which spawned people's imagination (mine certainly). I also think Jacques Cousteau opened a lot of people's eyes. I know I was riveted to every one of his shows when they would come on.


Me too. I am still fascinated by nature shows that show us life beneath the sea.