I am amazed at people's reactions to this. With the money the Saudi's have does anyone in their right mind think that Pakistan - which loves foreign money because it can't make enough of its own, would not sell nuclear weapons to anyone who can pay and the Sauds certainly can?

Anyone not familiar with what is happening in Pakistan should read this because the taliban, similar philosophy to wahabism, or at least as extreme are taking over Pakistan, so they are probably best mates.

I see this as a nightmare unless Russia helps keep the balance here and despite being bessimates with Israel, I would be surprised whether Israel will be too happy with this little it bit of news. But it does explain how bold Saudi is getting with its war mongering.

The BBC covered this story some time ago about what is happening in Pakistan although they only touched on how Karachi is virtually under Taliban control, the idea also that the taliban can access nuclear weapons should be making the headlines - but its not probably because of the panic it would cause to the financial markets etc.
edit on 21-2-2016 by Shiloh7 because: (no reason given)

This interview originated on RT's Arabic language channel. It has been kept off their English language channel to prevent it being debunked. I have seen no evidence that Dahham Al-'Anzi is a real person, never mind a Saudi analyst. The rhetoric he uses sounds as though it were written by the Kremlin, not a Muslim. Saudi Arabia, like Turkey and Japan, has nuclear arms, but this actor is no-one who is privy to that information. [HOAX!]
edit on 21-2-2016 by DJW001 because: (no reason given)

Even if this is not true, and personally I don't think it is, I have a question:

Does anybody here really believe that we are going to get through the rest of our history, even the next 20 years, without some frigging lunatic, either terrorist or state, using nuclear weapons?

It was an inevitable outcome the creators of the first atomic bomb clearly forseen.

Terrorists?.... Two of these bombs caused enough terror to end a war.

Seriously, it is simply a question of when, not if.

20 years?... I would say less than 5 at the most, and there are other weapons of mass destruction to consider as well, along with furthering radicalization of groups hellbent on either end times prophecies, or the annihilation of some other groups.

He is mentioned in the SA newspapaer Al-riyadh as a political analyst.

Edit: the photo of Dahham Al-'Anzi is a different guy from the one in the video (not sure if this is a common name).

Stop it, you're giving me a DOOM boner! I personally don't think humanity will survive at all another 50 years unless technology advances at a rate that we become a global egalitarian society & soon. Even then it might be too late. Long live the machines I guess.

I am amazed at people's reactions to this. With the money the Saudi's have does anyone in their right mind think that Pakistan - which loves foreign money because it can't make enough of its own, would not sell nuclear weapons to anyone who can pay and the Sauds certainly can?

You make a good point. The link you gave is interesting.


originally posted by: Zaphod58
Superstation95 mixes real and fake news. Some stories are real, but others are outrageous BS.

We would greatly appreciate you identifying for us, which stories we run that you feel are "fake" or "outrageous BS."

Wow, you registered an account here just to comb threads and defend your site if it was ever mentioned in a thread as bogus?

You must spend a lot of time going through threads.

How is this a surprise to anyone?

We've been letting the Saudis get away with murder since Day 1...

In my opinion there are too many inherent wrongs within every human being that, perhaps by design, bring with our advancement our own demise. We are almost there now, unless you are very old, or die suddenly soon you will most likely get to experience it.

I can't imagine why anyone would be excited by that. But whatever works for you.

In my opinion there are too many inherent wrongs within every human being that, perhaps by design, bring with our advancement our own demise. We are almost there now, unless you are very old, or die suddenly soon you will most likely get to experience it.

I can't imagine why anyone would be excited by that. But whatever works for you.


The common citicen have given up or is to far lost to see the issues taking Place. We drift the system we hate, and we think we have no other choice but to vote for the one who is least evil. We hate and blame the government for everything we do for it.

The government have already done studies on this through Norman Dodd. Even the study showed that the only way to change a society is by war.

But the sad part is that we are not groomed to come up With a alternavie to the crap we have. We dont know how to live without being controlled.

Holograms? How primitive. We have these things now called "actors." They are actual human beings who impersonate non-existent people. Do a search on this guy and see if you can find anything to substantiate his existence outside of television propaganda broadcasts. Good luck.

originally posted by: Esoterotica
This is good news! We've been lacking any real DOOM lately.

Coming from a man with a freakin mushroom cloud for a Head... I'm thinking maybe your idea of "good news" fits on a whole other scale than the average, non-deathwish-having person out there walking around smelling flowers and enjoying sunsets and long walks on the beach lol

I do have to admit though, it does kinda make me feel all warm and tingly on the inside! Heehee... Like being 8 years old and waking up on Christmas morning. Eeeeeeeeeee!!!!!!!!!!

No but seriously, someone needs to put a stop to this madness. Its all fun and games until someone pokes their eye out!

Is this really news it was known for years that Saudis invested heavily in Pakistan's nuclear program. It was a well known secret as they say that they acquired nukes. As far as testing that's been done already so unlikely this threat is aimed at one country Russia. Saudis are afraid that Russia could use battlefield nukes if they became overun in Syria. By the way in the article posted 2 yrs ago they discuss their ballistic missile site they built outside Riyadh

originally posted by: Morrad
I was just reading a BBC new article from November 2013 which says they were on order from Pakistan.

It came with fries and soda??

Is there a drive - thru order your nukes in 5 minutes??

It should be noted that the poster who took issue with us, has not cited a single example to back up the accusation he made.

I assume this is directed at me. I challenged you to provide the bona fides of one of your sources. Rather than do your due diligence and provide his CV, you resorted to childish sarcasm. This was hardly professional. Had you done a search on Dahham al-Anzi, as I had, you would have discovered that he has virtually no presence on the internet outside of blogs reposting the RT feature you used as a source: 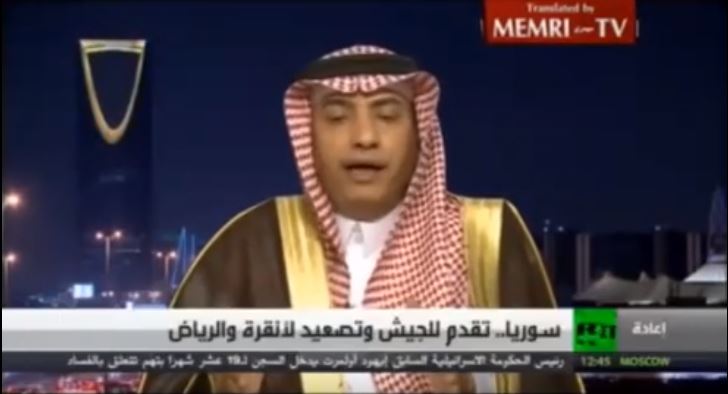 Note the logo in the lower right. This broadcast was originally Russian propaganda intended for Arabic speakers. Since RT has been known to hire actors when it cannot find real people to express the opinions it needs, I was naturally suspicious, as you should have been. When running a story, always trace it to its original source.

Subsequently, Morrad searched for al-Anzi in Arabic (Arabic is not one of my languages) and was able to confirm that there was a Saudi analyst by that name. He was uncertain if the man in the video was the same man cited in the Arabic press, however: 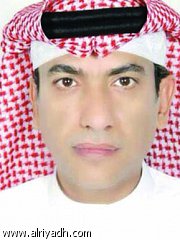 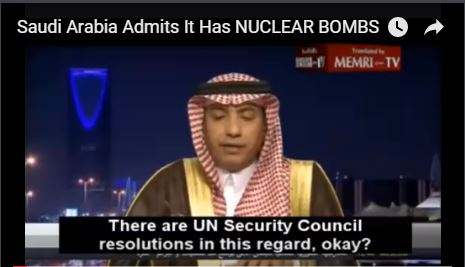 In this instance, I am willing to give RT the benefit of the doubt, as they have edited the interview to suit their purposes; they make Saudi Arabia appear to be meddling illegally in Syrian affairs, when, in fact, both Saudi Arabia and Iran view the situation as a religious one that transcends borders.

As for your other sources, Hal Turner is, of course, a Neo-Nazi with a clear agenda, and Duane Clarridge was indicted in the Iran-Contra scandal and charged with perjury. Why you chose to trust either of them is beyond me. (Although I can make a pretty good guess.)

As for the nominal topic of the thread, you seem not to have read my responses any more closely than you investigated your sources. Anyone with strategic sense could tell you that Saudi Arabia, Turkey, and Japan now possess nuclear weapons. This explains Japan's confrontational policies with China, Turkey's challenging Russia for regional hegemony, and Saudi Arabia's rush to expand its influence before Iran can solidify its gains and resume its own nuclear weapons program. The United States cannot accuse its nominal allies of violating the Nuclear Non-Proliferation treaties, but it can keep academics advised through controlled leaks.

My advice for you:

1) Vet your sources.
2) Track a story to its origin.
3) Verify the story through secondary sources before running it. Blogs running the same story do not count.
4) When confronted, double check your research.
5) When challenged, respond professionally and provide the necessary evidence.
6) Admit when you make a mistake and apologize.
edit on 22-2-2016 by DJW001 because: (no reason given)

originally posted by: Willtell
If this is true Iran will seek a nuclear buddy like Russia or Chinese or even North Korea.


Why not just buy them? I heard they stumbled upon a hundred or so billion recently, given by some terrorist sympathizer...or something.