posted on Jan, 20 2016 @ 08:06 PM
link
Looks like the Hillary Campaign is getting so desperate they are accusing the Inspector General investigating the email scandal of being a Republican !!!!

The IG was nominated by Obama himself and confirmed by a Democrat Senate !!

But that means nothing when people like the caliber of Hillary are the "targets".

Obama is in charge of the whole Executive Branch including the Justice Department who is doing the deep investigating.

If Obama wanted to get Hillary out of the picture, it would have happened already right?

Well you would think so.

Maybe the plan is to force her into a foaming nervous breakdown or something.

We also know the DNC is working in Hillary's favor, and you would think Obama has given the seal of good housekeeping on that as well.

And the best part is, the Campaign actually expects voters to believe everything they are told !!!

Clearly, the Clinton camp knows that its candidate is in some deep guano. If the investigation into her email server scandal had no "meat" to it, they'd employ their usual playbook and laugh it off. Hillary has a long history of chuckling at the "ludicrous" accusations thrown her way. In fact, she was doing so earlier in the year.

As history shows, when the Clintons finally realize they can no longer mock their accusers into silence, they fire up the attack machine. It's sad, predictable, and clearly a desperation play, but it's what they know. It worked with the Lewinsky scandal, so they probably figure they can make it work again.

As a result, the "vast right wing conspiracy" is back. Only this time, the evil right-wingers in question are Obama appointees. According to Hillary's press secretary, Brian Fallon, the Obama-appointed Inspector General Charles McCullough is colluding with Republicans to destroy Hillary's "inevitable" Presidency.

edit on Jan-20-2016 by xuenchen because: jealous seahorses

Ok so let us address an interesting issue here. How did Hilary get emails from a secret network to a private server which requires special hardware to even be able to communicate with the secret network? Even if they hadn't been classified top secret her emails should have been on a government server. Anyway you look at this she is in violation of ethical behavior in the work place. Also there is an fbi investigation into the matter " seriously bad news for her" If found that the information was above top secret like stated she should see jail time! Its a huge matter

It is going to be great watching her campaign crash and burn, I am actually becoming hopeful that this psychopath will end up behind bars!

If this isn't an indication of the US having a ruling class that follows a different set of laws than the rest of us, then I don't know what will.

originally posted by: randomtangentsrme
I'm wondering if this is Obama's final insult to Hillary.

Anything goes with Obama.

Maybe it's a way of torture and loathing hate mongering.

He never says the inspector general is a "stooge" the journalist said that, brought it up and put those words into the man's mouth.

If the emails are what the spokesman claims they are, then the inspector general is indeed on a witch hunt and the details are being intentionally distorted to serve a particular political agenda...the GOP's.

The fact that the inspector general won't give any details and is being intentionally shifty/dodgy speaks volumes.

If Clinton forwarded something leaked by Wikileaks that was published to the public, is that that some heinous crime? Isn't it twisting the truth and bending reality to say that her emails contained "super-duper-top-secret material"?

Sheesh, we ALL read those articles that contained leaked SAP details. Why is Clinton somehow not allowed to read the media, or share her thoughts on the what the media is talking about?

And seriously dude, Herman Cain's website? Talk about bias and spin. This isn't a credible source for straight-forward information by any means.
edit on 20-1-2016 by MystikMushroom because: (no reason given)

Ahead of last night's Democrat primary debate, Hillary Clinton was on CNN for an interview with Jake Tapper. As any responsible journalist would, Tapper asked Secretary Clinton about the criminal investigation involving her email. This is what one might call a journalistic "no-brainer." But for Hillary, it was clearly a great offense.

Yet, oh, she is so offended the "news press" dare ask her a direct question!
*rolls eyes* 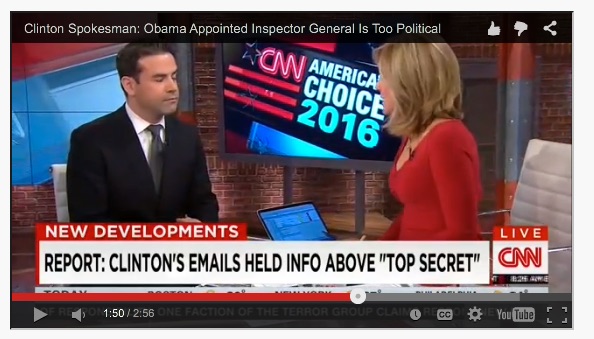 I find the timing of that odd, with Hillary's potential crash. Hmmmm, wondering if Obama is setting the Clintons up? The cannibals are getting so desperate they are consuming their own!

Talk about the "Greatest Show on Earth!

Hillary will say and do whatever it takes to win, she has no honor, no respect for anything that stands in her way.

When wiki leaks happened every one in the DOD was informed that the information was still classified and anyone caught accessing or possessing it was subject to punishment under the ucmj and any other applicable laws.