That weather report should prove very helpful to those impacted in India. Thanks for posting it.

Unfortunately, the latest figures from earthquake-report.com are reporting 23 fatalities and 252 injured.

This short video shows some of the damage:

posted on Jan, 4 2016 @ 11:52 AM
link
a reply to: bkaust
No, again (3rd time since moving house) didn't feel it.
Bit of a surprise how the construction and location makes such a difference.
Previous timber house was on wooden piles/foundations, the ground was built-over sand dunes, 500 metres in a straight line from the shoreline, we used to feel most quakes over 3.6 within 100km, high 4's used to rumble in like trains, 5's came through with a thump and a wobble and with 6's the house felt like it was sitting on a huge waterbed or was shaking to pieces.
At the new location 1.78km from the shoreline, the timber house is on a concrete pad, the ground is old river bed.
I dug some holes to plant fruit trees and only got 4" deep before hitting river stones, ended up needing a big metal bar to get the rocks shifted to make a hole.
We haven't felt any earthquakes since we have been here, incl. a 3.7 and 2 x M5's that others in the general area felt.
Downside is that in extreme circumstances we may be prone to flooding, our street shows on the Council hazard map as the route for any extreme river overflow and 3 properties each side of us (and us) are marked as "ponding".
That probably means liquefaction in a big quake. There were reports of such from the 1855 M8.2.

*Just had a look on the felt reports for that 5.1, only 2 from Waikanae. So looks like felt more on the eastern side of the Tararua Mt's and Palmerston North.

B. I should probably post this on the Yellowstone thread, but I'll post here anyway. I may comment there as well in more detail. There's activity. Or, the ice is cracking big time. I'm having a problem rejecting the idea it's earthquakes even though they aren't listed. These appear to be earthquakes. And, they're back near LKWY. They have one posted for Dec 29th, and I think I saw that one and these look like those. There were more than one.

C. I think Northern Nevada is relaxing a tad.

I'll post shot of squiggly lines in a moment.

Also, I think this station is a borehole and shouldn't be so sensitive to ice. But what do I know. 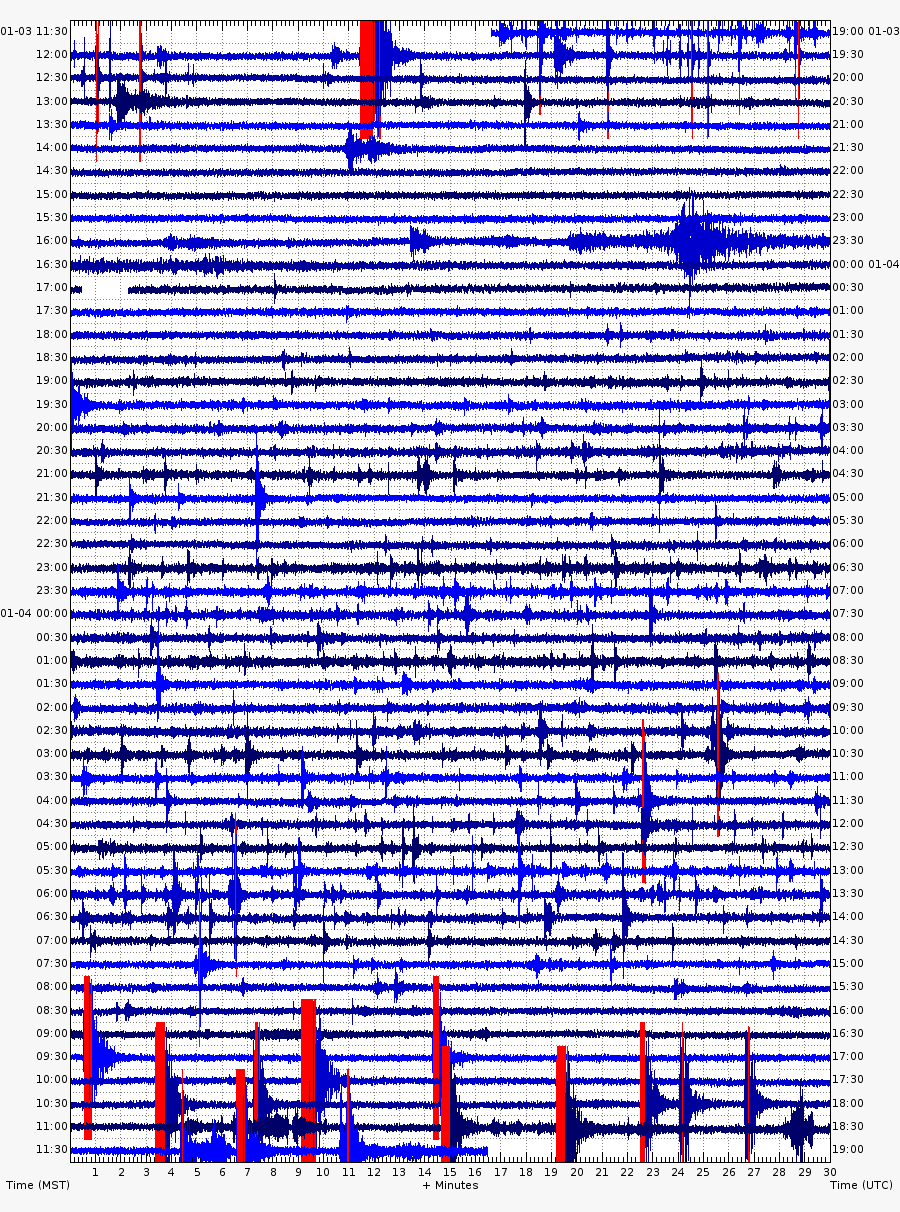 
Please, please, ignore this next bit. I'm feeling edgy. I'm feeling like it's 2007/2008 all over again. Except this time, everything seems more compressed.


Oh, ignore that but don't really ignore this, I think the 6.7 in India was a leftover from the big Nepalese earthquake.

This link is definitely from a borehole station, PB208, located very near the LKWY seismometer.

After checking other seismometers in the Park, and not seeing much, I think these are very small quakes.
edit on 1/4/2016 by Olivine because: adding a thought

originally posted by: ericblair4891
A. Puterman has to be sick, or he may have a family emergency. Otherwise, he'd have appeared by now, or, someone would have had contact somehow. I am sad.


I sent an e-mail to him inquiring as to the circumstances of his non appearance here.
I haven't heard from him since 06/08/2015 regarding not touching Windows 10.

originally posted by: ericblair4891
C. I think Northern Nevada is relaxing a tad.

But long term its still showing no real signs of abating.

*rightclickviewimageforfullsize that 2nd ones quite wide.

It is but a scant two hours.


originally posted by: ericblair4891
A. Puterman has to be sick, or he may have a family emergency. Otherwise, he'd have appeared by now, or, someone would have had contact somehow. I am sad.


I sent an e-mail to him inquiring as to the circumstances of his non appearance here.
I haven't heard from him since 06/08/2015 regarding not touching Windows 10.

Hi All. Actually I have been incredibly busy and something had to give - and that was Quake Watch (and I did not take my own advice Muzzy and have installed Windows 10).

I had a cataract op a few days ago because I was almost blind in one eye and that may have had some bearing on things, but I have also acquired two dogs (strays that found me) who need many hours of walking every day so currently i am clocking up between 7 and 12 miles a day in the hills.

The other eye should be done soon and than I should be able to see the screen even better!

I am still tracking quakes as you will see from my own Quake Watch thread on Wordpress, so I am not far away. I cannot promise to be as active as I was but I am still around.

Good to see you. And glad to hear your health is good. A friend of mine had a cataract procedure some time back and was very happy with the results. It really helped them alot. Hope yours go well.

Animals in need, finding you.... Tells me you are a very blessed person. You have two new angels at your side.

I was going through the archives here at ATS, and tried to click on to your site. Didn't have any luck. I just thought maybe you had abandoned it. Will go and check again. I have learned alot from you and I am very greatful for your guidance.

I have been keeping myself busy watching the Pacific North West and the Canadian West Coast. ALot going on around there. The geologic history of the area has got me doing alot of reading.

Please don't be a stranger. The place just isn't the same without you.

Just checking to see if you were alive. After I had seen, that you last logged on around Halloween, I began to wonder.

Oh, Puterman, in your will, have your agent aware of your password and account here on ATS, and God Help that day, you have your agent come out here and sign out for good. You can't disappear and not expect us to be confused and worried.

And good luck with those walks. My religious faith is declared as Pedestrian. I don't own a car. Those dogs you adopted will make you live longer.

Wow, I was within the half hour window of time for editing. I think the Yellowstone stuff was ice. But not sure. I was waiting to see if the signals came back today around the same time. Usually, it's midday if it's the ice. The weather temperatures and the sun change the ice and it will contract or expand. So far nothing.

quiet
Also, I'm looking toward South America. Along with Puerto Rico and the other islands, it's been kinda bumpy on the eastern side of the usual off the coast variety of earthquakes. The ocean is quiet, and inland it's bumpy.

I'm sorry, my brain is ping ponging. I wanted to add info on that British Columbia earthquakes. It appears that the 14 month cycle is responsible for the earthquake. The 14 month cycle are related to slow earthquakes. That seems to have happen a week or so before the following, not so quiet earthquake. Hmm. I only thought of it because there's a couple of tiny bumps nearby in Washington State.

Here's an article on the B.C. earthquakes, and a bit about that demon_ fracking.

www.theweathernetwork.com...
According to John Vidale of the Pacific Northwest Seismic Network, a 'slow slip' had been under Vancouver Island in the week leading up to the event, and may have played a role in the 4.8-quake, KUOW reports."
"
edit on 5-1-2016 by ericblair4891 because: (no reason given)

Missed you, Sir. Heal quickly, and walk those pups with vigor!

Drop in when you can.

Hello Puters! *waves*.
So glad you popped by *big hug*

This is really intersting.

You must be a kind and generous soul for not one but two dogs in need to adopt YOU! They sense who will care for them--enjoy those walks (and the good health it will bring to you as well).

I really should learn NOT to check headlines when I really need to sleep.

Why worry? NK can only have a small bomb and they do say they won't us it unlike some other powers with enough to ruin the world for ever many times over who continually tout the use of such weapons.

EVERYONE should destroy ALL nuclear weapons, especially countires most likely to use them.

I do find it interesting that the news media say that scientists are checking to see if this was a nuclear explosion, a successful one, despite the fact that the seismic signature obviously says it was and it only has a depth of 0 + or - 1.8 km. 5.1 sounds about right for an underground nuke. I have not looked at the traces yet - I am getting the waveforms as I write.
edit on 6/1/2016 by PuterMan because: (no reason given) 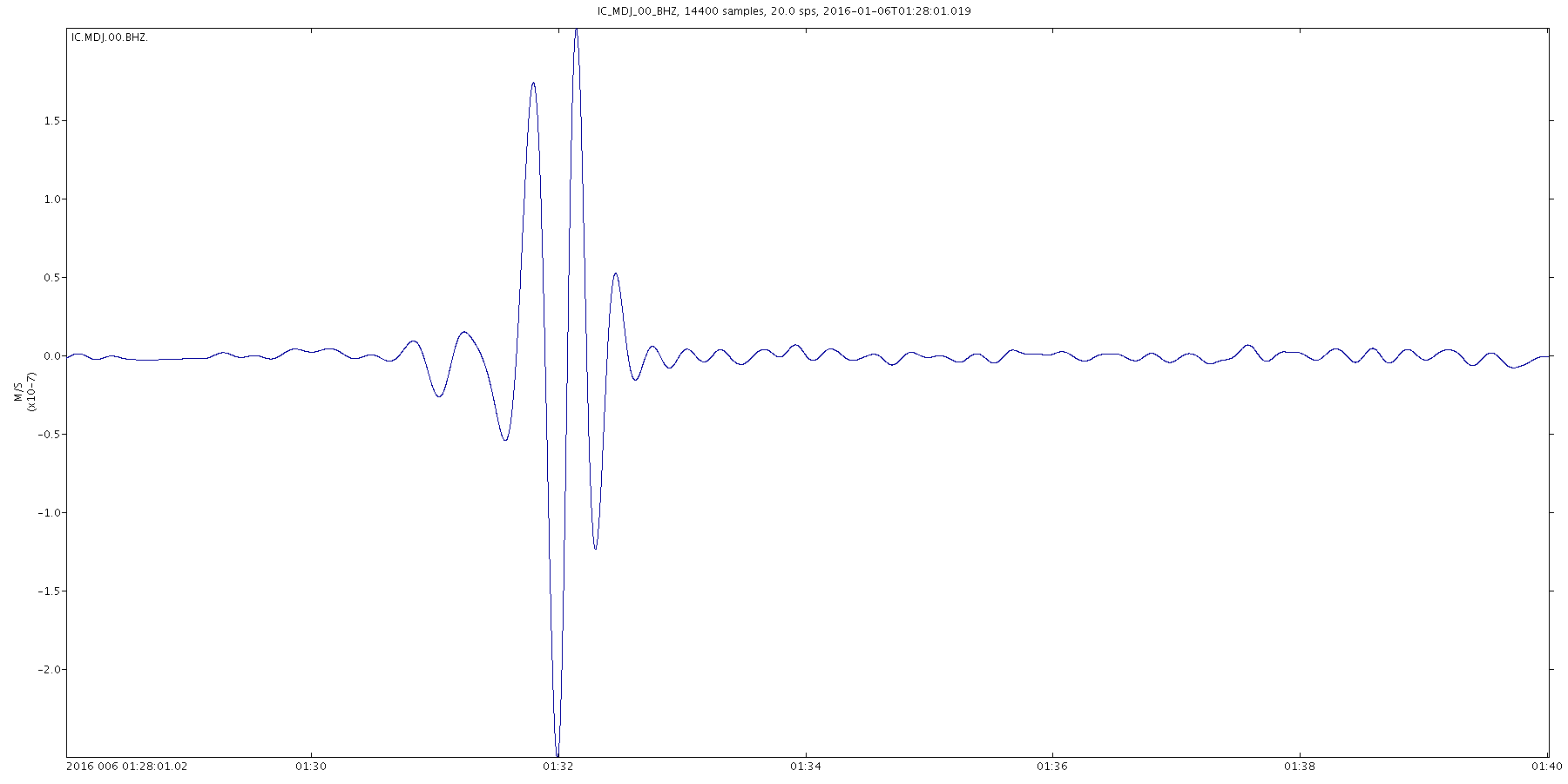 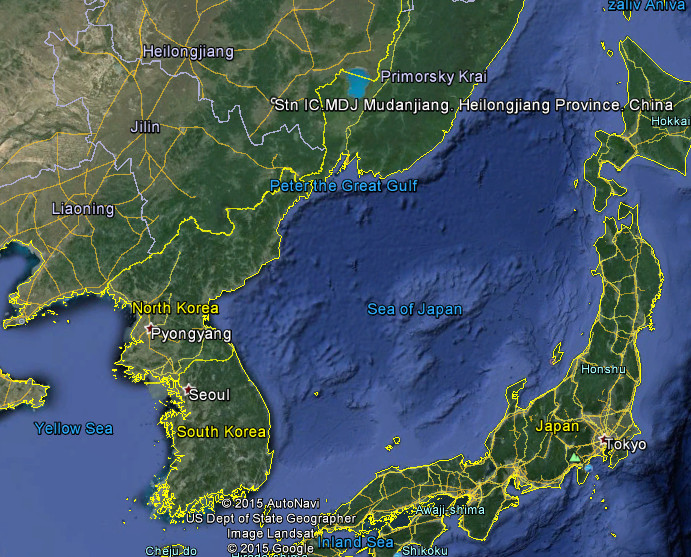 And from INCN.IU.BH1 via Wilbur

And you can hear it as well from INCN

edit on 6/1/2016 by PuterMan because: To add the QVS Seismo Sounds image and sound file


And just in case WAV file make you freak out, here is a zipped mp3 version so you can put it on loop and jog to the Korean nuclear beat.


And finally for today another version from the MDJ seismo - a zipped mp3 file of the trace at a lower frequency.

edit on 6/1/2016 by PuterMan because: To add yet another boring sound file that only really interest nerds like me.