All that water lubing up the fault lines maybe.
earthquake.usgs.gov...

No fear and Stay safe!

Good job we don't get earthquakes here then.

Yet another batch of Irish wet winter weather going overhead. I believe we have had a years worth of rain this month.

We are all very clean and wrinkly.

originally posted by: PuterMan
a reply to: paradoxious

Good job we don't get earthquakes here then.

Yet another batch of Irish wet winter weather going overhead. I believe we have had a years worth of rain this month.

We are all very clean and wrinkly.

I think the train of thought here with these areas and quakes, Devore and Banning, is they're at the bottom of rather large mountain regions along the San Andreas Fault, with both areas between the San Andreas and San Jacinto fault zones, although tens-of-miles apart. We've had a rather dry few years, as many know, so, getting hit with a statistically significant amount of rain in a short period might be putting a little extra weight on these areas as well as 'lubricating' things.

I'm slightly hesitant to put much 'weight' into the lubrication thing since the area has a substantial amount of ground water / aquifers: much of the region around Riverside and San Bernardino sources drinking water from the ground rather than piping in from elsewhere, arguable caused by the considerable faulting in the area. Now, perhaps the extended draught conditions we've been in have depleted enough water without causing a moderate quake to permit conditions where the added weight on top could cause sudden quakes?

For now, I'm entertaining the thought the Devore quake group could be considered foreshocks to the Banning one despite the physical separation, particularly considering the relative dearth of fore or after shocks to the one in Banning... two < M1.0 and two > M1.0 preceding and one 1.0 following it within 10 miles over the past 24 hours (from Jan 5, 2016 19:00UTC through Jan 6, 2016). Even going to 7 days, the number doesn't increase dramatically, perhaps 15 quakes within the same radius, most all below M1.5.

much of the region around Riverside and San Bernardino sources drinking water from the ground rather than piping in from elsewhere,

That aloe can cause quakes, and yes so can excess water. If you consider that an inch of rain such as is forecast for us over then next few hours is actually 101 tons of water per acre, it doe not take long to build up substantial weight - good for flooding, landslides and yes earthquakes (but not here as we have been soaked for so long so permanently another few hundred tons makes no difference!).

Trying to insert a video about quakes in oklahoma for the last 6 months, seems to look like some tunneling activity.

This is the first time I have noticed something on the USGS listed as a nuclear explosion, so I thought it was worthy to add to the thread.

needs an update though, last N. Korea one listed was 2009, I think they have done 2 since, not including this last one?
sure there was one last year too.

Yes. USGS finally has it listed. 15 mins it took them. smh


Here is a link to the Clayton, OK seismogram below: Link 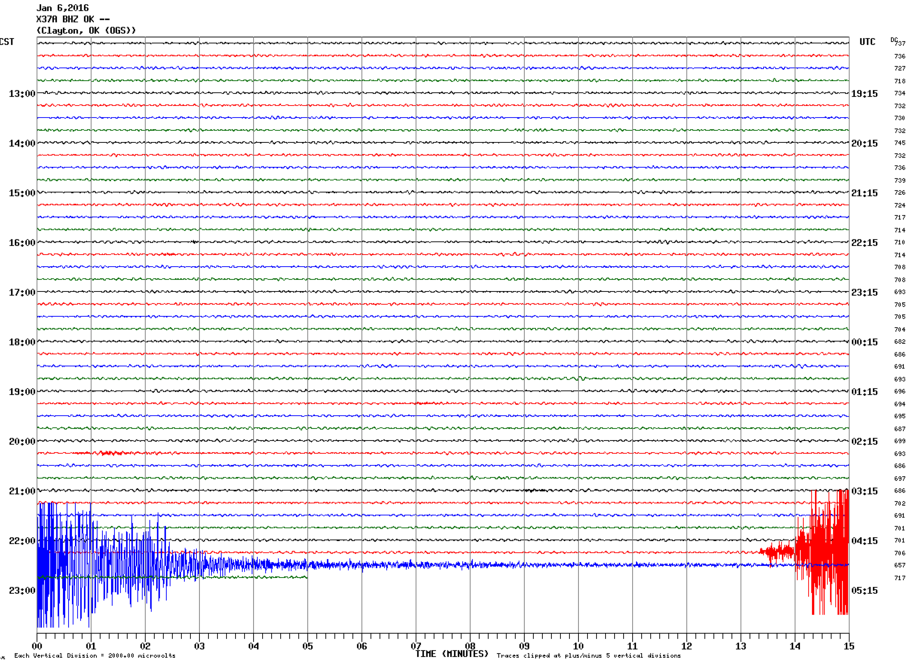 
This Link to the Mooreland, OK seismo is better: closer to the epicenter.
edit on 1/6/2016 by Olivine because: (no reason given)

wow, had to screen shot it...dunno why.
lol 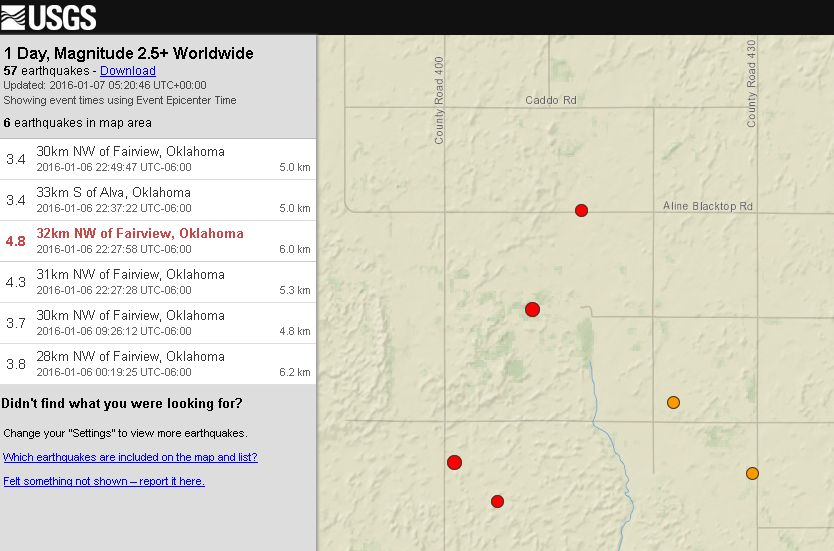 posted on Jan, 7 2016 @ 12:01 AM
link
a reply to: Darkblade71
change that map to satellite view and zoom to 3km/ 1mi, and you will see all the fracking pads there.
With the price of oil at the lowest in a decade, why do they bother messing with the crust

I thought I had read somewhere not that long ago that it is possible they are accidentally activating prehistoric fault lines while doing all of this fracking. Honestly I dunno, but jobs I think would be the main reason to continue fracking while oil prices are so low.

Maybe someone is hoarding that oil to sell later when prices go back up.
Or maybe the gov is buying it and quietly stockpiling enough for ww3...lol

No Me (energy) reading from IRIS yet, odds are it would be over M6

JMA are calling it 5.6ML, which is unusual that its lower than Mw, for the High Sensitivity Seismograph Network Laboratory have 5.7Mw.
Quite a few aftershocks at the "N PHILIPPINE BASIN" as NIED have called it, 49 so far.

i don't know where the Global Networks got "Southeast of Shikoku, Japan", if you look on the map, if anything, it is SE of Kyushu
and S of Shikoku.

edit:
OK I will let them off this time FE237-southeast of Shikoku is a funny shape, and the 5.6 quake falls within the borders

There is a question that needs asking.

If there is worldwide glut in gas and oil, then why are the earthquakes in Oklahoma rising?

This makes no sense. There are layoffs in the industry. Companies are reducing production because of the glut and the low prices that this has caused. There should be fewer earthquakes. There are no other epidemic of fracking earthquakes anywhere else at the moment. Yes, there are some in Texas, etc. But nothing like Oklahoma. Something is different.

Theory. It is a grand experiment. They are continuing to pump waste water despite the excess in supply, in order to fill up the ground as much as they can with wastewater in order to rupture a fault in order to find out how much pressure it takes to do so. It's a pressure test. Or, they're trying to create a disaster in order to create disaster economics.

Or, no other place wants all the waste water and Oklahoma is importing water from nearby states and they have now become a big toxic land (or I should say "water") land fill.

And I'm back to Oklahoma. I'm always being a wise ass and saying, "The More You Know...", just like the cliche' and slogan. In a mocking way most times. And now is one of those times. The more I know, the less I wish I knew. The idiots in Oklahoma are defying attempts by regulators to stop the pumping.
www.news9.com...

The company is in debt and can't stop pumping. They're going to run the pumps until they go bankrupt, or legislator use legal means, or they create a 6.6 and kill people. I want to use foul language. So, I'll use this a cue to leave my writing fingers alone now.

IRIS are showing MB
both at 4.8MB
First quake page
Second quake page
near impossible to split the traces
here I superimposed the 2nd quake (red) trace over the first (blue) trace from Hockley, Texas (IRIS) with the timemarks set on top of each other

edit: AAaaargggh
After I posted all that here I clicked on the link for the first quake MT, now it's showing 4.42 ??!! WTF?
and 9km deep

From what you can see, do you see any other kind of noise, other than an earthquake?