posted on Jan, 7 2016 @ 06:31 PM
link
It's been an active last few weeks in Oklahoma. Quakes a few days ago in Edmond damaged people's homes - people who have money and means, rather than rural folks out in northern Oklahoma.

It's interesting... I had never felt an earthquake until about 6 years ago. A little tiny tremor that I barely felt at my college and mostly noticed because a thing hanging from the ceiling in a lone corner swayed back and forth a bit. A few after that. Then there was the 40+ second long 5.6 quake in 2011. It keeps growing and growing...

Worst for me was 2014. In February, we kept having quakes during this one week... dozens and dozens of them. We counted something like 144 in 5 days, all little jolts - the ones that showed up on OGS or USGS weren't nearly as many as we felt. They were with in a mile, and booming.

Then it quieted down for us - until we got hit by a M4.2 two miles away that broke a bunch of dishes, made nails pop out of the drywall, and cracked ceilings and walls. That woke me up with a booming and breaking. It was a novelty for awhile, but now it's almost normal.

And I want it to stop.

posted on Jan, 7 2016 @ 09:51 PM
link
a reply to: Greven
There is no doubt whatsoever those quakes are caused by Fracking (man induced).
Likely there will be some M5+'s to come yet.
replacing oil ( lubricant) with salt water (a crystal) in Fracking is like injecting a sore knee joint with cortizone, the pain will go away very quickly (oil barons and IRS make a quick buck in the case of oil fracking), but eventually the pain will come back and be many times worse (local people subject to years of earthquakes, if not deaths)
It is your country, you do something to stop it.
Waiting for the Govt. to do something is pointless because they rake in the taxes, and probably royalties in some cases

That's correct Muzzy. I saw this article from MSM and just wanted to post it as support of the view that fracking is the most likely culprit.

A state report last year noted a connection between hydraulic fracturing and some earthquake "swarms," and state officials say there's a potential risk to the public due to the increase in quakes. Experts say the quakes are likely being caused by injection wells, which are particularly deep wells into which drilling byproducts and wastewater are injected, rather than wells drilled to extract oil or gas.

I have been kinda expecting something bigger to happen further south.

I am not predicting, I am just writing my throughts.

posted on Jan, 9 2016 @ 08:27 PM
link
They've shut off the earthquake machine in Oklahoma. There's only one for the last 24 hours. The heat was finally getting to the pumpers and they must have shut down pumping. I haven't looked up info about whether regulators have stepped in and order shut down. They were threatening the drillers. I'm lazy. So, go look it up for yourself. I'm trying not to get fixated on Oklahoma again.

Funny thing, and the reason for my writing is that there was a 3.8M in Texas. I'm not looking that one up either. I'm just going to be arrogant and ignorant and blame it on fracking in any case. 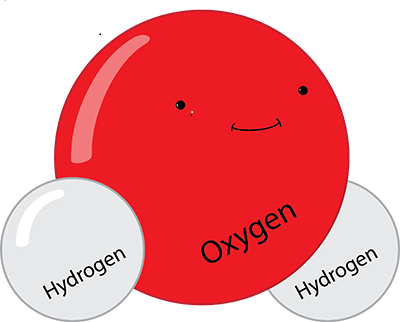 I like water. This little molecule packs quite a punch. I mean it's everything to us. Water can cause an earthquake. The pressures water can create are amazing. And these two elements are volatile. I mean hydrogen on it's own. That is if you use it to blow up a bomb. And oxygen, it can turn solid iron into dust, as well as feeding fire.

Energy released by the 5.6 and aftershocks so far (3823.85TTNT) was more than for the entire N Philippine Basin region for 2015 (287.39TTNT)
In 2015 most of the quakes were further to the south west towards the Ryukyu Trench. Bing Map of those here sorted by date

Looking at the location of this series on the Philippine Plate (PP), which is sub-ducting the Asian Plate at this location, I'm wondering if it is not some after effect of the 13/11/2015 x M7.1 which is only just still dying off (with 7 aftershocks on the 7th Jan UTC) and is only 400km NW on the Asian Plate.
i.e. prior to the 7.1 the PP was stuck, then it slipped (the 7.1), now the 5.6 is accommodating that NW movement back at the underlying plate.
I don't think this 5.6 will have a long aftershock series. 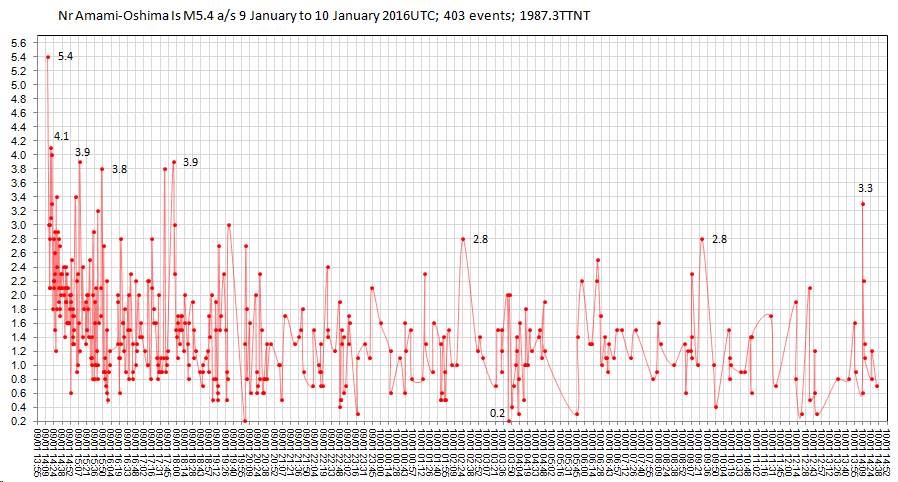 Just got home and we had some 6+'s today.

Off shore and not showing any immediate damage or concern as far as I have read.

Then there was this one. No tsunami warning as far as I can see on USGS.

Although as far as I can see at this point, it was felt. Gotta do some more checking on this one. 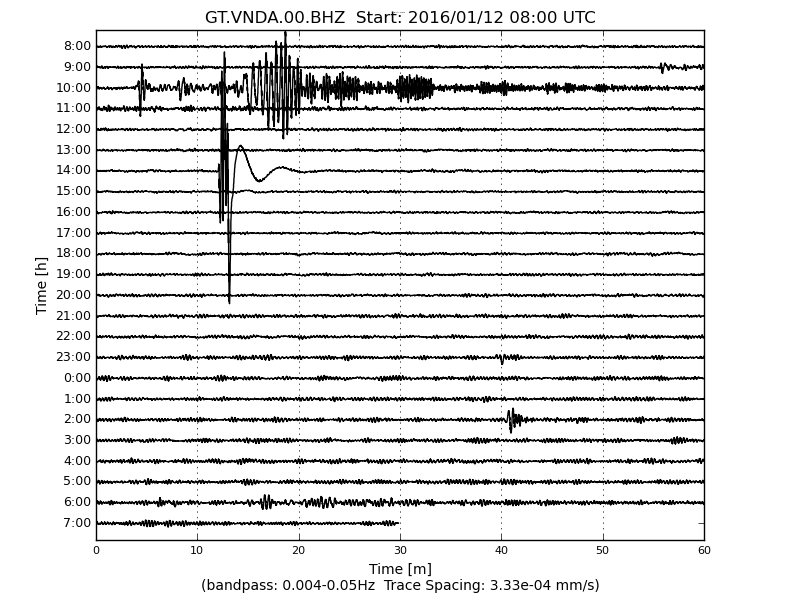 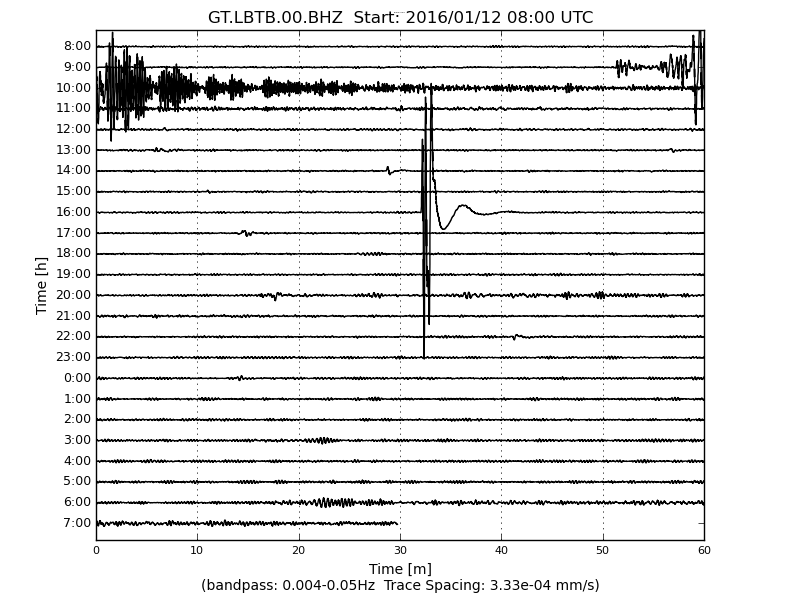 I had a look through the main Global Networks, nothing, not even LDEO who often catch stuff down that way that the others miss.
What is unusual is that if they were in that Indian Ocean area between the two locations, why doesn't CASEY, Antarctica show them too. earthquake.usgs.gov... (they will be gone from that page in a couple or four hours)

Could be local quakes, close by each station.


IT HAS VANISHED! But I was not imagining it!

Could be local quakes, close by each station.

That would be my guess. They are definitely local from the signature.

posted on Jan, 13 2016 @ 10:15 PM
link
Earlier tonight, I was going to comment on the small clustering in central Asia. Then I thought, forget it. Just cause there's a cluster, doesn't mean there's going to be more action. I thought South America was chiming in.

Then two over 6 m just happened.

But here's the funny part, they were seconds apart. 7 seconds to be precise.

posted on Jan, 14 2016 @ 03:08 PM
link
Large quake swarm in Tjörnes Fracture Zone in Iceland. There seems to be 3 different activity spots. There has been 130 quakes during the last 48 hours, strongest quake 2.8 magnitudes. The quakes are rather weak currently. originally posted by: ericblair4891
Earlier tonight, I was going to comment on the small clustering in central Asia. Then I thought, forget it. Just cause there's a cluster, doesn't mean there's going to be more action. I thought South America was chiming in.

Then two over 6 m just happened.

But here's the funny part, they were seconds apart. 7 seconds to be precise.

Here is a map of S Off Urakawa area ( a JMA region) with the 6.7 inserted shown ( as a star) amongst all the quakes for this region in 2015.

Graph so far. I have set it to 5 days in anticipation. 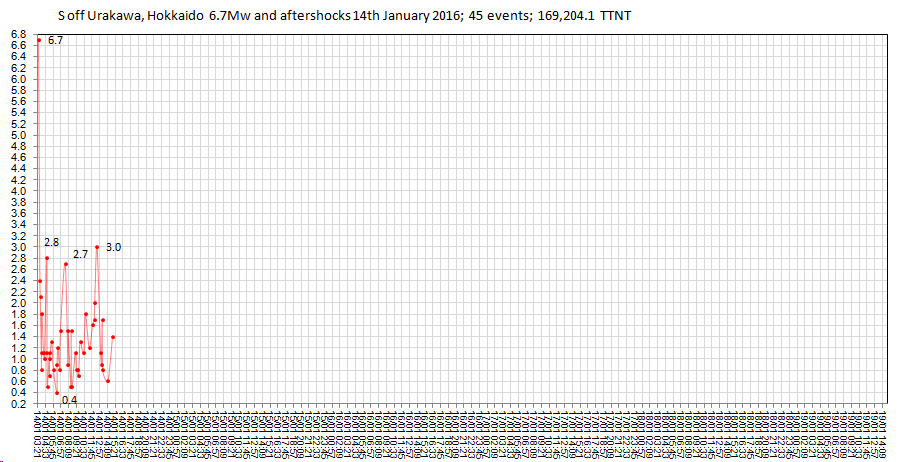 posted on Jan, 15 2016 @ 02:45 PM
link
here are a couple of recent 5 day graphs for comparison to the above and what may be in store from this one
The Philippine Basin and Kyushu series' seem to have tapered off, both down to just 3 quakes each in the last 24hr download.
Kyushu is at 60 days elapsed time now. page 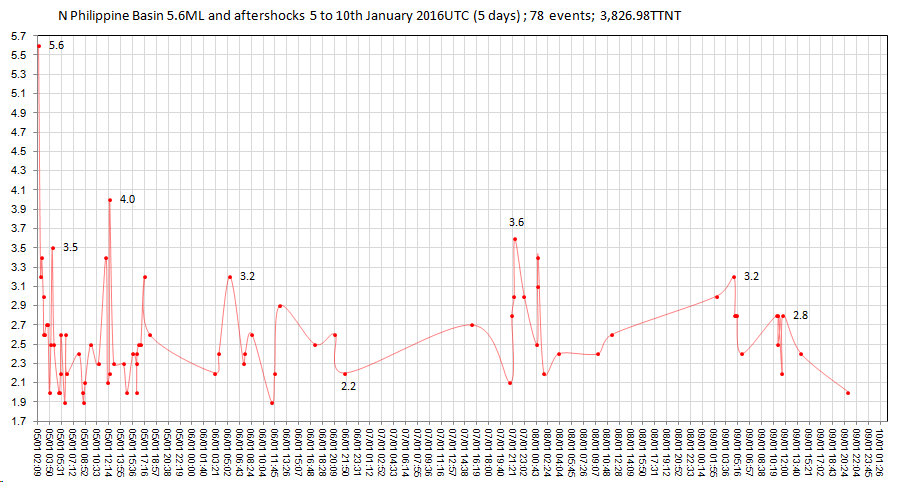 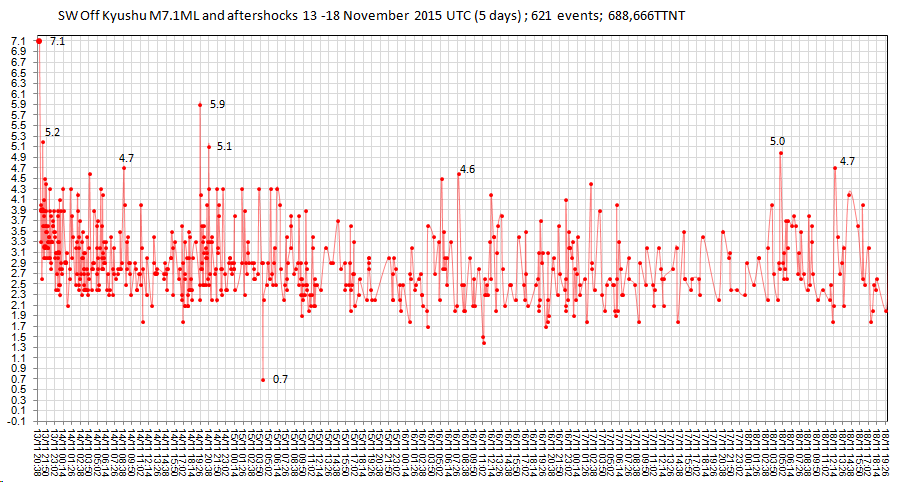 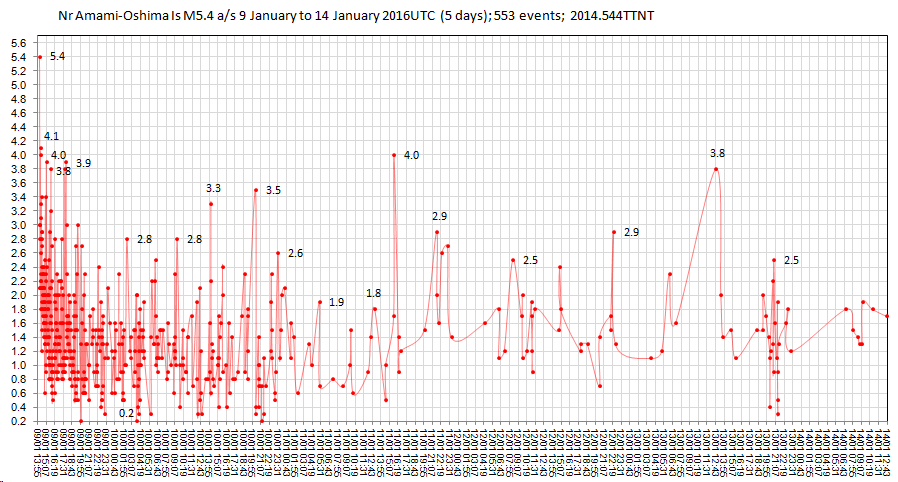 rightclickviewimagesforfullsize
edit on 01000000141416 by muzzy because: (no reason given)

Hopefully that a good thing