(Sorry for the edits and double posts...I'm new.)

I gave that one to ya.

This area is known for having large 7+ quakes

posted on Mar, 20 2016 @ 03:41 AM
link
Haven't been on ATS for quite awhile, but still keep a watch on global quakes...gut feeling says that this year so far is experiencing very low quake activity. Is anyone keeping an energy tally?

Nice to see you

Puterman has that info on his WS. This is just the link.

posted on Mar, 23 2016 @ 02:09 AM
link
Been pretty quiet in NZ since the Yarra River, South Marlborough M5.50 on 14th Mar, scratching around to find any M3's, let alone 4's, even at the Kermadecs.
So when its like this you search around for Swarms.
Those of you who read Geonet may have seen this one WikiteValley-Te Kopia Swarm First part was on 21 Feb, second part further down the valley on 20 March.
I've taken it a bit further, Interactive NZTopo Map and Bing Map, Energy Released ( not much, less than 5 TTNT), and a Timeline Graph here 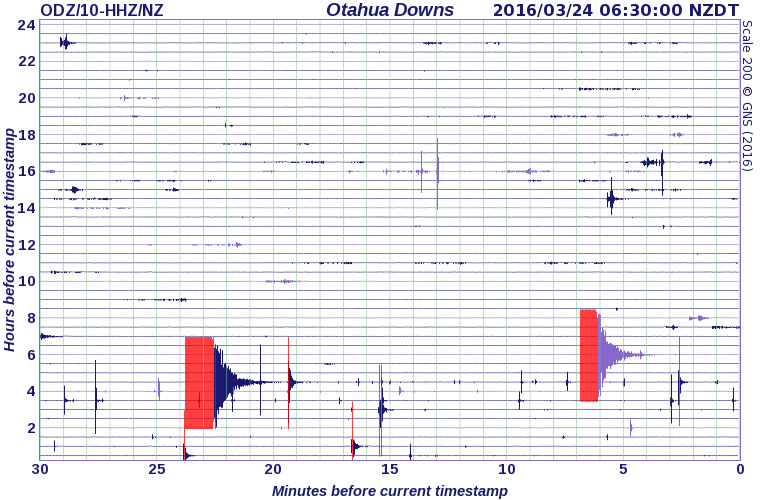 Speaking of Black Cap's and Cricket aren't we doing well at the T20 World Cup in India?
BTW Taylor got 36 not out.
Against Pakistan, who also featured the same day on the EQ lists with a M5.5
Maybe it was the foot stomping of the fans back home in frustration when NZ beat them

posted on Mar, 23 2016 @ 01:00 PM
link
a reply to: ElGoobero
yeah a few.
I was looking at Geofon earlier, last 23 Global quakes listed were less than 5.
It's only been a day since a 5, but it appears GFZ are going into more detail (lower magnitudes) in their searches a lately, places like Cyprus, Sweden, El Salvador etc
geofon.gfz-potsdam.de...

posted on Mar, 23 2016 @ 01:26 PM
link
I must be getting old. I can't remember what was up with a bunch of earthquakes, a couple of years ago, near Hawthorne. I remembered that there is a military base near there. If I remember correctly, there isn't fracking near there. But I'm not sure.

Why hasn't anyone mentioned these? I'm paying attention to Mombotombo which at the moment is having some cool tremor after a long pause. It's gonna blow again.

Because I haven't been paying super close attention, I'm not sure but I think there's lots of miro activitiy all thoughtout the south west USA. It could be I'm not getting a good picture because I've stopped using the USGS so much and have primarily been using Volcano Discovery. They all have different sources and nothing ever seems to match another listing organization.

I know why you get frustrated Muzzzy. Oh Muzzy, since I've switch my source, it seems that there are tons of earthquakes near Mexico. Are there always lots and lots or earthquakes off Mexico? I'm making the assumption that many of these aren't showing up on USGS and when I see them in total it only seems like a lot.

Ug. If you can quickly look at your records and sources and tell me if it's busier, or if it's that the the different sources make it seem busier.

Oh, as for Hawthorne, BOMBS maybe???

Jeez, I should have checked the Mexican sources directly. I forgot they have a pretty good system as I've checked there before when watching Popo. I was asking you because I wanted to see if you could see an increase lately. I've noticed that compared to last week, they have decrease, so I'm thinking, there was a uptick last week. I know they get a lot.

On the other subject of Hawthorne, I found out when the last big swarm was 2011. I'll post an old new article. Interestingly, Northern Nevada picked up slightly. And even Idaho, near Challis had a tiny one.

In the report it said that the 2011 earthquakes were tectonic. And then it explains why. But it isn't always the case that volcanic forces cause long rhythmic- harmonic earthquakes, that's just magma moving. However, if a large amount of magma is moving slowly or expanding slowly, the outward pressure exerted on the hard crust would cause sharp tectonic earthquakes. These pressure events would cause small earthquakes which would then resemble swarms of very small earthquakes. This is the pattern seen in Yellowstone swarms. And, this is the patterns I've seen in Idaho and Nevada.

It's like fracturing, or like the geothermal plants, the pressure of fluids in the crust cause swarms.

In each area, there has been past volcanic activity.

And here's a graph from yesterday's Mombotombo showing harmonic tremor. The magma is moving and this volcano is filling up. I'm expecting it to blow soon.

Oh and to go back to Hawthorne, the epicenters are in a different place. And there's two areas affected at the moment if you add in those earthquakes by the lake.
Ha, and I thought I was crazy, wait, I am. oh well, there's been two more tiny ones in Idaho. As I've been saying, the uptick we just had in Northern Nevada is related to Idaho. I've made that tenuous connection. Not I want to elaborate and say that Hawthorne is also in the mix. Heck, just look around Hawthorne and you'll see the very dramatic past. Volcanic craters everywhere. Heck, we thought Idaho looked like the moon landing site, well, you can find some spots in Nevada that nearly fit the bill.

Let's just say my wildest imaginings are nowhere near true. But let's say some of it is true. Let's say it's volcanic, but not eruptive. Meaning, the magma is moving, but nowhere near the stage to erupt in the near future. Maybe the maybe is just moving around like it does under Yellowstone. A circulation of sorts. Since the crust is thin in some of these western North American parts, that movement is causing stress fractures, and some aquifer heating and circulation. Actually, I think I've written some of these same thoughts before. So, I should stop. I'm just stating that these are connected and due to fluids heating and cooling.

posted on Mar, 24 2016 @ 02:00 PM
link
a reply to: ericblair4891
Eric, Not sure what time period you were looking at or thinking about.
I went back to Jan 1 for the graphs below.
The magnitudes are rising slightly (Black 85 day trend line on Timeline Graphs below) and the Daily Numbers Count did spike on day 23rd March (2016 Daily Count Graph below).
So that was probably the increase you seen.
rightclickviewimageforfullsize

Looks like the increased numbers may be due to better technology, picking up more and more quakes, probably those offshore one's,
Also noting not many big quakes in the last 4 years.
SSN Data goes back to 2006, I'll have a look at the rest tomorrow.

I won't go with a whole year graph for Mexico, because the magnitudes are only from 3 upwards, with a few exceptions, the timeline style is just a blur of red dots with a few bumps in it for a 12 moth period.
edit on 03000000838316 by muzzy because: (no reason given)

Hi muzzy,
I had a question. Did you look into the southern Spain- Mediterranean Sea quake activity? Do you have any stats or graphs on that?
This year has been pretty strange over here in terms off frequency/magnitude of the activity in that region.
I don't recall it to be that often in previous years. Is it possible there is a relation between the volcanic island 'Isla de Alborán'?
I don't know if you have any information regarding or maybe you can link me to someone who has?
Thank you.
I.F.