Yellowstone Apocalypse: Geologic Evidence Suggests There May Be Little or No Warning

originally posted by: AlexandrosTheGreat
a reply to: TrueAmerican

You seem to know a he'll of a lot more and understand a lot more about this than I do so answer me this...you know a "shunt" I think is the term (put into the cranium to release pressure???)...is there any technology like that they drill into volcanic areas to fix problems and lower risks regarding possible upcoming erruptions? Thanks for your time.

Well I see what you're getting at, but unfortunately in a pressurized volcanic system, relieving the pressure ironically could have the OPPOSITE effect, and CAUSE an eruption. Because it is pressure that keeps several things in check, including the magma and gas content. In fact, depressurization is in effect a major catalyst of many volcanic eruptions. And especially in rhyolitic, explosive eruptions. Rapid depressurization snowballs quickly and boom. So to answer your question, imo, no. A "shunt" could be devastating in Yellowstone's case. Besides, it is so massive I seriously doubt one could be installed even if they wanted to.

posted on May, 1 2015 @ 09:47 PM
link
a reply to: TrueAmerican
I enjoy following your thread TrueAmerican. Had a question pop in my head that you may be able to answer. Is magma/Lava magnetic? Is there a device that can measure earths natural magnetic field and detect the flow or movement of magma underneath the crust? A possible way to detect future eruptions? (my knowledge in geology is very minimal)

That's a complicated question. I suggest you google magma and magnets to better understand the answer. In short, the answer is: partially, and particularly in iron-rich magma. Some minerals like magnetite lose their magnetism when heated, so until they are erupted and cooled, they may not be magnetic at all while at the high temperatures deep in the earth. Interestingly, scientists used the alignment of magnetic particles in erupting magma with earths magnetic fields and poles to basically prove seafloor spreading at the Mid Atlantic Ridge. To what extent magnetism has any bearing on Yellowstone studies would be a question I could not answer. That's for people that know way more than me. Email a couple of researchers if you really would like to know.

posted on May, 1 2015 @ 11:31 PM
link
Well if that's the case, I see no more need to keep running threads of earthquake swarms being precursors.

posted on May, 2 2015 @ 12:02 AM
link
We should just drill into it from the other side of the earth and drain some magma out of the bottom... like a gigantic drain plug.

originally posted by: Answer
We should just drill into it from the other side of the earth and drain some magma out of the bottom... like a gigantic drain plug.


originally posted by: Answer
We should just drill into it from the other side of the earth and drain some magma out of the bottom... like a gigantic drain plug.

Since when has "that's a bad idea" stopped us from trying something?

originally posted by: iLikeCIAnot
a reply to: TrueAmerican

That they should just nudge Yellowstone

This made me laugh.

Good luck with that Russia.

If any one of the 10 super volcanoes in the world pops, the human race is so #ed.

posted on May, 2 2015 @ 02:08 PM
link
a reply to: TrueAmerican
I am thinking that on the time table, and as far as things go. Its about time for earth to let out a little steam, it would be a sight to see that's for sure. Though I doubt it would come completely without warnings, but I am also quite sure that the warnings that do appear will be quite misunderstood and overlooked.

May as well watch the fireworks when it happens, and happen it will...Eventually. But whats a human lifetime as far as such things are concerned. Not much at all.

This is America,we're out of virgins sorry.
second line


We have plenty of virgins in America, they are just normally confused with moo cows lol. Sorry I just had to say it. Back in the day they would have checked your mental health if you did not have a husband by 18 so I would question today's evil environment over anything being bad many years ago when a girls hormones go into their NATURAL cycle.

90 percent of today's passing Grandparents would have all been jailed under today's bone head laws, but then again the men actually worked and supported their kids back then instead of sitting on their asses playing video games.

Yellowstone will only blow when God has had it with America and most of the world so go and enjoy the beauty of it. If you see all the Animals hauling butt away from it then turn your car around, just be sure to stream us video of it because running wont do you any good.


originally posted by: Answer
We should just drill into it from the other side of the earth and drain some magma out of the bottom... like a gigantic drain plug.

And they are still going to do it lol. They are going to cause a disaster themselves. How any government allows that is beyond me but I guess we will all get to see stupid incarnate live from everyone in the city nearby.

posted on May, 2 2015 @ 06:39 PM
link
You're right about the massive size thing now that I look at some illustrations. I knew they were big but yea, didn't remember til now even a small one has action going on hundreds of miles underground sometimes. Good reminder for me to enjoy science threads with the same amount of participation I'd put into being in an OR during brain surgery which is none...just looking lol I do still wonder though if we have any control over volcanic or seismic activity even just radical ideas and theories...that's probably the creepiest thing about an apocalyptic event in the volcanic category...we have medicine to TRY and combat a super bug, I've heard several documentaries saying if enough warning, we may be able to scramble together a nuke launch toward an incoming asteroid even though it'd be one shot win or lose, and most other scenarios give at least a shred of hope which when facing an extinction sized event is everything but one of the more likely possibilities, volcanoes, gives us no means of intervention, just sit back and cross the fingers.

posted on May, 2 2015 @ 07:39 PM
link
That's not very comforting. I've always been under the assumption that any large-scale eruption would be preceded by a lot of indicators. Uplift, gassing, smaller eruptions, particularly around the edges of the caldera.
As I was driving out of there this morning, it seemed like the hydrothermal features were more intense than earlier in the week, could have just been the cold morning.
So - Would goofing-off in front of the webcam be comparable to whistling past a graveyard? Guilty! 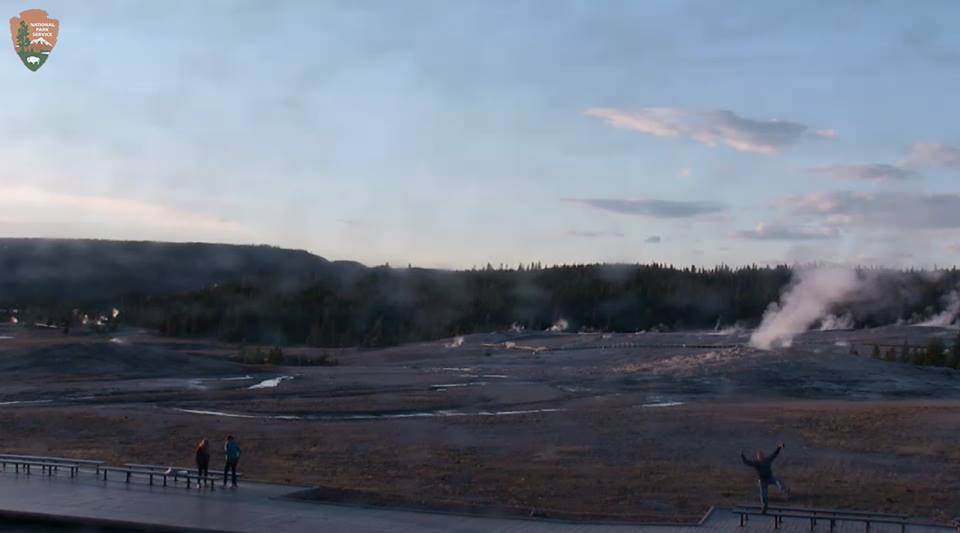 Just as long as your not trying to ride the Buffalo or Bears lol. That pic is great. If I did that it would definitely erupt right behind me.

Haha thanks PR, that sounds like my luck too!

I know one thing, walking around Norris Geyser basin is one of the most surreal landscapes I've ever been on. Felt like an ant walking around on top of a boiling tea-kettle.
edit on 2-5-2015 by sageturkey because: (no reason given)

Sage, since you have been there, I am wondering, and I can't find info on this, when the Yellowstone webcam, bounces up and down and the seizmos show activity, can you feel it when you are in the park? I know sometimes it is just wind, but are there times when the activity underground causes it? And, as for the camera operator, I am wondering a few things:

1. Is the webcam remotely operated?
2. When he/she zooms in on an area, is there a reason for this or just to entertain the public?

posted on May, 2 2015 @ 08:09 PM
link
a reply to: whatnext21
I've never personally felt any shaking when I've been there, pretty sure that it's almost always wind.
As for the camera, it is remotely operated. It sits in a window in the Old Faithful Visitors Center.
Usually when they move around and zoom in, they're focusing on either the main attraction itself or other geysers in the background that are going active. Many times though, they're just panning around giving viewers a look around the place.

ETA: Now wait a minute, I never really thought about this and I just contradicted myself big time! I've always assumed that it was just wind, but (and I just figured out the location last week) the camera is inside!

So does this mean that the building is shaking if it is inside?

Ya know, I'm gonna have to go against what many others have said and go with yes. I can't think of what else it could be.
You can actually see the camera in this picture. It's in the second row of windows from the top, in the triangular window on the left. The little round thing mounted on the beam... I know that for sure, I made a special effort to locate it. 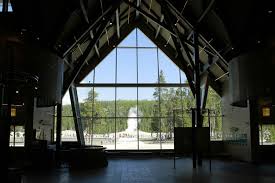 Unless... It's the wind causing the building and window frame to move. I know that when the geyser is going off, it puts out an awful lot of water and it causes the ground to rumble when it's shooting out and comes raining back down. You can definitely feel that, but as far as seismic? Don't know for sure.

So just HOW rapidly? As in minutes, hours, or days? Well I don't know. Don't have access to the full scientific paper.

Here is the article. It provides no timeline. It doesn't seem to imply an enormous caldera forming eruption anytime soon but you can probably do a better job of interpreting that.
www.geosociety.org...

An eruption could have no seismic warnings at all.


The relatively low viscosity of these hot, low-crystallinity magmas and their transit along faults could result in rapid, possibly aseismic (Castro and Dingwell, 2009), ascent with little to no pre-eruptive shallow storage, making forecasting of potential future Central Plateau–type eruptions difficult.

No idea what to look for.


Eruptions could include large rhyolitic lava flows and/or pyroclastic eruptions, with generally unknown precursory signs and emplacement mechanisms, as well as phreatomagmatic eruptions due to the abundance of ground- and surface water at Yellowstone.

Because it may come down to sheer minutes if that monster decides it's been sleeping long enough.

Minutes in which to do what? Exactly?