If he came out from the woods it would be easy to mistake him.


granted, I was detained as a Woookie trying to enter immigration after a Safari vacation. Leg hair and matted hair made me look like Chewie. 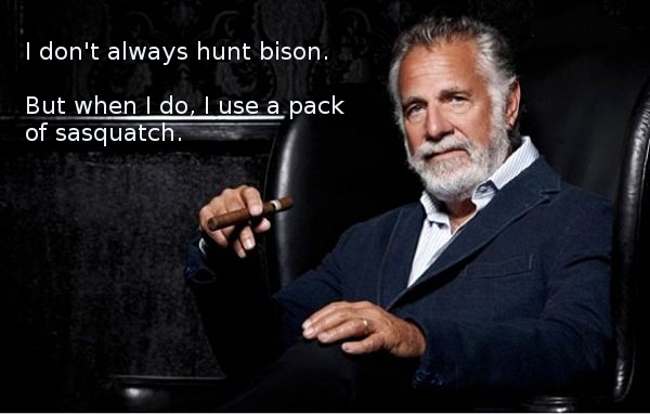 originally posted by: unphased
I'm sorry, but the thing in the video walks like the oldest possible depiction of C-3PO..

Looks CGI to me.. and I'm usually on board for bigfoot..

Can you please point out a couple of examples on this video as to why you think its CGI?

posted on Feb, 3 2015 @ 01:57 PM
link
If these are really bigfoots I find it very strange that they walk in single file and the smaller, injured one leads the hunt while the largest is last in line.

posted on Feb, 3 2015 @ 02:01 PM
link
Maybe a bunch of extraterrestrials who are interested in that super volcano. You see UFO's Vulcano diving all the time these days..

SkepticOverlord
+5 more
posted on Feb, 3 2015 @ 02:12 PM
link
I obtained the original video, scaled it 200%, cropped down to the area where the figures are seen, and then made an animated GIF for better analysis by ATS members.

originally posted by: riffraff
If these are really bigfoots I find it very strange that they walk in single file and the smaller, injured one leads the hunt while the largest is last in line.

I watched a David Attenborough nature programme about polar bears. The male when seeking a fertile female walked exactly in her paw tracks to track her down to save energy.

But that doesnt explain as you say the smaller leading the hunt.

Bison can stand, at the shoulders, 6 to 6 1/2 feet tall. That's not including the hump. Who or whatever this thing is that ThinkerThunker is using to compare the size with is the smallest one. That would make this biped at least 6 to 7 feet tall while the largest could be upwards of 7 to 8 foot or even larger.

Even if the Bison is 5 foot to the shoulders the larger biped is still massive in size. Human or not he's a big mofo.

Not saying it's not possible but that makes for some extremely large tourists.

The last few frames (arm motions) make it look like the lead figure is laying out some kind of line on the ground.

The figure in front is very dark. The movement is awkward by human standards. Consider how black bears can look like black

undefined shapes in the distance, especially against snow.

One poster pointed out how they're walking in tempo. Military? Amateur group? People studying the bison? So many possibilities.

Thinking of Sasquatch, they're said to be nimble, perfect stalkers, pacers. Able to sneak and get away without much sound (in

I guess they've perfected hunting in groups and sneaking around animals..

The youtube analysis assumes a lot, especially comparing the height of the group in single file with the lone individual.

A lot of distance was covered between the first time we saw them and when they appeared on the right edge of the video. Walking in

snow can be difficult, if they're truly large and heavy, sinking would be a problem. Could a human cover that much ground in that

I'm a Sasquatch believer, so my views on these two videos biased, I won't deny it. If they're not Sasquatch, the camera captured

humans. Perspective is the key.

The internet is loaded with stories about them being around deer that show no reaction to them. And there are many stories of

animals that are terrified of them, as well as dead deer left in groups.

Can't say for sure, but it seems like these are bigfoot. I do like how the camera moves to the geyser as soon as the scene starts

Not sure if this truly affects this particular channel's credibility, but the donation pitch at the end was a little tacky imo.

Then again, people have to get by. And many feel if you like something, toss a little to them...

In closing, Sasquatch are in tune with nature, they observe, study to learn and to get a sense of the environment. Maybe this was a

family playing, training younger members. Could've been a group of males hunting. And it's awfully interesting that the camera

panned to the geyser at the height of the action. Fits into the coverup theme.

And...is there a way to verify when this feed was recorded? Anyone else witness it?

ETA: The first one that walks out from behind the trees seems like it's quickening up its pace. Jogging just a bit to get further ahead....

edit on 3-2-2015 by Yeahkeepwatchingme because: (no reason given)

The last few frames (arm motions) make it look like the lead figure is laying out some kind of line on the ground.

originally posted by: Zarniwoop
The last few frames (arm motions) make it look like the lead figure is laying out some kind of line on the ground.


Or a cross-country skier using his poles with short slides of the skies.

posted on Feb, 3 2015 @ 02:29 PM
link
I believe this is a misinterpretation. I think it's four people walking. Their walking gate is human. Not a creature.

Or a cross-country skier using his poles with short slides of the skies.

Which would also explain the single file.

posted on Feb, 3 2015 @ 02:30 PM
link
a reply to: Zarniwoop
Or hiking sticks. The little side hops for a few steps where the knees don't bend much, snow shoes or skis maybe?

posted on Feb, 3 2015 @ 02:31 PM
link
Yeah, the way the knees kick up. It's gotta be either snow shoes or cross-country skies that have one of those "Alpini" bindings that can be released at the heel.

Who the hell would equip a team of sasquatch like that?

posted on Feb, 3 2015 @ 02:35 PM
link
If ski's would explain how they cover so much distance earlier so quickly too, considering the decline.

His buddies seem to be walking pretty effortlessly behind.