page: 1
122
<<   2  3  4 >>
log in
join
share:
Paperjacket
+95 more
posted on Jan, 13 2015 @ 08:29 PM
link
There are many theories trying to explain the Nazca lines. Among them，I would very much like to mention Maria Reiche’s work. She claimed that animal shapes are symbols of constellations, such as the monkey shape is similar to the Ursa Major, the spider shape is similar to the Orion, and the lines represent their directions. Now I will present a new one partly related to Reiche’s work, which is more interesting and astonishing. 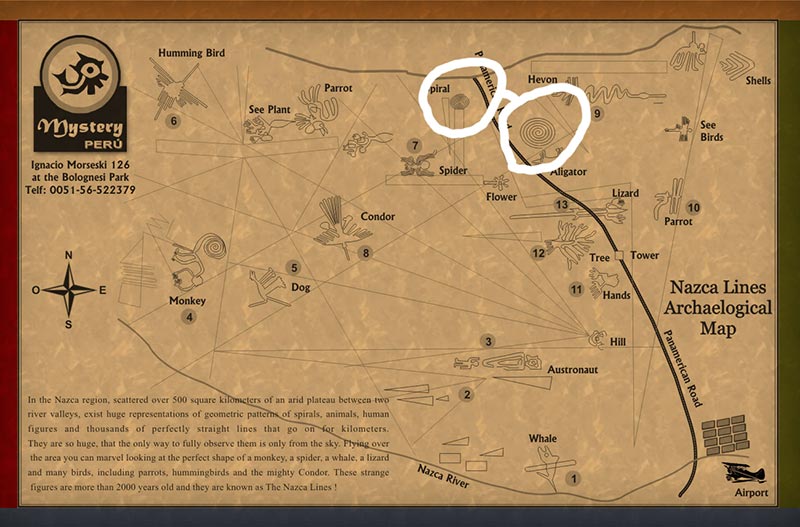 Recently a rather simplified map of Nazca Lines (as shown above) drew my attention. Pay attention to the two spiral shapes on the right corner of the map, one is big and the other one is small. As we know, only people living in the southern hemisphere can see the two Magellanic Clouds with their eyes. Therefore if those two spiral shapes were drawn to represent the LMC and the SMC, was it possible the whole place a picture of the universe? As we will see, This assumption will generate many interesting results.

1. Most of the animal shapes could be symbols of constellations. Especially the dog shape is extremely similar to the stars around the Centaurus. The condor shape is similar to the Aquila, the far end of Humming bird shape not only looks quite similar to the Cygnus but locates in similar position. 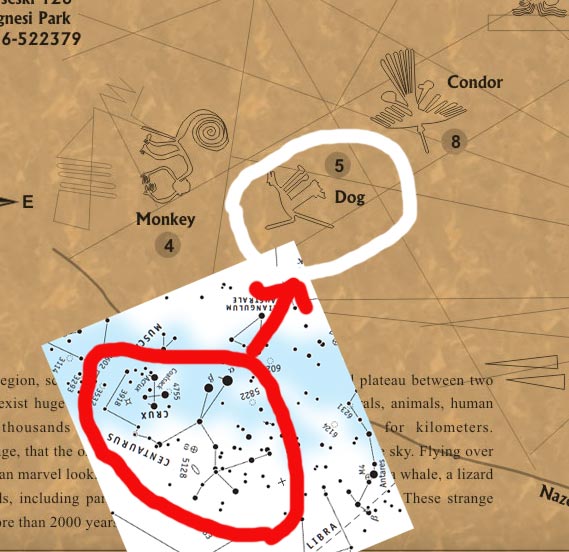 2. The so-called astronaut figure could indicate the viewing point from which we should observe this huge picture. Together with hands and tree shape on the right and .whale shape on the left, these symbols in fact represent the earth, which is also in consistent with real geographical position of Nazca. 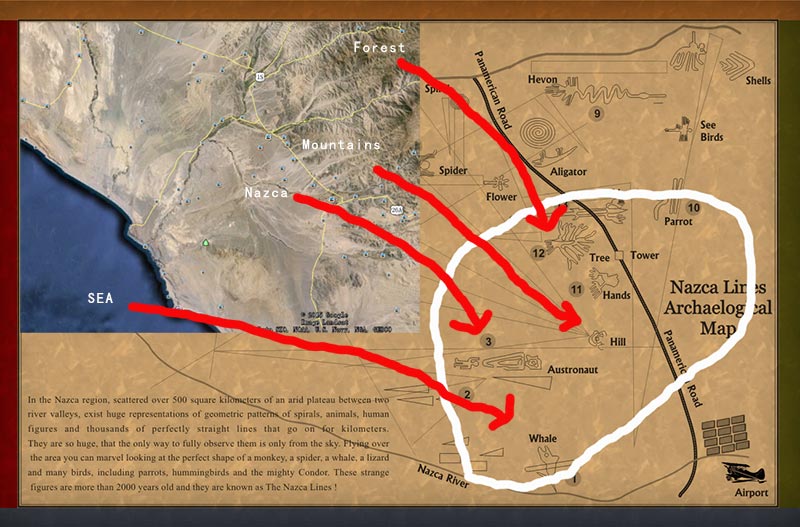 2. The huge belt from south-west to north-east could represent the Milky Way and we will immediately find out that this may represent a 3-D space map. 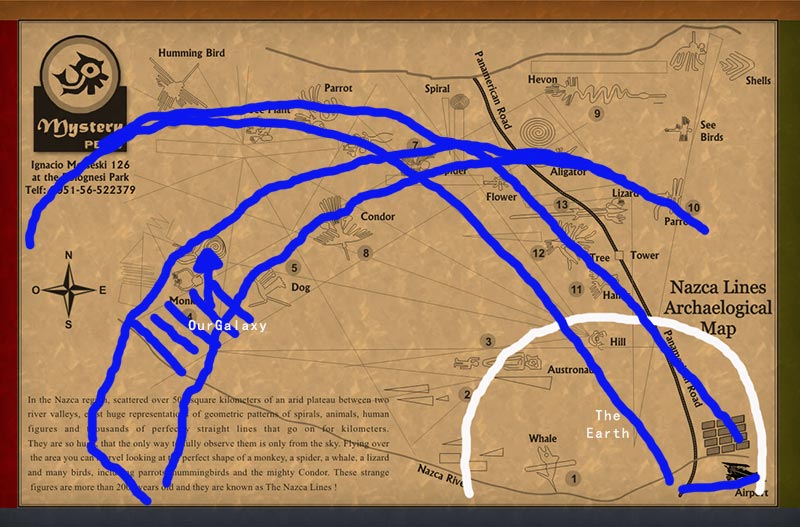 5. Then there comes the key point: the Nazca lines could represent inter-space travelling routes. AS we can see, there are many routes to the hill-top, in my theory, the earth, which means different extraterrestrials may have been visiting the earth. By this map, We also will get to know who are visiting the earth. 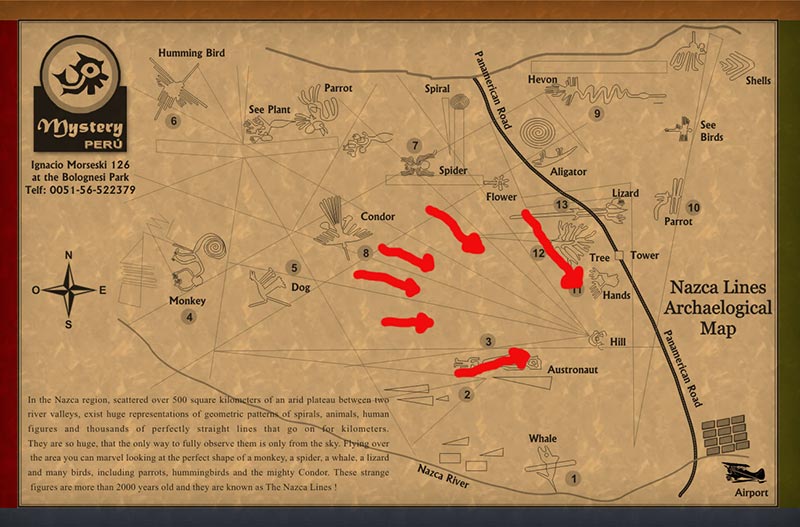 6. In more detailed maps, you will see there are some runway alike shapes from which many lines entend outward (spokes). All runway alike shapes with spokes, in my theory, the routes, could be inter-space travelling hubs or terminals where higher level extraterrestrials live. 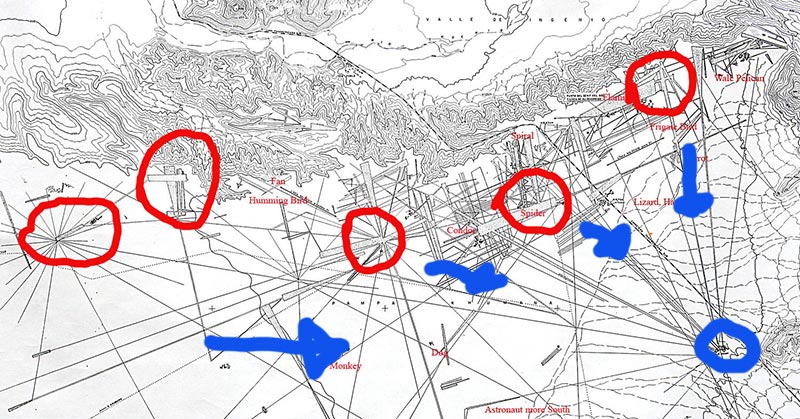 7. Among all hubs/terminals, I am particularly interested in the one near the spider shape which is similar to the Orion and the one locates further northern than the Cygnus. The former one may involve too many tales. The latter one is still UNKNOWN and I doubt that it was this hub that have direct relationship with the Nazca lines. 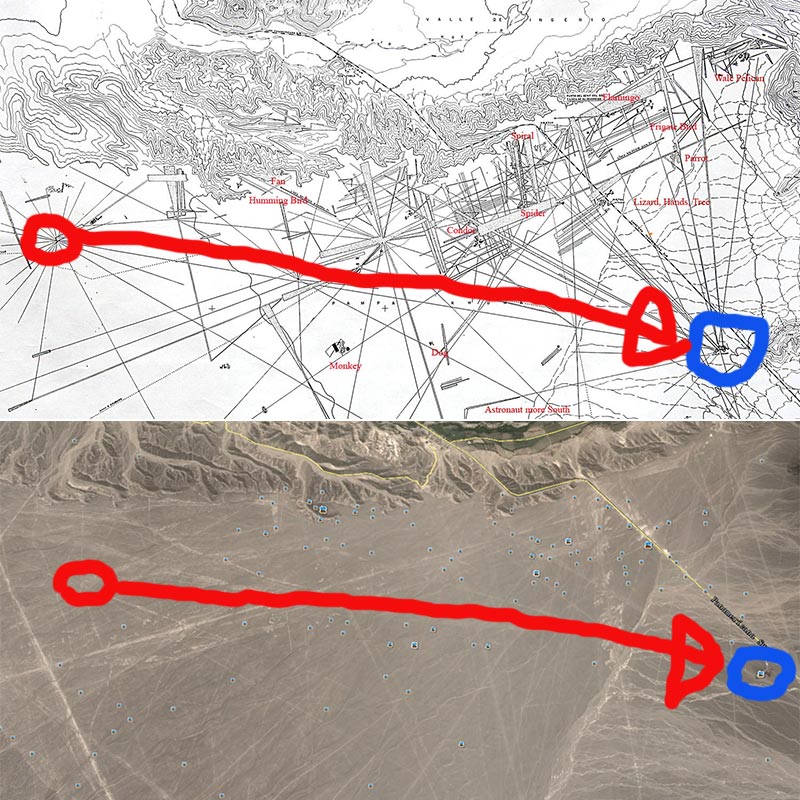 Suddenly, the Nazca lines, in my eyes, turn to be a map of inter-space travel with typical hub-spoke traffic structure. Those who designed the Nazca lines wanted the future human-being to understand that we are not alone and left a map for guidance in a way we could understand.
edit on 13-1-2015 by Paperjacket because: (no reason given)

I read the whole OP.

As we know, only people living in the southern hemisphere can see the two Magellanic Clouds with their eyes. Therefore if those two spiral shapes were drawn to represent the LMC and the SMC, was it possible the whole place a picture of the universe? As we will see, This assumption will generate many interesting results.

If it's a map of the universe, it should include constellations visible from the Northern hemisphere that couldn't be seen from Peru. If it did include things you couldn't see from Peru, well, then you would have a mystery.

THX I just cant wait to share my thoughts and posted it just I scored 20 posts.

posted on Jan, 13 2015 @ 08:52 PM
link
Very interesting thread. I don't have anything to personally contribute, but I'm looking forward to seeing what other members have to say.
If you are in fact a new member, you deserve some congratulations. This is cool stuff.
edit on 1/13/2015 by trollz because: (no reason given)

But Peru locates in the Southern hemisphere so all constellations on the map are consistent with those who should appear.

Yes I am brand new and THX for reading. I am looking forward to members' feedbacks.

posted on Jan, 13 2015 @ 09:15 PM
link
The Nazca lines in my opinion are obviously attempts to communicate with not spirits or gods but, put simply. Aircraft.

The care and calculation that were in play in the building of these lines speaks volumes.

This was them saying "hello, we are intelligent and we want to communicate with you" stories of contact with these beings obviously not only pre-date these lines but were the reason for their creation.

posted on Jan, 13 2015 @ 09:33 PM
link
This is an intriguing take on the Nazca Lines. I appreciate your effort in posting this thought-provoking idea!

With the proper map coordinates, a general time frame and a star-map app you can check to see what they might have been looking at specifically in their sky. (An app like the one I have on my iPhone allows you to travel back in time and look at the sky from whatever location you like...too bad it doesn't let you Actually time travel, but...I'm sure someone is working on an app for that...lol!)

I don't have time to go digging for that information right now, unfortunately. If someone else posts it, however, I can look it up on my app and post a screen-shot, or, if you are able, you could do this yourself...

Again, your thread is very appreciated!

posted on Jan, 13 2015 @ 11:14 PM
link
I think it may be interesting for you to check out the work of Carl Munck on you tube....disc1,2,and3 worth may fascinate you.....his explanation has some math to tie it together too.....tie it to Giza,Stonehenge, and other megalithic structures....such as Nan Madol, easter island etc.....

I've been to Nazca and the locals think the Nazca shamans used hallucinogenic drugs from the Amazon and they were able to have an out of body experience and their mind was way up in the sky able to look down at the lines. This is a theory how the lines were created to be seen from the sky and drawn so perfectly. I believe you can research what the actual Amazon drug/medicine they used.

Also the infamous Astronaut Man is known to the locals as an Extra Terrestrial. You may find some people online who claim the Owl Man, but this is not the case in Nazca. Go there and you will see.

posted on Jan, 14 2015 @ 12:51 AM
link
Sorry, but I'm just not seeing it. All I see are arbitrary and random lines squiggled over an already poorly drawn map. Plus, I hold some serious doubt's that Nazca is supposed to be representative of any 'interstellar travel routes' when there isn't a single piece of evidence of the existence of such routes, or extraterrestrials themselves.

And really, don't you think that these natives who somehow had all this knowledge to create these 'interstellar maps' would've come up with some better way of relaying the information, than by drawing cometely unrelated pictures in the dirt, and expecting us to make the (absurd) connection?

THX! especially your advice of such interesting APP. I downloaded and installed a similar software and it is really amazing. I will try to check the ancient sky map. Because the dog shape is quite similar to the shape I have showed which is part of a sky map cropped from a July sky map from www.skymaps.com and according to those who found the sun dropped along with one of the longest lines on June 22. I guess the map decribes the star map on the day of June 22 some year in very ancient time.

It sounds interesting and I will check it later. Thx for suggestion.

Thx and I guess those tales may derive from some phenomenon ancient ppl could not explain and then they had to invent a way to explain it in an earth way.

And I don't know who drew those amazing pictures but I'd rather believe it was not the locals who have DESIGNed the map. Maybe it was drawn by ancient Indians but under guidance of extraterrestrials.

Speaking of the astronaut figure, it looks to me that he is waving his right hand which means he is saying HELLO !


That sounds wonderful, but what do you base it on? You agree that we have no tangible evidence of such things, which by the way, big kudos for that, as many around here refuse to admit even that. But without any evidence that what you propose might have ever happened, why do you believe it to be true? At what point does it become like a religion? I'm not trying to argue with you or say you're wrong, but I'm curious what it is that makes a scenario involving extraterrestrial beings teaching our ancestors to crudely draw an interplanetary 'map' in the dirt preferable to the more mundane, generally accepted theories?

It makes for an incredible story, and I would be absolutely giddy if it were true, but in the face of a complete and total lack of evidence, I simply can't believe such things.

Well basically there are two types of theories. one type is that can be proved by generally acknowledged truth or rigorous mathematical methods; the other type is based on reasonable reasoning in a logic way even though it can't be proved by either way used by the previous one. Of course religion belongs to none of them.

Why I come to such a result is based on, as I have mentioned:

1. It is not a drawing on a piece of paper but a huge PROJECT even in today's standard and people would not RANDOMLY conduct a project without any purpose so all lines as well as shapes must have their meanings.

3. The rest of the shapes look like the place of Nazca.

4. There should be a reason explaining why shapes are linked by lines and I use routes to interpret those lines.

Since this is just a hypothesis and I am not asking you to believe it and in fact I am quite open and welcome different thoughts.

posted on Jan, 14 2015 @ 06:11 AM
link
I had to applaud this thread for original thinking.
Excellent first post indeed!
This is the kind of thread that makes ATS such an awesome place.
Thanks OP!