Can I give more than a flag?

posted on Jul, 30 2014 @ 11:27 AM
link
I've been a member for two years now and have lurked for many more years, and sometimes I will read a thread that goes above and beyond anything that anyone else has posted, and IMO sometimes a star and flag doesn't do the thread justice.

Is there any way that these contributors can be further rewarded for their outstanding achievements? and could ATS have an annual ceremony that acknowledges these members?

And when I mean rewards, I don't mean toasters or gift cards-I mean some kind of notification that appears on a members avatar that lets the rest of us know that they have made a significant contribution-like a trophy or a banner. Sometimes I get frustrated when I can only give one flag when a thread deserves much more, and maybe the mods could deliberate once or twice every year and vote for their favorite entrants, and that itself could provoke other members (like myself for instance) to provide better threads and increase the quality of their content.

Could it work? can we have an annual ATS awards?

Annual ATS Awards
That's a neat idea.
I like your ideas, but I don't know if they could be done in reality , or how hard it would be to add it to members' avatars.

When I find a gem on ATS, I flag it star it, tell the OP what a great thread they made, and sometimes even write a U2U. 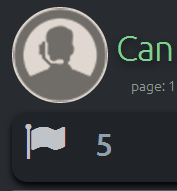 This thread has 5 flags so far.
When someone likes a thread you made they can click on the flag icon to "flag it", and also "star" your posts.
The original poster (OP) is talking about having more ways to award great threads and its members.

originally posted by: Thecakeisalie
Could it work? can we have an annual ATS awards?

At one point in time there was the WATS award (Way Above Top Secret) that was given to a member that continuously posted outstanding threads, and posts. It was voted on by other members, but IIRC it pretty much became a popularity contest.

I can't accept an award but I can and will accept a check.

posted on Jul, 30 2014 @ 01:39 PM
link
mods do give out applause for good threads
i have had a few myself somehow
so i think thats recognition at it best
and i see you have had 5 yourself

originally posted by: maryhinge
mods do give out applause for good threads
i have had a few myself somehow


My sentiments exactly. There were some posts that got an applause for me that left me scratching my head. "They liked THAT?"

originally posted by: Aleister
You can give a geese.

Geese?
As in old McDonald had some geese?

Are you trying to turn us into farmers?

I think I'll stick to the stars and flags ,no geese please.

posted on Jul, 30 2014 @ 02:26 PM
link
You could, but in some States/Countries it's illegal.
At the risk of criminal record and probably some serious public humility, a good post is simply not worth anything other than a "Thumbs Up" on da Interwebs.

originally posted by: Zaphod58
...pretty much became a popularity contest.

I think it actually discourages others from posting good content.


ill see if i can find them for you lol
a reply to: Taupin Desciple