I feel sorry for you, God bless.

I saw this yesterday, I won't direct any of my feelings about this towards the kid, but this is just as disgusting as parents that implant all of their own twisted views and ideas into their children, creating little parrots of their own thinking, thus perpetuating fictions to everyone else, I am sure that anyone can do enough research and find all of these theories of crystals, energy and rocks in books the world over from libraries to a thrift store, it still won't matter, if it goes up into the atmosphere and explodes, the energy is still there, just transformed into another form of energy, did he manage to figure that one out yet ?
If anything I can see an acting career in his near future in a Hollywood blockbuster.
edit on 31-5-2014 by phinubian because: spelling

THIS is the reason why children can see much more than adults and learn to forget it...
because of ignorant parents ...

one of them had a psychotic shock afterwards. He meditated on rocks and suddenly was in "a world with different beings" and a structure that blew his mind literally..

The others are kind shamans and they use stones to heal and to restructure. They say that stones have an intelligence..


There are many more who know that what the little guy explains here is real...

Do you really think we live in a world where the people "who say that something does not exist" are the ones who can dictate what is real and what is not real? Just because they label those people "insane" or "fake"..???

The reason why this is not known is because it is ridiculed and because science can not measure it (yet)...


Why do people seemingly never stop with their witch-hunt.

Do you think that 200 years ago people would have believed that "wi-fi" is possible?

They would have said: "You crazy people with your imagination"...

and its the same with the energies this little kid talks about. They exist...


btw there is a talk from bashar from this year "the stone speakers" where he explains how to communicate with stones...and how "they learned" it..


And for those who don´t know what indigo children are and what they can..
A book from a young indigo child..... blew my mind

posted on May, 31 2014 @ 11:11 AM
link
The kid, someday, will probably grow to be a designer of networks, or work with crystals somehow.
I didn't really believe you could drain 2% of your battery from your cellphone with a crystal until i just read this:

I was charmed by the kid, but at the same time we all know how impressionable a child can be, and prone to adopting the words of others as truth all too easily. However, it would be very interesting if we could corroborate the child's claims with some evidence of the geometric positioning of crystals/rocks/geodes. After all, a triangle is the most powerful of them all- and in nature the spider instinctually has spun her web not for beauty, but for effectiveness.

This definitely reminds me of orgonite.

posted on May, 31 2014 @ 11:31 AM
link
I think that "crystals" have an enormous amount of unexplored potential. But, I think its pretty obvious that this child was driven in this direction by the nurture side of things just as much (if not more) than the nature side.

Its a shame that people who subscribe to these things are so fervently against science. If they were to practice it, and even come up with new measurement technologies, we might see some kind of breakthrough understanding on how to truly use these natural formations for a variety of things.

The technological industry is more focused on profit-making tech, as it is a business. But, if we were to use the same approach for the "spiritual" side of things, they might finally link at some point up the timeline. As it stands, both are just two sides of the same coin.

posted on May, 31 2014 @ 11:33 AM
link
Oh I thought something was gonna happen like lightning and stuff pfft.
So he put a load of crystals on a board...well done no child could have done that.

Obviously he grew up in a household who already had a set of beliefs residing under it's roof. He grew up into that, sure, but what of it? This isn't something anyone can escape in ANY household regardless of beliefs. You use what you grew up into.
I grew up in a Christian household. I didn't realize it until recently, but I've been "looking for God" literally my entire life. Should I be judged for, when at his age, I entered into some sort of unexplained spiritual high from some random Christian music? No. I shouldn't. And neither should he.
Could it have been imagination? Who knows. Still...no reason to knock it. Imagination is a thing. A valid thing.

this is how society works. If he would have talked about god (in the christian sense) ..People would have not find that so strange....and would not talk about his parents as long as they believe in god....

posted on May, 31 2014 @ 11:41 AM
link
I think it is interesting that crystal grids are usually always in a pattern. Most of the time circular in origin (similar to the flower of life). They usually are a complex geometric design, a compilation of rocks placed in a pattern. A pattern designed for the energy to flow freely.

I had to go reading on crystal grids after this thread and I saw a lot of very interesting grids. What it also reminded me of was dream catchers with crystals in them. They are very similar.

Here are some interesting pictures. 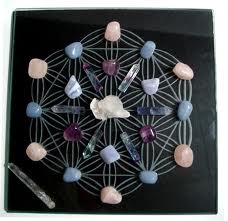 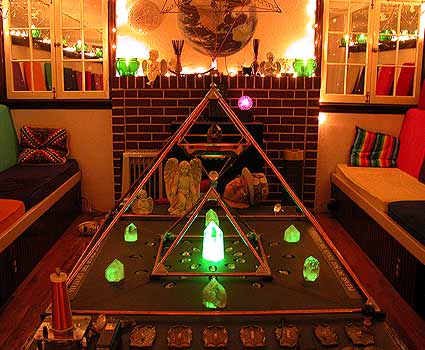 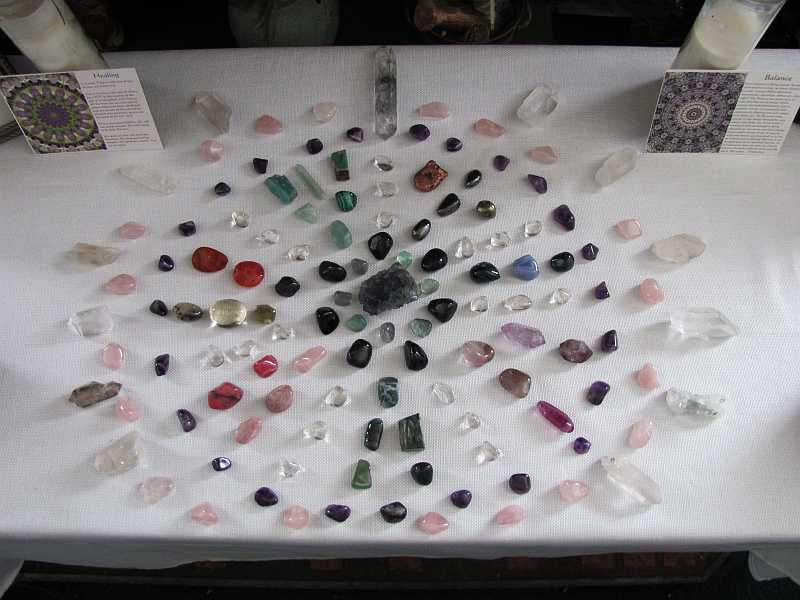 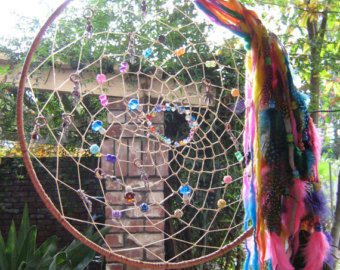 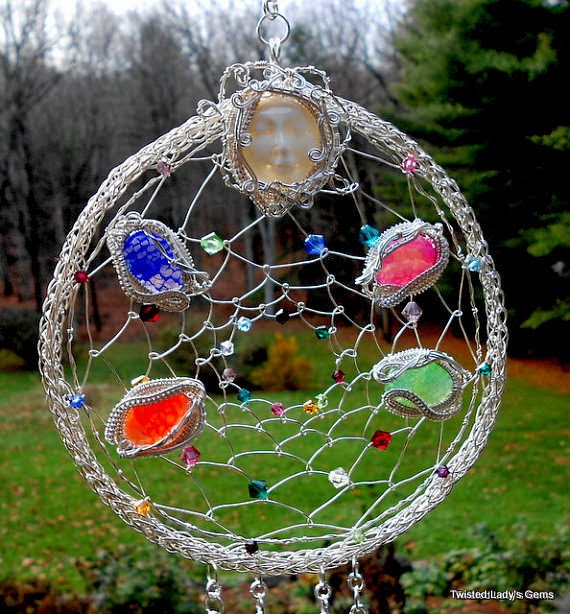 I am now inspired to make my own crystal grids and dream catchers.

Maybe I will make one for each of my family members and do my own experiment to see if they have any noticeable changes occur afterward ? I think it would be a fun and rewarding project.

They do look very pretty.

The family members who believe it will benefit them will feel it is positive, those that are doubtful are unlikely to experience anything at all. C'est la vie.

A grid resulting in patterns shouldnt be too big of a surprise..

As for making some of your own, go for it!

It is very interesting what he says in the beginning with regards to water/ flowing and storms.

originally posted by: Realtruth
Upon reading the replies many people appear to have been indoctrinated into believing only what they have been taught, or exposed too.

It's sad that because we see a child, or something we don't understand, nor can quantify in our limited ignorance we judge harshly, or with ignorant statements.

This particular type of behavior, or blind ignorance is exactly why many people on this planet may never come into full understanding of their own potentials, and why there is constant war, chaos, and conflict.


Is this kid not just doing the same thing? Mimicking the teachings of the environment he was raised in? What if he was from a christian household and said the bible spoke to him and he showed us how to use it to disperse negative energies? Would you chastise those who call bs on that?
edit on 31-5-2014 by begoodbees because: (no reason given)

originally posted by: kauskau
i know 3 people who know that you can communicate with rocks.

I think the experiences I've related here constitute communication of a sort.

posted on May, 31 2014 @ 01:45 PM
link
Wow, this thread kind of blew up, pardon my participatory absence folks. It seems there are two lines of thought going on, one sees this as bs or ignorance and the other is of possibility and positivity. I put this in the metaphysics forum because I feel that is where it belongs. I realize it qualifies as new age-ish utilizing energy concepts, and I have reservations about that kind of stuff, but at the same time I am open to such possibilities,in a speculative optimist fashion, because I feel we have power to shape our realities as they manifest sometimes,. I guess faith or hope has it's place here and if people use crystals as a source of happiness, then that is the bottom line for me. Sure it could be considered pseudoscience and I respect people's defining this as so, I just thought the novelty was more interesting/inspiring than scientific.

I am one, like RealTruth that wonders about innate intuitiveness amongst children and what, if any value is lost to society from children's minds that conform to status quo as they grow. I can see how some view this as harmful, but I do not see it as so because I believe imagination is one of our greatest attributes and should be encouraged. Sometimes wisdom of the ages comes to light under scientific investigation, so I am still open to crystal power and hope maybe quantum physics or another field may revel any importance beyond belief about crystals. A part of me thinks that beleif itself is the power. That is highly speculative yes, but still I wonder. I would like to see some kirlian photo shots of the grid just out of curiosity.

Thanks for all the comments and may this kid find his own place in his beliefs and practices, one way or another.

ETA: Just wanted to add that new age stuff could be compared to religion, as in it has value for some, providing hope and positivity and as long as they aren't pushing it in others face, let them be, for it takes all kinds to make our world go round.
edit on 31-5-2014 by speculativeoptimist because: (no reason given)

I can respect that. I also understand that not everything can be directly measured. However, what other than just believing in these stones can you offer me to better help me understand this?

You really can say that about anything in this world....you just need to have faith. Well I need something a bit more concrete.

Instead of calling people ignorant you could try and help them understand...like you said the older you get the less aware you become of certain things. Calling people names won't win anyone over.

What do these stones do? Not theoretically..

I think things like this are very real, but in the way we currently approach them we are not apt to learn as much as we could.

I believe there is much more to these things than meets the eye, but the approach is extremely limiting. The interactions between all of these objects could be measurable in a variety of unexplored ways, but its up to those with an interest in it to do so. However, in these realms of belief, its almost as if once the nature of these interactions is explored and quantified, people would all of a sudden feel its all less "special."

This is probably compounded by the behavior that once we know a bit about the pattern behind something and use it in our own creations, it starts to be considered mundane because it is commonplace. As long as there is an air of mystery, it can hold a stronger sense of appeal.

In this case, the child seems heavily coached. I hope his parents allow him to explore it in his own way rather than theirs. The only limit is our imagination, and a desire to truly learn even if it doesnt confirm our bias.