Phobos 2 operated nominally throughout its cruise and Mars orbital insertion phases on January 29, 1989, gathering data on the Sun, interplanetary medium, Mars, and Phobos. Shortly before the final phase of the mission, during which the spacecraft was to approach within 50 m of Phobos' surface and release two landers, one a mobile "hopper", the other a stationary platform, contact with Phobos 2 was lost. The mission ended when the spacecraft signal failed to be successfully reacquired on March 27, 1989. The cause of the failure was determined to be a malfunction of the on-board computer.

The Phobos design was used again for the long delayed Mars 96 mission which ended in failure when the launch vehicle's fourth stage misfired.

Actually, this is an extremely shortened report about the events, but let's say that it's passable.
Anyway, this is the photo i'm going to talk about:

The photo was first made public on the November 22, 1991 Larry King Live, when UFO research director Don Ecker appeared in the show with author Keith Thompson.
Estimates said that the UFO caught on camera was approx. 15 miles long.

Another article about the same photo:


Much controversy surrounds the last photo taken by Phobos 2. Seen above, the photo seems to show a long, slender object just below the moon Phobos. Estimates of the size of the object are up to several miles long. However, critics say the object could be nothing but a camera artifact, since many images from the same camera showed long, white streaks similar to this.

Yet, many claim that the image shows a UFO. This photograph was revealed in []December 1991 by Marina Popovich, a famous Soviet test pilot sometimes called the "Russian Chuck Yeager" due to the 17 aviation world records she holds. She claimed that the photograph was given to her by cosmonaut Alexei Leonov, who was the first man to walk in space and also a high official in the Soviet space program, and that she had "smuggled it out" of the former USSR. According to her, the photo clearly shows a UFO hovering near the moon Phobos, and is "the first ever leaked accounts of an alien mothership in the solar system". She says this was apparently the cause of the disappearance of the Phobos 2 probe.

and almost all the other UFOs based websites.

Both reports are characterized by some hight level of ignorance: there is NO WAY to even guess the size of some object caught on camera on some 3d environment and depicted on some 2d image: every guess would be arbitrary and based on everything but logical basis: this is what has happened with the image in question, only a triangulation could allow us to estabilish the size of the object.

But the point is that it was NOT an actual object.
Many years after, i finally got the chance to access the Complete Phobos 2 VSK Image Data Set : you can find it here.
www.planetary.org...

As you can see, the images are divided into channels:
Channel 1 (blue)
Channel 2 (clear, high-res)
Channel 3 (infrared)

A couple of problems with the Phobos 2 cigar shaped UFO.

And here's an animation composed by the frames posted above: each frame has been captioned by me with the original caption

Conclusion:
the cigar shaped object allegedly spotted by Phobos II was a DELIBERATE HOAX based on image 2550033 from Phobos 2 VSK Image Data Set

Thank you for your attention

posted on Oct, 16 2009 @ 04:07 AM
link
I'm more interested in the lighter streak under the moon, actually. Kinda makes it look like it's really trucking with a speed line behind it. I am sure it's a glitch of some sort.

Edit: I am REAL interested in images 9 and 10, too... If these are in sequence, why does the surface of Mars change so radically?

posted on Oct, 16 2009 @ 04:19 AM
link
I guess the question is, why the hoax?
This is why I repect and trust your work, you're more interested in the truth than the hype and propaganda.

Originally posted by gortex
Case solved , well done internos nice investigation ,Star and Flag .
Do you have any opinion on the Monolith on Phobos ?


Thank you. No, i have not an opinion on the monolith: 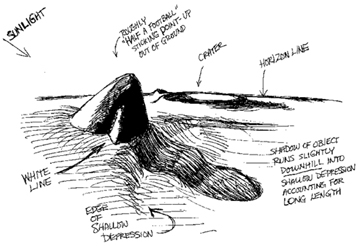 i mean, it could be some natural formation, of course it's eye-catching, but far away from being some anomaly worthy to be called artificial in its origion.

posted on Oct, 16 2009 @ 04:53 AM
link
well done
But i think the case is closed only here on ATS and maybe a few more places from now...
The legend with huge mother ship near Phobos will live like many other ..hoaxes or misinterpretations.


good job on this internos

that story has been circulating the internet for as long as i can remember. i am sure you made this thread for when the subject comes up again we can have this thread to go to.

i only have one question about this...

is there any way of knowing for sure they are the last pictures taken by the probe ?

Originally posted by projectvxn
I guess the question is, why the hoax?

This photograph was revealed in December 1991 by Marina Popovich, a famous Soviet test pilot sometimes called the "Russian Chuck Yeager" due to the 17 aviation world records she holds. She claimed that the photograph was given to her by cosmonaut Alexei Leonov, who was the first man to walk in space and also a high official in the Soviet space program, and that she had "smuggled it out" of the former USSR.


People with military or intelligence connections spreading lies about UFOs? Where have we seen that before?!

I think some of the disinformation about UFOs and aliens out there suspiciously seems like attempts to convey the idea that the US Government has a deep knowledge of these things, when in fact it probably doesn't.

So it's quite reasonable that when it comes to sensitive matters, as we've seen in the past, the disinformation game is played by more than one player.

posted on Oct, 16 2009 @ 09:06 AM
link
Great work I must say, clap clap. Is it me, or does the second picture of the Monolith kinda look like a nose sticking out of the surface with a goatee and a mustache?

Take a look at this "Martian Portrait" that i find very intriguing.
What is your opinion? One of the basic notions about illusionism... "while you're watching one hand, you miss what's happening on the other".

The same goes for Area51. I seriously doubt that anything serious still happens in there. The whole world has their eyes on that area. The argument "the best way to hide something is in plain sight" doesn't apply.

I think that while people keep guessing and dreaming about Area51, and S4 and so on, serious things happen in another locations, without anyone noticing it.

posted on Oct, 16 2009 @ 10:17 AM
link
At first I thought you were talking about the rock. I see your werent. But but still, it seems to me that death by rock is more plausible than computer failure. Is it just me though, it seems as if that big object was coming right at the camera. Maybe I'm jus confused

Since the key object is so pointedly fixed in the frame I was always inclined to think it was an artifact of the transmission or processing.

Nice to see such a dispassionate analysis.


Wow, now that's an interesting image! From where did you pick that one up?


I think the big rock you are referring to is the moon "Phobos". The even bigger rock seen in some photos is Mars. Phobos was the destination of the probe, so it looks like they are on a crash course...

I believe the OP is referring to the white line that appears at the bottom of the photos.

"The spacecraft Phobos 2 reached Mars orbit and began to approach the martian satellite Phobos in February 1989. In the middle of March, Phobos and the spacecraft were several hundred meters apart"

posted on Oct, 16 2009 @ 12:00 PM
link
HA! good catch. i was about to start fowarding these claims via email and keep it circulation LOL 15 mile spaceship would be INSANE! no doubt they would have to be our "Gods" if it were true.

posted on Oct, 16 2009 @ 12:26 PM
link
This is a very good example of detective work, I actually have to admit I am a bit disappointed in the result though