Hold the obituary. Experts now think Comet ISON -- or at least part of it -- survived its close encounter with the sun.

Karl Battams, a comet scientist for the Naval Research Laboratory, said it is believed some parts of ISON's nucleus survived perihelion.

"It now looks like some chunk of ISON's nucleus has indeed made it through the solar corona, and re-emerged," he said. "It's throwing off dust and (probably) gas, but we don't know how long it can sustain that."

However, he said, its fate is uncertain.

"Now it has emerged and started to brighten, we need to observe it for a few days to get a feel for its behavior," Battams said. 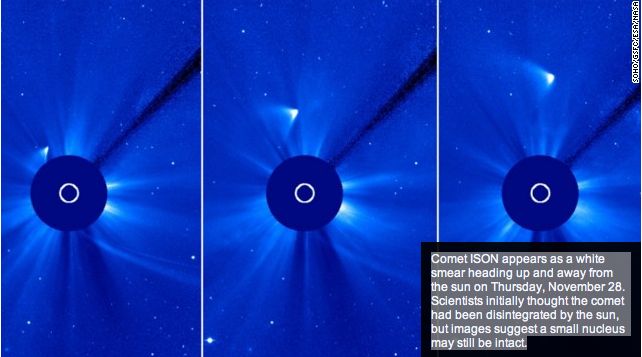 Comet ISON appears as a white smear heading up and away from the sun on Thursday, November 28. Scientists initially thought the comet had been disintegrated by the sun, but images suggest a small nucleus may still be intact.

The next few days will tell the story.

EDIT to add: Just saw this thread by bluloa, Ison Lives - It survived the Sun


It's alive! Cheesy I told you so buddy!
I heard and seen it with a bit of a spin to it.
Ison just wants to make fools of everyone.
It suprised us before and still is today.
3 hours in the heart of the sun then out again.


Who the hell is cheesie already? And why is his buddy trying to commit suicude _by sun?

with his tq sir/madam his tq is thank you

check him out there isnt a bad bone in his body


It seems to me that the field of Science has heavily attempted to downplay any aspect of the comet that may be suspected as not being what they tell it is supposed to be. 'Course, I'm biased as I've explained in my Rethinking Comets thread in the Skunk Works forum. The purpose of a coma is to intentionally shield the nucleus from the super strong effects of the sun, just as our transparent atmosphere shields us from the sun.
edit on 29-11-2013 by Aliensun because: (no reason given)

Comet ISON appears as a white smear heading up and away from the sun on Thursday, November 28. ...


to my untrained eye... the comets' 'tail' is not oriented properly ...IF it were indeed behind the solar disc the 'tail would always be going Away from the Sun... the pics here are not showing that physical characterictic...
the 'tail' appears to be diagonal to the Sun which only means it has not gone around the other side of the Sun at all


Hi ...I see you picture in your mind what we have been told that we rotate around the sun ..although we do a circle behind the sun it would seem for that to be true ...Let me explain as I now understand it ...The sun is in a arm of the milky way and is traveling through space at a certain speed ..we on earth are traveling in the same arm behind the sun in a spiral ....for us to literally go around the sun we would have to pass it and go around the other side and repeat for every rotation ...I think we are in what might be considered a fibonacci spiral behind the sun and the sun rotates just like the earth does ...now try and picture the same with the comet ....or try and take a picture with a different perspective ...peace

I still can't get my head around how a planet orbiting a star at approx. 30,000mph can ever get in front of star that is orbiting its galactic centre at approx. 600,000 mph. The idea that all our solar system's planets are orbiting the sun on a relatively flat plane, while following a sun that is moving at 600,000mph, makes the planet's having varying orbital speeds sound illogical.

Can some helpful astronomer-type tell me what's going on?


From the source article:


"From the beginning, ISON has confused, surprised and amazed us, and in hindsight its latest little escapade really should not shock us," Battams said. "Nonetheless, this has been one of the most extraordinary comets we have ever encountered, and just goes to reiterate how beautiful, dynamic and exciting our universe is."

..."What we see here is the dust tail emerging first, pointing away from the sun," said Padma Yanamandra-Fisher with the Space Science Institute and a member of the ISON Observing Campaign.

...The discovery stunned many in the comet-watching community and led some to nickname ISON the zombie comet.

Others repeated an old joke about comets and cats.

"Comets are like cats; they have tails, and they do precisely what they want," David H. Levy said.


I'm no expert, but I did watch the NASA livestream yesterday. They mentioned that there are technically two tails, which react differently to the sun. The dust tail which continues to stream behind the nucleus regardless, and the plasma tail which is influenced by solar winds.

Certainly ISON doesn't look like it has much of a tail left, but then they mentioned that the comet had stopped producing dust before its approach to the sun. Looking at the pic, I can see what appears to be two very small tails at a 45 degree angle (roughly) to each other.

From what I heard yesterday, this seems to support the idea of a small dust tail directly behind the comet and a slightly larger plasma tail behind blasted outwards by the intense solar winds.

I hope Phage or another expert can tell us exactly what we're seeing - but this is what my untrained eye sees.


He never replies when he is wrong...

IkNOwSTuff
Phage was fairly certain it was dead.


I see A LOT of people giving phage a hard time because he said the comet was dead... but for quite a while... every single source available said that ISON didn't make it.

I was searching like a crazy person for hours, even during the time the ATS comet following community was speculating that ISON was showing some signs of life, trying to find anything official that said it survived, and I found nothing that said so until very late last night on twitter (@sungrazercomets.. an account ran by astrophysicist Karl Battams).

Not quite true. A number of professional and amateur astronomers questioned the official analysis, and kept looking for evidence - which is how breakthroughs are made in every discipline. Conversely, blind unthinking unhesitant support of the status quo is what blocks access to truth.


I have seen some good displays how it is working ..Just like we think because the moon is always showing its same face that it doesn't rotate but it actually does ..It has to in order to show the same face ..it's all about getting the proper perspective in order to visualize it in our mind .I will see if I can track down that visualization to demonstrate .. Ok found one now keep in mind that the earth does not pass the sun but is in a sprial behind the sun www.youtube.com... hope that helps
edit on 29-11-2013 by the2ofusr1 because: (no reason given)
this one may be better to understand www.youtube.com...
edit on 29-11-2013 by the2ofusr1 because: (no reason given)

w8tn4it
It looks as big coming out of perihelion as itwas going in. Cheesie's buddy lives on!

Surely that's just the brightness of the photo ?????