I'm putting together a easy-to-read timeline of the various crimes, conspiracies, and cover-ups in America since the end of WWII. If you have an event that you think belongs on the timeline, let me know.

Edit: Nevermind, I just noticed that you posted a link to the full size one LOL. Sorry about that.
edit on 27-5-2013 by Xaphan because: (no reason given)


Sorry, tried to go back and edit it to make the link more apparent, but it was past the 4 hour window. In case anyone else missed it the first time:

Just my dos centavos from the peanut gallery:

Most Americans are historically illiterate. They might not get it. It might help to show a simultaneous timeline with the generic history running along side your events. The juxtaposition could prove very illuminating.


I hear that... as Allen Dulles reportedly said, "The American People don't read". For that reason I have included major historical events (WWII, Vietnam War, etc) along with the more obscure black ops and so forth.

With time enough data will be available on it to connect the dots just from the dates and events.

posted on May, 29 2013 @ 11:43 AM
link
Great thread but there is so much more you could add to that if you are looking for conspiracies. The Nazi's alone would fill up about 10 pages worth.

The conspiracy of Hitler creating a Fourth Reich by sending out children with all of the stolen money to one day take over the world would be a good starter.

Lying totalitarian despotic psychopathic institutions and their empty promises of prudence in wielding a centralized monopoly of force over mankind has not made this planet a better place to live, but rather it has squandered the blood and treasure of the human race. Say it ain't so!

Perhaps the "Nature of Things" wants us to live free from the arbitrary rule of others, and not under a construct that demands coercion, compulsion and control.

Call me crazy but it almost seems as if living in a mob held together by institutionalized gang violence might be intrinsically at odds with the way human beings come to live satisfying lives.
edit on 29-5-2013 by METACOMET because: (no reason given)

posted on May, 31 2013 @ 01:41 AM
link
Great idea : )
I've bookmarked it so I'll keep checking up regulary.
As someone else mentioned- it would be great to see the 'accepted' timeline along the side to use as a comparison. It'd be interesting to see what's being taught in primary schools in the US.

Any thoughts on making this a global affair? I would be keen to hear of any 'linked' conspiracy shenanigans which involved the US/ UK/ any other powers - nations or corporations, cults and the like...?


For the time being I'm mostly concerned with American history, but you may be interested to check out the "Secret Societies" section which includes a number of international bodies.

In other news, the 1960's section of the timeline is now complete: www.afterthedream.net...

posted on Jun, 19 2013 @ 01:28 PM
link
I'm curious about the numbers on children disappearing and when it started to become epidemic.


Very nice timeline you got going there operatorkos!

I went through your timeline and here is some feedback. Some positive, some critical. ( I also read one of your NSFW comics while I was at work, because I am a rebel, and I enjoyed it immensely.)

I like the cute icons that identify the categories.
I very much liked the MK-program entries. It is staggering to see it, year after year. Secret programs, CIA, DIA, NSA doing whatever the f*** they want, murdering foreign leaders, installing new ones, American doctors injecting helpless people with poisons and radiation, spraying SE Asia with hazardous chemicals... the people who did these things were diabolically evil.
And I very much liked that every year, you post who was who in Washington D.c.

Black background, white text, I know it looks cool, but is so hard on the eyes!.
And all your links are to wikipedia so that's white background, black text headache inducing.

There is hardly any Nixon in your timeline!!! Nixon was involved with Paperclip, he was Navy, he enjoyed a fast promotional track during WWII, he was funded by southern California industrial interests, he was a Commie buster before McCarthy was, and he was VP from 52-60. Please add some more Nixon!!


Thanks, I really appreciate the feedback. Glad you enjoyed the comic. Part of the idea behind it was to provide an entertaining fictional story that might get a general audience interested in some of the real topics discussed. Hopefully it can also be interesting to people who already know what's up!

re: all of the black ops and human experimentation, that stuff gets really depressing to compile. I've gotten pretty thick-skinned after years of researching this kind of stuff, but still... ugh. When I'm done I think I'm going to go back and add a new category, something along the lines of "Successful Acts of Resistance".

re: the bad, I know the color scheme is less than ideal. I'm pretty much locked into it on that site because I initially chose it to go along with the noir comic. I may eventually launch a new site solely dedicated to the timeline and choose some colors that are a little easier on the eyes for such a text-intensive display of info. I made the text large by default to try and offset that a little.

re: the ugly... Drop some science on me, friend! There will certainly be more Nixon by the time I'm done with the 70's, but I haven't read that much about his pre-Presidency shenanigans. I didn't actually realize he was directly involved with Paperclip. If you have any good sources, or any specific historical Nixon events you think I should add in, I'd welcome the input.


Cool. Here's a little Nixon science I think that Nixon is very underrated in conspiracy theories of the 20th century. He has been on the fast track to Navy promotions, he has been on the fast track to the White House, he was bloodied in 1960, he got his revenge in 1963, he had his comeback (like Elvis Presley) in 1968, he faked the moon landings and devised an escape plan, Watergate, which made him look like a bumbling burglar, Ford pardoned him for all his crimes in Viet Nam and in America. And that's why Nixon is so underrated. Nixon's Navy time period is the same as the Operation Paperclip immigrations of the Nazi scumbags who were brought into to this country in 1946-47. Nixon's Navy assignments allowed him to expedite papers and passports for Nazi's and to make financial arrangements for them. That was the role of Nixon in Paperclip.


Nixon, for the most part, played tight but aggressive and viewed poker as a metaphor, learning life lessons wherever he could. As he wrote in his memoir: 'I found playing poker instructive as well as entertaining and profitable, I learned that the people who have the cards are usually the ones who talk the least and softest; those who are bluffing tend to talk loudly and give themselves away.'


10 Mar. 1946 Nixon released from the Navy. Rank of Lt. Commander. (Compare to JFK, GHW Bush and Jimmy Carter were retired as only Navy Lieutenants.)

14 May 1948 Nixon commie hunt begins. "Manages passage of Mundt-Nixon bill, the first piece of legislation passed by the House Committee on Un-American Activities in ten years, providing for the annual registration of members of the Communist party"

posted on Aug, 8 2013 @ 08:00 PM
link
The 1970's section of the timeline is now complete. It includes some some truly bizarre events- an explosion of cult activity, government research into psychic phenomena, UFO abductions witnessed by groups of people, and of course a long list of horribly depressing CIA black ops. 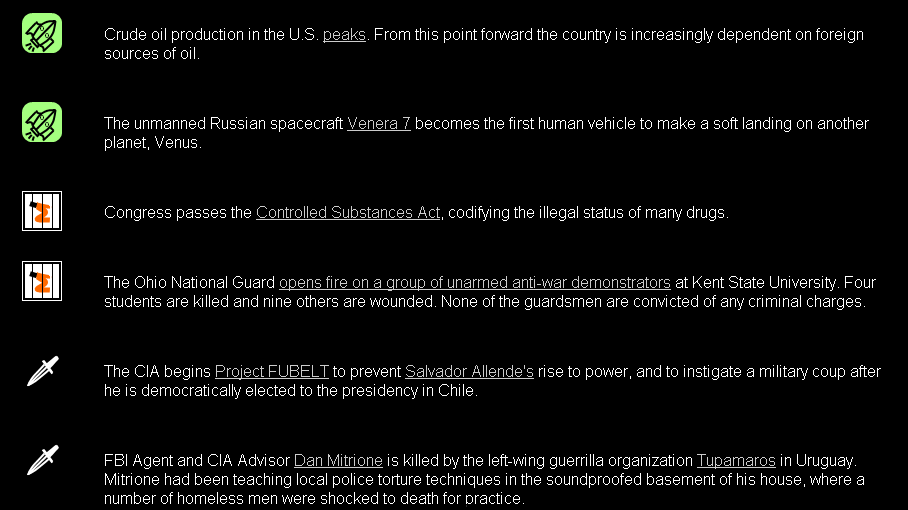 
Personally, I think you should be starting said timeline with 1942