Why is no one talking about this ? NYPD releasing gas in subways

what. the. #. So many things could be going on. Let's not forget how every recent terror attack also had a 'drill' going on simultaneously.

On a serious note, I need to look further into this. Thanks for sharing.

Same as on your second link...

The caption on the picture read "WTF?" 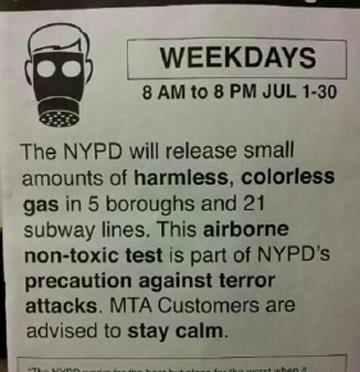 
Me too bro. Not because I'm scared of the subway boogeymen but because I just prefer to walk.

Originally posted by jambala88
If it´s harmless why is there an image of a gas mask?!

I dunno... If these crisps I'm eating don't have real cheese and onions in them then why are they on the packet?

MSDS sheets would be manditory. Why other than for bad
intentions would anyone release anything in a subway.

Something is not right at all here. What are they dumping, or
mutating, or causing?

Something is not right at all.

although its not like its the first time our govt has tested things on
the general public only later to find out it was very bad for the people.
I am sure in time this will prove to be no different.

Seriously if i was in NY I would not go near the subway for a LONG time.


I've seen a couple threads about this over the past two weeks or so. People are talking about it.
Not enough though.

I agree that it gives me a not warm and fuzzy feeling. I'm glad I don't live in NY.

Originally posted by severdsoul
If i was living in NY i would be demanding to know what was
the make up of the gas and what all is in it.

MSDS sheets would be manditory. Why other than for bad
intentions would anyone release anything in a subway.

Something is not right at all here. What are they dumping, or
mutating, or causing?

Something is not right at all.

although its not like its the first time our govt has tested things on
the general public only later to find out it was very bad for the people.
I am sure in time this will prove to be no different.

Seriously if i was in NY I would not go near the subway for a LONG time.

How would you go about demanding this information? Stand in front of the city hall with a megaphone shouting for answers?

posted on May, 12 2013 @ 06:11 PM
link
First of all, this should be illegal. I doubt every person in N.Y. rides the subway. Lastly- Its N.Y. They already allow the state government to tell them how much soda they can drink. I doubt they'll be worried what type of chemicals they subject them to.

posted on May, 12 2013 @ 06:18 PM
link
The test is establishing the flow and spread of biologic and chemical warfare agents through the subways as the vector.

It's been done before...several times over the years. In fact, they once used Rhino-virus if I recall correctly. At least they aren't that sadistic anymore. (Common cold bug). There were a couple threads on this when it first was announced for the testing, tho it never hurts to remind people.

I wouldn't worry about it, personally. If any danger actually existed, the last thing they'd do is announce it was being done and we all know they are perfectly capable of doing a wide variety of things without saying anything to the public.

My only real question is why they figure they need to do the same testing repeatedly. It does little more than rile up the public and keep everyone on edge and scared, in many cases. I've really come to think THAT is the whole point of so much these days. Keep average people from relaxing on any level, keep everyone scared of their own shadow and ready to praise new Government funding or new security programs like it's re reinvention of sliced bread.

Personally? I think the people in leadership and command levels that are pulling these things need shown the unemployment line and probably without the pension they've counted on. Scaring the public when it's hardly necessary (have these whiz kids ever heard of computer models??) used to be the opposite of what they wanted. Now? It's at every turn, in every way. Bad times.


I find this hard to believe...
Arent smokers allowed to light up in the subway tunnels? If so, this would surely ignite the gas and blow the place up.
BTW, I dont live in NY so I dont know if you are allowed to smoke in the subway.


These signs that are being posted are not official! In other words someone NOT OF THE GOVERNMENT made them up to just make people aware of what is going on......

They also posted one of a nuclear site that is near the city.

So it is a give and take situation, what is the government hiding, or why is a private group posting these signs?


What I mean is it's an obvious hoax.


I find this hard to believe...
Arent smokers allowed to light up in the subway tunnels? If so, this would surely ignite the gas and blow the place up.
BTW, I dont live in NY so I dont know if you are allowed to smoke in the subway.


Smoking his prohibited everywhere in public pretty much.You can't smoke in the subway unless you want a baton in the face.

Here's the thing. I can just see it now.

"The suspect was dressed as a police officer and slipped by unseen after deploying [_______ something terrible]. The city will be quarantined and vaccinations may become compulsory"

"He took advantage of our tests and used them to hide his crime. He released [his poison] and no one noticed because we were doing our tests and it looked official"

ITS NEW YORK CITY. THE SUBWAY, people. How many coffins did FEMA buy? think about it.

If you see any cops wearing masks you photograph and film that # and put it on youtube IMMEDIATELY.
edit on 12-5-2013 by DarwinVsJesus because: (no reason given)


What gave you the impression it was a hoax? Did you search for anything before making such a declaration? This pops on the first page of google hits ...and for everyone else, gives more background of what this is and why.

Airborne Terrorist Attack Study To Be Conducted In Subways By NYPD, Brookhaven Laboratory

Bright or well thought out? Not really..... Hoax? A moment of looking dispels that right away.

posted on May, 12 2013 @ 07:25 PM
link
Another shining example of duplicity by the conspiracy-blinded minds on ATS.

If there were a chemical or biological weapon released, and no one was aware of how they would spread in the subways, then people here would be calling for the Emergency Preparedness people's head on a plate for not being prepared.

That they are trying to prepare for a chemical or biological weapon release, the people here are calling for the Emergency Preparedness people's heads on a plate.

Sorry folks, it's one or the other. Do you want to be prepared or don't you?

Stop whining when things are done to prepare. How else are you going to be able to track such a thing without testing? It's to prepare for things being delivered by air currents, therefore they need to release something traceable to see were the air currents go.

The US government has done this before. On the city I live in, back in the Cold War. No one is reporting any ill effect from similar experiments, and they were using planes, cars and roof tops into the open air, so I'm sure they were using an awful lot more chemical than NY is using for a semi-closed system.


Correct, it's been done. Wonder what the backlash was then?

"In 1966, the U.S. Army released the harmless Bacillus globigii into the tunnels of the New York subway system as part of a field study called A Study of the Vulnerability of Subway Passengers in New York City to Covert Attack with Biological Agents.[43][48][49][50][51] The Chicago subway system was also subject to a similar experiment by the Army.[43]"
From Wikipedia.


Maybe the drills are real but that poster sure isn't official. That gas mask just doesn't fit, it implies danger, and what is #greywater? There are no official logos and it has spelling and capitalization errors.