Secrets of the White Horse

In the end of days, when this time-cycle ends, Hindus say that....

At this time of chaos, the final avatar, Kalki, will appear on a white horse. The eight Adityas, or solar deities, will shine together in the sky. Kalki will amass an army to establish righteousness upon the earth and leave the minds of the people as pure as crystal. *

I was reading browsing through Hindu texts when I came upon the white-horse reference. It struck me as very interesting because other religions also refer to the appearance of a white horse in the "end times". 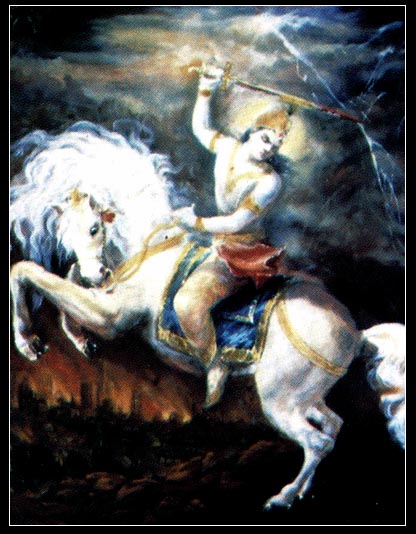 According to Hinduism, one day for god equals up to 8 Billion years for humans, which is one time-cycle.
The current We currently live in the age called "Kali Yuga" which is currently coming to an end. The sign of the "end times" are decay and violence.

According to muslims, the end of days will be marked by the return of both Jesus and Madhi ("the guided one") atop a white Horse to cleanse the world of evil. It is remarkable that a religion which supposedly has nothing to do with another refers to the savior of the world as coming on on a white horse. Hence, Madhi is depicted accordingly: 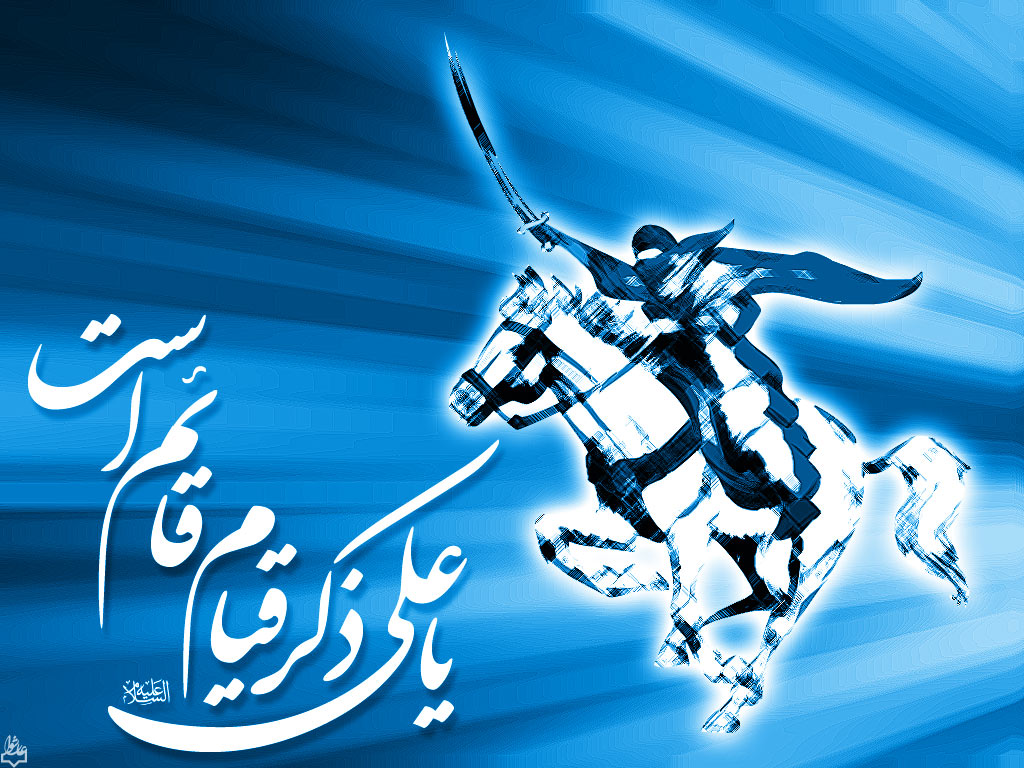 3. The White Horse in Christianity

Many of you are already familiar with the fact that the biblical white horse is one of the harbringers of the "end times". Revelation 6:1 says:

I watched as the Lamb opened the first of the seven seals. Then I heard one of the four living creatures say in a voice like thunder, "Come and see!" I looked, and there before me was a white horse! Its rider held a bow, and he was given a crown, and he rode out as a conqueror bent on conquest.

In Revelations Jesus Christ himself is riding a White Horse right out of heaven, followed by an army of other horsemen to bring judgment to the world. 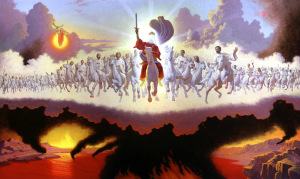 3. The White Horse in Mythology

It doesnt end here. This page shows us that the White Horse features prominently as a mystical symbol across all ancient cultures. Its fascinating that the 3000 year old "Uffington White Horse" as seen on this picture, is only discernable as a white Horse from the air: 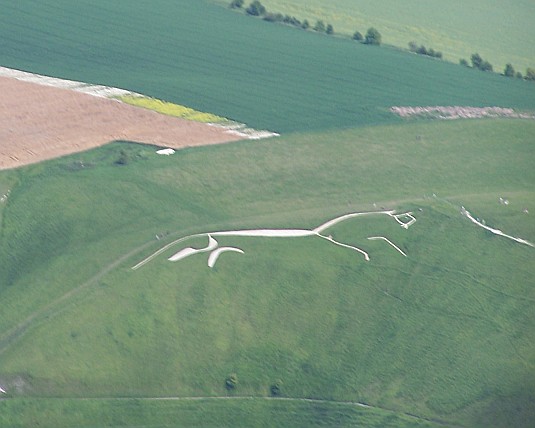 We learn that the white horse has special significance in Norse, Slavic and Greek Mythology, among others and that the White Horse was said to be Buddhas favorite horse.

We also learn that the white horse is mythologically linked to the "sun chariot", whatever that may be.

I submit that if more people were willing to conduct inter-religious and comparitive-religion studies, we might find out more about what the ancients were trying to tell us.

posted on Dec, 17 2012 @ 06:46 AM
link
First thing I thought of when I read "Secrets of the white horse" was that creepy horse at Denver International Airport. Anyhow, here is a great place to start. I found this site a long time ago and spent hours reading. I enjoyed it very much. Morgana's Observatory
You can read about a multitude of predictions form many sources. It includes different religions, Cayce, Nostradumas, the Hopi and many more. You just have to have the time and patience to read it all.
edit on 17-12-2012 by chefc14 because: (no reason given)

A huge white horse appears in Korean mythology in the story of the kingdom of Silla. When the people gathered to pray for a king, the horse emerged from a bolt of lightning, bowing to a shining egg. After the horse flew back to heaven, the egg opened and the boy Park Hyeokgeose emerged. When he grew up, he united six warring states.

Quoting this because lightning-bolts from the sky and shining flying eggs that contain people point to the possibility that the white horse symbolizes some kind of aircraft or advanced technology.

Originally posted by chefc14
First thing I thought of when I read "Secrets of the white horse" was that creepy horse at Denver International Airport. Anyhow, here is a great place to start. I found this site a long time ago and spent hours reading. I enjoyed it very much. Morgana's Observatory
You can read about a multitude of predictions form many sources. It includes different religions, Cayce, Nostradumas, the Hopi and many more. You just have to have the time and patience to read it all.
edit on 17-12-2012 by chefc14 because: (no reason given)

posted on Dec, 17 2012 @ 08:13 AM
link
Awesome thread Sky. White horses are all over the place in mythology, religion, and history world-wide. Seems like I read somewhere the white horse represented power, purity, divinity, judgement, and as you mentioned, is a harbinger or messenger. Even Zeus's favorite flying horse, Pegasus, is white.

You're right, there is much that is held in common, and can be cross referenced among cultures in holy books, as well as mythology and history.

posted on Dec, 17 2012 @ 08:26 AM
link
What about the Native American prophecy concerning the white buffalo.
No one is suppose to ride in on it...but it was prophesied.

The appearance of the white animals to the Sioux was an omen...
An omen of urgency.

posted on Dec, 17 2012 @ 08:41 AM
link
When man domesticated the horse and began riding it, he began to experience power like never before.

Any horseperson will tell you- there is nothing like the experience of riding a horse you are bonded with so that your bodies become one- and you get to feel that strength! -Not to mention the speed, which enabled men to suddenly travel long distances quickly.
The ability to intimdate, battle, lead, impress, those on the ground, while you are mounted gives you a great advantage... the skils of self mastership both physically and emotionally, necessary to form this tandem represents a real lesson in individual power.

It is no wonder that the horse marked the consciousness of man deeply and became a universal symbol for Power.

Some cultures used different color horses to symbolize different kinds of power. White is almost universally used to represent a culmination of all the different "pathways" into one.

That, plus it is really hard to find a REAL white horse (that has no hint of gray) and even harder to keep it white- anyone who can keep their white horse looking white must have some super powers!


Originally posted by chefc14
First thing I thought of when I read "Secrets of the white horse" was that creepy horse at Denver International Airport. Anyhow, here is a great place to start. I found this site a long time ago and spent hours reading. I enjoyed it very much. Morgana's Observatory
You can read about a multitude of predictions form many sources. It includes different religions, Cayce, Nostradumas, the Hopi and many more. You just have to have the time and patience to read it all.
edit on 17-12-2012 by chefc14 because: (no reason given)


A hoary old man upon a mow-white horse shall divert the River Periron, and above the stream he will measure out a mill with his white rod. Cadwallader shall summon Conanus and shall make an alliance with Albany. Then the foreigners shall be slaughtered, and the rivers will run with blood.

Also, your comparison with advanced technology is my thinking as well..........

Flaming white horse coming from the sky = engulfed in "fire", revered, mode of transportation, from above.

Described as it was seen, interpreted and recorded using references of the day.


This one is kinda freaky...It talks of the Constitution "hanging by a thread" and a Mormon riding in a white horse to save the day....HMMMMM

Originally posted by BreathOfFreshAir
I also found this...

I saw that too but didnt reference it because it looks more like that group using White-Horse Mythology for their own teaching. The Native American stuff is interesting though.

posted on Dec, 17 2012 @ 09:16 AM
link
Dont forget there are 4 Horses of the Apocalypse according to the Bible (Revelations). In addition to the "White Horse" there is the Red (War), Black (Death) and Pale (Pestilence). Any references of the other "colors" (of horses) in other religions or mythology?

Originally posted by CosmicCitizen
Dont forget there are 4 Horses of the Apocalypse according to the Bible (Revelations). In addition to the "White Horse" there is the Red (War), Black (Death) and Pale (Pestilence). Any references of the other "colors" (of horses) in other religions or mythology?

posted on Dec, 17 2012 @ 10:57 AM
link
Would anyone happen to know if the White Horse is mentioned anywhere else in the Bible other than Revelations?

As I said, opinion is divided, but it kind of makes sense from a Revelation point of view that if the white horses of other religions are imposters, that Jesus would defeat it and the other 3.

The first "White Horse" with the archer (Revelation., 6) is considered the sower of confusion and discontent, an Antichrist not the deliverer or spiritual guide. Many believe it's a reference to the Babylonian ruler Nimrod who was an accomplished archer (mighty hunter and horseman) and considered patriarch of false religion prior to the exodus. The Messiah/Jesus appears on a white horse carrying a sword (in his mouth) to smite nations, towards the end of the tribulation (R.,19). Saving humanity from following it's lower self to complete anihiliation. But unfortunately, vast majorities do/will not believe or even open their minds/hearts to the possibility of such things! It shall be as it shall be and when it shall be and great suffering will be sure for all of earths inhabitants.

Be that which you so desire LOVE.


The symbolism of Pegasus varies with time. Symbol of wisdom and especially of fame from the Middle Ages until the Renaissance, he became one symbol of the poetry and the creator of sources in which the poets come to draw inspiration, particularly in the 19th century. Pegasus is the subject of a very rich iconography, especially through the ancient Greek pottery and paintings and sculptures of the Renaissance. Personification of the water, solar myth, or shaman mount, Carl Jung and his followers have seen in Pegasus a profound symbolic esoteric in relation to the spiritual energy that allows to access to the realm of the gods on Mount Olympus.

In the 20th and 21st century, he appeared in movies, in fantasy, in video games and in role play, where by extension, the term "pegasus" (plural: "pegasi"[citation needed]) is often used to refer to any winged horse.

He is a winged divine horse, or pterippus,[1][2] usually depicted as white in colour. He was sired by Poseidon, in his role as horse-god, and foaled by the Gorgon Medusa.[3] He was the brother of Chrysaor, born at a single birthing when his mother was decapitated by Perseus. Greco-Roman poets write about his ascent to heaven after his birth and his obeisance to Zeus, king of the gods, who instructed him to bring lightning and thunder from Olympus. Friend of the Muses, Pegasus is the creator of Hippocrene, the fountain on Mt. Helicon. He was captured by the Greek hero Bellerophon near the fountain Peirene with the help of Athena and Poseidon. Pegasus allows the hero to ride him to defeat a monster, the Chimera, before realizing many other exploits. His rider, however, falls off his back trying to reach Mount Olympus. Zeus transformed him into the constellation Pegasus and placed him up in the sky.