Pegomastax dinosaur had a beak, bristles and fangs

Pegomastax dinosaur had a beak, bristles and fangs


IT had a fanged beak, quills and a face only a mother could love. But this cat-sized dinosaur is causing a sensation among scientists.
The new species of plant-eating dinosaur (though you'd never believe it with those viscious fangs in its mouth) was recently found amid a collection of uncatalogued fossils dug up in southern Africa in the 1960s.

They managed to find this 'hidden' in some other fossils. A very strange looking creature that looks remarkably parrot-like and looks to be yet another link from dinosaurs to birds.

It has a parrot beack with large fangs, but was apparently a plant eater. This is one of the smallest dinosaurs ever found.

www.adelaidenow.com.au
(visit the link for the full news article)


Lets throw a picture up of that sucker - remarkable, kinda reminds me of my ex-girlfriend....... 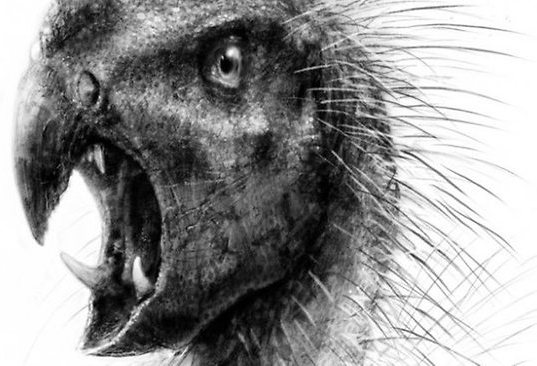 Seriously though, S&F - I enjoy learning about these sorts of things.


Thanks, even if the OP wasn't very concise or informative, I really do enjoy any new find like this. There is so much us humans still don't know.


LoL you dated her too huh?


Great find OP it truly bring out the nature of the beast.

posted on Oct, 4 2012 @ 08:49 AM
link
You do realize the scarse hair/feathers on the surface are just a theory. I would imagine its a bird. And Dino's ae big birds. They probably had lots of feathers.

Reptilies, they are not! Too much vascular systems in the bones. They're extremely hot blooded. Like a bird.
edit on 4-10-2012 by Unity_99 because: (no reason given)

posted on Oct, 4 2012 @ 01:05 PM
link
I am sort of going to agree that it ate insects like some in the article suggest. I think it might have eaten berries as well. To be honest I think its diet might have been similar to that of a modern raccoon or wild pig. I think it ate more than just leaves having teeth like that.

I would also say they are right in suggesting that the teeth were for defense and also in competing with one another. If they were herd type dinosaurs I would say they aided in the setting up of a pecking order.

I personally think it is an awesome looking little dino.

I hope this does not turn out to be another Chinese fake fossil.

They have even fools experts for a time. China (and a few other places) are well known for very realistic fossil fakery.

A bizarre covering of bristles, something like that of a porcupine, likely covered most of the body of Pegomastax, which measured less than two-feet in length and weighed less than a housecat. These bristles first came to light in a similar-sized heterodontosaur, Tianyulong, discovered recently in China and described in the study. Buried in lake sediment and covered by volcanic ash, Tianyulong preserves hundreds of bristles spread across its body from its neck to the tip of its tail.


What a strange yet fantastic dino.


I would love to have one of these little guys running around my house.


T-Rex was a relative of the chicken.

A comparison by Asara's team of the amino-acid sequence from the T. rex collagen to a database of existing sequences from modern species showed it shared a remarkable similarity to that of chickens.

Using a variety of techniques, the researchers compared the T. rex and mastodon protein sequences with those of 21 living animals, including ostriches, chickens, and alligators.


Something to consider next time you visit KFC