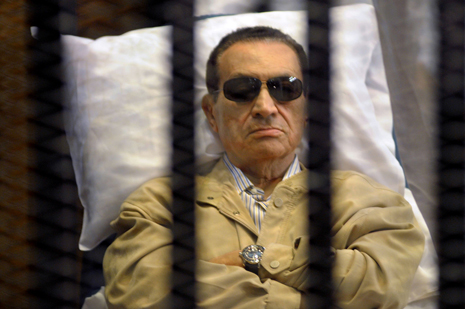 84 year old Former Egyptian President Mubarak is said to be clinicaly dead after suffering cardiac arrest and a stroke..

"We were informed by prison authority that Mubarak's heart has stopped and they used electric shocks and CPR to resurrect him," Adel Saeed, official spokesman of the Egyptian prosecutor, told CNN. "He is now on an artificial respirator and doctors from the armed forces and International Medical Center will inspect him.

As with any breaking news story we have to wait out the storm to get the real news, Ill keep posting what im hearing but as all things news can change in a heart beat,

Egypt's ex-president Hosni Mubarak was declared clinically dead after he was transferred to hospital from prison, state media reports -AFP

Trying to get further confirmation,

He is 84 years old and was sentenced to life in prison only a few weeks ago, His health has been deteriorating ever since his sentencing,

CAIRO (AP) — State news agency says Mubarak’s heart stopped beating, not responding to defibrillation.
edit on 19-6-2012 by asala because: (no reason given)


CAIRO (AP) — State news agency says Mubarak’s heart stopped beating, not responding to defibrillation.
edit on 19-6-2012 by asala because: (no reason given)


That is "Clinical Death" Thats why they used the term. Heart has ceased and no reactions to defib, Resp stop and brian function slows and stops. Thats Clinical death or


Yes he is the Former ruler, He stepped down after the massive protests in Tahrir Square, Rule was handed to the militery,

He was put on trial a few weeks back and was sentenced to life..


Egypt's Last Pharaoh? The Rise and Fall of Hosni Mubarak
Read more: www.time.com...
Have a little read about the fella, www.time.com...
edit on 19-6-2012 by asala because: (no reason given)

Egypt's Mubarak unconscious and on a respirator, Not clinically dead, according to 2 security guards who spoke to reporters at reauters

posted on Jun, 19 2012 @ 04:56 PM
link
I dont believe it for a second.
The man looked fine in all the pics that were released, sure he was laying down pretending to be comatose, but i have no doubt he is undergoing plastic surgery at the expense of the CIA and has some lush villa prepared and stocked for his lifestyle.

If he is pronounced “clinically” dead or just plain dead, then miraculously comes back to “life” would he still be in prison since he technically “died” in prison?

Originally posted by tluna1
reply to post by asala

If he is pronounced “clinically” dead or just plain dead, then miraculously comes back to “life” would he still be in prison since he technically “died” in prison?

I want to hire you as my lawyer...

Egypt's ex-president Hosni Mubarak is believed to be unconscious and not clinically dead as initially reported, two security sources have told Reuters.

Hopefully soon there will be some form of news conference...

posted on Jun, 19 2012 @ 05:25 PM
link
I bet they used the electric shock before his *ahem* cardiac arrest.
After decades of outstanding performance Mubarak was no longer needed by his management TPTB, it's a sad world we live in and sometimes you don't even get a watch to show them kids where daddy's been working.

posted on Jun, 20 2012 @ 01:21 AM
link
Eh, who cares? He certainly isn't coming back to power, so he's now a part of history but not much in the way of news, per se, dead or alive. He is rather old, in poor health, and in prison, which unless its a resort prison, probably not the best healthcare available. Did anyone expect him to do otherwise? There are far more important things going on in Egypt alone. The military taking more power and pretty much negating the recent elections, which was won by a Muslim Brotherhood candidate.... neither of which I prefer to see in power, and neither of which many of Egypt's people prefer to see in power either. Yes, the Muslim Brotherhood candidate did win the majority but it is also a long lived institution in Egypt (though illegal for years), but also the only one with a power structure and base that had a chance to run a candidate, as opposed to the newly protesting youth and progressive populace which didn't have time to form a structure to propel a progressive candidate into office. The old school candidate that lost was part of the old power structure, so he also had people with this kind of experience. I personally believe that if there had been enough time for the progressive people to join up and form political parties, there might have been a different electoral outcome where neither people from the old power structure or an Islamic structure that will be regressive in freedoms (repressive vs regressive) would have won, but a newcomer that might lead Egypt into a more socially civilized society.

He wasn't revived. He was RESURRECTED!

To answer the above about "Who care" I guess yes it makes no difference if he is alive or dead, But... To the people it will, They seem him as a cause in a corrupt life they had to live under his rule, So like any former so and so it just gives some "justice" to those who feel he killed and ruined lives, I guess just a bit of closure for many of the Egyptian peoples,


Not really, as Mubarek did the will of others for most of his tenure. If people really believe he was the cause of everything, and his death provides some solace, they are sadly confused.