Is the TEA party sabotaging the economy to make Obama fail? 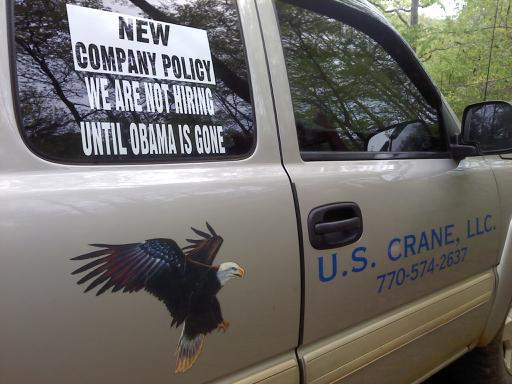 A liberal blog site is claiming that a TEA party leader has instructed businesses to not hire any new workers until Obama is out of office. The sign on the side of the work truck speaks volumes, showing that at least some businesses are taking this seriously.

Not too long ago, a Tea Party leader sent a message to Tea Party groups to not hire people so that the economy can fail. Their goal for doing so is to make President Obama fail. The message urges small businesses to refrain from hiring until President Obama is out of office. At least one business, U.S. Crane LLC, is doing just that.

The photo was submitted to the Americans Against The Tea Party Facebook page by a resident who spotted the vehicle. According to that resident, he placed a call to the man who put up the sign, Bill Looman, and asked for comment and was told that hiring would resume when there “isn’t a Muslim in office.” Looman claims to be a former Marine.


It makes one wonder if the reason the economy is failing may have more to do with conservatives response to Obama in office and less to do with his actual policies. Sure, his policies do hurt businesses but, to what extent do conservative resistance to all of his policies have in prolonging the economic mess we are in?

Do you think conservative resistance is responsible for much of the unemployment situation in the US today?


I do not think a few tea partiers are responsible for the unemployment rates. Conservative politicians are though. As voters they are. As business owners they don't mean much.

My first reaction to that sign is that they're no longer employing illegals. Good, I see trucks just like that doing it far too often as it is.

Looks like propaganda to bash Obama.
edit on 22-11-2011 by Evolutionsend because: (no reason given)

posted on Nov, 22 2011 @ 11:15 AM
link
Please, now that is really grasping at straws. obamas doing a good enough job of sabotaging the economy all by himself, he doen't need any help.


Can't you already see? Obama HAS failed already. He doesn't need the Tea party to sabotage him, he did it to himself by allowing corporate bailouts, creating laws which allow the rich to avoid paying taxes, starting unprovoked wars in the Middle East.

How much more needs to happen to YOU and this country before you get it into your skull. These people need to be replaced (both Democrats and Republicans). They are not working for you, they're working for them...which is against YOU.

Please, for God's sake, READ THIS without any partisan influences distorting your views...

posted on Nov, 22 2011 @ 11:28 AM
link
I think people are giving too much credit to the "tea party" if they think the Tea Party has intentionally crashed the economy. Obama did that all by himself, with some help from Bushes actions before he vacated the white house.

So this company isn't going to hire ANYONE until Obama leaves office? Better hope he doesn't somehow win a second term. And really, you could very well be depriving one of your fellow Tea Party-ers by doing this.

These are the same guys who turned "by American" into a racist movement, sorry, they simply aren't that meaningful or powerful.

Lets blame everyone and everything EXCEPT obama for his failures as president..

Yeah, some teapartiers and some darn conservatives are responsible for the failed economy...

Are you, or anyone deluded enough to actually believe this?

Some redneck with a sign on his pickup truck made the economy fail because he never supported obama..


"Is the TEA party sabotaging the economy to make Obama fail?"
No. He's failing all on his own.

posted on Nov, 22 2011 @ 11:50 AM
link
In order for you to even pose such a question, you have to be completely blind regarding the damage that this president has done. I hope that you snap out of it, and see just how harmful this guy has been. His vision of America has been distorted by hate filled mentors his entire life, and the last thing he cares about is maintaining a 'middle class' in this country. Electing this guy was the biggest mistake in the history of democracy.

posted on Nov, 22 2011 @ 11:57 AM
link
I would like to point out, like I do in all threads about the Tea Party, originally it was a non partisan movement against bail-outs(just like OWS), then it was quickly co-opted by republicans.

That co-opting was enable by both the republicans who claimed it as their own, and liberals like OP who jumped on board attacking the movement, officially making it into a partisan movement.

That's how divide and conqueror works, and that's how people are kept sleeping.

The economic problems we are currently facing is the product of the Plutocracy which we have built up over the years.

It is both the Republicrat's and Demacran's faults, the blame game just keeps the tragic joke going longer.

Let's remember who we are dealing with. Ben Bernake, chairman of the federal reserve, the man who controls money production, makes secret bail-outs in the trillions, and sets interest rates... Yeah that dude. He was Bush's financial adviser, then bush made him "King" of the Fed.

Then after that, since he did such a great job with Bush to control the economy... Obama reappointed him as Chairman of the Fed again Lol, so much for "change"

OP, you understand how this partisan propaganda ONLY self perpetuates and keeps the blame off the real issue?

Originally posted by dillweed
In order for you to even pose such a question, you have to be completely blind regarding the damage that this president has done. I hope that you snap out of it, and see just how harmful this guy has been. His vision of America has been distorted by hate filled mentors his entire life, and the last thing he cares about is maintaining a 'middle class' in this country. Electing this guy was the biggest mistake in the history of democracy.

Meh, he's on par with Bush. I think if Bush stayed in office, today's situation would be pretty similar to what it is anyway...
edit on 22-11-2011 by CREAM because: (no reason given)

posted on Nov, 22 2011 @ 12:10 PM
link
reply to post by CREAM
I totally agree. There is no difference between the the two parties, and our only chance for real change is Ron Paul. I'm convinced he believes his best chance for election is to play the game by the rules, but he's certainly not controlled by the republican party.


Believe me, I have no illusions about one party being any better than the other. I hate the Republicans and Democrats BOTH and see them as two sides of the same coin, both leading down the same path of destruction.

Their partisan bickering is only a smokescreen to keep us distracted and prevent us from coming together to fight against their tyrrany. As long as about half of the American people believe that, if only they can get "their people" into office then everything will be better, they keep us divided against ourselves so that we don't work together to fight the corruption around us.

The reason I posted this is to point out that both sides are contributing to the economic mess this country finds itself in. The one side by pursuing policies that hurt business and the other by preventing any action that could aid the economy until the current POTUS is out of office.

posted on Nov, 22 2011 @ 01:05 PM
link
Yes yes and double yes.
Although the tea party is a tiny part of the scheme.
It's the Chamber of Commerce & all those Right Wing astro-turf 501c's
that get their money from
China India and Russia to keep American Jobs overseas.
Real Patriotic huh?
This president is up against more subversion than any I can think of in my lifetime.
And the disrespect..don't get me started.
It should be a crime when sabotaging the economy is politics.
There is nothing American about that.
A lot of them should be held on economic terrorism charges.

No one knows what osbama is doing... therefore NO ONE FEELS CONFIDENT hiring.. however this is awesome... I want that sticker too..

AWESOME find.. made my day

Is the TEA party sabotaging the economy to make Obama fail?


No. Obama is doing a good enough job of failing all on his own. No one has to 'sabatoge' him.
Heck .. at this point even his boot-licker in chief - Chris Matthews - can see that.

If the Tea Party is so strong as to cause companies not to hire, limiting the debt ceiling ( nearly ) and causing such pain and distress to Obama, don't you think we would have been able to do more?

I mean, we hate the Patriot Act, we can't stand the TSA, DHS drives us nuts, we don't want Obamacare, and Kathy Lee Gifford is still on the air.

If we were that facking powerful, we'd have at least gotten Kathy Lee off the air AND saved Kim Kardashians wedding!

Originally posted by beezzer
Let's play a little game of logic, shall we?

If the Tea Party is so strong as to cause companies not to hire, limiting the debt ceiling ( nearly ) and causing such pain and distress to Obama, don't you think we would have been able to do more?

I mean, we hate the Patriot Act, we can't stand the TSA, DHS drives us nuts, we don't want Obamacare, and Kathy Lee Gifford is still on the air.

If we were that facking powerful, we'd have at least gotten Kathy Lee off the air AND saved Kim Kardashians wedding!


RIGHT? and the dude not hiring looks like hes in the 1%


The Economy is going to fail regardless of the Tea Party's actions.

The economy needs to fail. We need to quit bailing it out. We need to take our lumps now, while we still can, and while there is still hope for our children and grand-children.

Stop spending future money for a little temporary comfort now. Let the dam thing go down in flames, put a Ron Paul or Gary Johnston or equally conservative outsider in office, and put the government back on the right track. The narrow track. The extremely limited and focused on the Constitutional authority track.

Let the Free Market take care of itself. Let the bad businesses fail. Let the unemployed hurt a little bit, and then it will drive new markets, and new innovations, and new industries.

The Tea Party and the OWS are both equally important and valuable, and also both equally misquided and irrational. I support them both, but I admit they both have their problems and issues.

In my opinion, any means justifies the end at this point. We absolutely must shrink the government and get its nose out of places it doesn't belong, and we need to get deep into this depression we have sooooo earned, and we need to get on with the business of rebuilding instead of delaying the inevitable.

posted on Nov, 22 2011 @ 01:42 PM
link
No the TPM isn't Obama dug his own hole pushing the same thing that got us to where we are today when we have 25 million unemployed and another 50 million on welfare for a grand total of 75 million out of work/underemployed the blame goes on him and those same failed social engineering programs that have led this nation off the cliff without any hope or change.

Until people recognize the problem there is not one person who can fix it tax and spenders just keep digging.