UFO Technology: Ideas concerning Nazi UFO's (This could be it!)

Is this it? I'm not a scientist or engineer but I just had a thought and possible an answer to a question that has kept me busy for the las 8 years. I hope some of you have more knowledge concerning electrostatic phenomena and have a look at my ideas.

There is an awesome documentary about the Nazi UFO's, the problem is that it is in German, however there is an English version but the translation is wrong. Either it was a very bad translator, or it was done on purpose to withhold crucial/important information. I don't know, but I've been researching the statements made in the German version and it seems that most of it is true.
This is the original version:

And this is the dubbed version which has a very poor quality and is shorter in length:

One quote kept running true my mind ever since I saw this documentary for the first time 8 years ago.
The technology that the Nazi's supposedly (re)discovered was;
"Ein Prinzip von genialer Einfachkeit"
(A Principle of ingenious Simplicity)
In other words, the Egg of Columbus.

So, are we making it ourselves too difficult? That might be true.
It's the picture below that finally made sense to me. 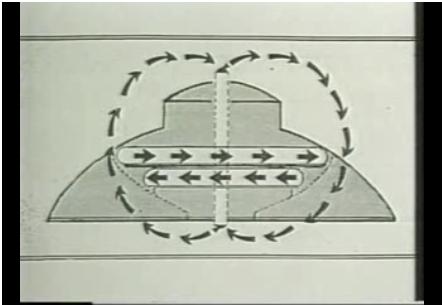 Now watch the opening of this video:

The machine that you see is a Electrostatic Generator

In other words, a machine that produces static electricity, you know, the stuff that discharges if you take of a pullover but also has properties that looks a magnetic effect but in fact is a gravitational effect, there is no magnetite or iron involved. Just watch this short clip to see what I mean:


So in short, the discs you see in the Disc are a large electrostatic generator which could lead all the electricity it produces into a Tesla Coil. 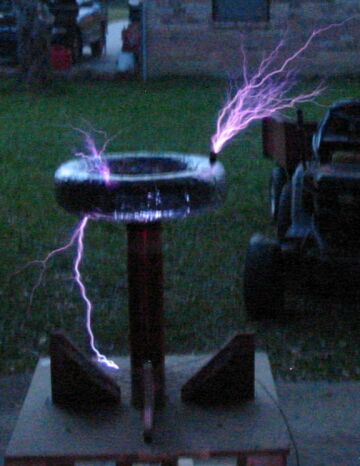 Source Picture
Maybe you have to insulate the generator and lead all the electricity to the outside of the disc and the ground on the bottom of the disc. It is also possible that with or without insulation and/or the proper metallurgic compounds the generator causes an electrostatic vortex/sphere which could possibly cause a levitation effect, repelling from the earth's electromagnetic/static field. This theory gives the video below more credit. Especially the part about the landing platforms.


It also explains the colors that UFOs tend to show at night or the very bright luminous objects during daytime. 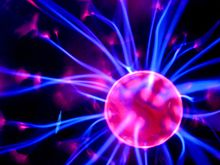 But there is more, as mentioned above, it might produce a vortex. This corresponds with theories proposed by Russian scientists about black holes that are very close to earth caused by this effect.
Please watch the video below from 2:00. The pictures explain themselves.

My main question is, what will happen if you configured the coil and generator as proposed above, what effects will it cause? Just to see a Tesla Coil in action is amazing, how will it respond to the discs from the electrostatic generator?


Thank you for reading this post, I'm looking forward to your reactions.

posted on Nov, 20 2011 @ 03:48 PM
link
That picture of the ufo.. looks exactly like the same principle which was was outlined in the Thrive documentary.. In the open source energy research the vortex has been seen also,.. and still investigating.

Originally posted by Regenstorm
reply to post by nv4711


Here we go again.
Please take your rant to somewhere else.

No rant - contrary to this so called "documentary" just facts.


I understand, but this thread isn't about that documentary.

Thing is, this is a hot potato. The fellows during 30&40s managed to combine magnetics, vortex and gravity through experimentation and observation. No scientific dogmas - just pure engineering and getting it done. And they did it so well, it is still such a sensitivity black tech area.


Thanks for the link, very interesting stuff. It supports my theory.

BTW, it's these vortexes that are the specialty of Viktor Schauberger who designed the Repulsine.
A copy of that mahine can be seen in this video at 01:08:00:

posted on Nov, 20 2011 @ 08:04 PM
link
Hello all.
Im new at this site but yes i saw some strange fact maybe fiction in the nazi ufo to.
what would u think of the idea that the us actualy took these vessels and tried to fly in them thus creating the roswel incident.
covering it up by telling its a weather balloon.
gues we already know that the area 51 is a top secret research facility.
and there are already on this forum too numerous accounts that support such a theory.
although i never seen someone put these together.
they brough werner von braun so why not the science of the v7 projects or flying disk if you will.
what are your ideas on this ?
sorry for the bad english not my own language
cheers.

Originally posted by deamon75
Hello all.
Im new at this site but yes i saw some strange fact maybe fiction in the nazi ufo to.
what would u think of the idea that the us actualy took these vessels and tried to fly in them thus creating the roswel incident.
covering it up by telling its a weather balloon.
gues we already know that the area 51 is a top secret research facility.
and there are already on this forum too numerous accounts that support such a theory.
although i never seen someone put these together.
they brough werner von braun so why not the science of the v7 projects or flying disk if you will.
what are your ideas on this ?
sorry for the bad english not my own language
cheers.


cheers. Uncover the lies and misdirection. A scientist has real data referencing proof of an underground base run by aliens in New Mexico. He went to the government, they ended up monitoring him, breaking into his house to recover the instruments providing his proof. One of the Colonels involved with the presentation of his data, is mentioned in 3 cross references in research to have agreed with the civilian scientists findings of an underground alien base. It is true.

posted on Nov, 20 2011 @ 09:02 PM
link
Very thought provoking vids. I too am neither an engineer nor a scientist just another faceless responder trying to piece the puzzle together. Hopefully here's a couple pieces for you www.youtube.com... and www.youtube.com... ... I recommend you watch his other vids about "tuning static streams", "lets build a space ship" and related. Very interesting. It struck me on one of "chuck's" video's he mentions that certain shapes attract more static than others. These shapes happen to be UFO shapes just like the top of Tesla's Wardenclyffe tower. Tesla was tapping into the extreme high voltage static streams coming down from the upper atmosphere and transferring/transforming them into usable ac or dc voltage. It seems that Victor Schauberger and Tesla were on the same page. I suspect the Nazis were using these devices (UFO's) to attract energy and drive the propulsion engines for these devices making them a self contained unit. If not, they very well could have been atmospheric static collectors not requiring to be placed atop a tower, maybe with some sort of internal moving parts to amplify static collection kinda like helicopter blades in dust storms,scienceblogs.com... Not quite enough puzzle pieces yet. Thanks for your contribution.

Good job, I love this subject and there is absolutely something to it, exciting isn't it?!

here is a step in the right direction: Die Glocke (funny - no german version, guess why [-> highly censored topic in germany])

and we all know about the stealth bomber - the sooo mighty & revolutionary american weapon^^
news.nationalgeographic.com...

Those VRIL discs manufactured in Brazil in the late 40's - crazy, how on Earth did they manage to invent an invisible cloaking shield back then? Geniuses.