posted on Jun, 2 2011 @ 12:44 AM
link
I did a search on the title and did not find anything. My internet went down and just came back up. This story was on the front page of my internet explorer.

Few things capture the public's curiosity like Area 51. The top-secret military base (which doesn't officially exist) has been the subject of conspiracy theories for decades. What actually went on there? Something tells us we'll never know for sure. However, a recently revealed series of photographs provides some tantalizing new clues.

The photos, which were published by National Geographic, show a titanium A-12 spy plane. In one image, the satisfyingly sci-fi-looking plane hangs upside down while it is prepared for radar testing. In another shot, a group of officials with heavy equipment "remove all traces of the A-12 spy plane" after it went down in the Utah desert in 1963.


See some previously unreleased photos of Area 51 (below)

Of course, the photos don't prove that alien life exists--but they do go a long way toward proving the government wasn't exactly forthcoming with what was going on at Area 51. Cue the "X-Files" theme song.

If this has been posted already, please remove the thread. I do use the search function. I will take the time to post some of the pics in a minute. It takes me a minute and it is laundry time.lol

The ole lady is complaining pretty heavy. To put it nicely.

Here are the pics. [atsimg]http://files.abovetopsecret.com/images/member/6667a8d59b43.jpg[/atsimg]Workers attend to a titanium A-12 spy-plane prototype before the futuristic flyer undergoes radar testing. Area 51 Spy Plane, Intact


[atsimg]http://files.abovetopsecret.com/images/member/4fe0b6a92a6f.jpg[/atsimg]The remains of the A-12 spy-plane are seen here spread across the Utah desert in 1963. The plane's pilot, Ken Collins, was able to safely eject beforethe plane crashed. Stranded Far From Area 51.«

[atsimg]http://files.abovetopsecret.com/images/member/8cb856ae078c.jpg[/atsimg]This photo, taken in the Utah desert in 1963, shows a crane lifting the remains of the destroyed A-12 spy-plane onto a flatbed truck. Loading Spy-PlaneDebris.
news.yahoo.com/n photos/New-photos-Area-51/ss/events/wl/060111area51#photoViewer=/ydownload/20110601/photos_net_web_wl/1306961305 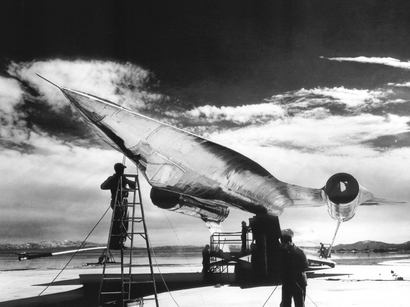 Originally posted by QuantumDisciple
Cool photos! The A12 was a precursor to the SR-71 or RS-71 I believe.

The Sr-71 Blackbird used to be, and still is, one of my favorite planes.

Maybe tey will release more. I wouldn't hold my breath.

Originally posted by YouDeserveToKnow
I think i saw this in the phantom menace. I hope George Lucas doesn't see it

I recall seeing (very recently) a television program called "Area-51: Declassified" or something like that. It talked about the early days of Area-51, the U2 program, the "Oxcart" program (A12 apparently), etc. While it certainly didn't disclose everything about those programs, and didn't talk at all about any current programs that might be underway at Area-51, it did a very good job I thought about covering the U2 and Oxcart/A12/SR-71 programs.

I suspect this was because many of the folks that worked very hard on those programs, and put-up with all the security working on those black-projects are getting older, and somebody (Defense Department? Lockheed?) wanted to ensure there was some way to see that their work could be "Officially" and "Publicly" acknowledged before they all passed away.

I thought it was a very good program, even though it didn't confirm that Kennedy's brain is being held in a Mason jar there, next to the Star-Gate that is used to teleport people to/from Big-Foot's home planet.

Originally posted by QuantumDisciple
Cool photos! The A12 was a precursor to the SR-71 or RS-71 I believe.

Very cool indeed. I was about to post this absolutely looks similar to the SR-71 but you beat me to it lol. Nice find OP!

I suspect this was because many of the folks that worked very hard on those programs, and put-up with all the security working on those black-projects are getting older, and somebody (Defense Department? Lockheed?) wanted to ensure there was some way to see that their work could be "Officially" and "Publicly" acknowledged before they all passed away.

Ths is a good explanation.

The technology is (obviously) old too. A little out dated compared to the B-2..lol..... I think that this was a good move. I am glad to see that these men will see their work in the public view for all to appreciate.
edit on 2-6-2011 by liejunkie01 because: sorry quote marks instead of offsite mat

At this point, I don't believe there is any faster plane operational than the A-12 or SR-71. NASA has hypersonic test aircraft, but nothing that can carry and man and payload cross country in an hour. And they designed it with 50/60s technology.


I seem to recall there being a pattern of sonic-booms over Southern California in the 1990's that were unexplained. They started out over the Pacific Ocean, and ended somewhere in the vicinity of Southern Nevada (aka toward Area-51), and implied the operation of a Mach 4+ something - usually attributed to the alleged "Aurora" program.

That would presumably be beyond the operational constraints of the SR-71 and related craft. Of course, to be fair, it might have been something purely experimental that never went "operational".

Here's a small clip from the Wikipedia page about Aurora ...


A series of unusual sonic booms was detected in Southern California, beginning in mid- to late-1991 and recorded by U.S. Geological Survey sensors across Southern California used to pinpoint earthquake epicenters. The sonic booms were characteristic of a smaller vehicle rather than the 37-meter long Space Shuttle orbiter. Furthermore, neither the Shuttle nor NASA's single SR-71B was operating on the days the booms had been registered.[11] In the article, "In Plane Sight?" which appeared in the Washington City Paper on 3 July 1992 (pp. 12–13), one of the seismologists, Jim Mori, noted: "We can't tell anything about the vehicle. They seem stronger than other sonic booms that we record once in a while. They've all come on Thursday mornings about the same time, between 4 and 7."[5] Former NASA sonic boom expert Dom Maglieri studied the 15-year old sonic boom data from the California Institute of Technology and has deemed that the data showed "something at 90,000 ft (c. 27.4 km), Mach 4 to Mach 5.2". He also said the booms did not look like those from aircraft that had traveled through the atmosphere many miles away at LAX, rather, they appeared to be booms from a high-altitude aircraft directly above the ground moving at high speeds.[12] The boom signatures of the two different aircraft patterns are wildly different.[4] There was nothing particular to tie these events to any aircraft, but they served to grow the Aurora legend.

I remember very well feeling a couple of those booms, in socal, right in that time period, and exactly as described.

Originally posted by gariac
So why does NASA bother with their hypersonic program when mach 5 aircraft existed in the early 90s?

Nasa has me questioning their intentions alot lately. I am still hoping that they will pull one big project out of their messed up books(was going to say something against T&C there) and restore Nasa back like it was in its glory days. Don't get me wrong, the space station is alright, but then what?

Originally posted by gariac
So why does NASA bother with their hypersonic program when mach 5 aircraft existed in the early 90s?

Because the technology that was being tested in the late 80's and early 90's was, although cool stuff, totally impractical for any type of production aircraft, too expensive to operate, and overall nothing more than a learning experience. The whole thing was junked, and further testing was moved on down the line using the data from these original programs.

Nasa's scramjet is pretty cool, and a direct result of modern computer design combined with data from these early hypersonic trials.


Your logic is ... well ... not very logical. You claim we had mach 5 aircraft in the 80's and 90's, but they weren't practical. You can hardly call the NASA aircraft anything but test vehicles. They are not even manned. Even worse, they are air launched.

Now seriously, if Aurora type aircraft existed in the 80's or 90's, the NASA hypersonic aircraft would be significantly more advanced than they are now.

You claim we had mach 5 aircraft in the 80's and 90's, but they weren't practical. You can hardly call the NASA aircraft anything but test vehicles. They are not even manned. Even worse, they are air launched.

We had testing platforms, not like we had a fleet of "aircraft" sitting at an airport somewhere, lol. I thought that was clear in my post that someone would be able to deduce that. I didn't call the NASA vehicles anything, certainly didn't call them anything more than test vehicles, since that's what they are. Yes, they are air launched, thanks for pointing that out, lol. Oh yeah, and unmanned too......just like the test vehicles in the late 80's and early 90's.

Now seriously, if Aurora type aircraft existed in the 80's or 90's, the NASA hypersonic aircraft would be significantly more advanced than they are now.

Again, I apologize, I realize you have no experience dealing with the government or military at this level, and can easily see how this ignorance can lead someone to think that there is a natural, linear progression of such technology as if it were something being developed privately and for profit. And Aurora was not an aircraft. Either way, yes they had hypersonic testbeds back in the day. Unfortunately, as I said they were not practical, and testing indicated they would not be reliable without billions of dollars of new material science put into the engines they were trying to use. It was this engine maintenance that forced the program(s) to be scrapped and to have others pick up the mantle a few years later and try something else. The NASA scramjet is a small testbed that is being used just to test the actual scramjet engine, and not the final product if it turns out to be practical. Once they get this engine testbed done and everything works out, they can then design a standard plane that can take off and land under it's own power and switch to a scramjet when hypersonic flight is desired. But there is no point to design such a plane at this point until the engine testing is done. Thus the boring, a small scale and unmanned testbed that seems to be too boring of a reality for you to properly comprehend is being used.


Corvairs competition to the A12.

The Kingfish reconnaissance aircraft design was the ultimate result of a series of proposals designed at Convair as a replacement for the Lockheed U-2. "Kingfish" competed with the Lockheed A-12 for the Project Oxcart mission, and lost out to that design in 1959.


Thank you for the information....Definite star for you....

That is pretty badazz.....I didn't even know anything about this thing.


Thank you for the information....Definite star for you....

That is pretty badazz.....I didn't even know anything about this thing.


I especially like this view, wonder where the design for the stealth fighter came from