The American way of life is dead…

The American way of life is dead…


.... and like a beheaded corpse, still stumbling around, it has yet to come to that realization that should be obvious to anyone.

The American way of life, a system unsustainable by any stretch of the imagination, was facilitated on two facts: cheap gas and a valuable currency, the currency than morphing into cheap credit.

posted on Oct, 10 2008 @ 12:39 PM
link
Has the bubble finally burst, I have been told by many Americans on ATS that they live inside the bubble and all others are outside of it but are they now on the outside like the rest of us.

Have the times of cheap food, fuel, cars and all the rest of it finally ended and if it has what does it mean for the average American family or individual. How will the people survive what has been the reality for billions of others for their entire lives.

english.pravda.ru
(visit the link for the full news article)

How will the people survive what has been the reality for billions of others for their entire lives.


Yea, because the US is the only place in the world that has technology and packaged food.

What are you on about?? Do you honestly think that your country is going to completely collapse back to the stone age??

At the very very worst, after 5 years, you will be all be equal to wealthy Chinese or pretty well off people from the Ex Soviet, now EU, Eastern European countries.

Its not like you are all relocating to Nigeria.

and like a beheaded corpse, still stumbling around, it has yet to come to that realization that should be obvious to anyone.

My God, beheaded corpses in Russia still stumble around? Exactly how bad was Chernobyl?

Translation: More propaganda from Russia. Our way of life may be changing for the worse, but we're taking the rest of the world down the same path so comparatively speaking we'll still have it better than the rest.

posted on Oct, 10 2008 @ 01:34 PM
link
I might not be able to visit Starbucks in the morning. So what? I goto Dunkin Donuts now for half price....And I've actually found that their coffee is better anyways....lol.

American way of life dead.....who writes these things? It's not an american thats for sure.

posted on Oct, 10 2008 @ 01:39 PM
link
Yes, Pravda is very strongly controlled by the Russian government and virtually anything the "report" will have a spin on it while any opinion piece they post is complete crap. 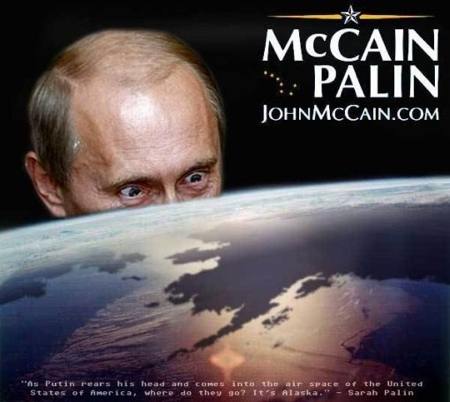 -please note: this isn't intended to be a presidential politics posted picture. I'm only posting it because it closely illustrates the way I view Putin and Russia in general and it's hilarious to boot!-

posted on Oct, 10 2008 @ 01:42 PM
link
Burdman, Propaganda, hardly likely is it or do you believe everything is OK in the US and there is nothing wrong seeing other peoples perspective of what is happening to America. And has the bubble burst or not, the lazy hazy days of slobbing around in those cheap running SUV's are over. Time to wake up and smell the coffee as you Yanks like to say, Its time to join the real World and not some self induced dream like state.


(I'm not downplaying the severity of the situation, just making light of what I can right now.)

There are the poor who struggle from day to day in everything. They are still alive.

There is the middle class who struggle from day to day to make ends meet, to keep their kids in school, to keep a roof over their heads, and to sustain a "livable" lifestyle. They are still alive.

There are the rich who are still rich. They are still alive.

There are the homeless, the jobless, the single moms, the family of four, the sports figures, the politicians, the moguls. They are still alive.

The whole of the above make up the American way of life. They are still there, and they aren't anywhere near dead.

Sure, there will be cutbacks in people's lives....but, that doesn't indicate death.

posted on Oct, 10 2008 @ 01:47 PM
link
Attempting to live middle class, with technology is not a questionable dream, but the right of everyone, including the billions abused by our federal reserve monetary system. The world has been shafted, as certain individuals contain most of the world's wealth, the Rothschild's apparently 1/3 to 1/2 off all the world's wealth in one family, according to which source you believe. Everyone in every country has been trapped in this insanity, some brainwashed into thinking its not the system but the fault of the poor, though many see through it. But our landfills and filled with coffee machines that leak and die several times a year, and all kinds of faulty goods that only a generation ago lasted for countless years, when corporations still took pride in quality, and the price was modest in comparison to the average wage as well. And we are told the fault of the landfills belongs to us, not the corporations and their degraded items made to last like the degraded lightbulb, and all their packagings, in a market that is highly controlled, and very few farmers markets or year round grass roots free enterprises to buy a booth at.

The fault isn't in the dream of living decently, but in the system that forces slaughter of humans, and the degradation of the planet for the profit of a few old men and their offspring.
We need to drive the message home that we will redesign our own communities, a moneyless resource community. We don't need to buy into Project Venus with its large price tag. If many people step out together, who have lost homes and jobs, and pool their tools, they can build their own cob villages and solar cells and windmills, and they can be connected and develop the future for all life on earth. Its time to so no to this system of winners and losers, because in it, we all lose, and a couple ugly twisted old men hold the worlds purse, men who are so jaded that it takes the blood of innocence to turn them on.

posted on Oct, 10 2008 @ 01:49 PM
link
Pravda actually has a point - for too long we have lived in a throwaway society, spoilt like children with over-indulgent parents, naively believing that it would last forever.

I have been waiting for the bubble to burst for some time.

A result of this is that I never took anything for granted.

Too many believe the world owes them a living.

Too many believe that the good times last forever.

Too many forgot to make hay while the sun shone.

And too damn many of us are too selfish for our own good.

posted on Oct, 10 2008 @ 01:52 PM
link
The throwaway society didn't exist a short time ago, and my grandmother still is using some of her appliances bought decades ago that lasted. This is what we have been forced to accept, to line the pockets a few ugly twisted jerks, but the landfills fill and fill....

posted on Oct, 10 2008 @ 02:03 PM
link
Budski, a star for you, yes you hit the nail on the head, we the people are to blame because we allowed the perps to hoodwink us. Just like the Native indians, who were bought off with trinkets and promises of a better life and we all know what happened to them dont we. The simple fact of the matter is that we sold our soul's to the devil and now we are reaping the whirlwind.

But even now just on this thread you can see that attitude of its a ruskie propaganda paper so take no notice of it. Even now with the house on fire some are still amid the flames, complacent to the end.

posted on Oct, 10 2008 @ 02:08 PM
link
We the people are cogs in a machine that was set up against us long ago. We could debate that one for hours, but I'd rather not. The natives were never bought off by trinkets. You don't understand that at all. The natives were depopulated via small pocks and outnumbered. Many were forced into land deals, many did not sign those papers. Any trinkets accepted, were just grabbing what they could when they had already had everything stolen, and the natives do not consider themselves to be a part of our corporate nations or states either. They wait until we self destruct. Though if we join them in a better way, they may one day, welcome us as their brothers and sisters.


Thanks budski you understood the Op very well a star for you, regretfully the blind patriots out there still are holding to the last string of a long gone era when our nation use to be the queen of the world.

Is long gone people, get it long gone, the brightest start of the world is indebted to it' teeth and living on borrowed money along with indebted citizens living beyond their means.

Our wages has been downgraded our wealth builders outsource and our system of government that was an example for the world is now run by corrupted politicians and greed.

Yes Russia had plenty of skeletons in its closet but guess what people America's closets are getting as crowded.

posted on Oct, 10 2008 @ 02:10 PM
link
Considering the source, Im not surprised that Prvada has returned to its roots; That is shameless propaganda.

America down and out? Hardly.

While the current mentality of deficit spending has got to end, its hardly the end of the country, and nor do I expect bread lines and the like anytime soon.

posted on Oct, 10 2008 @ 02:10 PM
link
Much like the long lost prodigal son returning to his fathers home. They are the keepers of the knowledge.

It speaks poorly for our society and industrial goals, the quality of the trash being manufacturered.

People: shop garage-sales! It's amazing what people don't know they have.

Blenders that don't burn out or break after two years, rugged shortwave radios, appliances and utensils make of quality steel.... things of by-gone generations, not to be found in the stores of today.

To the OP: Really, Pravda? Although I do admire how they can turn an evocative phrase sometimes. "A beheaded corpse, still stumbling around"? What, did they learn that one during the 90's?