Thousands of Americans Say We Should Allow Attackers to Kill Us Rather Than Defend Ourselves.

Like most sane people, he likely thought that carrying it would get the rest to give him a wide berth. Most folks aren't eager to find out how serious someone is when they walk around open carrying. They simply respect the message.

originally posted by: incoserv
I was going to say that they'd all change their opinion if they were personally under attack; but as i thought about it it occurred to me that for many of them the self-preservation instinct has probably been destroyed along with all of the other mental Illness and sick psychological manipulation that they have subjected themselves to.
:

The bright side in this mentality is that if it ever came right down to it ... they likely won't do much to fight back. The ReeeeEEEEEEeeeeeeEEEEEE might burst some eardrums, but better free and deaf than living in a tyranny.

Kyle Rittenhouse was confirmed by a Kenosha Wisconsin jury to have killed his attackers in self-defense. He was attempting to stop the attackers from killing him, and succeeded.

Any sane person would applaud this jury's decision/verdict, because it gives every American the right to defend ourselves and our families, without fear of legal repercussions.

However, there were thousands of people upset over the legal system saying its OK for us to defend ourselves. One of those individuals was the President of the United States himself, Joseph Robinette Biden.


"While the verdict in Kenosha leaves many Americans feeling angry and concerned, myself included, we must acknowledge that the jury has spoken," Biden said.

After President Biden expressed his "anger", cities across America lit up with violence and looting, committed by Democrat followers/supporters of Joe Biden.

I'm sure they are just a minority of the population. Yet its still hard to fathom that any living human would advocate for letting attackers have their way, instead of the person being attacked using whatever force is necessary, to stop the attacker.

These protestors (including President Biden) must be willing to lay down their own life, rather than personally defend it, if attacked? After all, their beliefs and principles must apply personally, or they're totally meaningless.


I maintain the position that these so-called Democrat protesters are merely hoodlum delinquents hiding behind a social justice banner to indulge their uncivilized impulses because it's a convenient cover and they are opportunist jackasses. For the record there are tens of thousands of Democrats who are conducting their daily business calmly and politely as society should.


I know that, but do ALL of the protestors know that?


What I was saying is that they probably don't. He shot 3 white guys, and 2 of them died, but there are probably protestors who are angry about him killing 3 black men.


This↓ was posted 2 days ago in this thread: Rittenhouse Not Guilty


originally posted by: Sublimecraft
Brainwashed uneducated fed-by-media-lies blue check mark dickhead....this is what patriots and freedom loving individuals are up against.....(the below tweet is dated TODAY) 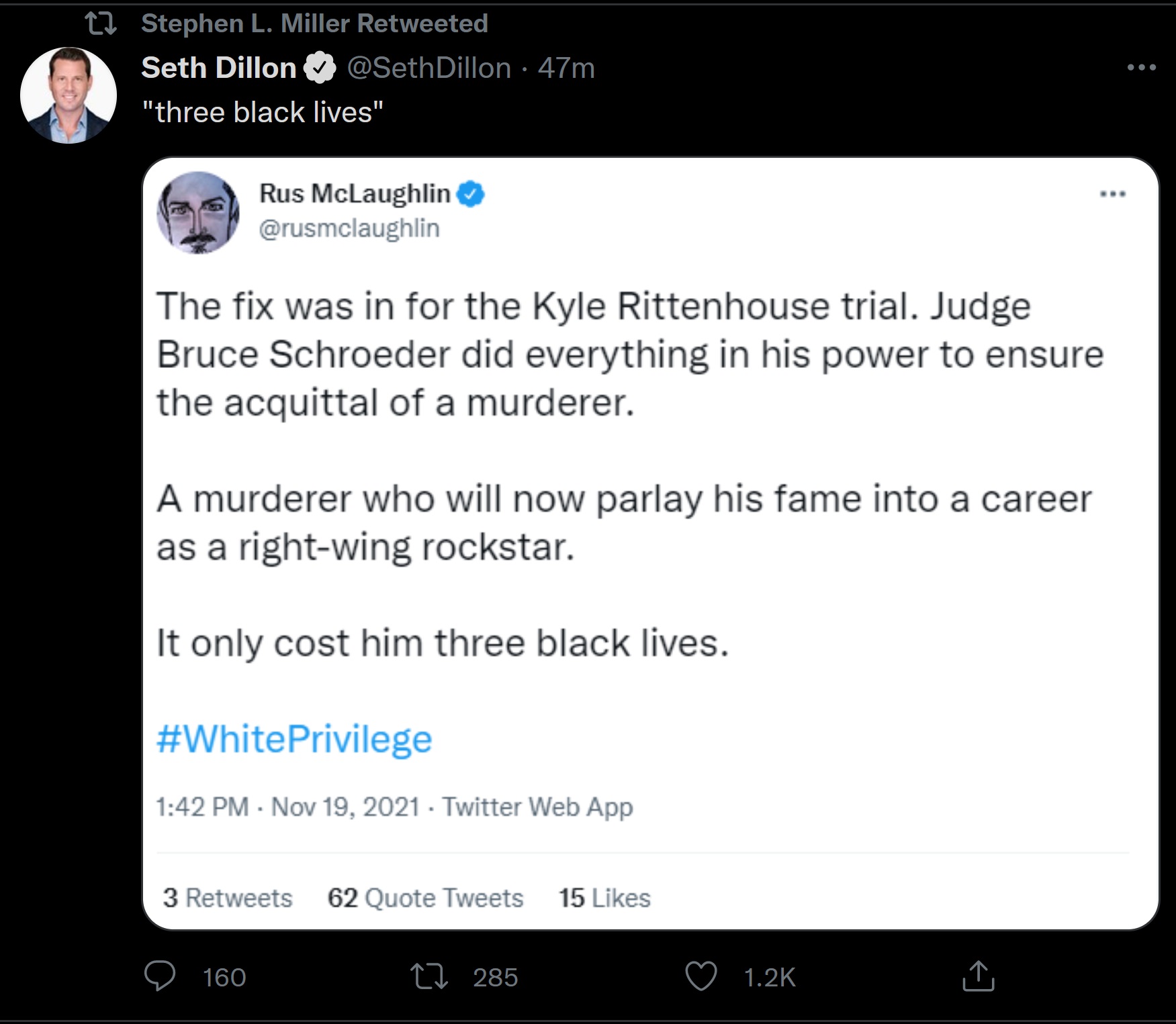 
...and Rus McLaughlin probably isn't the only fool who believes that. Some people aren't too concerned with facts. They just want something to be angry about.

I believe Stalin coined the best term for them - useful idiots. I could very well be wrong on that because I didn't look it up, but as soon as the revolution happens, they'll be lined up along the wall because they've outlived their usefulness.

At least I am being consistent with what I am saying.... and what i am saying is being aimed at both sides of the coin..


originally posted by: Smigg
The Kyle Rittenhouse trial, the subsequent rhetoric coming from the White House and the MSM is to any normal well adjusted American more proof your country is under attack from within.

56% of Americans feel Joe Biden is being controlled by "some" authority that doesn't have our best interest at heart. But nobody knows what to do about it, and THE MAJORITY of our Congress and Supreme Court, are either AFRAID, or COMPLICIT.

Knowing it is one thing.

Proving it is another.

It appears the closest credible source is the New York Times who used the expression in regard to socialist Democrats in the Italian 1948 election. An accurate label regardless.

Politics should by default be above partisan because only a simple minded fool persists in categorizing society according to binary parameters. Any intelligent observer knows you need a minimum of 9 classes to effectively organize a nation into their respective ideographics. 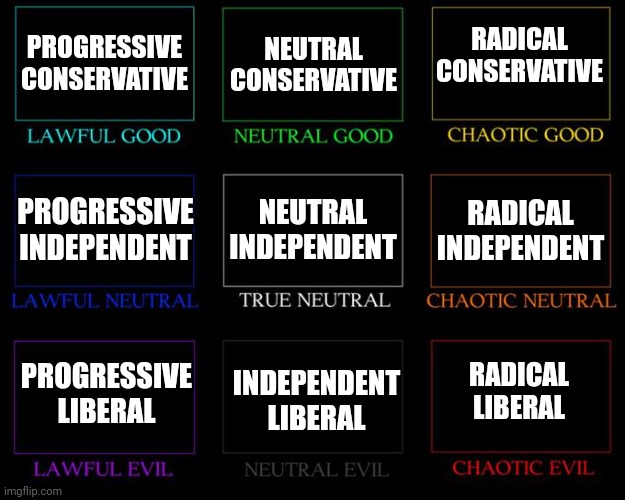 A rough sketch of how to more accurately quantify partisan psychology. It's a work in progress.


Matthew 5:39 39 But I tell you, do not resist an evil person. If anyone slaps you on the right cheek, turn to them the other cheek also.

Luke 6:29 29 If someone slaps you on one cheek, turn to them the other also. If someone takes your coat, do not withhold your shirt from them.

Ok thanks for that, my bad.

IMO, there are shades of the Russian Revolution in those who call for tearing down the American Justice system and similar sentiments. The Communists of the 21 century are happy for civil unrest and mobs to account for political opposition or anybody in their way. Otherwise, they aim to use the likes of James Comey to do their bidding. Seen alongside the efforts to defund law enforcement, propaganda efforts (including the fake Trump - Russia dossier), and the refusal for elements of the population to accept the outcome of presidential elections, the U.S. is reaching a breaking point.

Outside of his infrastructure package and the AUKUS agreement, Biden is the puppet of various 'corporate' and other special interest groups. In that sense, he resembles presidents Pierce and Buchanan, who, as hostages of the southern slave owners, did nothing to prevent their country from sliding into the [American] Civil War.

originally posted by: dawnstar
He shouldn't have been there. He could have avoided the whole experience if he had just stayed home. Something some of those he shot I don't think has that option.


They didn't have the option of staying home instead of engaging in rioting?

Oh - and are you absolutely sure that all of the ones that were shot lived there? Honest question, I actually don't know... but even if they lived there that doesn't make it ok for them to riot and burn.

I di agree with one thing you said though... it would be hard to tell a good kid running down the street with a gun from a bad kid, especially if a bunch of radical ass hats are lying about may or may not have happened.

Every time a Liberal is losing an argument they bring up Trump or Charlottesville. You have ONE instance, compared to how many incidents from BLM and Antifa? Don't give me the 'not everybody was doing it" bit. If you aren't calling them out or stopping them, you bear part of the blame.
I wonder how fast Waukesha is going to disappear since it doesn't fit the agenda.

Good thing we each have a personal veto to their nonsense.

Simply ignore those idiots and follow the law as written. You can’t go wrong!

Be a good, sober, sane and moral person. Make good decisions! And if someone insists on visiting violence upon your person, then shame on them.

Most places in the country have very rational self defense laws. Others are half baked or corrupted by Soros-DAs. Fortunately, our jury system acts as a final barrier of defense against the mob. But removing these zealot Prosecutors is another way to move forward. Alternatively, pull out of the area/state all together and relocate somewhere rational vs emotional

So when rioters laugh at your idea and good, moral people listen to it….and the government won’t act….who is supposed to stand up for those Citizens?

Themselves. Of course. But the mob often outnumbers the good guys. Yeah, we have better technology and training usually. But that only makes up for so much.

Rioters need to expect to be confronted and quelled rapidly. That will put an end to their BS. Let’s face it, protests do nothing but stir up BS. As soon as it’s over, everyone left is no longer just an activist. They are criminals. Rioters. Looters and arsonists.

It is ironic that many who profess anarchism are opposed to a superior force eliminating an inferior force (skills, tech, kit, whichever…is what I mean by superior). Everyone wants to defund the police until they are the ones staring down the barrel of a gun

Someone will always enforce the law and stand up for those unable to defend themselves. If you kneecap LEOs, as shown common Citizens will rise to the challenge and engage with deadly force if cornered.


Rioters need to expect to be confronted and quelled rapidly. That will put an end to their BS.

They need to be put down hard immediately. The problem is not many people are willing or able to do it.

Those of us that are lucky enough to be able to handle this are usually accompanied by someone that knows what we're capable of and who will whisk us away from situations like that in order to prevent spending large sums of money on bail.

She hates waiting for the court process to play out so that she can get her $$ back. I don't blame her.

Everybody keeps harping on Militias, but, nobody mentions Posses. We have a volunteer Posse in my area. When the Sheriff activates it, we are covered for SOME things and have the power of arrest.

originally posted by: carewemust
Any sane person would applaud this jury's decision/verdict, because it gives every American the right to defend ourselves.

Make sure you watch every person who says you shouldn't have the right to defend yourself. Who knows what else they are doing? And they obviously think your life is worth nothing.