originally posted by: DAVG1980
a reply to: drinkbeker

This site is like no other, and if your clever, and you study who's who, it's easy to find the agenda

All innocent until its their turn to disinform


Don't forget the sockpuppets, rogue actors and the mountebanks.
“The god of this age has blinded the minds of the unbelievers.” Corithians 4:4

posted on Nov, 18 2021 @ 01:06 PM
link
This guy here is one of the biggest offenders in the troll
farming. David Brock, pet of none other than Hillary Clinton.

No doubt, he played his part in farming out trolls on this
site about the so called "dossier", Russia collusion, and
et al. Last I read he was under investigation.

Perhaps that is why some folks just disappeared eh?

Sure, in the grand scheme of things it is certainly possible that various persons, either government, government contractors, or directed by a corporate entity, may be tasked with attempting to influence opinion on AboveTopSecret.com. My reaction...

Seriously. It may be downright impossible to discern the different between:
1) a "shill" sent to spread disnfo
2) an ordinary person who doesn't accept most conspiracies
3) someone fooled by mainstream media
4) someone passionate about a manufactured political ideology
5) someone who is afraid to consider conspiracies
And since it's impossible to discern the difference in an environment like ATS, why get worked up over it?

The reality is that those you think may be a shill are numbers 2-5, and actual "shills" in the severe minority (if at all). So the best strategy is not to sweat the motives and treat them as you would any person who simply disagrees -- state your case with authority, excellent back-up, well-composed responses, and polite compassion. You may not change their opinion, but the nature of your response may change the opinion of the thousands of other people likely to read your response, but who never considered joining ATS.

Want to add this to the thread, as this may be one of the
largest ever campaigns found. Two Iranians who were
posing as Proud Boys and making threats to vote for
a certain candidate, trolling on Facebook and emailing
tens of thousands of people. DOJ announced today they
have charged them, but good luck catching them.

Of course, they were neither Proud Boys, nor Trump supporters.
Was the event was used as intended by some entity within the U.S.
interfering with a U.S. election?

Well rest assured the DOJ is on it.


Thanks as always for bringing much needed discussions
for enlightenment.


Have to admit I'm a bit fascinated by the psychology of it all mate and do wonder what kind of person actually takes time out of his or her day to solely antagonize other people online (other than those who are getting officially paid for it).

Suppose they might get some kind of peverse kick out of it and thought this chap also made some relevant comments about trolls attempting to disrupt research into missing people.

You mods often warn of the dangers of the "Digital Ego"


I'm no moderator mate and hopefully don't take myself too seriously.

Think one of the main things that pisses me off (and one of the main goals of Gov shills) is that they actively try to deter newcomers from engaging in present and future research.

Am all for 'free enquiry' (think it's insanely important to a healthy and functioning society) and have lost count of how many times sincere and thoughtful folks have come online sharing great insight and research into 'controversial' topics only to be scared off by malicious trolls.

Pretty sad state of affairs when a person realises that a great many of the more disturbing 'conspiracy theories' have turned out to be 'true' and have absolute basis in objective reality.

I've given this some thought.


So have I mate and got to love Mike Tyson's quote below regarding trolls saying things online which, in real life, would warrant them a punch in the face - suppose you also get the passive aggressive types who never address posted content and always try to make it about you. 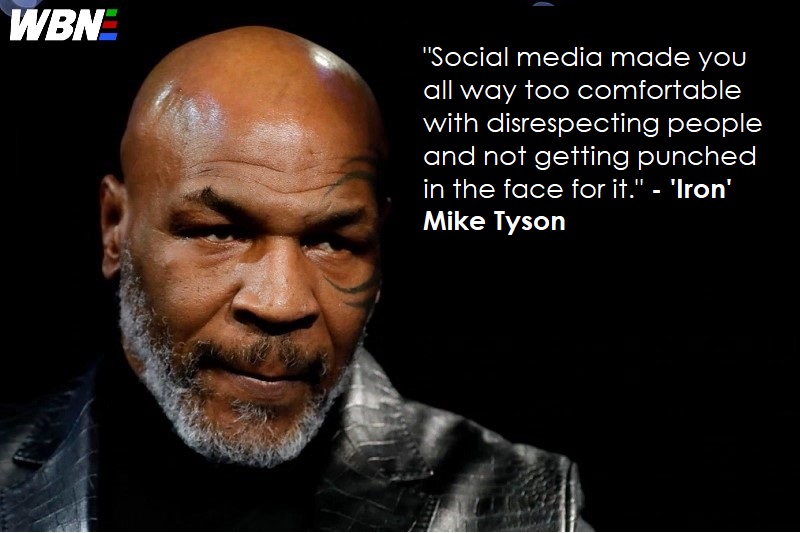 As the link states in the first post 'the worst trolls are the government trolls' and their antics have now become so prevalent that it's magically warranted some kind of Hegelian dialectic where the resulting law and government oversight will potentially result in complete abuse of power and the illegality of free enquiry.. who saw that coming then?

Any thoughts on the actual thread content and the US/UK Gov training their employees in 'the building blocks of deception' - what do you think about the abuse potential for this new law or the mindboggling fact that propaganda is now legal to disseminate to domestic audiences?


Any thoughts on the actual thread content and the US/UK Gov training their employees in 'the building blocks of deception' - what do you think about the abuse potential for this new law or the mindboggling fact that propaganda is now legal to disseminate to domestic audiences?

First you have to ask yourself when hasn't government used propoganda and outright lies?

Gutenberg and his printing press just made it easier and made obsolete the town cryer.

Thanks for the relevant addition there matey - thought there was some interesting commentary below about (abuses of) the new online harm bill.