This is the DATA, And this is alarming 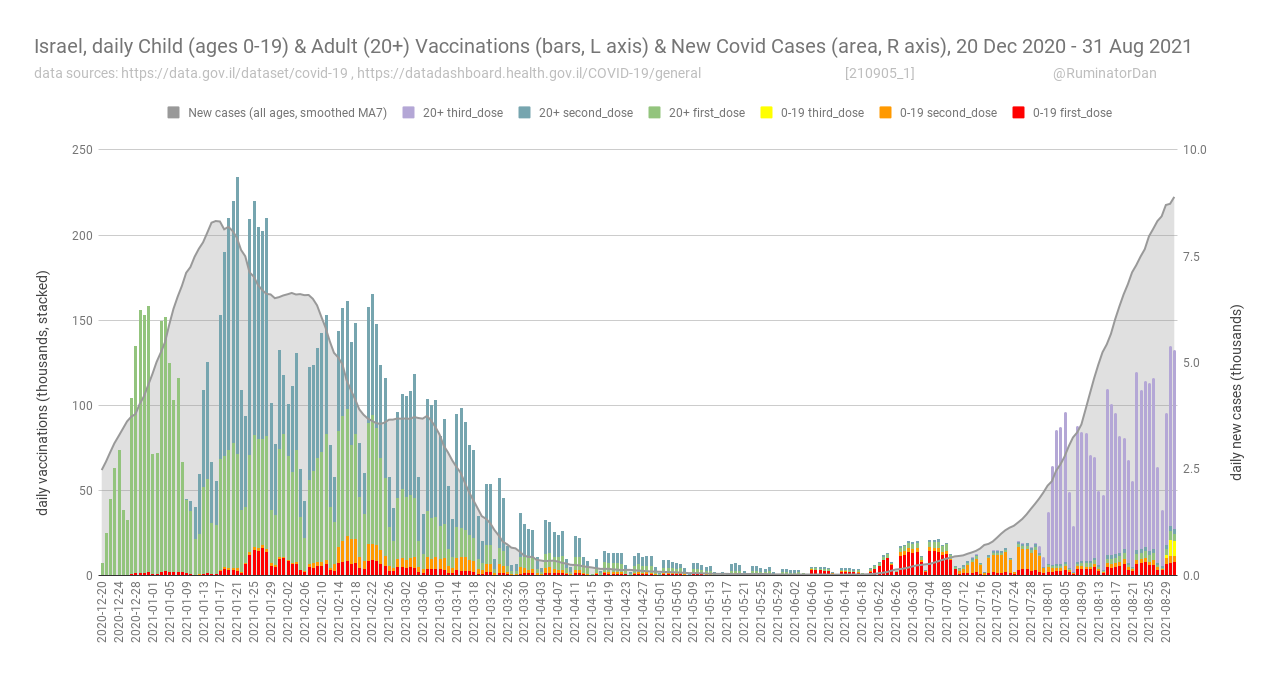 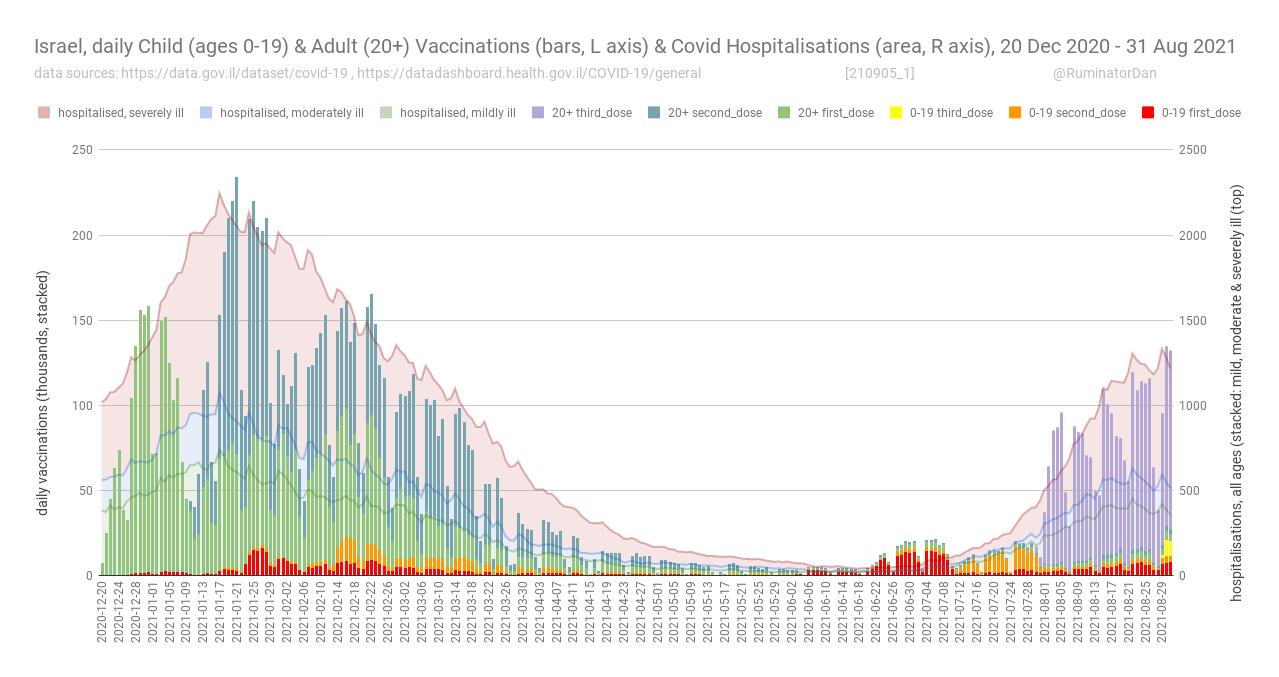 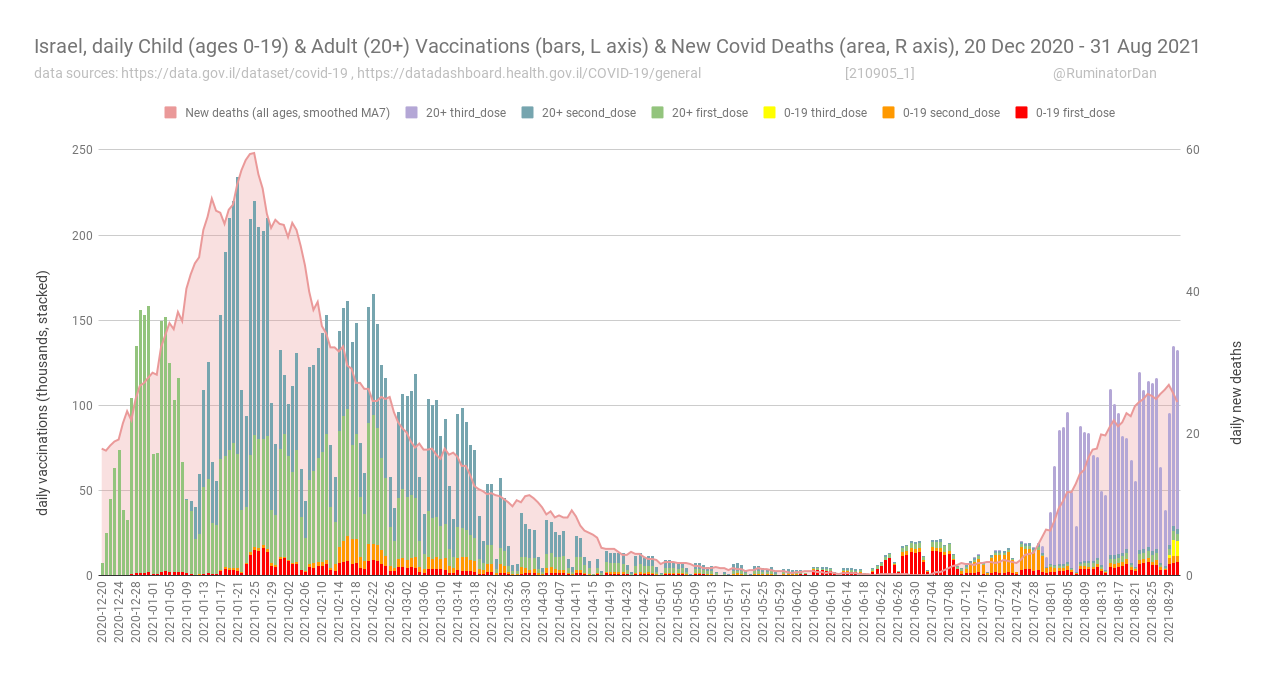 
Sure reads like the vaccines are causing the waves, the variants, cases & deaths

Either that... or they're vaccinating during waves variants cases and deaths

The narrative has subtly changed from the ‘vax will protect you’ to, ‘the unvaxxed are making the vaxxed sick’.

It is a small but profound change not rooted in logic or science. The end result will be frightening.

To the untrained eye, that sure looks to me like the 3rd vax has something to do with the surge.

Have they gone too far?

I have family that got the first 2 shots and are now questioning getting a booster because of the stuff they are seeing from "the experts" not lining up with what they were originally told.

This will be some interesting times ahead if us.
edit on 9/6/21 by Vasa Croe because: (no reason given)

The source of the graphs are the Twitter handle per their tweet...any more details about the source?

originally posted by: game over man
a reply to: TritonTaranis

The source of the graphs are the Twitter handle per their tweet...any more details about the source?

Did you looks at the graphs? They list the sources at the top of each one.

originally posted by: Flyingclaydisk
That is kind of spooky!

To the untrained eye, that sure looks to me like the 3rd vax has something to do with the surge.

Have they gone too far?

That is not all 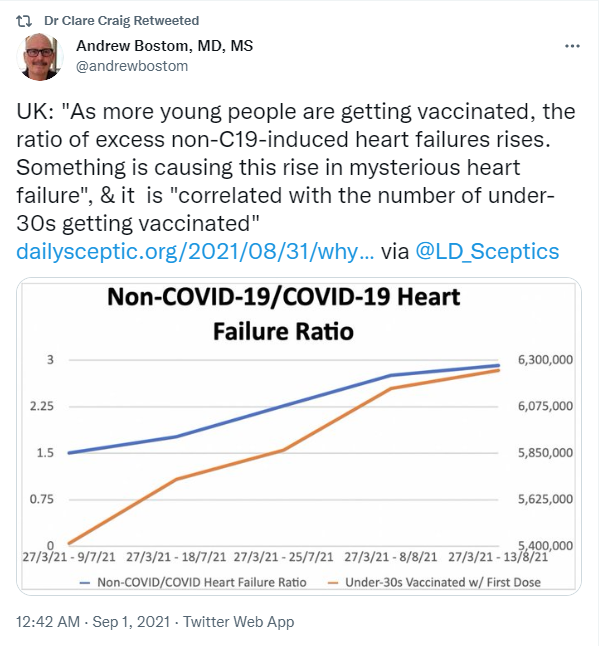 That Vaccine is undoubtedly killing people
edit on 6-9-2021 by TritonTaranis because: (no reason given)


themessengernevermatters
+3 more
posted on Sep, 6 2021 @ 10:54 AM
link
If the vaccinated can become asymptomatic super spreaders like Mary Mallon; Typhoid Mary, then the vaccinations would accelerate the spread of the virus. Asymptomatic spreaders, don't feel sick, don't self isolate and continue to spread the disease.

Slightly off-topic, but sort of on.

Looking at these graphs, I kept thinking, correlation is not causation lol! If I were to not consider it, it would almost appear that the vaccinations themselves are creating more Covid cases.

No doubt that they would be they blaming it on the covid and not the vaxs but they arent going to be able to cover up forever.

No doubt that they would be they blaming it on the covid and not the vaxs but they arent going to be able to cover up forever.

That is why they're constantly shifting the goalposts bud

The games already up, It was a long time ago tbh, but they think they can just keep changing the game and then the rules, and the low IQ sheep follow, but it looks like less and less sheep are following each game and rule change

I'm just looking forward to their excuse and reasoning, and watching others slowly back-peddle their support for none-scientific totalitarian medical fascism

originally posted by: TritonTaranis
* These are charts of data, not models.
* Data shown are either raw (as downloaded) or calculated simply from the raw data.
* Data are from official sources, as shown on charts.


Sure reads like the vaccines are causing the waves, the variants, cases & deaths

Either that... or they're vaccinating during waves variants cases and deaths

The narrative has subtly changed from the ‘vax will protect you’ to, ‘the unvaxxed are making the vaxxed sick’.

It is a small but profound change not rooted in logic or science. The end result will be frightening.

And yes, they are currently vaccinating during a wave, with variants, cases, and deaths occurring, just as they did last winter. Do you find that mystifying?

Its only matter of time before it crashes down and people get angrier.

It's beginning. The mainstream media is actually criticizing the Biden administration. I think the Afghanistan debacle pushed them over the edge. Now the illusion they were convincing themselves of is gone.

marg6043
+3 more
posted on Sep, 6 2021 @ 12:56 PM
link
I will seat my unvaccinated latino butt, on the side lines as I have been doing, with no mask with my bucket of popcorn and enjoy the results of a hastily, premature delivery of an untested jab in humans as time goes by.

I will see how pharma in his greed for profits, kills, maimed and render billions of people immune systems useless.

I will see how pharma in his greed creates a new assortment of treatments for those that will need it from side effects of this pushed technology.

Meanwhile I will remind unvaxed, free and living life. Sadly the damage is done
edit on 6-9-2021 by marg6043 because: (no reason given)

This is where I get stuck:

"The unvaccinated are killing people"

No, the side effects of the virus are killing people, as well as a myriad of other complications.
edit on 6-9-2021 by DreadKnock because: Reasonably and Politely Corrected by Another Member

posted on Sep, 6 2021 @ 01:16 PM
link
It gets even more interesting when we look at the graphs in countries worldwide, when tied into vaccination program dates.

Correlation doesnt necessarily equate to causation though, and thats important.

The most "benign" explanation is that the vaccines are not nearly as effective as marketed (shocker). They may reduce the severity of symptoms in some patients, which is a good thing on its own. However, they may not prevent infection or transmission to any greatly meaningful degree.

So, what would happen is that people would get the jab, think they are super duper immortal and stuff, and then their behavior changes en masse to "make up for lost time" of being largely asocial for a long period of time. In this circumstance, I think we could expect to see a huge uptick in transmissable stuff across the board. Particularly when so many think the other super duper immunity inducing wizardry are items like scarves. Maybe we should also wear top hats in order to catch the virus before it falls on our heads? Monocles?

All that said, one view here is that these spikes in illness are 100% expected and predictable even if we take the jabs out of the equation entirely. They arent "good," but in a sense, it could be seen as societies collective immune system relearning how to work after nearly 2 years of behavior that does little more than compromise our ability to handle infectious diseases (among other things).

It would reach an equilibrium after some time, in an ideal scenario that actually accounts for how we know these things work. Hopefully we dont screw this process up by the presence of the jabs themselves, or falling back to the measures and approaches that got us here in the first place.
edit on 6-9-2021 by Serdgiam because: (no reason given)

This is where I get stuck:

"The unvaccinated are killing people"

No, the virus is killing people.

In every case, no matter who or what you blame, it is the virus that kills.

Ummm... no. The virus itself doesn't kill people.

The side effects of the virus - basically pneumonia or pneumonia like illness in the lungs - is what kills people.

But it only kills people who already have serious underlying conditions, even if they don't know they have them. Lack of discernable symptoms does not equal vital health. A large majority of people are slightly obese and borderline diabetic and with serious undiagnosed coronary blockages already (undiagnosed because they haven't taken any tests to confirm it because they don't have any discernable symptoms prompting them to get tested).

so, in reality, it is the poor diet/lifestyle choices of people with serious underlying conditions that causes their death.

But even the vast majority of those could be saved if so-called Doctors would actually treat them with things that work early on, rather than waiting until they are on deaths door. So, ultimately, the blood of the people who have died been sacrificed by the medical establishment in order to pursue a diabolical political agenda is on the hands of the Doctors who refused to treat people with what they had on hand.