UAP photographed from US carrier 1952

posted on May, 31 2021 @ 06:37 AM
link
The purpose of this thread is to show that despite all the noise surrounding the recent releases - tic tac, triangles etc - there are records of very similar incidents from as far back as 1952. The fact nothing has really come out of any investigations from this incident or others since for me doesn't bode well for the imminent senate report but time will tell.

Operation Mainbrace was a multi-national NATO coordinated military exercise that took place between Sept 14 - 25 that involved 85,000 personnel in total and included numerous Navy ships in the North Sea and Atlantic.

There were various reports of UFO (UAP) activity from different ships and even a jet fighter encounter - maybe the following sounds familiar.

The jet broke off its approach and circled back around. As soon as it did so, the object stopped its motion and instead, hovered and “rotated on its own axis”. It did this for several moments before suddenly “accelerating at tremendous speed” disappearing into the distance.

One of the UFO's was seen for some time from the USS Franklin D. Roosevelt - long enough to be photographed. 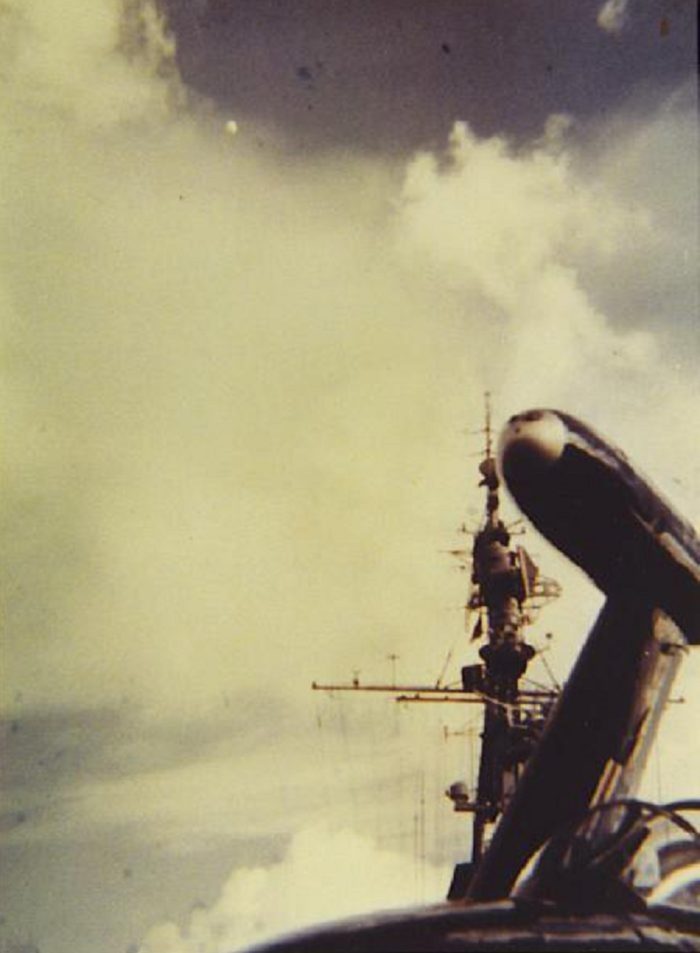 There is nothing I can really add to this report which has some useful links for further reading as does Karl 12's thread here - www.abovetopsecret.com...

I understand the case formed the basis of a PBB episode (I haven't seen it) and that there were USO aspects as well as FT's. 1952 is a bit early for drones and there seems to be only one possible prosaic explanation for the Roosevelt sighting - a balloon - but that was ruled out by Ed Ruppelt.

So if nothing else an interesting account that has many similarities with more recently reported events and, arguably, a clearer image.

I've seen one of those.

The tic tac thingamabob ticks all the same to similar boxes as the Foo Fighters reported during the second world war.

Is it that on the upper right ?

I'm not saying it's fake. It's just not clear enough to spot.

originally posted by: andy06shake
a reply to: chunder

The tic tac thingamabob ticks all the same to similar boxes as the Foo Fighters reported during the second world war.

Also, if we *were* able to confirm that either the sightings described above or the Foo Fighter incidents were very similar to TicTacs, that would then seem to rule out man-made origin of the craft (no way we'd have made material knowledge and tech back then to build such a thing).

That doesn't preclude that the TicTac is a knock-off/copy of non-terrestrial crafts from decades earlier, though. That is one thesis I haven't heard raised much: the TicTacs are man-made but are patterned off of something not of this Earth, sort of like the Alien Reproduction Vehicle.

Apparently 4 photographs were taken of the object. I wonder what happened to the other 3, as only the one posted in your thread seems available ?


Litwin quickly shot four color photos of the round object, which he assumed was a weather balloon.

posted on May, 31 2021 @ 08:30 AM
link
I'm not one of those guys that's skeptical of every picture and video, but that's just not a very convincing photo of anything in my opinion.

originally posted by: AmatuerSkyWatcher
a reply to: Trueman

Thanks. Hard to say what it could be.

posted on May, 31 2021 @ 09:28 AM
link
The photo is not overly convincing. But the link describes reports from multiple witnesses on several occasions.
If it was anything like todays recent naval sightings we can be pretty sure it wasnt made by us or from China/Russia back in 1952.

originally posted by: Mark08
I'm not one of those guys that's skeptical of every picture and video, but that's just not a very convincing photo of anything in my opinion.

What kind of picture do you want to see that will convince you of something ?

Is the picture any more or less convincing than the recent ones showing what is in all likelihood a batman balloon or a grainy IR video of a blob ?

As that was the point of the post - what we are presented with recently as leaked classified material that is hitting MSM and being accepted by the sheeple has no more verifiable data than a report from nearly 70 years ago.

To me its a fairly convincing photo of exactly what was reported as being seen - were you expecting a close up of a star destroyer ?

Good question and I've not been able to find an answer so far - though there are others that are far better than me at digging.

Intriguing though as maybe the other 3 were even clearer (not that would convince anyone of anything - nor should it) !