Taiwan was DUTCH before it was ever Chinese-ruled 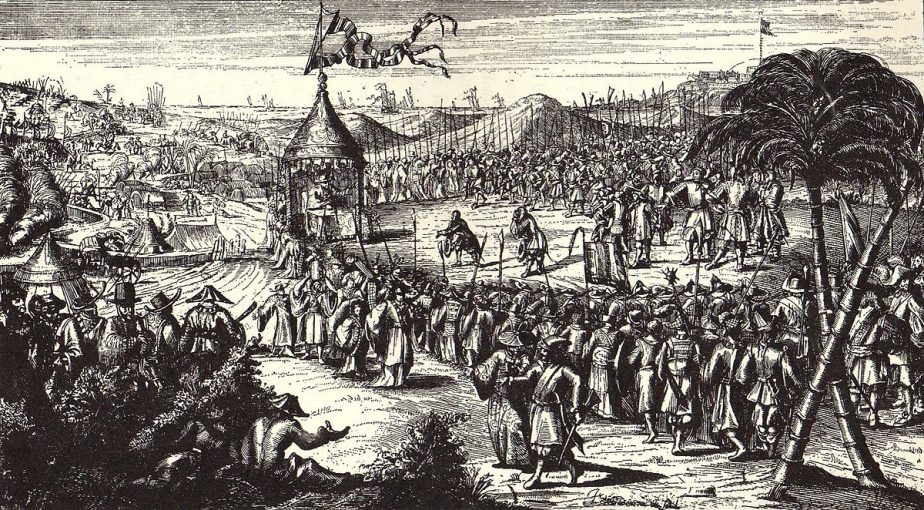 Has Taiwan Always Been Part of China?

The historical relationship is more complicated than Beijing would like to admit.

Was Taiwan Part of China During the Ming and Qing Dynasties?

But what about the PRC argument that Taiwan is a “domestic” issue and an inalienable part of China, and has been part of the country since the Ming and Qing dynasties?

When the Dutch East India Company arrived in Taiwan in 1624, they found no traces of any administration by the Ming Dynasty, which ruled China from 1368 through 1644. In fact, the Dutch – who had established a small fortress in the Pescadores in 1622 – were told by the Ming Tianqi Emperor that they should “go beyond our territory,” so the Dutch moved to what was then called Formosa, and ruled the island for 38 years, establishing the first administrative structure on Taiwan. Thus, it certainly was never part of the Ming Dynasty...

...In 1683, [after Holland had left] the Kangxi Emperor said specifically that “Taiwan is outside our empire and of no great consequence” and even offered to have the Dutch buy it back.

Before the Dutch arrived, Taiwan was populated by a small number of indigenous peoples, who were not and had never been Han Chinese. They lived a tribal lifestyle, and the island was mostly empty, certainly with no central government or claim of belonging to any particular nation.

Besides the indigenous people, there were a few crude forts in isolated coves, used as safe-havens by several marauding pirate bands from various neighboring Pacific nations. In the 1500s, the Japanese sent a group of envoys to Taiwan, hoping to establish "diplomatic relations" with the then-generally-unknown island. The envoys returned empty-handed: they had not found anyone in a position of authority, anything that could be called a nation, or any advanced settlements, cities, or towns to present themselves to.

Thus, except for the highly-undeveloped indigenous tribes, it is safe to say the Dutch were the first "settlers" of Taiwan -- the first to develop it in any semi-modern sense.

If anyone has a 'historical" claim to Taiwan, it is Holland.


1683 did indeed start a period of some 200-plus years when Taiwan was ruled – mainly indirectly as part of Fukien province – by the Manchu rulers in Beijing. But under Qing rule there were a total of more than 100 recorded rebellions, some requiring more than 50,000 troops to put down. Taiwanese historians characterize it as “Every three years an uprising, every five years a rebellion.” The population considered the Manchu very much as a foreign colonial regime; there was no appetite for being part of China.

After the Dutch left, Taiwan was occupied by some rebellious mainland Chinese, who briefly declared themselves an independent nation. China then for the first time claimed the island, but the central government had little control over it, and the people that lived there had little sense of identity with mainland China.


When Japan won the 1894-1895 Sino-Japanese war, the Qing government in Beijing agreed under Treaty of Shimonoseki that Taiwan would be ceded to Japan in perpetuity.

The next major portion of Taiwanese history saw it as a part of Japan, not China. It remained a Japanese colony until 1945, when Japan was defeated and the current Republican anti-Communist forces retreated there.

It's important to remember this history, as China seems to claim some hazy "eternal connection" with an island that never really felt part of mainland China at all.

This piece just completely ignores the Chinese trading fleets that sailed the oceans in history.

It is just a modern hit piece of supposed journalism.

Just because a news paper publishes something does not make it true.

and just because the lying CCP claim everything in the area doesn't make their claim true. china didn't even get to the island until the the late 17th century

from the Encyclopedia Britannica,


Prior to the 1600s, Taiwan was self-governing, although there was no central ruling authority. It was a colony of the Netherlands for about 40 years in the early to mid-17th century and was subsequently independent again for about two decades. China gained control there in the late 17th century and ruled Taiwan for some two centuries. Japan acquired Taiwan in 1895 following the first Sino-Japanese War, and it became a colony.

posted on Dec, 5 2020 @ 08:22 PM
link
So were those "indegenous people" of Dutch ancestry? Or did they look like Chinese? After all, all Columbus found were "indigenous people with a tribal lifestyle."

I'm willing to bet all my Christmas cookies that Taiwan is a WHOLE LOT more Chinese than it is Dutch...

True they may not be HAN, but there are other Chinese ethnic groups...


It has also been shown that not all paternal lineages observed among the populations of ISEA trace back their origin to Taiwan, but instead that TwMtA and ISEA populations find a common origin in Southeast China

Wonder why that is?

History is written by the *winner* making it mostly anecdotal (previous to modern forms of archival data I.e. video/photos )

No, Taiwan was not Dutch, ever.

European colonialism should stop be glorified as if they were 'bringing' some sort of civilization to savages and jiggerish like that. That area of the world was known to Rome! Rome knew of China, and China knew of Rome. You honestly think the warring provinces of ancient China, Korea, Japan, etc didn't conquer the Taiwan region long before some random Dutch explorers landed their and wrote about it?

originally posted by: strongfp
a reply to: Never Despise

No, Taiwan was not Dutch, ever.

European colonialism should stop be glorified as if they were 'bringing' some sort of civilization to savages and jiggerish like that. That area of the world was known to Rome! Rome knew of China, and China knew of Rome. You honestly think the warring provinces of ancient China, Korea, Japan, etc didn't conquer the Taiwan region long before some random Dutch explorers landed their and wrote about it?

posted on Dec, 6 2020 @ 01:16 AM
link
DNA seems to point that the Taiwanese aborigines are the root for many island nations and not from China a reply to: schuyler

Go right on denying the known written historical record then.

originally posted by: BlackOops
DNA seems to point that the Taiwanese aborigines are the root for many island nations and not from China a reply to: schuyler

Obviously this history of Dutch contact hardly amounts to a valid claim for modern ownership. That, indeed, would be journalistic hype. But it does highlight the way that Chinese claims to authority are based on "We used to own it, so we should have it back", rather than purely ethnic arguments.

Incidentally, I believe the old European-given name "Formosa" is actually Portuguese in origin.
edit on 6-12-2020 by DISRAELI because: (no reason given)

Islands seem like the most unusual place to be the start and root of other nations .
How did they get there ?
Possibly from China ?

posted on Dec, 6 2020 @ 07:25 AM
link
a reply to: Gothmog
If they migrated from the Chinese mainland, it does not follow that they are related to modern Chinese. They could, for example, have been "pushed out" by people migrating or expanding from the interior. The English are not entirely descended from the French. There were Indian tribes on the nineteenth century American plains whose ancestors lived in New England, but that did not make them Yankees.

Yeah, and before the Dutch rolled up, they were governed by the Indigenous Austronesian tribes that are technically closely related to the Polynesian and South Asian Islands indigenous (such as native Filipino tribes)

Basically, everyone that's set foot on it has BTDT regarding settling & controlling Taiwan. The Dutch were not special in that aspect at all.

It doesn't matter who used to run Taiwan. What matters is who lives there now. The Taiwanese, or the Republic of China run things now. Or do they?

Seems they haven't actually declared independence from China. The Taiwanese or Chinese Republicans were only assuming the administrative role on Taiwan.

So does that make it Chinese? Japanese? A UN designated peace zone? American? Dutch???

I don't know, what I do know is the vast majority of Taiwanese people are not Dutch descendants. I don't like China but I wouldn't downplay the ethnicity or origins of the 'Taiwanese' seemingly though the government of Taiwan does...

Which is interesting of itself, a wise man once told me to stay out of domestic disputes. Especially the ones that don't concern you.

From a European point of view? There was an entire society living there, with towns, villages, and pottery, evidence of armies and large settlements.

The Dutch just colonized it, and did what colonialists do, exploit the hell out of everything.