Would this corona epidemic period be a good time for alien disclosure?

posted on Mar, 24 2020 @ 08:35 AM
link
During the current Corona virus crisis, a lot of people are working from home/in self isolation.
Many have bought supplies/prepping material (toilet paper in particular..)

posted on Mar, 24 2020 @ 08:40 AM
link
a reply to: tjocksteffe
i like the idea and yes it seems a nice time to do it
but i think they would be trying to do too much at the same time
this virus needs their attention
but more than happy for them to disclose when they want
sooner rather than later would be nice

Yes, it's also a good time to tell people we also live in a simulated reality, there's a giant asteroid hurtling towards earth and that Johnson and Johnson has decided to permanently stop producing toilet paper.

We could shift the blame to those pesky little E.T. critters


As a side note, I don't recall her name but a UK politician got herself fired for declaring 9/11 as "a good day to bury bad news" . So it wouldn't surprise me this virus will be used by many for a variety of non-health issues.

originally posted by: tjocksteffe
Wouldnt the current situation be good for disclosing information regarding an alien prescence on Earth?

People who ask for disclosure seem to think that alien presence is the only acceptable thing to disclose (even if it's not true).

I made a thread explaining how it looks like the UK already had disclosure, but nobody paid any attention because it wasn't the aliens answer they were looking for (not that it rules out aliens either, but it might be a true disclosure. Or not):

originally posted by: UltimaRatio1
No. People would blame the aliens for the virus. Not a good start!

It has happened previously, look at reports around the time of the Black Death. Many reports stated that "lights in the sky" along with a "mist" were present prior to a outbreak, also the way it moved through Europe is said to be far to fast for the time period. Well worth a look down the rabbit hole if you have a spare afternoon.

We will get disclosure when the hierachy see fit to tell us and to thus gain from it. I will not hold my breath of any official discloure anytime soon, there are far to many issues that would arise from it. Imagine if it was known that Governments had known of their existance for decades/Millenia and we had not heard a official peep, the possible technology exchange that could of helped Billions.

Not to mention it is a great cover story for any number of black budget programs.

I think we would need a near world ending event and that disclosure would somehow limit the disruption for it to be made publically known to ever see light of day. They have everything to lose and very little to gain from what I see.


That is if there is a disclosure to be made in the first place?.

I suspect the response may be...

B) Non-believers. "I still don't believe".

Nice idea but I also suspect these or similar responses, whatever the timing may be.

What if the virus actually IS the alien searching for suitable hosts and only killing those that are not suitable?

People don´t want disclosure of any kind. They want saviors! 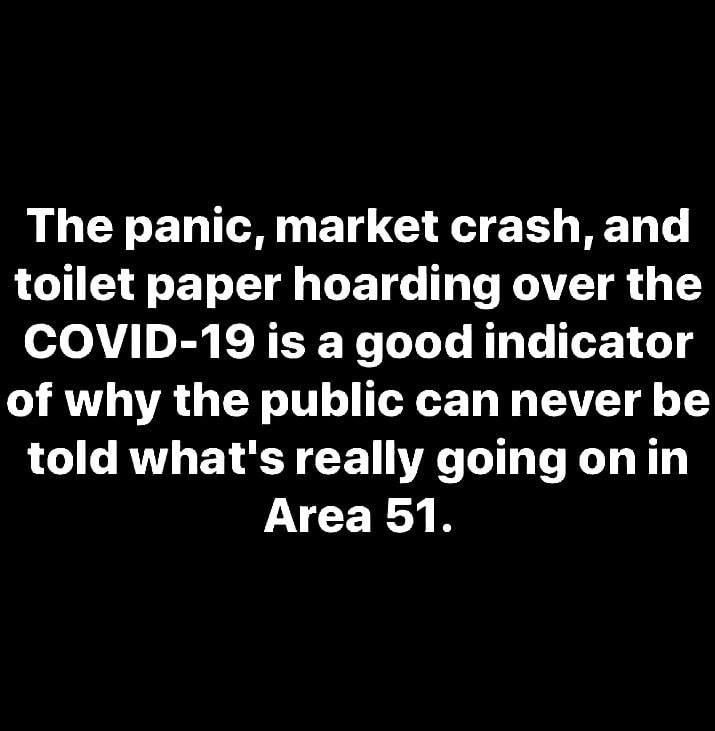 No. They make viruses.

posted on Mar, 24 2020 @ 01:02 PM
link
Maybe, because there are less chances of riots with a pandemic. That's assuming that the government will ever disclose.

haaahaaa and a pretty sophisticated ones too, has to do with automated probing

The "aliens" have already shown themselves to you with their coronavirus hoax.

You don't have the eyes to see or the ears to hear.

originally posted by: tjocksteffe
During the current Corona virus crisis, a lot of people are working from home/in self isolation.
Many have bought supplies/prepping material (toilet paper in particular..)


I think those in control want to keep everyone as pacified and calm as possible. Piggybacking disclosure onto a pandemic seems too much of a gamble, in terms of pushing the public 'over the edge'.

I can just imagine the WH pressers though....