CNN just published an analysis of how the Electoral College map would look, the day before this year's November 3rd Presidential Election.

The map allots 260 electoral votes to Trump, 248 to Sanders and puts 30 in the pure toss-up category.

"In our view, we think a Sanders nomination would tilt the election more toward Trump, to the point where the ratings would reflect him as a favorite," writes Kyle Kondik and J. Miles Coleman of the map.

Since CNN and their "analysis and polling partners" are all heavily biased towards favoring Democrats, it's quite extraordinary for them to give Republican President Donald Trump the better odds of winning, this many months in advance.

And, since they gave Donald Trump less than a 10% chance of winning the Presidency in 2016, it's realistic to assume that the "slight edge" they're giving Trump over Sanders, will actually be a LANDSLIDE re-election victory for President Donald J. Trump.

No wonder Democrat Mega-Donors and level-headed Democrats are in a panic right now!

IMO, CNN is publishing this prediction early as a "WARNING!" to Democrat Party Leaders that they had better find a way to get Joe Biden the nomination. In every "Trump vs Biden" poll, dating all the way back to last May, Biden always wins.

If Bernie becomes their candidate, democrats will vote for Trump.

I want to see that happening. 😂👍


The New York Times interviewed 93 Democratic superdelegates, 84 of which said Sen. Bernie Sanders should NOT become the nominee based solely on winning most, but not over 50%, of primary and caucus delegates.

“If 60% is not with Bernie Sanders, I think that says something, I really do,” Democratic Rep. Veronica Escobar of Texas told The Times.

posted on Feb, 28 2020 @ 02:55 AM
link
Makes sense to me since it is mostly young people without jobs that pay that much who want Bernie Sanders 27% tax hike for all to pay for all the so called free government spending on health care and colleges. I'm not that young anymore and don't really understand why you would want he government to take 27% more of every paycheck in the hope that you get free stuff back. I'd rather keep my pay and go to a less expensive college. Maybe economics 100 or a basic course in capitalism for high schools should be enacted.

Maybe teach basic finances too. Like you get ahead by saving money before you go out and buy thousands of dollars of stuff you don't need via credit cards which makes you pay interest for years if you don't have the money. The government is not free. People pay a lot to support it. The younger you are, the more you will pay when governments spend too much.

I believe young people ignore or don't care about 27% tax hikes to pay for all Bernie Sandees free stuff. Maybe Trump could say if you want to give up over a million dollars of your pay to the government over you lifetime to get something supposedly for free, then I can't help you. I'd rather people keep their money and spend it how they want. Economic studies I read indicate Sanders plans would need 27% tax hikes on everyone.
edit on 28/2/20 by orionthehunter because: (no reason given)

posted on Feb, 28 2020 @ 02:56 AM
link
because AMERICA will never be fully socialist...yes we have some social programs......but tax peoples income 50 percent and well you have the recipe for a disaster......god i wish our founding fathers were here today......

If Bernie becomes their candidate, democrats will vote for Trump.

I want to see that happening. 😂👍

It's estimated that President Trump will receive 15% to 18% of the Democrat vote, regardless of whom he faces. You're right though..That percentage would increase if Sanders is his opponent. But 65% of Sanders supporters say they will not vote for anyone if Bernie is not the nominee.

Ironically, most of the Sanders tax increase will be used to fund Universal Healthcare, which is something young people don't use much of.

And many (most?) of them have no college debt to have paid off, cause they didn't go to college.

So the $15 @ hour they make at Home Depot will be reduced to $9.00 per hour, JUST BY THE FEDERAL deductions. Add in state, local, social security deductions, and they will have screwed themselves royally, by electing Bernie Sanders.

posted on Feb, 28 2020 @ 03:15 AM
link
It will be a landslide, i think its going to very much mirror UK elections, Americans wont vote for a Marxist, they'll vote for something between centrist/socialist, but still i think Trump wins that toss to

The far left are just super active lunatics giving off the false impressions on social media and the likes they have numbers, they don't, the silent majority will turn out again, and in bigger numbers

Today i witnesses the most sickest thing I've seen to date from the far left, literally praying for a major pandemic outbreak and financial collapse, you cant get any more sick twisted and deranged as that, that is why these nutjobs need to be kept as far away from power as possible, its easy to see now why these commies are responsible for hundreds of millions of dead bodies achieving their utopia nobody has ever seen

originally posted by: MissCoyote
because AMERICA will never be fully socialist...yes we have some social programs......but tax peoples income 50 percent and well you have the recipe for a disaster......god i wish our founding fathers were here today......

Our founding fathers wouldn't believe that 50% of Americans want a Socialist society. When our country was founded, which other countries were Socialist at the time? I wonder if they had a bad reputation, like Bernie's favorites, Cuba and Russia?

we didnt even wanna be taxed for tea, capitalism was born in 1773....to be nothing like our PARENT.....
America the rebeliious teen

This screenshot is from CNN taken November 3rd, 2016. I was really into the election on Facebook and had been posting them on the run up to election day. I said if this is even close to accurate, get ready for your scandalous new President Hillary Clinton. 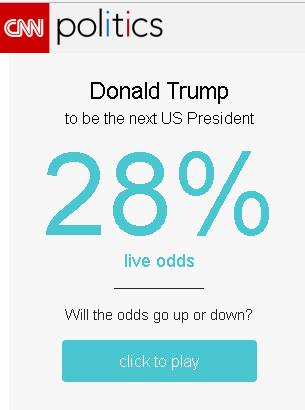 I was more for Trump than her if you can believe it. I wrote that if Trump won, I'd have to stop trusting CNN as a legit media source as a joke. This was their most favorable odds for Trump too. Weeks prior, the percentage was in the teens.
edit on 28-2-2020 by FlyingSquirrel because: (no reason given)

Americans knew that Democrats push for Open Borders increased the danger to U.S. citizens. Most people felt that their heart was in the right place, but their brains were not functioning logically.

But as you said, this week Democrats openly want Americans to die from CornonaV-19, and they want U.S. workers to lose billions of dollars from their 401K plans.

I've always said they were "EVIL", but most rational/good people refused to believe any elected official, or Media Outlet, could be THAT cold and uncaring.

Maybe after this week, significantly more Americans will realize the sickening truth about Democrats and the liberal media. (Even FoxNews is rooting for CV-19 disaster)

Sorry, but this is the most delusional horsesnip I have ever seen in my entire life. Joe Biden can't pack an Arby's. He is a botox and dementia sundae with a side of pickled kiddie-sniffing. He is nothing. He has always been nothing.

Bernie might want to break the bank, but he is the only candidate on the Dem side who can go toe to toe with Trump. He'll lose too, but it will be close. Trump takes Florida, Bernie takes Pennsylvania. It's a long dark night, and the president squeaks through with a W. Four more years.

Biden doesn't even know what office he is running for. Everything about this thread is idiot propaganda.

ummmmmmmm Id never wish ill will but we dont have a cure "publicly" to this virus which isnt what this thread is about..... but open borders DO NOT HELP OUR ECONOMY.

I think those CNN "live polls" receive votes from people who visit CNN.com. Democrats are who habitually visit CNN.com, hence the heavily weighted scores towards Hillary in 2016.

OUR economy includes every LEGIT able bodied worker to build themself (damn capitalism) and and have the life KNOWLEDGE to keep it that way....

How would Home Depot workers who already make $15/hr lose over 33% of their wage, -$6/hr if the Federal minimum wage was set to $15/hr? You said "federal deductions" but tax isn't nearly that high, federal state and social security included.

It was explained to me at work that if the minimum wage is increased to what I already make that I'd get a raise when it happened because it's about to go up in my state, or so I've heard.

I asked what would happen to the pay rate of employees who had already been working there for a longer period of time and received raises in the past.
edit on 28-2-2020 by FlyingSquirrel because: (no reason given)

I bet you called it horsesh'it when Democrats/MSM predicted they'd win a majority in the U.S. House in Nov 2018, thanks to Ocasio-Cortez, Rashida Tliab, and Ilhan Omar, didn't you?

Every company is free to treat employees pay raises however they see fit, so long as no employee grosses under $15.00 per hour BEFORE taxes are taken.

Also, it looks like you neglected to factor in the 27% increase in Federal Tax deductions, that Bernie Sander's initiatives will require.