posted on Dec, 9 2019 @ 12:33 PM
link
If there is a consistent pattern it's not an error. Errors and mistakes are suppose to be uncommon, hardly any. That's why it's called an error. Not the case here. Deliberate action after action to create the outcome they wanted.

Although not mentioned in the EC, at the time, FBI officials involved in opening the investigation had reason to believe that Russia may have been connected to the Wikileaks disclosures that occurred earlier in July 2016, and were aware of information regarding Russia's efforts to interfere with the 2016 U.S. elections. These officials, though, did not become aware of Steele's election reporting until weeks later and we therefore determined that Steele's reports played no role in the Crossfire Hurricane opening.

Well, so much for the whole FISA thing.

We concluded that the failures described above
and in this report represent serious performance
failures by the supervisory and non-supervisory agents
with responsibility over the FISA applications. These
failures prevented OI from fully performing its
gatekeeper function and deprived the decision makers
the opportunity to make fully informed decisions.
Although some of the factual misstatements and
omissions we fou nd in t his review were arguably more
significant than others, we believe t hat all of them
taken together resulted in FISA applications that made
it appear that the information supporting probable
cause was stronger than was actually the case.

We identified at least 17 significant errors or
omissions in the Carter Page FISA applications, and
many additional errors in the Woods Procedures. These
errors and omissions resulted from case agents
providing wrong or incomplete infor mation to OI and
failing to flag important issues for discussion. While we
did not find documentary or testimonial evidence of
intentional misconduct on the part of the case agents
who assisted OI in preparing the applications, or the
agents and supervisors who performed the Woods
Procedures, we also did not receive satisfactory
explanations for the errors or problems we identified.
In most instances, t he agents and supervisors told us
that they either did not know or recall why the
information was not shared with OI, that the failure to
do so may have been an oversight, that they did not
recognize at t he time the relevance of t he information
to t he FISA application, or that they did not believe the
missing information to be significant . On this last point,
we believe that case agents may have improperly
substituted their own j udgments in place of the
j udgment of OI, or in place of the court, to weigh t_he
probative va lue of t he information. Further, the failure
to update OI on all significant case developments
relevant to the FISA applications led us to conclude that
the agents and supervisors did not give appropriate
attention or treatment to t he facts that cut against
probable cause, or reassess t he information supporting
probable cause as the investigation progressed. The
agents and SSAs also did not follow, or appear to even
know, the requirements in t he Woods Procedures to reverify the factual assertions from previous applicationsthat are repeated in renewal applications and verify
source characterization statements with the CHS
handling agent and document the verification in the
Woods File.

They wouldn't have fired him otherwise.

Grambler
+4 more
posted on Dec, 9 2019 @ 12:39 PM
link
Page 8 shows that the FBI relied entirely on the steele dossier for the claim carter page was working with russians to influence the elections.

Page 9 shows the FBI had no corroboration of steeles claims when they used them for the fisa warrant.

I wrote about this in october of 2017,, saying if unverified opposition research was used to spy on the opposition candidates team, this was the biggest political scandal in the history of the country.

I was told there was no proof the dossier was used, or it was on partly used, or there was evidence to back it up and verify it.

The dems and media will spin this as no crimes committed by the fbi.

But this literally means any president (even trump) may now use unverified info that he pays for to spy on their opponents.

This is far more damaging than anything russia could ever do to us.

.....While we
did not find documentary or testimonial evidence of
intentional misconduct on the part of the case agents
who assisted OI in preparing the applications,....

posted on Dec, 9 2019 @ 12:40 PM
link
Prediction: Despite the Q-LARPing and tick tocking there will be no meaningful charges filed against anyone.

originally posted by: underwerks
a reply to: neo96

It says a hell of alot more than that.

posted on Dec, 9 2019 @ 12:48 PM
link
It is amusing to see blissfully ignorant hypocrisy of some members clearly disappointed by this "nothing burger".

Those previously gleeful about the Mueller report are now scrounge for something to cling to.

The swamp ain't being drained, its as disgusting as its ever been.

We identified another CHS that the Crossfire
Hurricane team first learned about in 2017, alter the
CHS voluntaril rovided his/her handlin a ent with an
-and the handling
agent forwarded the material, through his supervisor
and FBI Head uarters to the Crossfire Hurricane team.

Is Rod Rosenstein doesn't go to jail for signing off on those fisa requests then there is absolutely no enforceable laws against high-level bureaucrats
edit on 12 9 2019 by dashen because: (no reason given)

This is worse than I initially thought, and I am only on page 11

originally posted by: dashen
Is Rod Rosenstein doesn't go to jail for signing off on those fisa requests then there is absolutely no enforceable laws against high-level bureaucrats

Let me get my GIF of someone blowing smoke.

Repeat, no one is getting charged with anything of any consequence. Maybe a little slappy-poo on the wrist.

Prepare to be disappointed.

If you really find this nothing burger w/ weak sauce "devastating" and beyond belief what on earth were you expecting?
This is a massive disappointed for Republicans, its Barr or nothing now for Trump. 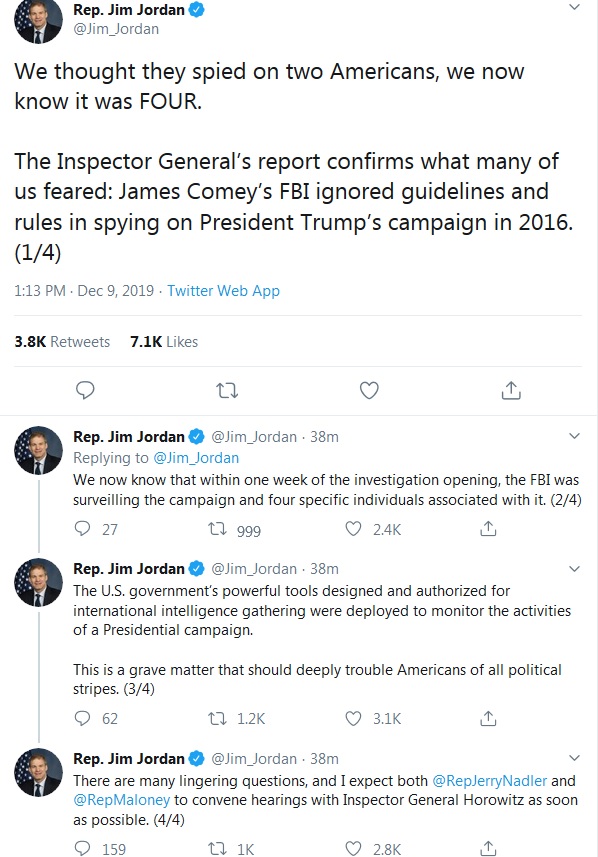 Are we going to have to wait all the way till the Huber investigation?

This is a massive disappointed for Republicans

Says who? A newbie Libbie? LMAO.

Did you even bother reading the report, or are you too busy trolling??

Why doesn't anyone talk about what the compromising information against Clinton was?
edit on 12 9 2019 by dashen because: Welcome to clown world