posted on Oct, 19 2019 @ 12:58 PM
link
(1) I'm trying to watch the interviews on TV which are outside parliament, and I am sick to the back teeth of the same stupid knob who keeps shouting from the sidelines, making it hard to hear the political discussions.
I get it mate, you wanna stay in the EU cool, STFU though so the rest of us watching live TV can hear the arguments.

(2) I don't like Jacob Rees Mogg but the behaviour of the remainers was very unkind today he was walking with his young son ffs who he ushered ahead with a few cops to get him away from the anger of the crowd.

(3) I voted remain, my constituency overwhelmingly voted leave, and the UK as an entity voted leave.
I am almost pulling my hair out because of remainers saying they didn't think it could mean a no deal or doom or whatever. Like WTF? I voted remain because of all the doom talk of crashing out of the EU, if you didn't understand that then you are illiterate or didn't read the numerous doom claims from the remain campaign.

I support democracy, I lost the vote so now I run with the result as it stood 3 years ago. I knew exactly what the possible outcomes were because the remain campaign told me.
If we don't leave the EU then there really is no democracy in the UK, just MP's who vote against their constituents wishes in parliament, all 100+ of them...#ing traitors.
👿👿👿
edit on 19-10-2019 by DaisyRainbow because: Fixed stupid autocorrect Mogg from Mott lol
edit on 19-10-2019 by DaisyRainbow because: Fixed number of MP traitors 😂

I'd take a full general election instead right now, be interesting to see how many MP's who voted in parliament against the wishes of their constituents win their local vote again 🤔


what if they don't want to join then what? Do you force it like Germany did during ww2 with the barrel of a gun?

its beginning to feel like that to me, and I voted remain!
400+ MP's local constituencies voted leave, if they represented their people who voted for them in parliament then it would be an overwhelming majority vote to leave the EU back in March...#ing traitors 👿


If we don't leave the EU then there really is no democracy in the UK, just MP's who vote against their constituents wishes in parliament, all 100+ of them...#ing traitors.


In the last three years we've learned a lot about our representatives in Parliament , none of it good , I don't think they understand that although Democracy is a nice thing for then to espouse it needs to be seen in action if we are to believe in it ,
More delay just leads to more delay.


One world government, is not my future...and it wont work

Folks in GB voted, remain lost...suck it up

One world government, is not my future...and it wont work

If proof of that were required thats why the UK voted to leave, and there are

other countries waiting in the wings to leave ...... taking lessons from what the

UK is having to put up with to regain their independence.


Folks in GB voted, remain lost...suck it up

Politicians take note , Your jobs are on the line at the next election!!!!

Look all over the world though, peeps are rebelling allo ver the world against the establishement, be it left or right...doesnt matter. It almost feels like the shackles are coming off.

"Meet the new boss, same as the old boss"
Da Who

Yeah, that chap that keeps yelling "stooooooooop breeeeeeeeexiiiiit" is annoying. I agree with his message, but not with the way it is brought

The great difficulties Parliament has with all this makes sense to me. 52/48 is hardly a "overwhelming majority". Political agenda's of minorities get in the way too: the DUP is hardly representing all of Britain, but it is blocking important decisions. But perhaps that's a good thing. Remember: the people were lied to about the costs and benefits of membership of the EU. It is similar to pointing to a 1500 pound bill from the garage and shouting "let's get rid of the car, it's expensive!". Yes, it is. But you're forgetting that you drove 20.000 miles in that car last year and it enabled you to do your job in the first place.

Totally agree 👍
My MP is safe because he voted for all the leave stuff in parliament same as most folk in our constituency, but more than a few are worried about the next general election 😂

posted on Oct, 19 2019 @ 02:43 PM
link
The benefit of the last 3 years is that it is clear who the traitors to this country are. In their desperation, the rats have had to scurry into the sunlight. At election time they will face the public.
In addition it's been made clear that the media in this country is nothing more than a propaganda machine and our courts are corrupt.
The people will put this right. I have faith that the real backbone of Great Britain still exists.
edit on 19/10/2019 by UKTruth because: (no reason given)

Whole thing is a mess though, showing the world how crap our form of government actually is, potentially calling a hereditary Queen in at times ffs, what century was I born in again??? It's #ing embarrassing for UK for sure 😂😂😂

posted on Oct, 19 2019 @ 02:48 PM
link
Thing with Brexit is....the EU CANT let u go without a fuss cuz Italy would be next. Peeps just dont understand the EU is designed to help Germany and France.

They dont give a toss about you guys. Go look at the store shelves in France or Germany.....aint no Limey products there...and the ones that are.....are 10x as expensive.
Just sayin.

originally posted by: eletheia and there are other countries waiting in the wings to leave ...... taking lessons from what the UK is having to put up with to regain their independence.

Bah, humbug. The UK has to put up with what it does itself. The EU is behaving predictable, well concerted and tries to remain beneficial at all times. They have kept the other 27 nations in line and informed and remarkably in unison. They have show great flexibility in adapting to the mostly absurd behaviour of the British Government, even when that same Government put the EU in a bind by asking it to redo an already closed deal in just a few days. The EU is showing its dedication to the peace process and to the unity of the nations on a daily basis.

That can't hardly be said of the UK.

The UK acts as a spoiled brat. It has always done so: first, when it got its panties in a knot about being refused membership of the EU. It kept whining and nagging to get in. Once in, it kept asking for favours none of the other nations had. The brat had to keep it's own currency, it refused to sign Schengen and only half-heartedly accepted the metric system. And it's inhabitants still drive on the wrong side of the road

Nothing wrong with the EU, mate. But A LOT with a Parliament led by a PM that has not been elected, shows all kinds of signs that he is a dictator and who, even today, indicates that he would not find it a problem to break the Law, if he only can get Britain out of the EU, deal or not. Bah, humbug.
edit on 19-10-2019 by ForteanOrg because: he accidentally did not add his closing line.

hey USA, you ready to accept us? we'll smash the demorats together

51st state inbound, last stand coming in hot
edit on 19-10-2019 by TritonTaranis because: (no reason given)

posted on Oct, 19 2019 @ 03:27 PM
link
Boris Johnson has written a letter to MPs tonight telling them he won't negotiate an extension past October 31st. 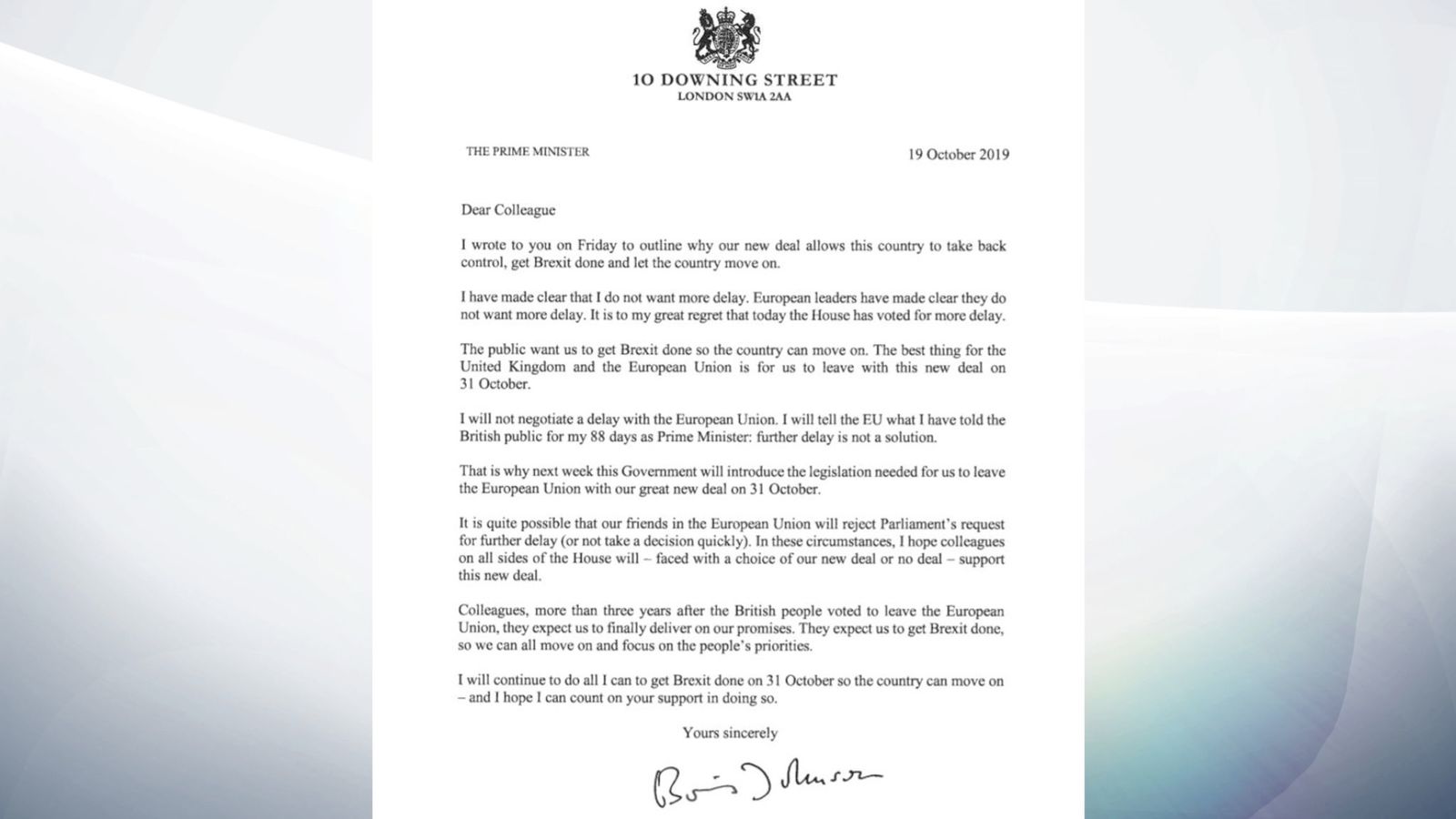 Johnson's hero is Churchill , his determination Churchillian.... " we shall fight them on the benches"

Grin. And that coming from a guy that has the French motto "honi soit qui mal y pense" in his avatar.. you are more European than you realise

originally posted by: gortex
Johnson's hero is Churchill , his determination Churchillian.... " we shall fight them on the benches"

Only problem is: there is no war going on...

You do remember, I hope, what happened to Churchill after the war was over?