US Shadow Government Being Exposed?

posted on Aug, 12 2019 @ 10:18 PM
link
Since we're in the Skunk Works, I'm going to take it a step further and say the absolute true powers that rule/run our world are not actually from this planet-- and even possibly otherworldy.

A lot of tin-foil required.

Side note: I would still confidently make this assertion outside of the Skunk Works.

A look at the origins, history and conspiracies behind the "Majestic 12", a clandestine group of military and corporate figureheads charged with reverse-engineering extraterrestrial technology.

Haven't heard if it before, but like I said, prior to now, this general topic is not my bag.

Has anyone actually bothered to read the IC Russian 'Hacking' Assessment?

Now even the quality of that 'assessment' starts to make sense to me.
edit on 12-8-2019 by loam because: (no reason given)

No, unfortunately not. It was an awkward project to research, and many scholars were uncomfortable the more that was learned.

On ATS, yes. Just hit the research forum and scroll through m or do a search. Some very good resources or trails of to follow up with.

I would love to see a reboot of the research tbh.

How times have changed, while corrupt parasite politicians stay the same.


I am known for using that very quote frequently.

An absolute maxim of the universe.

They saw these signs in everyday life, challenge the status quo and arrived to the same conclusion.

This whole thing we call reality is rigged.

Finally these types of stories are breaking loose and leading more credit to such constructed group thesis.

A) In control of everything, appointing their puppet to the top table and able to keep them in power as long as they want. Showing off somewhat by managing to get a failed reality TV reject with a long history of racism, self confessed sex offender and keeping him in power even after Mueller stated if he wasn't president he would be in prison for the Russian thing.

B) Inept much like Inspector Clouseau and back the loser everytime. Hilldog, Newt, Mitt, Swift Boat and Gore were the picks but, well, you know.

It can't be a mixture of both, if there is a shadowy deep state installing their puppets trump is their guy. Barr isn't some genius able to outwit, well anything, the Mueller report found trump guilty on numerous counts only 'you can't impeach a sitting president' saving him. If this deep state didn't know that they definitely fall into category B, which means they have never had any power.

Turkey and Egypt are examples of countries ran by a form of deep state, when the army gets tired of the leader they overthrow them, Paul Manafort kinda pulled it off in the Ukraine too.

Trump supporters, not well versed on politics (see any thread on socialism or the left, lol) but with 100% fanboi level achievement unlocked need to spread blame for bonehead policies and decisions elsewhere, last month was hillary, last week was pizza toppings and today it's the deep state.
After 9/11 George W. Bush was called a deep state operative by conspiracy theorists, working alongside evil Israel to spread Judaism, or something but, since then not so much. Those same conspiracy theorists were offended by Obama and demanded to see his birth certificate, Benghazi was an inside job etc, etc.

Im sure some Americans would prefer some form of deep state, what with trump crippling the country (check the deficit) and the dems only able to find a boring bunch of poindexters who will just shout "moar capitalism", lean times.
My country sucks too but its not as if we're point scoring. 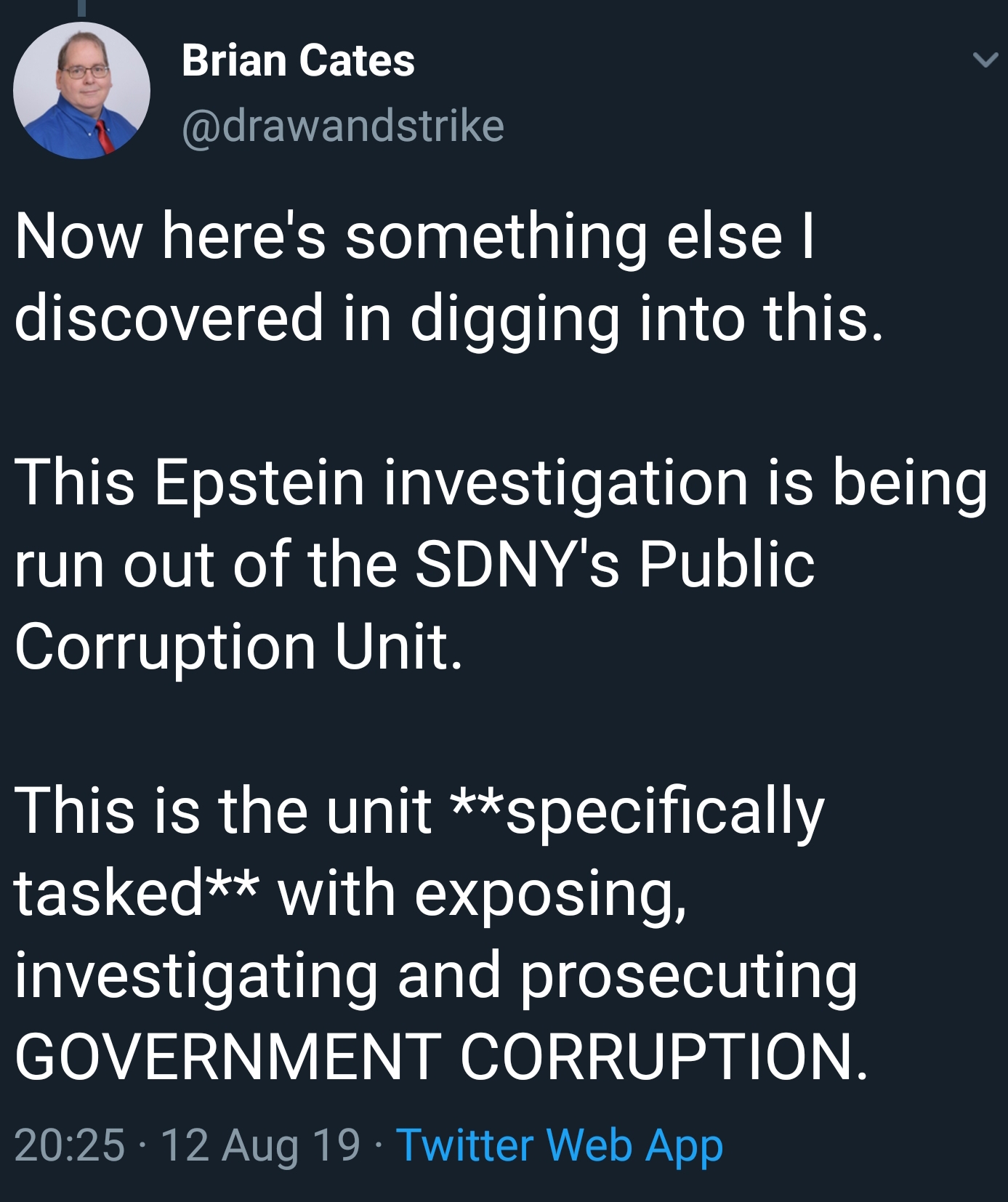 
I would seriously consider changing "people I know" then.

“Is the Epstein case going to cause a problem [for confirmation hearings]?” Acosta had been asked. Acosta had explained, breezily, apparently, that back in the day he’d had just one meeting on the Epstein case. He’d cut the non-prosecution deal with one of Epstein’s attorneys because he had “been told” to back off, that Epstein was above his pay grade. “I was told Epstein ‘belonged to intelligence’ and to leave it alone,” he told his interviewers in the Trump transition, who evidently thought that was a sufficient answer and went ahead and hired Acosta. (The Labor Department had no comment when asked about this.)

But much worse was to come from Epstein’s army of willfully blind lobbyists. In 2007 and 2008, as the FBI prepared a 53-page indictment that would charge Epstein with sex crimes, Epstein’s powerful legal team played the influence card.

After the one meeting with then-U.S. Attorney Acosta, where presumably “intelligence” was mentioned, the indictment was shelved and, instead, Epstein signed a non-prosecution agreement with federal prosecutors, pleading guilty to one count of solicitation of prostitution and one count of procurement of minors for prostitution, which earned him a cushy 13 months in county jail, from where he was allowed to leave to work at his office and go for walks.

The deal granted immunity to “any potential co-conspirators.” Most significantly, federal prosecutors agreed to keep the deal secret from Epstein’s victims, which meant they would not know to challenge it in court. As it turned out, this actually broke the law, because victims have a right to know of such developments, under the Crime Victims’ Rights Act.


So even that bit makes sense now. Compromised people are hardly useful once they've been burned and sent to prison. 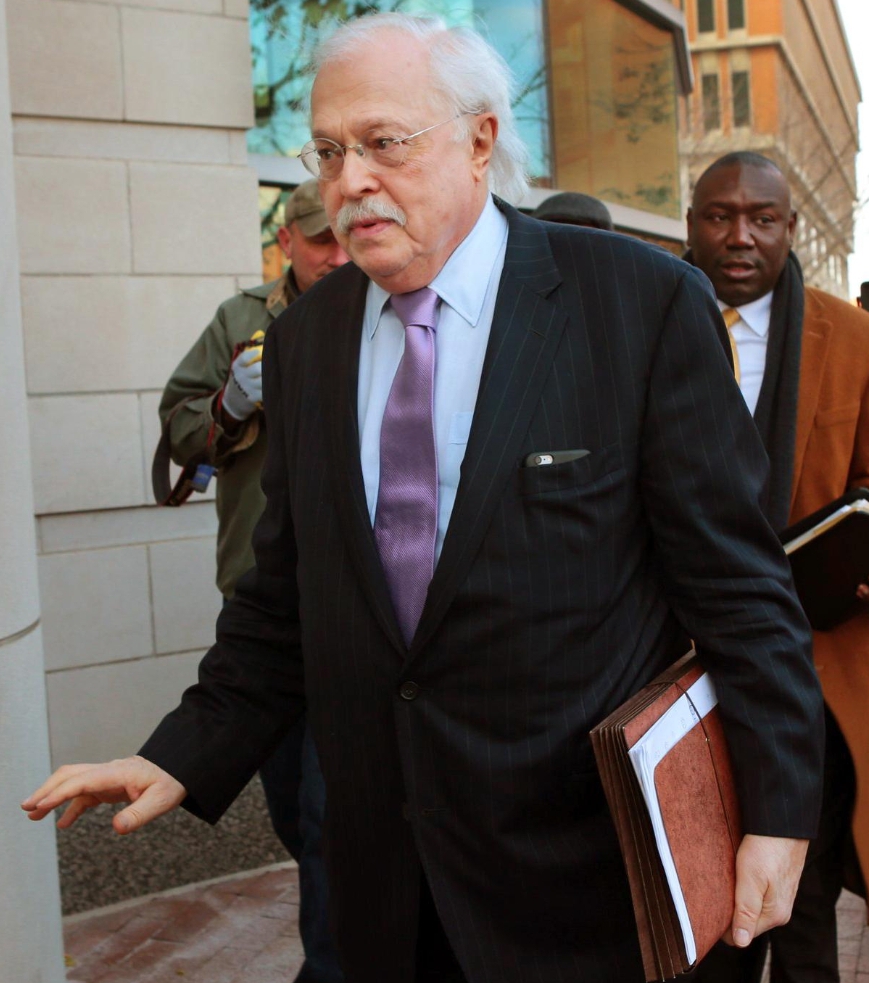 So who is Dr. Micheal Baden???

Are you freaking kidding me? What are the chances?

(post by Peeple removed for political trolling and baiting)
loam

Don't worry, trumps doj is investigating the ct crowd like never before.

Look what this administration let happen to 8chan.

Those people were loudly talking civil war, even here on ats.

But not now. Why? Because the ds/powers that be have them scared.

I don't want war so I'm conflicted about this. Not sure how I feel about this yet.
I might change my mind if they shut down any forums that I care about.


The Government is just the executive figure of the state's power, not the power of the state itself, and thou the people directly involved in it and the masses they represent have some real "capital possessions" they are far from possessing all the capitals, which is the source of power in the so called "capitalism". People quite often seem to miss the practical fact that we(world) still follow the feudal pattern of one "king" backed by many "barons". With the only difference that nowadays the barons are "narco-barons" or "tech-gun-barons". So if the government which represents the "King" or "The people" in our so called "democracy", owns lets say piece of it(power, capitals), this piece would be not more than the piece that William of Normandy owned from Britain back when feudalism was the thing of the day. An that was around(ish) 20% from the land(capital at that period). So guess who owns the rest 80% capital nowadays.

Exactly… you guessed it.

You know, True Lies was one of my favorite movies as a kid.

I do think there are super secret agencies that make the NSA and DIA look famous and well known, but I don't think they'd really go by the name Omega. Well wait, maybe they would? These are "True Lies" after all aren't they?

Well, dude, I'd say it's a group that has infiltrated and seeks to control from within. Sure. But still there is rule of law and military guys that will protect the country.

originally posted by: Stupidsecrets
It's very difficult to believe a shadow government or even a deep state because this guy, this guy they hate more than anyone they have ever hated won the highest office.

I do believe they tried their best before and after he was elected but it all backfired. For a time, they lost all three branches. They did get one back but it wasn't convincing because they lost more seats in the other branch and can't seem to pick up anymore momentum.

All their investigations, allegations went nowhere. I can't think of anything they beat him on to be honest other than stalling the border wall progress but even that is being done slowly.

If they are so powerful why do continue to get beat. To me it just looks like some angry mob that can't focus on a real strategy to do anything at all but complain and name call.

Nonsense. "They" are not the deep state. The Democrats, just like the Republicans, are just actors who project legitimacy for the agenda of the actual rulers. The opposition to Trump does not come from the deep state, it comes from rivals to the position of lackey to the deep state. Note how Trump never mentions the military industrial complex as a problem. Note that he does not regard the mass surveillance systems of the three letter agencies as a problem, just certain individuals within those agencies who oppose him. Note that all of Trump's appointments come from the same roster of the corrupt as always. Bolton the MIC shill. Haspel the dungeon master of Bush jr. Barr the AG of Bush sr. and accomplice to shady things like mass surveillance and the Iran-Contra cover up. Pompeo the aerospace tycoon with connections to Koch industries and the military who jumped sectors to oil before ending up as CIA director (if those connections don't raise a monstrous red flag, you haven't done your homework).
THEY are doing just fine under Trump. The corrupt "left" are not the deep state, they are puppets who are mad that their rivals are the ones in the spotlight. That's all positions such as the presidency or congress seats are as well, well paid acting gigs with an ironic prestige that comes from the utter ignorance of the public as to the truth of our situation.