posted on Jun, 25 2019 @ 03:41 PM
link
So another OP today writes that an outbreak called Group A Streptococcusis killing elderly in the UK. You can read about it here:

Well I took a look on The World Health Organizations web site today and not a peep about Group A Streptococcusis, however this information has been reported out by the BBC and others. So that's this month but just past February 2019 it was reported out by the Guardian that 50,000 elderly in England have died waiting for a social care package. Hmmm. So dam the torpedoes and full speed ahead on Mass Migration yet the UK hasen't the money or resources to care for your own elderly? So wheres the queen? So you think there's a link or connection to the Group A Streptococcusis situation and the Care Package delay? Why is that mass migration concepts continue to be pushed on all countries already deep in debt because they are already so poor and simply cant take care of there elderly. I mean the pushers here are the UN and the Pope all progressives oh my!

Ministers accused of being ‘in denial’

Age UK estimated that, in England, 54,000 people – or 77 a day – have died while waiting for a care package in the 700 days since the government first said in March 2017 it would publish its social care green paper, which has since been delayed several times.


Free is the new black.

Sure go ahead blame Trump. It fashionable.

So is this another thread to defend Trump of something prior to anyone accusing him of anything, man you got it bad, never mind the elderly as long as Trump is not blamed, I am not even sure why you bothered with such a well written thread to then devalue it with your final line.

Similar to your other thread, seems to be you have to defend Trump at all costs, no doubt I will get labled as having TDS, but I am not even sure what Trump has to do with elderly dying in the UK

Who Fanned The Flames? Anti-Semitic crimes have shot up 106% compared to the same period last year!

You know good one. I will take it out and let them roll with it. Thanks

The thing is, this is due to 'austerity' cuts in social care which has resulted in the most vulnerable and needy in our society being deliberately targeted.
The simple fact is that if funded and managed correctly this wouldn't happen.

Austerity has been nothing but the pursuit of a political ideology rather than a financial necessity and as a direct result millions have suffered....all whilst the most wealthy in the UK are getting richer and richer.

I could care less about him. Actually, all of the pins were set up for him by others to straighten this entire thing out yet he cant go one minute without blowing his wad. So if he was more of a tactician we would not be in this situation right here right now, she would be locked up and life goes on. Back in 2016 before the election I heard from a Delta pilot who knew a Agent in the State Department that said that if she was elected they would lock her up and if he was, he would not be around long.

Wrong on both accounts as someone screwed something up. QANON?

I will yield to other OPS in the UK. Its their yard.

Actually whether you know it or not but by many saying in public that hes stupid gives him an out from any and all prosecution as it could be argued in court that hes considered as "managerial incompetence". One case I am aware of is that the US Attorney let almost the entire senior management team off the hook on criminal charges on that rational.

There has been stealth eugenics war raging against our elderly, sick and mentally infirm for quite some time.

Truth is after Brexit, and the probable amendment to our Human rights, a lot of people who our government and society deem undesirable are about to die, or at least allowed to expire at "There" leisure.

Now wait a minute.
America is evil people getting richer.
European countries are supposed to be different.

Any time the banks control the government, they screw it every which way from Sunday.

It's not governments that are evil, but they are playing Checkers, whilst the people and corporations with the real money and power, are playing Chess.

Not like you mate to engage in a spot of sensationalism.
All for dramatic effect I suppose.

Brexit won't be the cause; Tories and their policies could well be.

Now wait a minute.
America is evil people getting richer.

Nothing wrong with hard work, initiative and enterprise being rewarded....only a complete moron would think so.

European countries are supposed to be different.

We keep on telling you guys not to believe all #e MSM drip feeds you.

Much of the time.
Problem here is the serial underfunding and continued mis-management of our NHS by successive administrations in order to back door privatisation so that a very small minority of people who already have obscene amounts of money can make even more money out of the suffering and death of the most vulnerable and needy in our society. 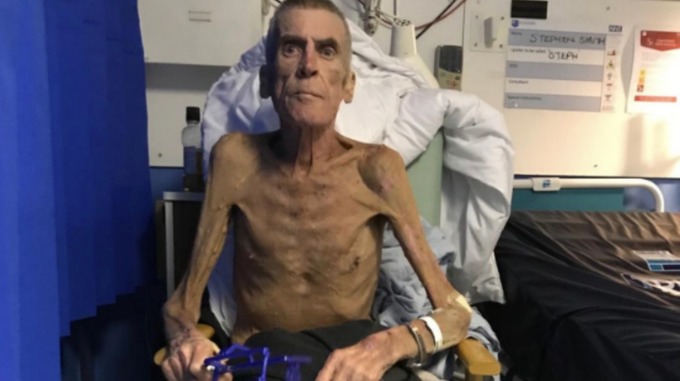 Sensationalism is not the word i would use.

Are far better adjectives to describe what happens next, and is happening right now.
edit on 25-6-2019 by andy06shake because: (no reason given)

Come on now Andy, you could provide a link to the source or external quotes etc.
I'm not saying the guys obviously serious condition isn't due to government austerity cuts but some sort of supportive evidence wouldn't go amiss.

The sensationalism I was on about was blaming hypothetical future deaths on Brexit and NOT on the Tory scum who have been pursuing this inhumane and totally unnecessary austerity policy for quite a number of years now and are deliberately running our NHS system in to the ground.

I thought you would have known about this poor fellow.

There is your Tory scum and then some, well not yours, but none the less apparent.

Just for context that pic could be of any elderly having undergone a "successful" chemo treatment.

A pic can say anything you want it to.

No need to put it past anything.

The links above you now.

And adds ""plenty"" of context, unfortunately, and the poor fellows not an anomaly nether, 1000s more just like him that go unreported each day of the week.

Yeah I do get it. They keep increasing our age pension age in Australia as well.

"We're broke we're broke" is the Govts often quoted cry. Funny how there's always money to bail out Banks or go off to another war for the MIC.