posted on Feb, 9 2019 @ 11:25 AM
link
I saw something I found incredible offensive. It was supposed to be a joke but it's just not funny. Besides it's simply not true. 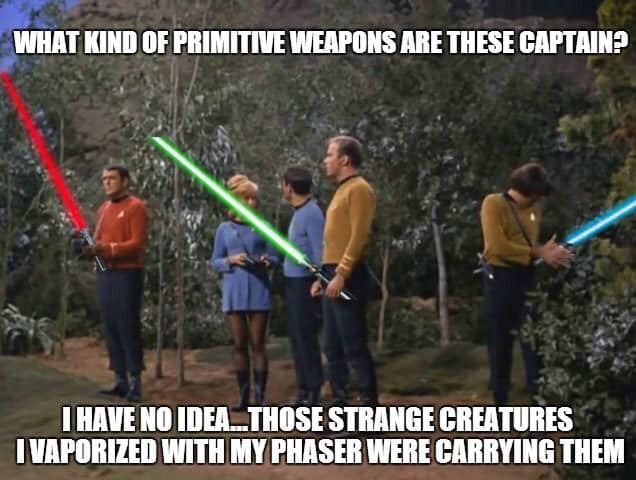 This would never happen. And I tell you why:
1. Through the force the Jedis would have seen them coming
2. Kirk would never attack a Jedi they're too sexy
3. If he would think about it the Jedis could use the force without having to pull out a phaser

I'm sick and tired of this kind of discrimination going on. Because what? Disney? Please that doesn't change the fact that the worst Padawan could destroy the best of the Star Trek crew in the blink of an eye.
Get your facts straight people and just
It happened in a galaxy a long time ago and not some techno-hippies in the future.
The Jedis will find us someday, but we will never work together as planet to explore space.
Nuclear fusion as propulsion as in an ion engine is at least plausible, on the other hand how the # and what the # is warp?
just

Not. Funny.
May the force be with you

posted on Feb, 9 2019 @ 11:29 AM
link
Actually a short google search would show you that a theoretical warp bubble drive has been pondered by many notable scientists. Oh and and starwars is poop star trek forever baby!!!

Of course you do. At least own it if you're posting this offensive crap. I'm hurt and disgusted. This is the most serious issue our society is facing.

Is so! Captain could totally "pain grillé" Yoda, even if Yoda did his acrobatics. There is no contest!

Sure and who considered it? Techno-hippies with such a humocentric view of the universe they think they could bend and warp spacetime itself. Puhlease

I sense a low midichlorian count. Don't worry, if the Jedi counsel rejects you, you always have a place on the Enterprise

No there really is no contest. Consider this, you have to aim and Pull a trigger that's at least 0,436 seconds slower than a force push. And then you're precious Captain would lay flat on his back.

Dude I don't want to sound like the dark side would have a chance but I got at least 15.000 per cell

That sounds like pride, and we all know what that leads to...

originally posted by: Autorico
a reply to: Peeple

I sense a low midichlorian count. Don't worry, if the Jedi counsel rejects you, you always have a place on the Enterprise

If you translate it, midichlorian is actually "testosterone" in English...

That's why we had to wait for the transgender era to have a female Jedi main character. Shes been doing the hormone treatments.

originally posted by: coldlikecustard
a reply to: Peeple

Try to read it again, but this time, with a sense of humor.

What is rude about techno-hippies? I'm outraged and my emotions are running wild here. No offense intended.
NASA has a few individuals who would take that label without hesitation I'm sure

You seem stressed. I will have the medical officer requisition you some holodeck time.

No it's a nano life form from the beginning of the galaxy.
Show me a link if you want me to believe that. To a translation page.

Let me enjoy a few minutes the feeling of this being the most important thing. A break