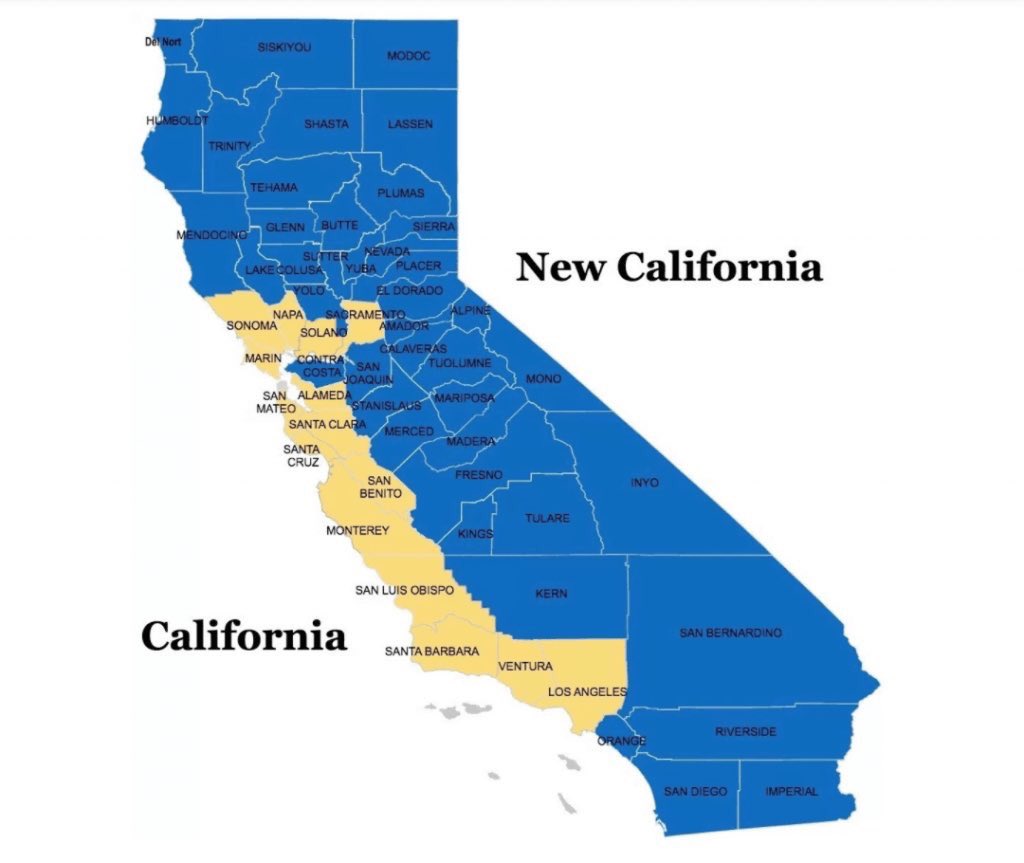 SACRAMENTO (CBS13) — With the reading of their own version of a Declaration of Independence, founders of the state of New California took the first steps to what they hope will eventually lead to statehood. To be clear, they don’t want to leave the United States, just California.

From the main local MSM source:

"Founders of "New California" declare independence from the Golden State"


"New California declares "independence" from rest of state"
"A right of the people to seek a constitutional remedy." It's been ungovernable for a long time, taxes, education..." "New California wants to do things by the book... similar to West Virginia."

Instead of leaving the US, this new proposed part of California would incorporate parts of the rural areas minus the coastal high population zones. 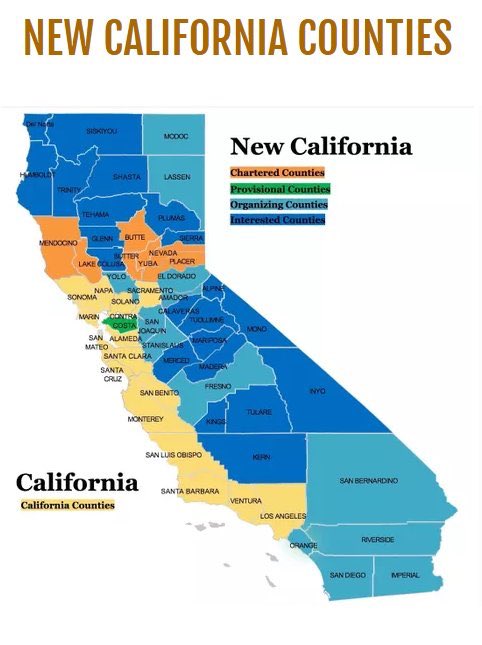 First off, no one posted this yet? I assume due to that it's still breaking, and that the state has a bad reputation around here, however this just might be news to states with issues, including the one mentioned, on how they may be able work with the concerns.

In there past there has been talk of the State of Jefferson, which includes the northern part of the state and Southern Oregon, breaking from the state. Now they have gone and done this apparently encompassing more of the state than the State of Jefferson. With that I am hardly surprised, being that other states deal with these similar issues as well. Wonder if this will mean more of a go ahead for them. As well as looking for more on what this means for the state and elsewhere.

The article concludes that it will take 10 to 18 months before the Reps will be ready to engage with the state's legislature. What does it mean for the rest of the US-ie food, import, etc. wise? What will the impact be, if any, on the newly legal Recreational Marijuana? Stay tuned, since it's early in it's inception, going to be looking more into sharing the information of it. Thoughts(minus Mud Pitting the thread) and additional data welcome.

edit on 17-1-2018 by dreamingawake because: added another image: counties

So curiously, could this be construed as an act of war?

I used to live in what would have been Jefferson, I wanted so badly to be free of socal. Going to have to keep my eye on this one, though I doubt anything will come of it.

Without force, I can't see it happening. Thus my question.

posted on Jan, 17 2018 @ 12:21 AM
link
Sounds almost like a Micronation initiative, which are actually pretty cool and the worlds needs more of them. Giant monolithic governments are too arbitrary and will always turn to absolute corrupt power where the bigger the badder is to be expected.

I wonder too. Though, may not be an issue because they are staying with the US? Map include San Diego in it, so the Navy, etc., might be an issue? National Gaurd vs New California? 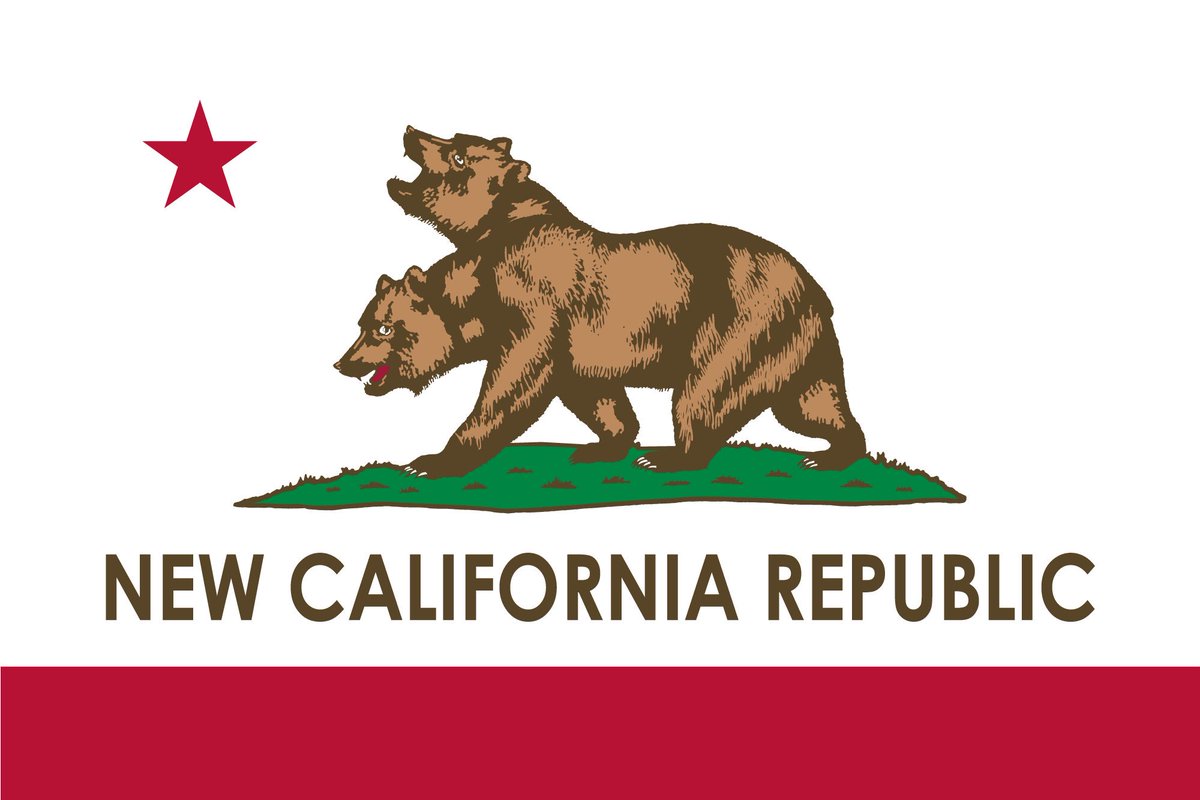 It won't happen.
Someone drew up a map to take the population centers and make them a new state. As a resident of California since '83 today is the first I've heard about this.
This is gerrymandering at it's worst.

I'm not so sure it will either. Here's a more recent state change that was called for in 2016:
Six Californias

Are you guys hearing anything outside of the OP article MSM(CBS)? Wonder how widespread the talk is.

posted on Jan, 17 2018 @ 12:53 AM
link
I know for decades north Ca has always wanted to separate from south Ca, about around Fresno. It is common knowledge the north supports the south with little return, so it makes sense they want to split up.

Vroomfondel
+26 more
posted on Jan, 17 2018 @ 12:56 AM
link
I will never understand these liberals. Even Californians don't want to be in California. They have been leaving in droves and moving to Texas. Texas calls it "getting Californicated". The problem is that these liberals leave California, run by liberals for liberals, because it is a failure and move to Texas because it is a success. That would almost be acceptable except for the fact that once they arrive in Texas they immediately try to influence local government to adopt a more liberal California approach to running the state. smh

Liberals - your failed policies turned California into a giant time-sucking abyss for which there is no cure. Now you flee the state you destroyed so you can continue your failed policies and destroy Texas too. If you want to remain liberal and are looking for a new home, may I suggest Chicago? They love you guys...One big happy self destructing family.

And their new flag looks like someone just got Adobe Illustrator yesterday. 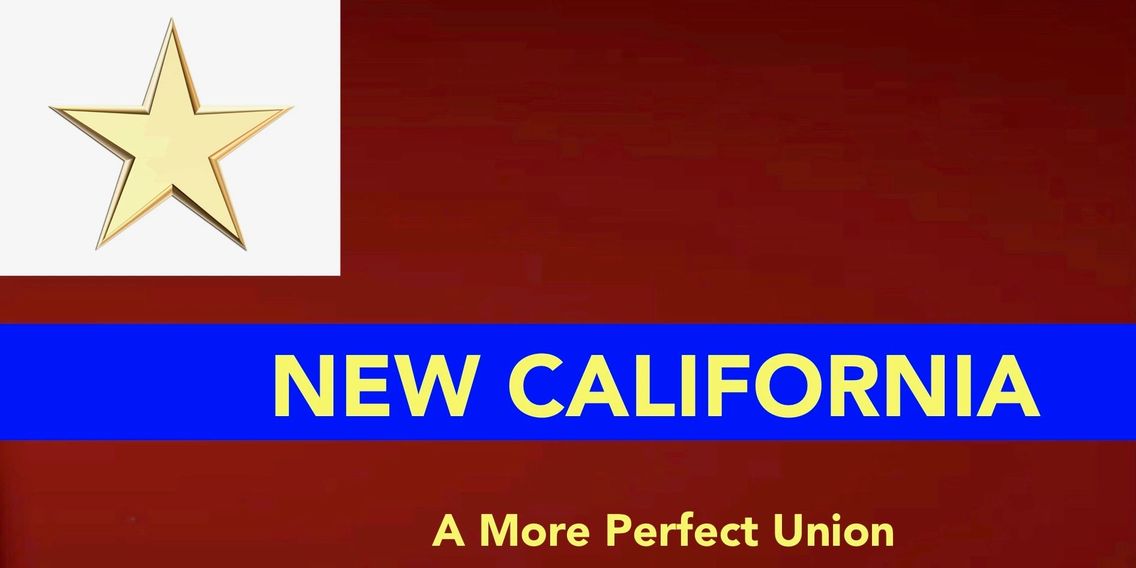 Aww that was sweet of them to awkwardly include my county, despite it looking totally out of place lmfaooo.

Itd also be the only provisional county!

They chose wisely, as we have both Mt. Zion AND Mt. Diablo...

posted on Jan, 17 2018 @ 01:25 AM
link
This is nothing new we have been working on this ever since the socialist in calif wanted to split from the US.

Now that Calexit has folded we still plan to split from the democrat controlled socialist calif.

Sounds like more crap made up by some farm boy,a hater type that makes posts like"Calif will slip into ocean" more uninformed crap,happen to live here,places in the south that still have outhouses as you were

"... and in breaking news tonight, the island of Tasmania has declared its independence from Earth.

As spokesman was heard to comment "You don't know how mad we are about this, even our name includes the word 'mania'. Bwllrrr grnffex fleffle-poop!"

Alex Jones has responded on InfoWars.com with "Oh"?

This outta get the Republicans excited. It's predominantly the conservative part of Cali.... pushed by a conservative group. It'll take maybe what, 10 electoral college points from Cali's overall electoral points? It's a longshot but if they make it through the States legislative processes and legally get their efforts through, more power to them:

With all of that said, it's unlikely that New California will ever come into existence. At least for now. In order to obtain statehood, Preston's group will need approval from the California legislature. It will also need a thumbs up and green signal from the Congress — which is unlikely. Then there's the lengthy and exhausting process of dividing resources and assets among the split states. And finally, the group will need a governor appointed by the president of the United States. In other words, it's no easy task.

I'd personally want to see Texas split up. The state of Austin