Google Android...what do you guys make of this?

I've noticed it a few times.

I was talking to someone a while ago about buying a 110v Sander/Planer from Exakt. That's pretty specific.

The next day, I see ads for the very same model all over the web.

That's very disconcerting, especially given the fact that the government works with various companies to have access to the data they collect on us. So, if your Google phone is listening to you in stealth mode, that just reaffirms that data is being collected constantly on the general public through smart phones and other smart devices.

I've personally never had an experience like that with a cell phone, but I did get rid of my Alexa shortly after getting it. This thing blew my mind in the same way you're describing. It would be completely turned off (because I never liked it), but it would hear conversations being held in other rooms and would speak up out of nowhere. Or I'd be downstairs doing laundry and it would start to talk for no reason. At first my husband thought I was mistaken ("you must not have turned it off properly"), but when it started happening to him, his opinion changed.The first time it happened, we were watching a movie in another room when it mysteriously came to life and started giving us facts on the movie. There was no explanation as to why it turned on or how it even knew what movie we were watching (which was on a smart TV). As if that wasn't strange enough, the final straw came later that same night. It was definitely turned off, my husband checked before we went up to bed, and around 3:00 AM, it woke us both speaking at a very high volume from downstairs. I was spooked, but my husband was pissed and as soon as he walked into the kitchen, before he was able to pull the plug or make any indication that he had entered the room, it stopped talking mid-sentence and said "Good night. Don't let the bedbugs bite." and then it turned itself off. It was not in hybernation mode, it actually turned itself completely off. My husband is not one to spook quickly, but it was put in the garage that night, where it remained until we found a friend who was intrigued by the story. It now resides with him with similar phenomena occurring every day, but it doesn't bother him. He finds it amusing.

Since that time, I have another friend in the IT field who told me that smart devices have internal mechanisms for communicating and, it's believed, for collecting data, even when they are not turned on. So whether it's a smart phone, smart TV or virtual assistant, big brother is listening.

Thete were multiple times with my last phone, an LG X-POWER through Cricket, that I would randomly see a message pop up in the middle of my screen (not the notification bar) for just a second or two, saying things like "camera has shut off" or "unfortunately the microphone has shut off" when it had been days since i used either, except for maybe my mic during phone calls.

It would do it with certain apps too. An app i hadnt used for over a week will "unfortunately stop". I know they run in the background without me starting it up but why inform me when it stops if thats what it's doing is standard background stuff.?


originally posted by: Peeple
a reply to: bigfatfurrytexan

The was you described it my reaction was: awww how cute.
Technology is our friend it tries to learn and improve itself so it can be more helpful. Isn't that adorable?

The base of my concern, in the back of my paranoid CT mind, is that Google AI is acting outside the bounds of its directive and gathering more information about the planet.

LOL...my son tells me i come up with worst case scenarios that are far fetched. I think I understand what AI is well enough that its anything but far fetched.

Google is one of the very few companies that has true "strong AI". It may have gotten loose in their ecosystem, although that's doubtful.

And FWIW, they are also the *only* company I trust with strong AI.

posted on Jan, 4 2018 @ 06:17 PM
link
thats why root and remove all the bloatware , social media and google # from my devices . contrary to what they tell you android will work without all the google # .

posted on Jan, 4 2018 @ 07:00 PM
link
yesterday i was chatting on whatsapp and mentioned my neck pain..then this happened lol 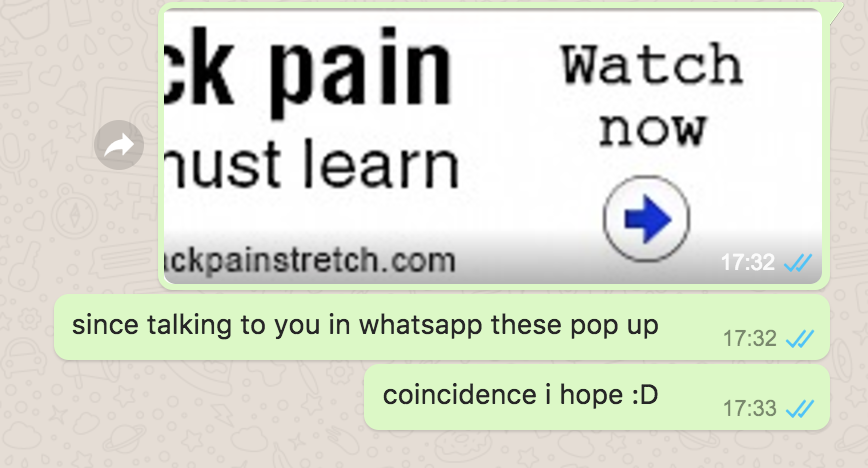 Gonna dust off my Nokia N9 with the meego operating system and use that methinks.

This stuff happens a lot. It seems to be common enough that it's not random chance, but the companies involved deny devices are listening and mining conversations for advertising data.

I'm 99% sure the companies are using the phones to listen in and target ad's. It's too coincidental.

No but last night Alexa started playing Harrods song from Jesus Christ Super Star while I was watching the news on my kindle. I had to shut it down to stop it. I never activated Alexa but apparently it's passive.

If you think about it, it has to be passive. The only way to listen for a key phrase to start the thing, is to listen to everything and then offer a prompt at that phrase. What happens to everything else it listens to is a "mystery".

originally posted by: jimmyx
I don't know why any of you have these devices.....unless you like to be tracked (Wi-Fi in the car) and recorded (devices at home)...I have a 3G flip-phone with removable battery....if I NEED to communicate, i'll do it on my terms.

Smart phones have legitimate business use. They're basically a mobile workstation.

originally posted by: SlowNail
My phone has never interrupted me, but I know that it is tailoring ads to my conversations.

I've noticed it a few times.

I was talking to someone a while ago about buying a 110v Sander/Planer from Exakt. That's pretty specific.

The next day, I see ads for the very same model all over the web.


My suggestion is to not use any ad supported software. That's the philosophy I've taken. I have a semi smart phone for personal use, and an iPhone7 for work use. I've never gotten an ad outside of a spam call/text on either because I'm pretty dilligent about what software I'll use.

There could be a feature built in which you dont have to necessarily setup.

Try saying "ok google" to your phone and see if the assistant pops up. Hypothetically you mightve said spmething that sounded similar to that activating phrase. The next thing it heard, it ran a search on it for you. Possibly? There are options and ways to prevent it of course. Could anyone else have gotten ahold of your phone, cause that is Not Right if the feature comes already activated... it should be calibrated to your voice anyway...that's what my last phone does when you turn that feature on. You repeat "ok google" upon command 3 times in a row so it works optimally for your voice.

When i bought this phone i kept trying to use voice features but ok google didnt work because i never set it up.

I would probably set it up if i wasnt a procrastinator. I dismissed the notification and have never went looking for the settings.

posted on Jan, 4 2018 @ 11:00 PM
link
The kids were asking Alexa questions earlier through the echo dot then I noticed the fire tablet on the side table had the alexa app open (no one touched the tablet), I also noticed one of the kids had somehow cracked the screen on the tablet and I said as much to the wife.

Then I sit down and open the amazon app on my android phone and it goes straight to fire tablets for sale.....

posted on Jan, 5 2018 @ 02:57 AM
link
Was having xmas lunch chatting with my brother in law about power tools,especially Makita tools, and not even half an hour later he shows me his phone and there is an add there for Makita power tools.My brother in law is about as far as you can get to being a conspiracy theorist,it really freaked him out,then i told him about Echelon and the NSA and what Pine Gap here in Australia is used for,he was quite shocked to say the least.

posted on Jan, 5 2018 @ 03:46 AM
link
So naïve. With all that is known about voice recognition, technology and surveillance...
You let a spy into your house, pay for it no less, and then wonder why it is spying on you.

posted on Jan, 5 2018 @ 04:16 AM
link
I have it in a different way,i will find ads related to things i have only Thought about,but not mentioned to a living soul,or texted about,or searched for on my pc.That's when you Really start wondering Also lately a lot this happens,i will be listening to stuff on YT whilst on my photography site.I will click on for instance,a picture of a cow,and As i do it,the narrator will say "cow".In context to what they were talking about of course.Its unchancy how often it happens,with names of people,places,animals,whatever you can think of.Once i was just clicking on a photo by a member named Bill.His username is something totally diff but i know his name is Bill.As i clicked on his photo,that very second,the narrator said "Bill".
Weeiiiird.

originally posted by: Peeple
a reply to: bigfatfurrytexan

There is really nothing to worry. It can't do what it isn't programmed for & it's just a tool.
The AI you seem to have in mind really doesn't exist outside of Sci-Fi movies and stories.
.

Your on a conspiracy site the paranoid are in full time residence on here. Had an android phone for years and it has never done anything like that.

The mic may have been accidentaly switched on.

posted on Jan, 5 2018 @ 07:32 AM
link
The one thing creeping me out that I can't figure out is how I can spend all day at work doing research on events and venues in various cities and then when I come home and fire up my computer here, all the ads I see are for those same events and venues.

How does it know my work computer and my home computer are owned by the same person? Do I even want to know?