posted on Jan, 3 2018 @ 01:33 AM
link
Happy New Year!
I was recently watching a video about the Travis Walton abduction. I had seen the video many years ago, but my idea's on the UFO mystery has evolved. So I'm looking at old information through new eyes with a larger imagination of what could be. In this video, www.youtube.com...

, Travis Walton provides a detailed explanation of what happened to him during his abduction. I find this intriguing because I cannot think of a similar story with as much detail of what the aliens looked like, or in the description of the ship. (Please share stories with this much detail - except Betty and Barney Hill) From his testimony, I have had some insights that are worthy of discussion.


#1. Mr. Walton states that when he awoke on the alien space craft, he had a particularly difficult time catching his breath. He mentions that the craft was cramped, small, and overly humid. He had difficulty lifting his arms, or standing up right. Due to his inability to get enough oxygen, or possibly due to another trauma, he experienced excruciating pain and double vision. As he broke away from the smaller humanoids, he roamed the small craft and encountered a large fair complexioned human that was wearing a glass helmet. (He makes mention later that these large humans were very powerful) As the Alien Human escorted him off the craft, and as he walked through a pressurized airlock, he noticed the temperature immediately cooled down, the pressure was normalized, and he could breathe normally.

#1 summation = Human Aliens share an atmosphere very similar to ours on Earth. Smaller humanoid aliens (Grey's) share qualities similar to our atmosphere, but different enough that Humans (and human aliens) need to wear a pressurized suit. The small humanoids must also wear a pressurized suit to accommodate Earth pressure and oxygen compositions, which gives them a pale grey appearance.

Point #2. The smaller Aliens were humanoid, but had large heads, distinctive eyes, small noses and ears. Look at the pictures that Travis Walton has had drawn with the assistance of artists: link.

#2 summation = These smaller humanoid aliens are very similar in shape, size, and description to what is coined as the Greys. I think that what he saw was the "Grey" aliens. However, there are some stark differences that are head scratchers.


#3 summation = Small humanoid aliens have similar eye anatomy to mammals of Earth. Travis Walton was disturbed enough by their stare that he had nightmares. But, he describes them to be mammalian in appearance, and not bug like in appearance. They simply wear eye protection, rimless sunglasses, that give the appearance of bug eyes.
Sunglass Lenses


Extrapolation from Travis Walton's' story is significant when you compare the details against the backdrop of other credible abduction stories. The Small Grey's are not exactly grey, and don't really have almond shaped bug eyes. If Mr. Walton's description is correct, this would suggest that the Grey's are misidentified in other stories. This is because they wear a pressure suit. Along with the pressure suit, they also wear eye protection. The eye protection makes the Grey's look insectoid, and free of emotion. These sunglasses, and their grey/pale pressurized suits, give an impression of a non-sympathetic bug-like humanoid species. I think this frightens us because as we cannot ascertain motive. If you think about it, we can usually tell when a dog, bear, cat, and gorilla are angry, hungry, mischievous, or sad. A Preying Mantis shows no satisfaction, fear, or sympathy in its face, and neither do reptiles. That's just a how I explain that piece to myself.

Summation of this post: I had too much time on my hands today. Also, Grey's are more humanoid in appearance than what is normally described due to a pressure suit that they must wear to accommodate our atmosphere.

The biggest question for me though: Who are these large human aliens. Are they another species, or are they just another race of humans? Are they the angels from the bible? If so, what are these little people? And why in the world would the little people need to perform procedures on us to figure out our innards? We are the same as their buddies, the human aliens. Ah,,, this is where it just doesn't make any sense.

I made this post mostly about my epiphany about the Grey's eyes and pressure suit. But please post your thoughts on anything related. And forgive the title of this post. I had a hard time thinking of an appropriate title.

posted on Jan, 3 2018 @ 02:02 AM
link
I have speculated that the "eyes" commonly reported could be some sort of heads-up display.
I have spoken to a woman who claims to have broke the induced paralysis enough to claw at one's eye.
She said the eye tore off and it was a more human type of eye.
For what that's worth.

posted on Jan, 3 2018 @ 02:03 AM
link
Might start with the first reported "sightings": Science Fiction, because stories with Greys are a wild goose chase over a waterfall.
en.wikipedia.org... 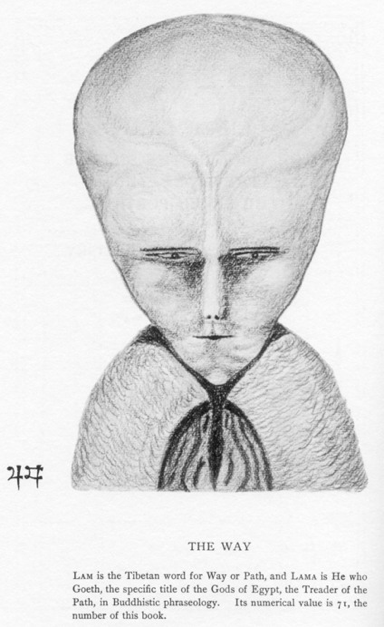 posted on Jan, 3 2018 @ 02:07 AM
link
The eyes very well may be exaggerated. Aleister Crowley's version of the Lam(era 1918) or what some say could be an alien or alien like being(instead of a Demon/God) had rather narrow eyes, though the head shape matched better to the greys.

originally posted by: IgnoranceIsntBlisss
Might start with the first reported "sightings": Science Fiction, because stories with Greys are a wild goose chase over a waterfall.
en.wikipedia.org...

That drawing was made by Aleister Crowley.

posted on Jan, 3 2018 @ 02:20 AM
link
Comparing Travis Walton's description to other descriptions, those large black oval eyes are just eye lenses that perform several functions, firstly protecting the aliens from our atmosphere. A few posts up someone said he thinks its a heads up display. I have seen other stories where they claim the eyes become an ambient red or white color.

It was described in scifi before that.

posted on Jan, 3 2018 @ 02:44 AM
link
Some of the little aliens are described as having blue skin, stocky short bodies and wide noses and faces (an appearance that looks cross between a Chinese person and an African). I know someone who woke up and saw three of these in his room. They walked in unison coming towards him. He blacked out and woke up late the next afternoon. A famous celebrity or UFOlogists ( I forget which sorry) also saw these small blue aliens

What's a "heads up display"?

That's like google glasses. Augmented reality. When you look out and see land, grids and information overlay it.
A more futuristic example of a Head's Up Display would be what the Predator used in the movie Predator.

I have a family member who apprehensively told me a story about an alien abduction/encounter when she was a kid. She asked that I not tell anyone because she didn't want to be seen as crazy or a liar.

I'll skip the whole story, but I do want to point out that her account of what the eyes look like is very similar to Travis Walton's. For me that is beyond fascinating.

I agree. This is beyond fascinating. But, I think that once we have the answers to our questions,,, we won't be happy with the answers.

I currently live in Hawaii. Before I came here, I had a wide eyed child's expectation of what it would be like. After living here for a few years, I cannot wait to get away and never come back. It has been nothing like my original expectation. However, I can see why some find it a decent vacation.
On the same note, once we have the information we are seeking, we will probably not be too mesmerized with the technologies or their culture.

More important to me is WHY ARE THEY HERE? What is their motive? It can't be good for us. It just cannot be a good deal for us.

I'll give an example: The United States is in Afghanistan. We tell the people of Afghanistan that we are there to help their country become a burgeoning democracy, and that they will bask in the riches just like Americans.
But the President of Afghanistan knows better. We are there to get our hands on the much needed minerals their country is blessed with. We use these minerals to manufacture everything from computers to high end military weaponry. China and Russia have been there since before the war. We want to take that resource away from them.
If the Afghan President tells his people the true reason why we are there, what could the Afghan people do to get rid of us? Nothing. And wouldn't we just replace the President? Who would win that war of propaganda and words; the President or the US? Of course our government would win that war. We'd just install some other willing participant. And we would continue to deplete their country of riches and resources that they never knew they had or needed. (I use that as a fictitious, but plausible, example to get across my point.)

I'm sure the Alien Humanoids have a good reason for being here. And I'm also pretty sure their good reason is NOT good for us. Anyways, just my thoughts.

What's a "heads up display"?

What an F35 pilot sees on the insides of their helmet.. so digital imagery overlayed on top of the real life background..

posted on Jan, 3 2018 @ 05:20 AM
link
There's a video of a supposed autopsy of a dead alien where the black lenses were removed from the eyes. No idea if it's a legit video or not but it's interesting in relation to this thread.
The lense removal starts at about 10:23:

originally posted by: FingerMan
I'm sure the Alien Humanoids have a good reason for being here. And I'm also pretty sure their good reason is NOT good for us. Anyways, just my thoughts.

I had a random thought while lying in bed the other night. Some people believe that certain humans have specific purposes for their lives here on Earth. What if abductions are carried out as a means to repairing a person's body so that they continue to live until their purpose is complete? For example, say a person is intended to live for another 20 years, but they happen to have a likely-fatal cancer that they don't yet know about... Abduction. Done. Now the cancer is gone and they live, none the wiser.
In reading through various near death experiences, this life purpose thing is rather common - people dying and being sent back because they haven't achieved their purpose yet. All factors considered, there almost has to be some sort of oversight and occasional intervention to maintain such a system.

Ultimately I have no idea, but it's an interesting thought.

originally posted by: skunkape23
I have speculated that the "eyes" commonly reported could be some sort of heads-up display.
I have spoken to a woman who claims to have broke the induced paralysis enough to claw at one's eye.
She said the eye tore off and it was a more human type of eye.
For what that's worth.

Thats fascinating considering during the Alien Autopsy video, they remove two black eye 'coverings' from the figure, too. :45 seconds into here:

What if the real aliens are only hiding their true forms and are mostly posing as greys?