Just try to imagine everything is a lie.. what will this do with your outlook on...everything?

Yesterday I watched this reward winning YT presentation and not very much later watched the three latest Star Trek movies. Those Star Trek movies have always felt to me as a realistic glims into our future. The hope for a united peaceful human race on our planet which is suported by advanced technology and interaction with other extraterrestrial intelligent species. The eternal possibillity to evolve as a race in the endless vastnes of the universe. It has always felt we have something to look and work forward to....a kind of hope and optimism for us all.

But as openminded as I am and aware that there are indications and facts enough that there are powerful liers, murderers and corruptors at the highest places in society I couldn't help it considering that the common hard working people on this planet are fed a lie about what our real situation is in what we believe is our universe.

I do not say it is so...but just try to imagine that many of what we consider the most outragous conspiracies are the truth. Space is not what we think it is... for some reason we can not ever go further than low orbit. A voyage to the Moon or Mars...or anywhere else is impossible. The planet is not a sphere..

It comes down to that those who control the economies in the world have decided to take it upon them to create a false reality for the rest of us. The truth is that what we think is real is all theatre.. Wars are started to reduce the population, to make money, to alter the world economy into a better model. The difference in political systems are all social experiments to figure out what is best for a wold government. And so on.. It comes down to finding ways to give humanity hope for a future and growth while the truth can cause depression.

It is a long watch but it is clear something is going on.. If so, I wonder what argument those "leaders" use to convince scientist to lie and play along. I am sure it can not just be money..

What are your thoughts..?

Those Star Trek movies have always felt to me as a realistic glims into our future.

There is nothing realistic bout our future when it comes to Star Trek.

It's nothing but American politics in space with cool FX.

The thing about star trek is they say they are peaceful in the future; advanced, benign, non interference protocols and all... but in reality, the Enterprise is named after an aircraft carrier, is armed to the teeth and goes about in episode after episode meddling and interfering in other planets affairs.

Kind of like the uS does now. We're on a humanitarian mission to save the world...

In reality to go where we have always gone before; to meddle, invade and conquer for resources, territory and power.

I take it that you expect a dystopia...a grey, depressing fascist world? Or maybe not a world at all.. you must have an idea what will our future be. Not so optimistic I guess. What do you think is not realistic about a "Star Trek world"" ? Do not ask me how this ecomomy will work.. I think even the writers of the films do not know..and do not care to know.

I hear you.. even in the future they are part of the "dark force". But just assume that they are really there to discover new worlds and boldly go where no one has gone before... a peaceful 5 year mission..

I don't know what I expect.

I take it that you expect a distopia...a grey, depressing fascist world? 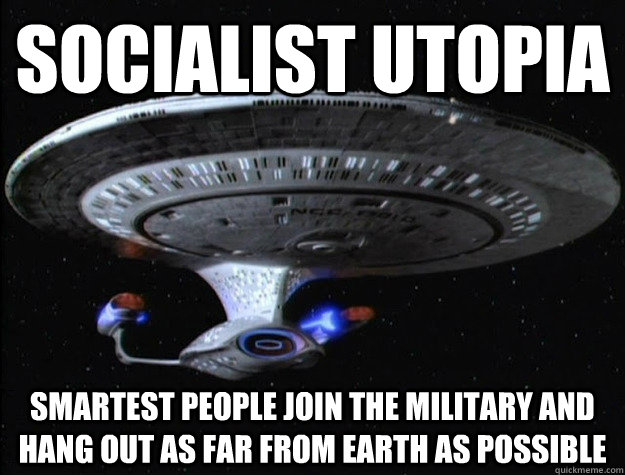 originally posted by: MOMof3
a reply to: intrptr

Colonize? We need to destroy Mars.

Yes I see what you mean..It can go any direction. But that is not what I ask in the OP. What I want you to do is to assume that either of your expectations will be our future... but the hard truth is that this will never happen. Because those fantasies are just that.. The reality is that we are given false ideas..possiblities. Reality is that we are controlled and given the illusion that all what we do is for the right reason.. while the real reason is to keep TPTB in power and help them to continue the lie.


What I want you to do is to assume that either of your expectations will be our future..

Assumption is the mother of all eff ups.

Going by what we know.

The more things change the more they stay the same.

The answer is simple.

posted on Jan, 1 2018 @ 12:44 PM
link
It might be an unpopular opinion here on ATS, but I don’t think the Earth is flat. I think that mine is a legitimate opinion based on observation, and dare I say it, science.

It seems to me that flat-Earthers are the ones trying to cover up the truth, although I don’t think there is any danger of them taking over the world anytime soon. I think a lot of them believe the Earth is flat, and they are free to believe what they like I suppose. They could be holdovers from an earlier time.

A long time ago, Christians thought our world was flat and that Earth was the center of the universe - even the sun orbited around us! This belief was common sense based on what was known at the time.

When facts and science proved otherwise, it seemed threatening to those who thought it would threaten Order in the world. But luckily, society evolved.

People who cling to the old beliefs that the world was flat feared change. But in reality, the best way to know God is through science and the accurate study of the universe He created.

posted on Jan, 1 2018 @ 04:38 PM
link
One question I would like answered by the flat earth crowd is what shape do they think the earth is?

And what exactly is going to stop all of the oceans water from running off the side? 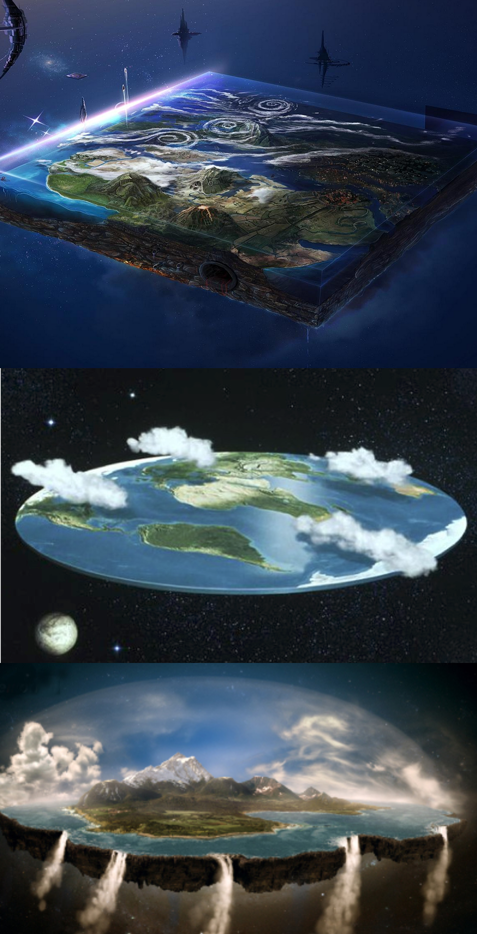 The leading flat-earther theory holds that Earth is a disc with the Arctic Circle in the center and Antarctica, a 150-foot-tall wall of ice, around the rim. NASA employees, they say, guard this ice wall to prevent people from climbing over and falling off the disc.


So we have a 150-foot-tall wall of ice at the edge of the world and not ONE single picture of it yet?

Yep sure, it must be black ice that blends in with space, so we can't see it or photograph it.

I think that I have not been precise enough with formulating what I want in the OP....

It is all about trying to picture how confined we as a species have always been ...and always will be. We are given the illusion to be free but reality is that we are controlled and steered. There is no indefinite space, there is no endless growth, there is no freedom.. we are given the illusion. I do not say it is so.... All I am asking is to IMAGINE this is our reality and what does it make you feel...think about the purpose of our excistance?

Bit difficult I know but.. would it be worth the effort to feed us the lie. Why do you think "they" decided it is better to force feed us those lies? What would happen if they wouldn't...couldn't....or had not?