originally posted by: MOMof3
a reply to: Antipathy17

The political system we have had for 3 years in both houses and state legislatures, are republicans. Have you been asleep the last three years? Why doesn’t the pure white snowflake party fix things instead Of saying look over there.

Once the Republicans control everything the narrative changes to "Two Party's are one in the same." This way the Republicans have someone to blame when another 2008 banking crisis rolls around.

Even when the Democrats are in the minority they have magic powers.

I'm speaking about the policy makers in that vein. The Party insiders that set the agendas. The cronies. Etc.

The regular people, very few of us get all of this, for now o only see the surface trauma stuff when peering at se the border.

Then I have some special terms such as "Team Democrat Talking Points" for those 'other sorts of people', or as a ribbing depends.

Wow, if true, the rationale of making a deal with a drug devil is the story of the century. Multiple Admins both Republican and Democrat involved.
edit on 30-12-2017 by pavil because: (no reason given)

And it was very smart of you to publish this content as an ebook before posting it here.

I applaud the effort, but unless you start with Ronald Reagan you aren't coming anywhere near the truth.

This is something I've studied for years and years. And the originator of the hell that is the modern war on drugs being absent is quite suspicious.

Thanks! This piece today is one of endless stories within the diabolical patterns in the Treatise.

You missed my first thread the other day. I take it all the way back to WW2 1820, and nobody is spared. Here.

The Reagan family is no longer a threat so I dont put much energy ever towards him. Then there's the part where this actor who won POTUS, the Ruling Establishment supposedly made him take Bush on as VP, then he tried to buck the system go after the IRS the Fed etc, and CIA Drug Kingpin Bush's apparent assassination attempt on him nearly succeeded... its hard not to see Reagan as but a Patsy POTUS from that point. While with WOD this stuff goes back way before him. He really was a true believer in the anti-Communist takeover thing though. Everybody was. The CIA+MIC made sure of all that. Hell they wouldnt even nod that USSR might be failing until after it did! And as soon as it did here came their OBL creature to save the drug empire. I dont know that Reagan really knew knew about the Contra drugs until about when everyone else did, but I have absolutely no doubts whatsoever Bush was all up in them guts, so my anti-hypocrisy slant isn't all off the charts like it is with Sr. Sr. was seriously one of the most evil diabolical hypocritical POS in the history of our citizenry. Even Jr. culd hardly begin to stack up. And to think The Machine thought it'd have US voting for Jeb vs. Hillary last year.

I haven't really been looking at ATS that much for the past week, so I guess I missed it. I'll check it out.

We need to get the CIA out of drug running in this country.

The CIA needs to be disbanded.

Thats what Ron paul said in '08 and the Two Party + MSM System as one annihilated him during the Primary's. He coudl have beaten Obama if Fox etc had his back, but they jumped on the grenade to keep the Evil Empire rolling. Then Insane McCain became "a Democrat" and the RNC followed him and Al Qaeda into Syria.
edit on 30-12-2017 by IgnoranceIsntBlisss because: (no reason given)

Yeah i must say, when I first saw he was about sticking around in Afghanistan, which came right after that airfield bombing snafu, and then all the Korea saber rattling, I've been on a hair trigger to initiate a brutal campaign... BUT him being Mr. Negotiator I've been critiquing the NK rabble around here but have been trying lets see maybe its just method to madness Trump's game...

So then in wrapping up the report I had to scorecard Trump's foreign & domestic WOD happenings and was blown away when I found the one where they started bombing the Afghan drugs labs, and have like 500 more lines up they intend to wipe them all out.

This is a sea change development, that I hadnt seen anyone post about. So I had to go and do a rare cheerleading post in this BS thread last night to raise the banner that the Al Qaeda supply chain is going down:


originally posted by: IgnoranceIsntBlisss
She's a war criminal traitor who partnered with Al Qaeda (who attacked the WTC with airplanes full of passengers) the opium heroin drug running international narcoterrorism cartel, to overthrow the Syrian government, and caused the deaths of at least 480,000 people. 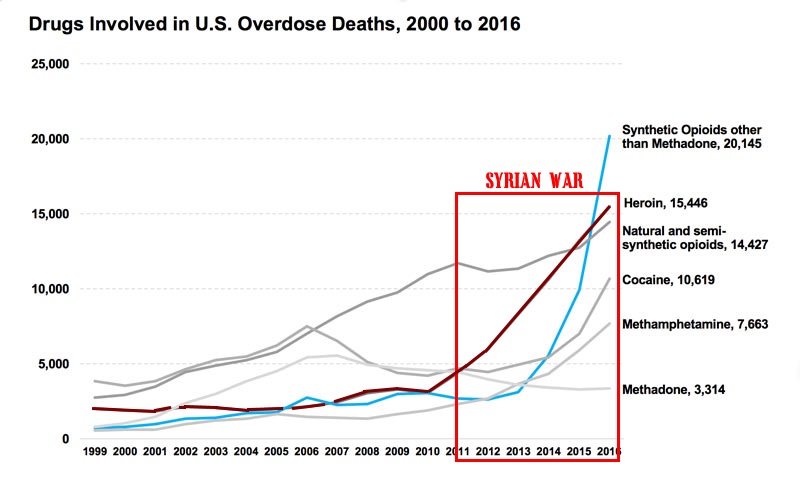 originally posted by: dfnj2015
But what difference does it make anyway. After the 2016 all the liberal Democrats have been kicked out office. Republicans control every level of the government from local to federal to the presidency to the judges. What more do you want?

What would make you think I want all Republican's running everything?

originally posted by: dfnj2015
But what difference does it make anyway. After the 2016 all the liberal Democrats have been kicked out office.

Back in the day 10 years ago liberal used to like me, even though I was Ron Paul type. I still champoin Dennis Kucinch even though I dont agree with him on a list of things. YOu see we could all get along the true Truth, Justice, Anti-War, 9/11 Truther Typees back then. It was all thes ame fight. Now its just fight about Identity. Nazi Germany BS it really is. Now Party has gone all gone identity politickal, the masses following along, and with my Individuality Extremism I'm The Devil. I can name names in this very site still active that used to have my back in these sorts of threads, and now they scold me across the site and wont touch my threads just so they wont get bumped. Not even when I'm carrying the torch they supposedly carry, like here today, although there have been some exceptions and I'm greatful for that.

posted on Dec, 31 2017 @ 05:52 AM
link
This crap just makes me sick...and sad that our gov't does these things. I have to imagine the Russian gov't , the Chinese and probably every gov't on the planet does these sort of things.

How the hell are us little people supposed to affect any change or hope for world peace with this stuff going on. Makes me just want to do what affects me and my family for the better.


. According to an analysis of the DCS reports, some $1 billion in defense hardware was approved for export to Mexico via private U.S. companies between fiscal year 2004 and fiscal year 2007

You think these "private companies" are just idk if "shell" co. is the right word, but set up by the CIA. If the US congress approved the sales of military weapons, why would we have to pay private companies to be a middleman? Other than to make somebody rich?

It can't be to protect the US gov't from blame, the approved the sales in the first place. Does the US gov't routinely sell military hardware to private individuals? like is there a catalog somewhere??? lol.

Really you need to open your eyes. What is the driving force behind the republicans / democrats. It an illusion to make you disagree overt very small increments of difference.

For the first time every you have the ability to look behind the curtain. Look! Whilst the opportunity is there.

Excellent summary of what the "war on drugs" really boils down to: Nothing more than a power struggle over maybe the most valuably commodity in the world.

Some drug lords just happen to have bigger armies than the rest.

originally posted by: MOMof3
a reply to: purplemer

They're all generally puppets whom are spoonfed to us by TPTB. The ones whom arent, the Two Party + MSM System work together as one to squash like bugs.

It is known:
DARK ELECTIONEERING: How the DNC+MSM+RNC Work Together In Lockstep To Subvert The Nation
edit on 31-12-2017 by IgnoranceIsntBlisss because: (no reason given)

well please remind him he is history because he keeps running around acting like he is the potus like that stubborn turd that keeps hanging around when you flush. but seriously bush, cheney, hillary, and obama all need to be tried at the hague for crimes against humanity.