originally posted by: mangust69
she could use the money of Ukrainian fascists, the Kiev junta number 1 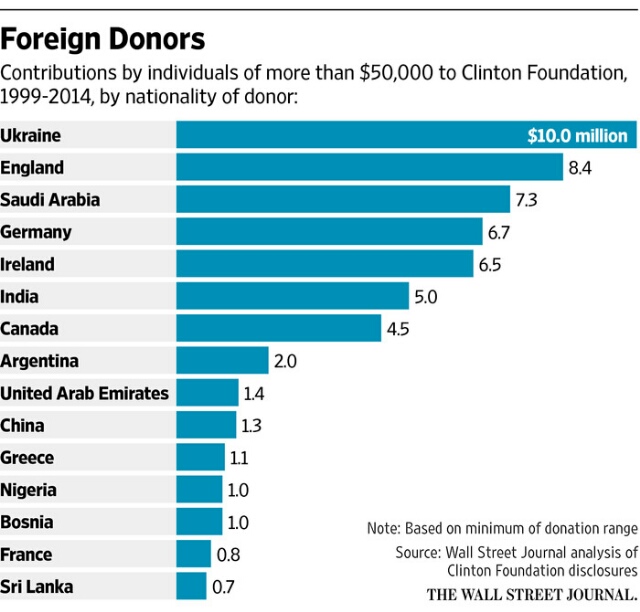 A convenient way to bypass US FEC laws on foreign donations to political candidates in the US.


originally posted by: MOMof3
Well, lock her up.

A republican majority of law makers, a republican president, and still can't get the job done.


You know why that is?
There are a whole lot of dirty politicians on both sides of the aisle that are tied up in this.

The only hope would be for a data dump that shows the world all of the warts that we have on our leadership.

Indeed. Most republicans are just as corrupt and nasty as democrats, just in their own ways. Corruption is the gasoline if power politics is the engine. There are very very few honorable, decent people in national politics.

Of course, Clinton may be the most corrupt politician in the history of our nation, and that is saying something.
edit on 3-11-2017 by pirhanna because: (no reason given)

posted on Nov, 3 2017 @ 01:45 AM
link
Here`s Hannity covering Clinton`s rigging of the primary election, Obama`s uranium one sale and the Clinton financed fake dossier on Trump.


He said the yellow cake was sold to a trucking company in Canada with 25% of it made its way to Europe and Asia.

I`d hate for this stuff to find its way back into western countries as an ISIS present.

originally posted by: Phoenix
a reply to: theantediluvian

Some of us Trump supporters (well most, if not, all) did say the "Muh Russia" meme would backfire bigly - it will and now has.


Yeah, it hasn't backfired "biggly" at all but this thread is clear evidence that a lot of Trump supporters are not seeing the forest for the trees.

The consensus is forming on both sides of the aisle that Manafort has been promoting Russian interests since 2004-5, and specifically started getting paid a considerable amount of money in 2006 for the explicit purposes of promoting Putin's agenda and lasting *at least* until 2009 but most likely longer and quite possibly right up through 2016.

In fact, a certain faction of Trumpdom is really counting on Manafort being Putin's conduit to influencing US politics through 2014 with ECFMU. So that they can then claim that Podesta Group wasn't just lobbying for Ukraine without being registered to do so but providing Russian influence over Hillary Clinton.

That all aside from his dozen years of Yanukovych/PoR being his primary client. Yanukovych being Putin's boy in Ukraine. That work didn't stop when Yanukovych was removed from office and fled to Russia. Manafort, Gates et al continued to work for PoR at least through 2014-15. I'll have to go back and read through the indictment again to see if there's any hint but it's quite possible he never actually severed ties.

Show of hands — who thinks Manafort was a Russian operative from 2004/5 through 2014, continued on his Ukrainian work for the pro-Kremlin PoR through 2015 and then just up and severed all those ties just in time to join the Trump campaign in March of 2016? And when I say Manafort, I really mean Manafort and Gates.

So where does that leave Trump supporters, exactly?

And let's not forget that Manafort isn't just Stone's buddy of 40 years but a long time friend of Tom Barrack, one of Donald Trump's closest friends. As I mentioned, Barrack loaned Manafort a mill and a half in 2004 as he was just getting involved with Deripaska, Akhmetov, PoR, Russia, etc. In fact, Manafort quite possibly paid Barrack with Putin-connected money.

Let's also not forget that though Manafort stepped down in August, his literal partner in crime, Rick Gates, didn't go anywhere. He stayed around for the campaign, the transition, was to be part of AFP along with the other members of Team Trump like Bossie who weren't getting jobs in the administration. Then in March, Rick Gates went to work for Barrack. He's been seen visiting the WH on more than one occasion since the inauguration.

So just mull that over a bit. Turn that around a few times in your brain and tell me how absolutely *any* of that looks good for Trump or for your misguided notion of vindication?

originally posted by: xuenchen
She smells the indictments yet to be unsealed.

I hear money laundering is in there too.

You didn't link your source (it's TownHall) but I've just watched the interview via the ABC News link and both of the significant points of your OP are false.

Also, she of course never said, "collusion is not illegal!" She said that opposition research isn't illegal. You're characterizing the Steele Dossier as "collusion" as are most Trump supporters.

Though of course, you also argued that direct coordination between the Trump campaign and officials of the Russian government, operating with the approval and at the behest of the Kremlin, was not collusion when it came to Don Jr thinking he was getting dirt as part of "Russia and the Russian government's effort to assist Mr. Trump."


You know what Don Jr was thinking Can you do that all the time, or was it just a one time thing?


originally posted by: MOMof3
Well, lock her up.

A republican majority of law makers, a republican president, and still can't get the job done.


You know why that is?
There are a whole lot of dirty politicians on both sides of the aisle that are tied up in this.

The only hope would be for a data dump that shows the world all of the warts that we have on our leadership.

As an Independent, this is something I've known for a very long time.

I don't care what party they're from. 30-40 years in office BREEDS corruption.

Term Limits! The only thing that will stop it.

Got a tape of her denying this?

Keep it up! At this rate, you boneheads will keep driving that bus right off the cliff. 2020 campaign slogan "we have better hair than Trump!"

Bush did the same for me from the opposite direction.

posted on Nov, 3 2017 @ 10:36 AM
link
Right. I was raised republican. I had my doubts already, but Bush and the Iraq War sealed my disillusionment with the Repiblicans. So then, I was marginally a leftist democrat until 2016.


I`d hate for this stuff to find its way back into western countries as an ISIS present.

This is an horrific thought.

Obama was the worst thing the American people ever did to themselves. Americans were never put first. It was always about their own coffers and their Party coffers, and their international cabal coffers.

Important: There is a reason Barrack Hussein Obama never appointed a permanent Inspector General for his State Department under Hillary Rodham Clinton.

What do Inspectors General do?

A U.S. federal inspector general (IG) is the head of an independent, non-partisan organization established within each executive branch agency assigned to audit the agency’s operation in order to discover and investigate cases of misconduct, waste, fraud and other abuse of government procedures occurring within the agency.

Video of her admitting it.

See link in the OP.

Based on your mental fantasy?

Even Nancy Pelosi has taken a sudden turn and is hushing
The Dems from this crazy talk.

originally posted by: Steak
Is this the end of the DNC?

Put her in a cell with Debbie Wasserman Schultz. We will have a corrupt system until these people realize they are not above the law.

Wow this is getting interesting!