posted on Nov, 2 2017 @ 01:14 AM
link
Random thought has popped in my mind the other day while talking about the possibility of a reboot of " back to the future" so at the end of the third movie doc tells marty to destroy the time machine whichch he did... Indirectly. But then here comes doc with his family in a steam powered time machine....
What the hell?

Captain Kirk violated The Prime Directive at will as well.

If Doc Brown decides to Kobiashi Maru the timeline that makes him a hero in the history books.

posted on Nov, 2 2017 @ 03:00 AM
link
I viewed that as the Doc's love of science and the challenge of remaking a time machine using what he could find in that past he decided to stay in. Naturally while all the drama was going on, he thought time machines too dangerous. But after some down time and a desire to show your wife and kids the world...

If time 'travel' was possible, events would be all screwy.

Films like Butterfly Effect and Donny Darko come to mind.

Its like this. As soon as you invent an internet, hacking is born. People will break into and steal from bank vaults, file cabinets and computers, no matter how much security is added on.

Same goes with time machines. If they existed in the future they would be hacked too, and events would be all jumbled all the time, as far back as events go. Some people would hack time just for the ugly fun of it.

Imagine the Hillary Clintons of the future, coming back here, desperate to win an election. Click whir buzz, no problem. But it doesn't happen. So the rules about time must be fixed like others; law of gravity, speed of light, etc.


From our perspective in 3D land, Its allowed to see the future, but not alter it.

posted on Nov, 2 2017 @ 06:09 AM
link
Maybe he wanted the delorean destroyed because he could not control it and anyone could use it, like old biff, perhaps the train could only be activated by him.

posted on Nov, 2 2017 @ 07:58 AM
link
In the end, Doc reveals his revelation that each individuals fate is not a static story that we are unable to change but they are each malleable and independent of any timeline(s) that the individual may experience. Our free will beats out destiny.

And it turns out that the space time continuum doesn't care what we do.

if you haven't watched "rick and morty", you probably should.

It’s easy to overlook them in a family movie. But the Doc has some flawed character traits that should be pointed out.

When he attempts to harness the power of nature and use the lightning strike on the Clock Tower he is approached by a police officer. The full scene was edited in the first movie. But the surviving footage clearly shows Doc bribing a police officer. The scene ends with the officer alluding to the fact that the Doc set something on fire in the past.

He is of course talking about the ‘Brown’ Mansion. In 1985 the Doc inhabits, the only thing left at the time, the garage. Doc’s land having long been sold off to a Burger chain.

However we know from the, not so, subtle hints in the news clippings Doc keeps pinned to his wall that the home was destroyed. The clip from 1962 mentions “Brown Estate Sold To Developers: Bankrupt Inventor Sells Off 135 Prime Acres”. Whether he actually set the building on fire for the insurance money is only hinted at in the scene above. But Doc Brown certainly made money from selling the land off to a burger restaurant chain. He spent a lot of the cash collecting clocks it seems. 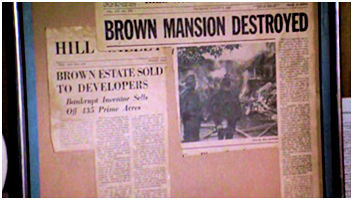 The Doc also has a very large collection of bank notes from various time periods. 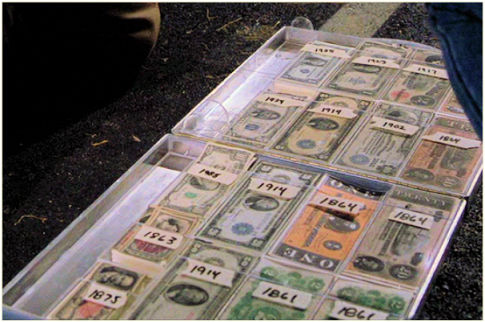 The collection is shown in BTTF2. But how he obtained such a collection is not mentioned. As Doc is talking about destroying the time machine in 2015, he says "My only regret is that I will never get a chance to visit my favourite historical era; the Old West". You can only speculate as to how he accumulated all those notes with that in mind. Essential as those notes may be for the intrepid time traveller.

Worse still is Doc’s successful attempt to obtain plutonium from a bunch of Libyan terrorists. He tells them he will build them a nuclear bomb from the stolen plutonium! Thankfully he was only using it to fuel his time machine. But it would surely put him on the FBI watch list?

Then we have his willingness to use the 2015 version (at least in the BTTF universe) of Rohypnol on Marty’s girlfriend Jennifer. It seems the Doc has an ‘E Z Sleep’ device. Something which obviously sends people to sleep in seconds. So he uses it on poor Jennifer then leaves her unconscious, hidden in a back alley!

In the third and final instalment Doc Brown even ruins a whole railroad and steam train in efforts to get Marty back to 1985. Don’t forget that the Doc’s best and only friend is a teenage schoolboy as well!

Perhaps his character traits are influenced by the fact that he was committed back in the 1960s? BTTF2’s alternate time line shows a 1983 newspaper clip with the headline “Emmett Brown Committed Crackpot Inventor Declared Legally Insane”. It also reports Richard Nixon is seeking a 5th term and vowing to end the Vietnam war by 1985. Jeez!!! 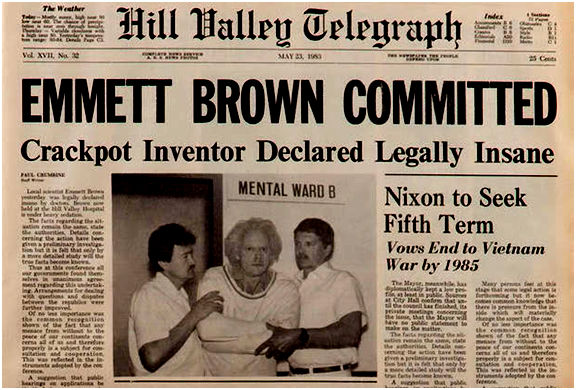 See what i mean.

Yeah. I think that was the whole point. Doc gets hit with a bout of conscience but left to his own devices in the 1860's boredom ultimately gave way and his desire to tinker took over. It's actually a very human ending since it shows that even world changing decisions require a commitment that even the heroes of the story may not be able to keep up with.

Imagine the Hillary Clintons of the future, coming back here, desperate to win an election. Click whir buzz, no problem. But it doesn't happen. So the rules about time must be fixed like others; law of gravity, speed of light, etc.

Only one movie has dared to tackle this (well, maybe a few others)....

Seriously though, you'd have to imagine that there would be Temporal Police.


However, I have a different theory, and it's basically similar to what was described in the second movie. Alternate timelines. The idea is, if you make a change, this then creates an altered timeline that essentially, exists in a different universe than the original, non-altered timeline. So, if this was the case, it makes an easy out for time travel movies, as you could simply find a PATHWAY back to your origin timeline instead of the one you created from the change. In the BTTF movies though, this altered timeline WASN'T in another universe, hence his need to put things "right" before returning....

The sticky part of this though, is time marched on (in your origin timeline) while you were visiting the past, so when you return to your origin time, you now create another altered timeline. Of course, this may be of little consequence to you (and the story), but a caveat nonetheless.